BACK TO ALL NEWS
Currently reading: Chevrolet Corvette C8 Stingray to launch in UK in October
UP NEXT
New 2022 Honda Civic hatchback goes hybrid-only

Chevrolet Corvette C8 Stingray to launch in UK in October

The new Chevrolet C8 Corvette Stingray will go on sale in the UK in October in coupé and convertible guises, with prices starting from £81,000. It will be the first Corvette in the model's 67-year history to officially be sold in right-hand-drive form.

The C8 will first reach the UK in Launch Edition trim with 16 different options split equally between the coupé and convertible versions. Prices will start from £81,700 and £87,110 respectively. All models sold here will be equipped with the Z51 performance package and highly specified 2LT trim as standard.

That means all European cars will gain a number of hardware upgrades over the base-spec US car, including manually adjustable suspension, larger brake discs, an electronic limited-slip differential, a shorter axle ratio, a performance exhaust system, Michelin Pilot Sport 4S tyres and an aerodynamically enhancing bodykit.

The Launch Edition cars will also feature the higher 3LT trim and will include additional carbon styling elements on the spoiler, mirror, wheels and roof, along with upgraded seats. They will also benefit from a magnetic ride control system and bespoke design details that set them apart from the standard models. A front suspension lift, which raises the clearance of the car by 50mm, will be offered as an option. 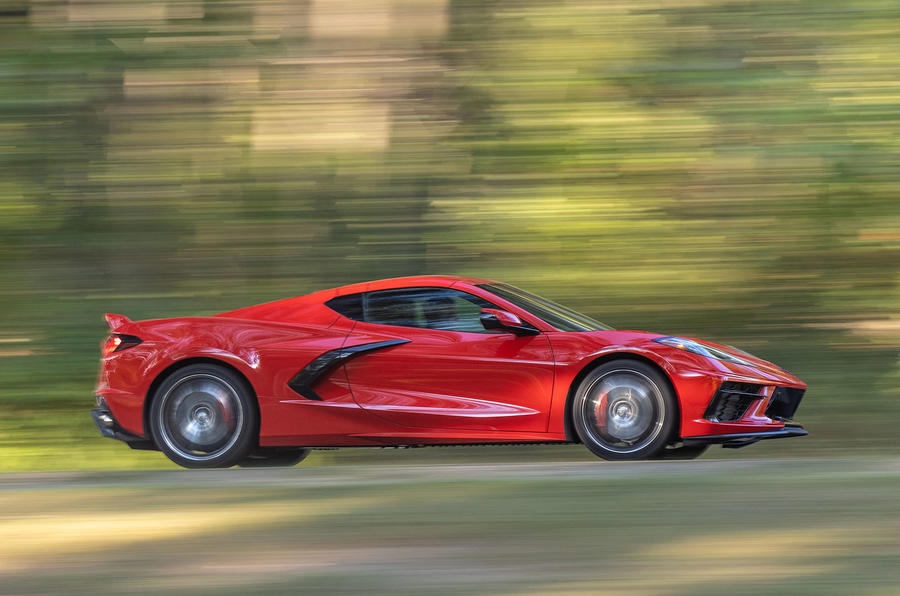 The new C8 features a mid-engine layout – the first time for a Corvette – in a bid to take on European rivals such as Porsche and Ferrari.

Since the original version of the two-seater was launched in 1953, Corvettes have featured a front-engined, rear-drive layout – but the 495bhp 6.2-litre V8 in the new C8 machine is mounted behind the driver for the first time.

Mark Reuss, president of Chevrolet parent firm General Motors, said at last year's launch: “The traditional front-engined vehicle reached its limits of performance, necessitating the new layout.” He added: “In terms of comfort and fun, it still looks and feels like a Corvette, but drives better than any vehicle in Corvette history.”

The entry-level version of the new machine is dubbed Stingray, reviving a badge first used in 1963, and is able to cover 0-60mph in under three seconds, making it the fastest base-level Corvette yet. More powerful variants are due to follow. 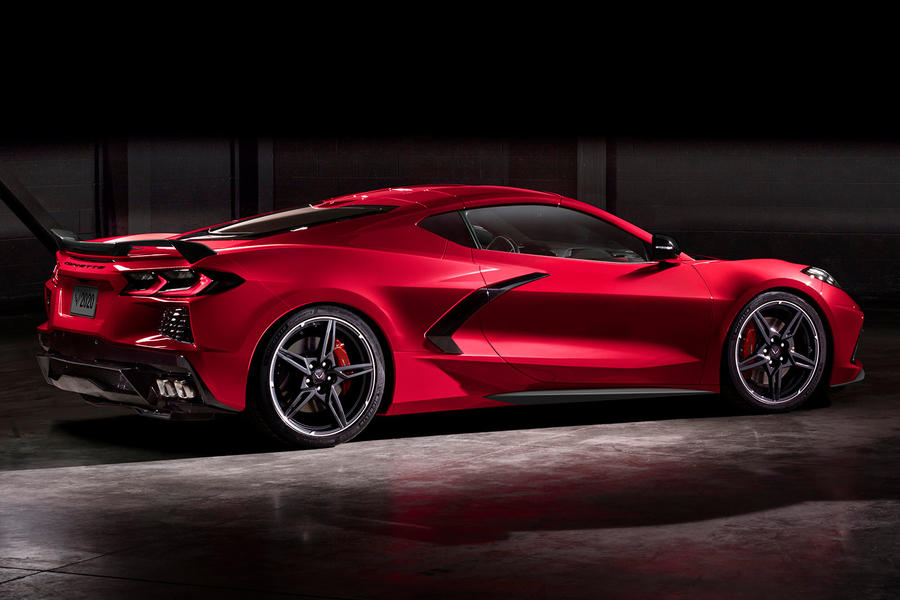 Switching to a mid-engine layout has increased the length of the new model by 137mm to 4630mm, with the wheelbase stretched to 2723mm. It is 1933mm wide, 56mm wider than the previous C7 model, although at 1234mm it is marginally lower. The new Corvette weighs 1527kg, 166kg more than previously.

While retaining some familiar design cues, the new Corvette has a more ‘global’ look due to the new layout, with echoes of recent two-seat McLaren and Ferrari machines. Chevrolet claims a more ‘driver-centric’ interior design, with the shorter bonnet bringing increased visibility.

When it was introduced in 1953, the original Corvette was a striking alternative to the hefty behemoths that dominated American roads, with its lightweight glassfibre body and two-seat cabin. Zora Arkus-Duntov, considered the ‘father’ of the Corvette, had long pushed for a mid-engine layout, but while several prototypes were built, this is the first production version to make the switch.

To underscore the switch, the C8 Corvette features a glass cover to highlight its engine, which produces 40bhp more than in the previous model. It also develops 470lb ft of torque, 10lb ft more than previously. 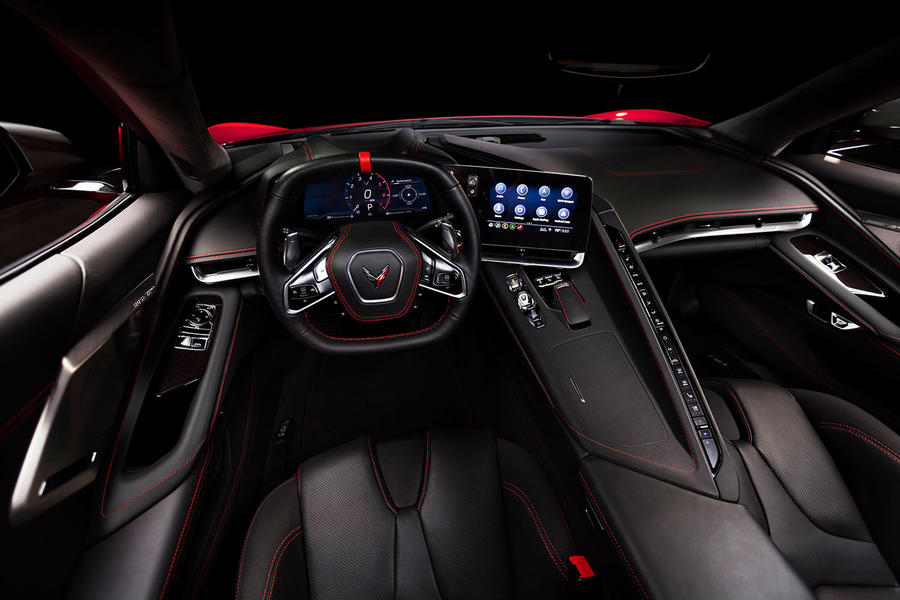 It will also be the first Corvette since the sports car's early years to forego a manual gearbox in favour of an all-new eight-speed dual-clutch transmission with paddle shifters. It includes a new feature called double-paddle de-clutch, which allows the driver to decouple the clutch for greater manual control.

The gearshifter is electronically linked to the transmission, freeing up space, and an array of key controls are lined up, Porsche-style, along the edge of the centre console. A new customisable display is visible through the squared-off steering wheel, while the infotainment screen is now angled towards the driver.

As with the C7, the new C8 Stingray features Magnetic Ride Control, which uses a special, magnetically sensitive fluid that allows the suspension dampers to be quickly adjusted. A performance traction management system is also available, with an electronic limited-slip differential standard on the entry-level car.

A front splitter and open two-piece rear spoiler work together to generate as much as 181kg of downforce under aggressive cornering. 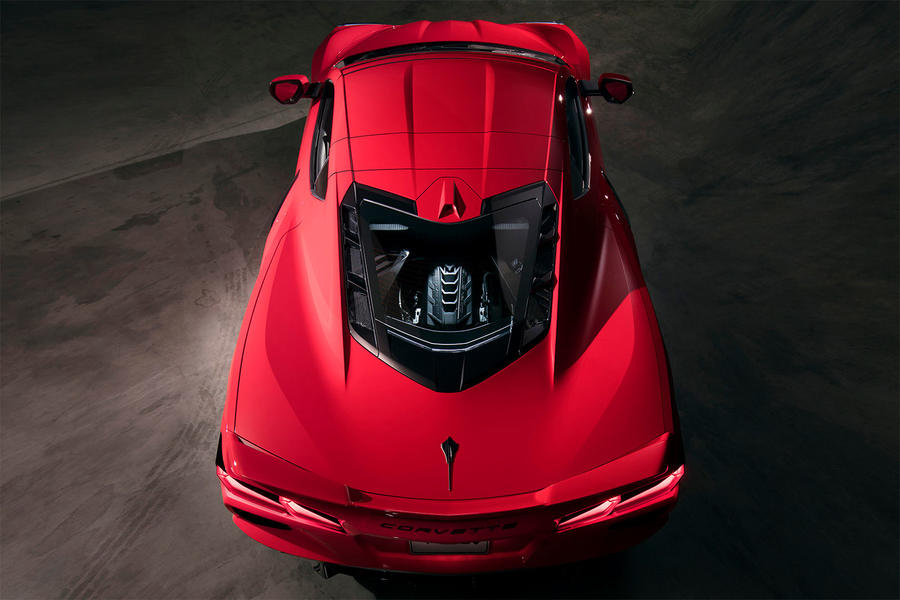 Like all recent generations of the Corvette, the C8 is being assembled in Bowling Green, Kentucky, but Chevrolet is seeking to enhance the model's presence around the world, much as rival Ford has done with the latest-generation Mustang.

Upgraded versions are likely to retain familiar designations such as Z06 and ZR1 and will be following over the next few years, with rumours suggesting the C8 could eventually nudge towards 1000bhp.

The long and winding road to the mid-engine Corvette

Log in or register to post comments
eseaton 9 May 2021
Fabulous. Just a shame it doesn't have a manual option. If it did, I'd be a customer.
si73 8 May 2021
Its awesome that this is coming here in correct wheel.drive, for here, for the first time, who will sell it dealer wise as now we have no GM dealers?

I think it looks fantastic and can see corvette styling cues so think it's lineage is reasonably obvious, though I don't see why it seemed necessary to become mid engined as opposed to front, after all Porsche's 911 has made rear engine it's thing so why the corvette couldn't do the same for being front instead of joining the rest of the super cars and being mid I don't know. Its not as if you can't have a front engined super sports car.
Either way, love this, it looks great, will sound fantastic and it's almost a realistic dream to own one.

Is that an Allegro steering wheel I can see there?