BACK TO ALL NEWS
Currently reading: BMW i4 challenges Tesla Model 3 with 367-mile range
UP NEXT
Jaguar boss signs off plan for radical new EV line-up

BMW has fully detailed the production version of its new i4 electric saloon, promising up to 536bhp from an M-badged variant and a maximum range of 367 miles.

Based on a specially adapted version of the 3 Series’ CLAR architecture, the i4 is aimed at the Polestar 2 and Tesla Model 3, but in top-spec M50 form it will offer performance that rivals the Porsche Taycan and Audi E-tron GT. It will launch in the UK in November, priced from £51,905.

It will be available initially in rear-driven 335bhp eDrive40, in Sport and M Sport trims, and 536bhp M50 xDrive forms.

In the UK, 18in wheels will be standard on all models, and entry level eDrive 40 Sport cars will feature black of gloss aluminium interior trim and gloss exterior trim elements. M Sport trim, which starts at £53,405, adds bespoke exterior styling elements and alloy wheels, and a leather steering wheel.

The M50 also gets a unique Sport Boost function that can be used to liberate the full power output for around 10 seconds when driven in Sport mode. With this activated, the M50 can do 0-62mph in 3.9sec. The eDrive40 can complete the same sprint in 5.7sec.

The i4 stores its reserves in a floor-mounted 80.7kWh lithium ion battery pack, which is claimed to be 30% more power-dense than that used by today’s i3 supermini. 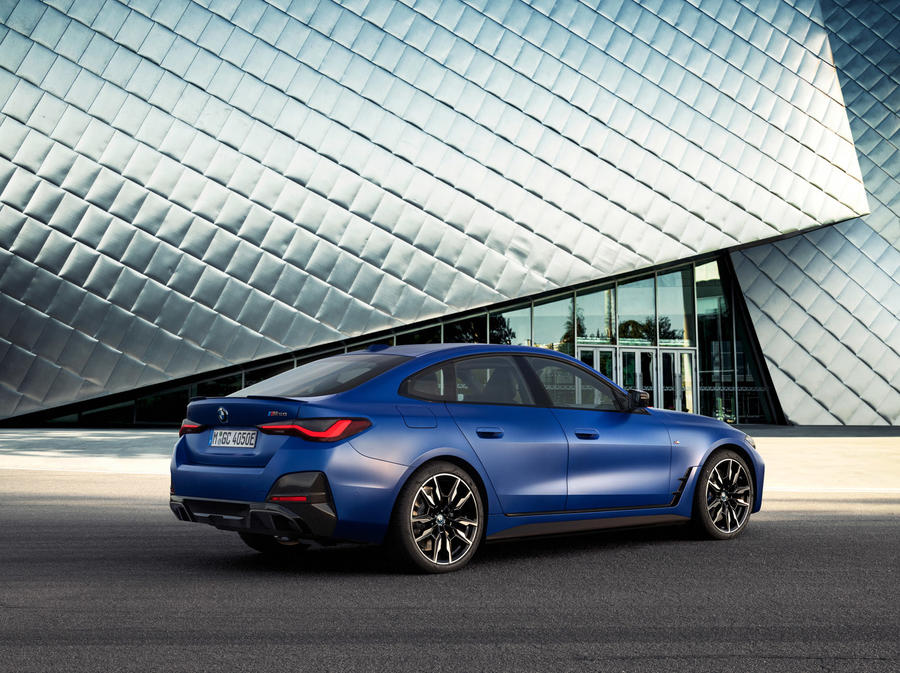 Depending on tyre size and other options specified, official WLTP range is put at between 255 and 367 miles.

At 4785mm long, 1852mm wide and 1448mm tall, the i4 has similar dimensions to the 3 Series, which development boss Frank Weber highlights as crucial to its appeal.

He explained: “There will be 3 Series customers, but the i4 is also attractive because of its loading abilities and the space inside, which will also attract potential 5 Series customers – people who are looking for a sporty sedan. We’ve chosen for a good reason the exact space of the i4.”

To further differentiate the M50 from the eDrive40, it gains performance-inspired design cues similar to BMW’s ICE sports cars. Extra intakes and contrasting trim at the front, together with the subtle rear spoiler, promote a more aggressive stance, while the mirrors, rear apron, sills and rear bumper are gloss black.

Inside, the i4 aims to offer “a richly involving driving experience”. There’s a free-standing 12.3in infotainment screen running BMW’s eighth-generation iDrive system, plus a 14.9in curved digital dial display, standard sports seats and blue accents throughout as nods to the car’s electric underpinnings. Three-zone automatic climate control is standard and ventilated seats are an option for both rows.

A range of optional packs will be available for all three models, including an M Sport Pro Pack that adds adaptive M suspension, sport steering, M Sport brakes and 19in alloy wheels.

The Edsel returns. laughable. Worse than the model 3 in just about every way except maybe build, but then again I am about to change my present lease model 3 for a brand new one which Im told is much more together. This will be interesting.

This or a 10K cheaper Kia EV6? Tough times for BMW etc ahead.

Ah yes. We have a 4 door saloon and the market demands a sleek coupe. I know, let's call it a 4 to differentiate it from the 4 door model, which is a 3.

Oh, you mean our coupe drivers want a four door. Why don't we sell them a 3?

Let's fit four doors to our 4 coupe...........and it'll have less space in the back than the 3 due to the coupe styling, and less boot space too. But we'll still charge more for it.