From £60,1258
Combines big pace with efficiency in stereotypically Teutonic fashion, but isn’t the performance SUV you’d choose for the last word in poise or excitement
Open gallery
Close

The BMW X5 M50d is proof that, contrary to popular belief, four into six goes just fine. Suggest that to your primary school teacher and you’ll probably earn yourself some extra homework. Say it to a BMW powertrain engineer, however, and he’ll just nod and smile wryly.

In fact, when four turbochargers are forcing compressed air into the six inline cylinders of the BMW X5 M50d’s diesel engine, there is much that seems to go – and go rather well. This car is the M Performance ‘caretaker boss’ of Munich’s new fourth-generation X5 range, all set to be in charge until the M division lets loose another equally regrettable and inevitable BMW X5 M wide boy.

The M50d’s engine develops 395bhp and 561lb ft. It’s a way off matching the headline figures of what every road tester will feel duty-bound to acknowledge as its mortal rival, the Audi SQ7 – not that many of the M50d’s likely BMW devotee owners, who would probably sooner set light to their annual bonus than spend it on an Audi, will much care.

What’s much more interesting is that BMW is sticking to its guns and continuing to back a high-performance diesel engine for this car, after Porsche has abandoned them entirely and is preferring, along with the likes of Land Rover and Volvo, to look to high-output plug-in hybrids in this kind of SUV.

There will, of course, be a new X5 ‘PHEV’ along in due course, too; but it won’t be positioned at a like-for-like level as the M50d in X5 model hierarchy. Which probably tells you at least as much about the maturing that BMW thinks its hybrid powertrain technology still needs to do as it does about how stubbornly Munich may be inclined to hold onto its long-nurtured performance diesel engine technology lead. 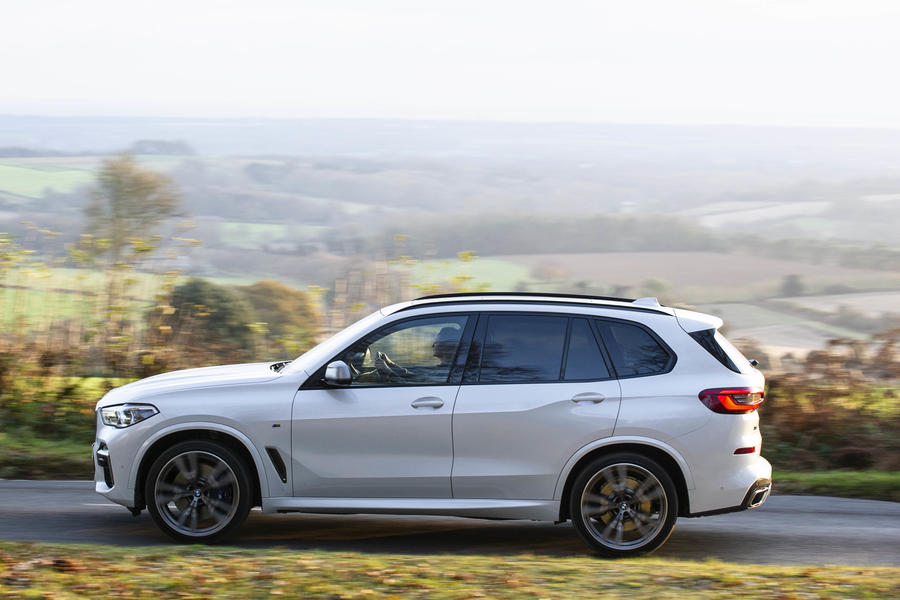 The very first examples of the ‘G05’-generation X5 have just arrived on British roads – and, but for the blindingly obvious and now apparently obligatory enlarged kidneys plonked on the grille (is it time to send in Adrian van Hooydonk’s urologist yet?), I’d say it’s a pretty smart-looking SUV.

It’s a wide SUV, mind you, having put on just over 60mm of width. Wondering what might explain that expansion, I checked BMW’s dimensions on the brand-new X7 for any ‘entirely coincidental correlation’. And wouldn’t you know it – the X5’s even wider than its new big brother.

On the inside, the car feels wide too. Its driving position is a bit more SUV-conventional, and less recumbent, than I remember of the last-gen car, but you still feel as if you might be in a big saloon that has had only as much loftiness, utility and convenience thrust upon it as was absolutely necessary. The new X5 retains that half-SUV, half-crossover vibe that many – who recognise that they need a car of its capabilities more than they really want one – have responded to time and again since 1999. Only this one has a more convincing air of onboard richness, luxury and sophistication about it than the last X5. An Audi Q7 is probably roomier for passengers; perhaps still marginally better distinguished on across-the-board material quality, too. Even so, there’s now little in it.

So what of that engine? Well, on the spec sheet, the M50d engine only makes about 100lb ft of extra torque than that of an X5 xDrive 30d; but on the road it feels like it’s been blessed with a much bigger relative advantage on mid-range pulling power. The M50d’s real-world performance level is comfortably beyond ‘brisk’, though it doesn’t quite squeeze ribcage against seat squab hard enough to qualify as ‘very fast’ either. That’s as much to do with the diesel engine’s style of delivery as anything; it’s got pretty brutish thrust between 2000rpm and 3500rpm but doesn’t take off with the abandon of other performance engines thereafter. By diesel engine standards, of course, it’s remarkably free-revving. But even so, when you leave the car’s eight-speed transmission in Sport mode, there are times when you wonder if it’s only letting the motor spin all the way up beyond 4500rpm because you’ve selected Sport mode. Use paddleshift manual mode instead and you quickly learn to upshift before 4000rpm.

It’s a shame the engine sounds so digital, too. For those reasons and others, you’d say the V8 diesel of an Audi SQ7 hasn’t got too much to fear from this whirlwind of a straight six. The Audi would be much more likely to have trouble with the BMW for handling poise and driver involvement, wouldn’t it? You’d certainly imagine so – but I wouldn’t bet on it ahead of a back-to-back comparison.

The M50d is the only X5 in the new range to come on adaptively damped steel coil suspension as standard rather than on air spheres. You can have air instead if you prefer, but only the coils can be combined with both active anti-roll bars and ‘integral active’ (four-wheel) steering, as our test car had been specified.

Looming 22in alloy wheels come as standard too, and they do thump and thud a bit over sharp edges. In tighter bends, the X5 M50d corners really keenly, particularly so should you need to dial in extra off-centre steering angle mid-corner. The car’s steering response hardly seems to soften at all as it begins to roll, almost imperceptibly, through a direction change.

It much prefers smoother surfaces to uneven ones, though, and rides sequences of bigger bumps in restless, reactive fashion in Sport driving mode. ‘Adaptive’ is better – but an air-sprung car with a broader range of ability might be better still.

BMW clearly wanted to distinguish the M Performance-branded X5 by making it feel more closely connected to the road than the ‘normal’ version, but it only really feels like that, on standard coils at least, if you don’t give the suspension too much to do. A British B-road can easily produce the opposite effect, causing the body to bounce around just when you’d hope it’d be composed and controlled. 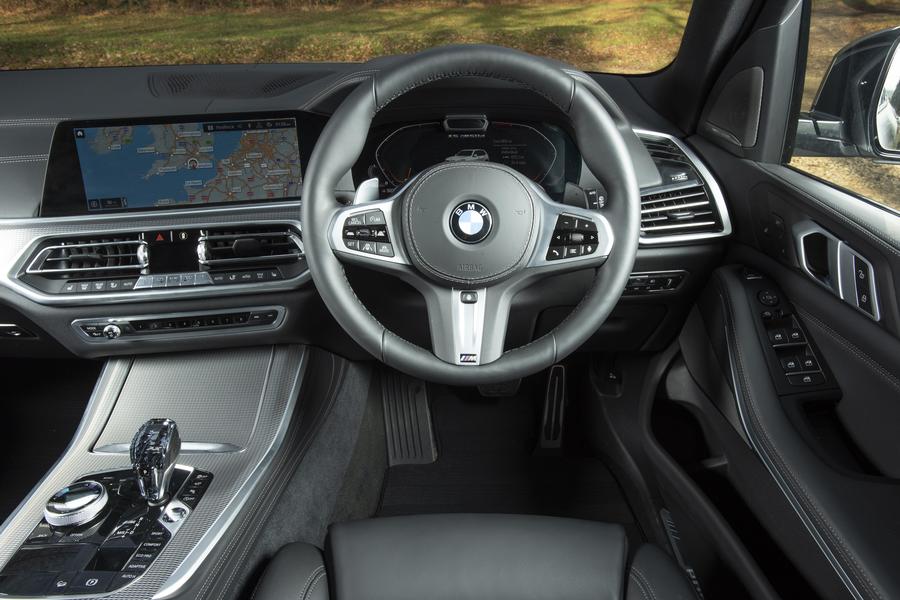 There is certainly a place on the performance SUV class’s Venn diagram for the X5 M50d. It’s pacey in an unusually undemanding sort of a way. It’d do a real-world 30mpg for a high-mileage motorway driver, which you’d struggle to get from a PHEV of the same performance level, driven in the same way. It’s vigorous-handling, though more effective than enticing or rewarding. And, by the way, it’ll do long-legged, everyday comfort and refinement, with convenience and luxury, very well too.

But it’s clearly a car whose order form has to be filled out just-so in order to capture it at its best; and even then might soon leave a really keen driver wanting some genuine entertainment factor. 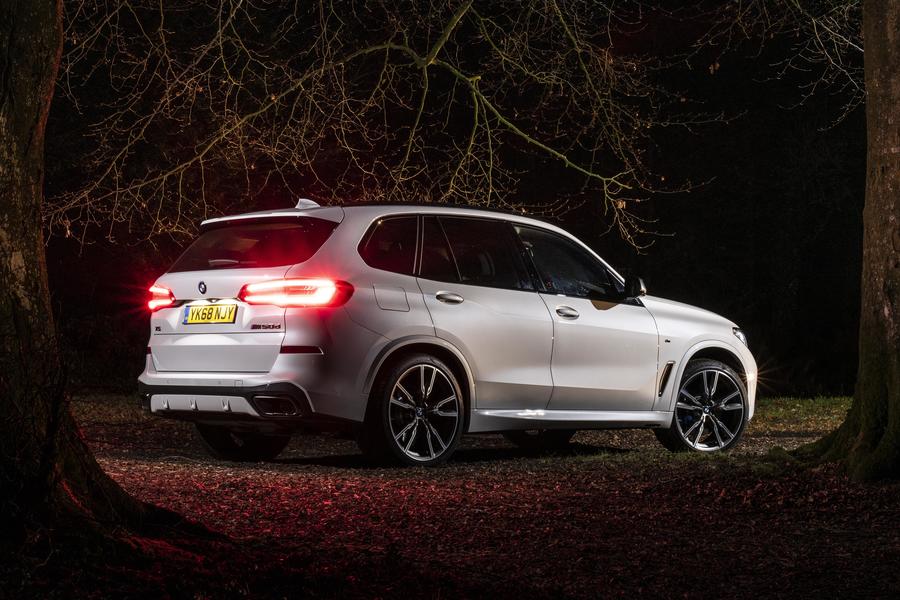 . . . Diesel Electrics are far better.  That's a terrific engine but I'd rather have it in a PHEV.

They've had long enough, surely. By rights it should be clocking up 4.5 stars by now.

Anyhow, fair play for sticking with diesel. It's the only viable fuel for cars of this bulk. And while we're on the subject of bulk, and seeing as driveways and garages aren't expanding but vehicles are - the time has also come for Autocar to start including H x L x W (Inc mirrors) stats in all reviews.

They've had long enough, surely. By rights it should be clocking up 4.5 stars by now.

Keep in mind that this review is by Matt 'in love with anything JLR' Saunders, as are the comments by the ususal suspects that habitually slagg off BMWs and big up RRs in the same breath. In the real world, if BMW products are as "hopleless", "hedious" or "unreliable" as the brand's online bashers claim, the company wouldn't be where it is now, which is very successful.