Despite sparking public interest with the large Model S and even larger Model X, Tesla’s intent to democratise electric motoring charged up a notch with this executive car-sized Model 3, launched in 2019. It’s been a runaway worldwide sales success, offering all the high-tech, drama, range and modernism of the larger cars in a smaller and more affordable package.

At low speeds, the two lower-spec models jostle you around quite a bit. Oddly, the Performance version on its sports suspension and massive 20in wheels is the most comfortable Model 3 on motorways.

Click here to buy your next used Model 3 from Autocar

It certainly handles well in Performance guise. The Long Range version is tidy, too, just with a bit more body lean and a little less grip. However, the Standard Range Plus feels altogether less balanced and less confidence-inspiring. 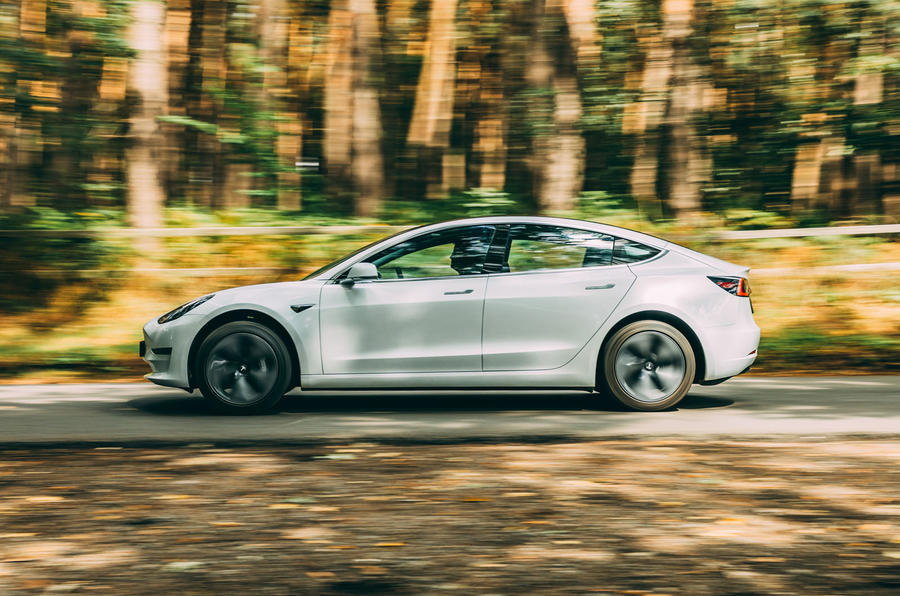 Being a pure-electric car, the Model 3 is, unsurprisingly, whisper quiet at town speeds. However, there’s quite a lot of tyre noise on faster roads, when you can also hear the wind around its frameless doors, despite double-glazed side windows.

You get essentially the same touchscreen infotainment system that features in Tesla’s larger models, although the Model 3’s screen is slightly smaller (15.0in) and a landscape rather than portrait format. The layout of the screen is intuitive, and while some of the smaller icons can be distracting to hit accurately while you’re driving, at least the system is quick and responsive once you’ve made your selection.

Front-seat occupants are unlikely to complain about space. There’s similar leg and head room in the back of the Model 3 to the BMW 3 Series – comfortably enough for a six-footer to sit behind a driver of a similar height. The boot isn’t huge, but there’s actually more space for luggage than in conventional executive rivals, thanks to a massive well under the main boot floor and the extra storage under the bonnet.

Tesla has had a poor reputation for build quality and reliability but there are signs that this is changing. The Model 3 finished in first place in the electric car class in the recent reliability survey carried out by our sibling title What Car?, with an overall score of 99.4%. Tesla as a brand finished in a disappointing 29th place out of 31 manufacturers in the same survey.

Tesla Model 3 Long Range: Pick the Long Range and you’ll get a huge potential range of 360 miles (WLTP) in the later versions. It’s well-equipped, too, including a 15in infotainment screen with Google Maps, Netflix and web browsing.

Tesla Model 3 Performance: If you have the extra dosh, take a long, hard look at the Performance. It’s ridiculously fast – we’ve timed it dispatching 0-60mph in just 3.3sec – and it still has a great range.

Depreiciation porsche would be proud of, I've looked at seconhand model 3s on the tesla website, 2 things they sell quickly and start from 37k. Brand new they only have a list price of 40k.