BACK TO ALL NEWS
Currently reading: New Audi E-tron GT flagship EV guns for Tesla’s Model S
UP NEXT
Report: Rivian could build electric 4x4s in the UK

Audi’s long-awaited riposte to the Tesla Model S, the E-tron GT, has been launched and the first examples are due to arrive in showrooms in the spring.

Described by Audi as “the gran turismo of the future”, offering an “emotional and fascinating” take on electrification, the E-tron GT has been revealed and will go on sale from day one in both ‘standard’ and hot RS forms. The launch variants will start from €99,800 (£88,110) in Germany, although UK pricing has yet to be confirmed.

Audi has attempted to retain as much as possible from the first E-tron GT concept of 2018. To that end, the four-door electric flagship has a nearly identical stance and proportions, with a heavily sloping roofline, wide track, broad shoulder line and low bonnet.

At 4.99m long, 1.96m wide and only 1.41m tall, the E-tron GT is just under 3cm longer and taller than the Porsche Taycan, with which it shares its architecture, and virtually identical in width. The roof is 17mm lower than that of an A7 Sportback – a key target for designers to ensure a more athletic look. Despite the presence of a large underfloor battery, rear passengers are said to have “generous head room” thanks to a recess in the battery pack that allows them to slide their feet low into what’s dubbed a “foot garage”.

A new interpretation of Audi’s single-frame grille makes its debut on the E-tron GT. A honeycomb-pattern grille is painted in the body colour – an Audi first – with a black ‘mask’ surround, although it can also be specified in grey or black with matching side trims and rear diffuser, depending on colour choice. Rather than cooling, the grille’s main purpose is to hide a number of sensors used by the car’s assist systems. 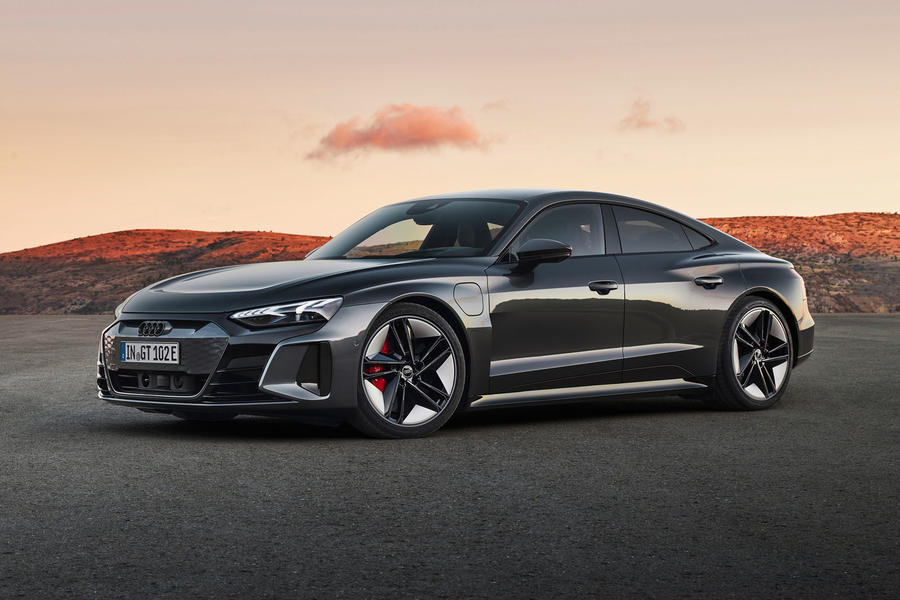 Great focus has also been put on the aerodynamics of the E-tron GT, which has a claimed 0.24Cd. Active aerodynamic elements include controllable cooling inlets in the grille and a rear spoiler that extends to one of two positions, depending on the driving scenario.

Further details include LED headlights in three guises: standard with dynamic indicators; matrix LED headlights; and matrix LEDs in combination with the Audi Laser Lights system. All lights offer front and rear LED animations for the ‘coming and leaving home’ function. Wheel sizes range from 19in to 21in.

The standard E-tron GT quattro features a 235bhp electric motor powering the front axle and a 429bhp motor at the rear axle. With both motors retaining reserves “for extreme driving situations”, the total system output is 469bhp and 465lb ft. However, a boost mode takes peak power to 523bhp for 2.5sec when using launch control. The top speed is 152mph, with 0-62mph achievable in 4.1sec.

As with the Taycan, the E-tron GT uses a two-speed transmission for the rear motor, with a short-ratio first gear for “stunning acceleration” and a long-ratio second gear for greater efficiency and high-speed performance. If launch control is not used, the E-tron GT starts off in the second gear.

The battery, mounted low in the car and allowing a weight distribution “very close” to 50:50, provides 85kWh (93kWh total) of usable energy. It’s an 800V power system, enabling faster charging and reducing wiring complexity. The battery’s inner structure and frame are made of aluminium and contribute “significantly to the rigidity and crash safety of the body”, Audi claims.

Standard AC charging is 11kW, enough for a full charge “overnight”. A 22kW charger will be offered later in the year. DC charging allows for a peak rate of 270kW – sufficient for 62 miles of range to be added in just over five minutes. The official WLTP range has yet to be set, but Audi’s predicted figure is 303 miles for the base GT. Customers can use 200,000 public charge points in 26 countries via Audi’s E-tron Charging Service, using Ionity chargers. 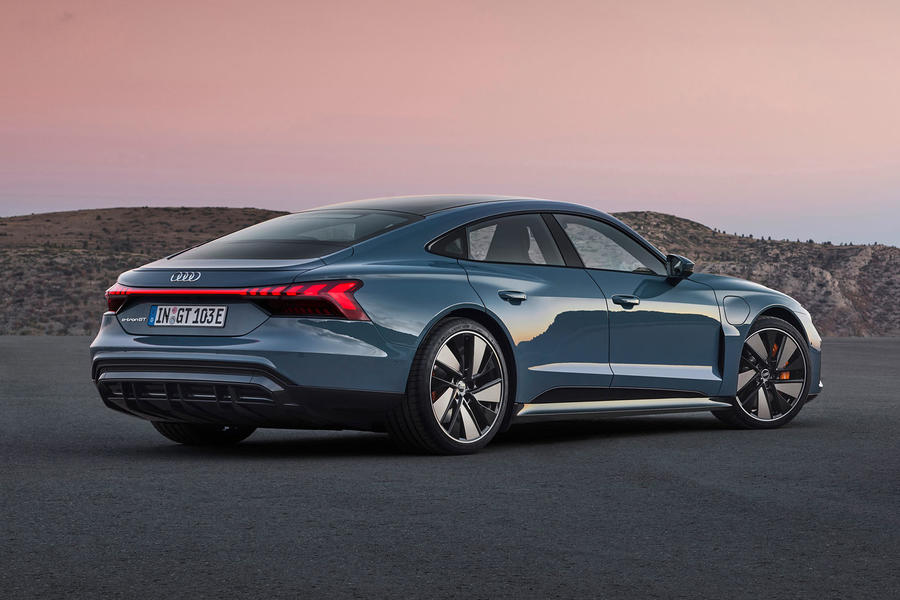 The suspension, with double wishbones and made almost entirely from aluminium, can be specified optionally with an adaptive three-chamber air spring system. The drive select functions allow multiple parameters of control and the body can rise or fall by up to 22mm, depending on mode.

The E-tron GT’s dual-motor system enables four-wheel drive but the Efficiency driving mode prioritises drive through the front wheels. Drive can be sent to the rear axle five times faster than with combustion engine quattro drivetrains, Audi claims, and the torque distribution is fully variable.

A fixed rear axle diff lock comes as standard to improve traction and stability, but a fully variable multi-plate diff lock is optional. Four-wheel steering can also be specified.

Regenerative braking is capable of up to 0.3g of decelerative force. Standard models feature steel discs, but a carbon-ceramic system with 420mm front discs is optional. Low-rolling-resistance tyres can be swapped for performance-focused items on models with 21in wheels.

The final part of the E-tron GT’s dynamic make-up is the optional E-tron sport sound. Engineers have composed a synthetic ‘engine note’ for both inside and outside the car, projected by four speakers. The pitch rises and falls depending on speed and acceleration and can be customised via driving modes.

The E-tron GT’s dashboard evolves the design used in Audi’s existing large saloons with a more wraparound, driver-focused approach. The central stack is tilted towards the driver, who sits in a “sporty low position”, while a wide central tunnel houses a space-saving gear selector switch with haptic feedback.

The dashboard itself is a technical, angular design intended to make the digital instruments appear freestanding, with a piano black bezel surrounding the central touchscreen.

Rather than incorporating the dual-screen MMI touch system from cars such as the A6, A7 and A8, Audi has elected to return to a more traditional, physical button stack for the standard three-zone climate control.

The instrument display – dubbed Audi Virtual Cockpit Plus – is 12.3in and comes with three screen modes to vary the information displayed: classic, sport and E-tron. An optional, customisable head-up display is also available.

The 10.1in touchscreen offers a typically wide variety of connectivity features similar to those found on the E-tron SUV. All variants come with the MMI Navigation Plus media centre, with LTE connection for features such as real-time route calculation via Here maps and car-to-x functionality. The E-tron route planner is also able to incorporate charging stops into a journey in the most efficient way and can pre-cool or heat the battery prior to a planned charging stop. 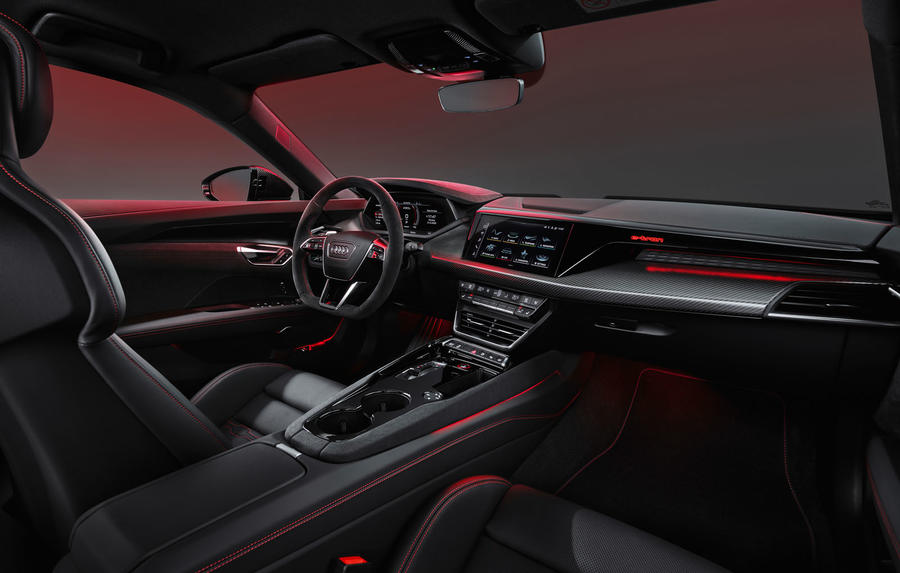 As is typical with EVs, the new car’s interior can be preheated or cooled via Audi’s smartphone app. An optional “deluxe thermal conditioning system” even allows you to operate the heated mirrors and rear window using the app.

Audi has given a nod to sustainability with the material choices inside. An optional leather-free design package mixes man-made ‘leather’ with either Alcantara-like microfibre cloth or wool-like Kaskade upholstery. Econyl, a 100% recycled material that uses nylon fibres from fabric waste or even old fishing nets, is employed for the floor carpets and mats. Dashboard options include grey or silver metal-effect trim, open-pore walnut wood and matt carbon.

Two choices for the seats are offered in the standard E-tron GT: base real or artificial leather items with eight-way electric adjustment; and Sport Seats Plus, which provides 18-way adjustment, pneumatically adjustable bolsters and heating, cooling and massaging features.

The four-door is Audi’s first German-built EV, produced in the same facility and on the same flexible line as the R8 sports car. The Böllinger Höfe facility claims to have a net-zero carbon footprint. 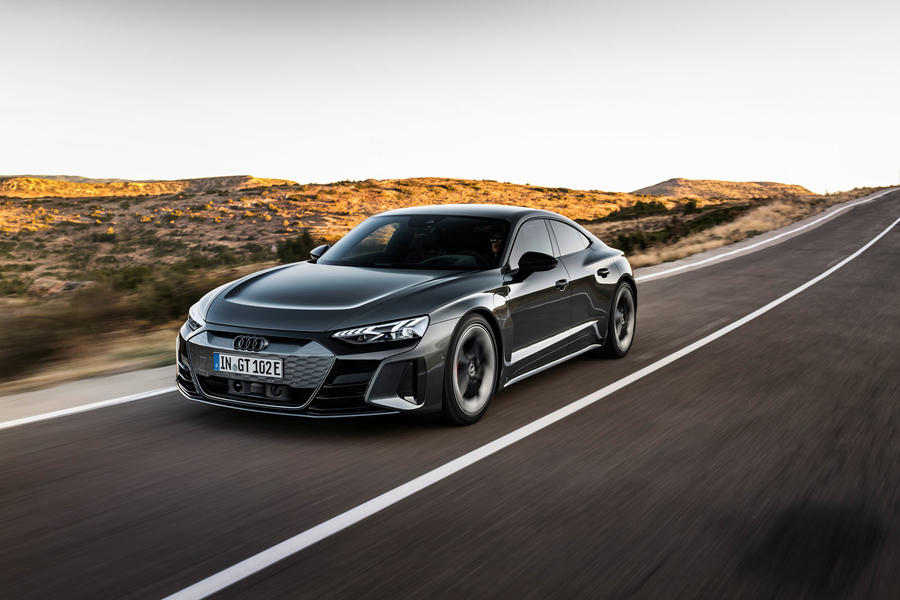 Priced from €138,200 (£121,330) in Germany, the performance-focused RS E-tron GT is described as the “dynamic spearhead of electric mobility at Audi” and offers key upgrades over the standard model.

Instead, the main focus has been on upgrading performance. Total system output rises to 590bhp thanks to a more powerful rear electric motor and torque is up to 612lb ft. In boost mode, power rises to 637bhp, and the RS E-tron GT is capable of 0-62mph in 3.3sec, with a top speed of 155mph. The estimated range reduces slightly over the standard car, to 293 miles.

The normally optional air suspension is standard on the RS, enabling a variable ride height. Also fitted as standard is the multi-plate rear axle differential and the steel brake discs are replaced by cast iron discs with a tungsten carbide coating, mated to 10-piston fixed front calipers. 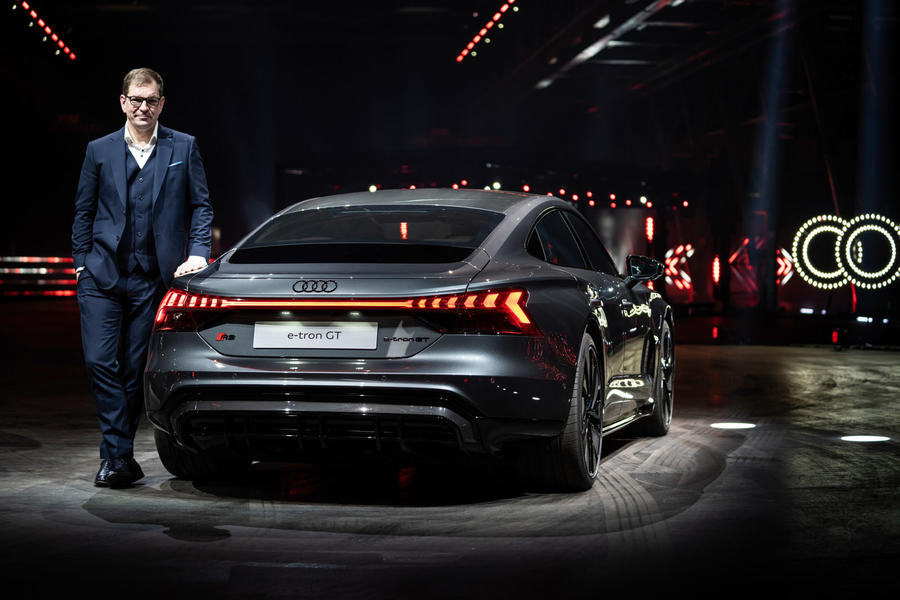 Will the E-tron GT be as much of a success story for Audi as the Taycan has been for Porsche?

“We are happy with all cars we are able to sell. We can say the pre-order level is very high and our capacity is a bit less [at Böllinger Höfe] than we have on the Taycan side. That means we will sell more Taycans than E-tron GTs, but we are very positive on what’s happening in the market and how big the interest is, so probably we will see higher numbers [of the Audi] than we expect.”

Does building it on the same production line as the R8 open the door to electrifying the R8 in future?

“That wasn’t the original idea. On the other hand, it could make sense because we have electrified production, so certainly we are flexible to do an electric R8 as well if we wanted.”

Why doesn’t the RS E-tron have a different body design from the standard car?

“You know from our range of RS models that we usually use a different body, but the E-tron GT is so beautiful [and] even the normal quattro GT has so much performance that we decided not to do a rebodied version of the RS. But I see this as an exception.”

How do you chase Tesla’s tech without cutting quality standards?

“We don’t really chase Tesla. We have our own competition and our own customers. In some areas, Tesla has set a new standard for technology and we do everything to learn from that, and in some areas we will have similar solutions and in many areas different… We will only offer new technologies when they meet our quality standards.”

It's just a Taycan beaten with the ugly stick. Who'd choose this over the Porsche is beyond me.

I mean let's be honest, most people would rather have a Taycan Turbo than this Audi, if only for the badge prestige.That it is only a few thousand more expensive and has even quicker 0-60mph times seals the deal.

I'll take the Model S over this anyday for its far better driving capabilities and hardware/software advantages. BUT the rear end design of this Audi looks supurb. I wish the exterior of the Model S looked a bit more agressive like the E-tron GT.

Get rid of those fisher-price doorhandles though. The Taycan has nice flush doorhandles, so why can't this?