BACK TO ALL NEWS
Currently reading: 2019 BMW X7 to be revealed imminently
UP NEXT
Mourning the car bodystyles that have died out

2019 BMW X7 to be revealed imminently

The BMW X7 will be revealed imminently according to the German car maker, which has release a dark image of the front of the upcoming large SUV.

Shown on BMW's Instagram channel, the words accompanying the image said: "The next big thing is coming soon. The first-ever #BMW #X7."

We’ve already seen hints off the car: in a video released earlier this year (below) showing a disguised X7’s off-roading ability, in patent images which surfaced online and during our recent camouflaged prototype drive of the car.

Due to make its public debut at the Los Angeles motor show in November, the range-topping SUV, which will also go up against the Mercedes-Benz GLS, is heavily inspired by the X7 iPerformance concept at last year's Frankfurt motor show.

BMW's upcoming seven-seater will initially feature a naturally aspirated engine, rather than the hybrid powertrain of the X7 iPerformance. However, a hybrid variant will come later.

An X7 M50d M Performance, as well as xDrive40i, xDrive50i and xDrive30d variants will be available from launch, with the 3.0-litre diesel in 30d, 40d and 50d guises and the twin-turbo 4.4-litre petrol V8 from the X6 xDrive50i expected to make up the meat of the range.

It's not known if an upper M Performance model is will sit above the M50d M Performance - it's aimed at the US and Chinese markets - so an equivalent to the M760Li could act as the range-topper. X7 xDriveM60i badging could be used.

Sitting alongside the 7 Series at the top of BMW's line-up, the car is due on UK roads from February 2019. The X7 has been spotted testing several times in the past few months, having been in development since 2015, offering glimpses of the future SUV's design and scale. It will be the largest SUV yet by BMW. 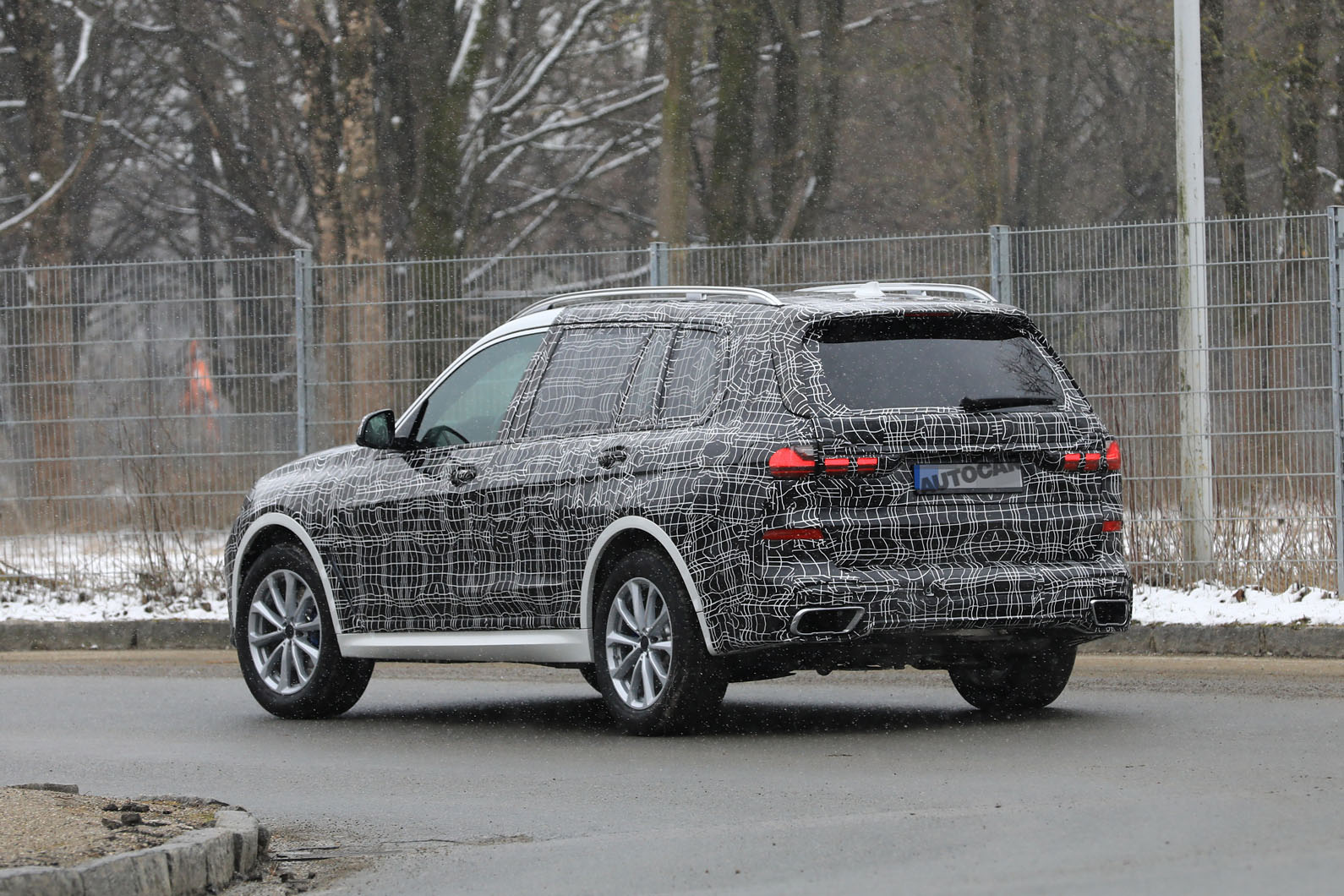 It's around 110mm shorter and a little wider than the Mercedes-Benz GLS and around 30mm longer than the Range Rover.

It will have three rows of seats, making it a rival for the Cadillac Escalade and Lincoln Navigator in the US and China – two core markets for the car.

Familiar design features such as halo daytime running lights and kidney grilles will appear. The light bar seen on the X7 iPerformance is not carried over to the production model.

While the seven-seat X7 is being developed with the US and Chinese markets in mind, it was confirmed for the UK by former BMW head of sales and marketing Ian Robertson in 2016.

Speaking to Autocar at the New York motor show that year, Robertson said: “We will have some versions that are top-end luxury, as well as more mainstream versions. I can’t talk about pricing now, but given that this car will have all the technology and luxury of the 7 Series, it gives you a pretty good idea of the price point we’re talking about.”

Previously, it was thought that the X7 would be built on an extended version of the X5’s underpinnings, but Robertson said many parts are actually bespoke. “If you put both cars next to each other, the resemblance is small in terms of wheelbase, etc. We’re not going to just extend the wheelbase; it’s a complete new panel cell.”

The X7 will be built at the company's plant at Spartanburg, USA.

Does it have to be revealed?

Does it have to be revealed?
Peter Cavellini 16 October 2018

Does it have to be revealed?

just because it’s not a Range Rover or a Discovery or a doesn’t make it inferior, fact is, the perceived King of the SUV’s actually sufferers more failures and breakdowns than BMW’s equivalent, now, if your paying two bedroom flat money for a set of Wheels you’d expect it to be totally reliable would you?, well, as we know nothing is, a Car for everybody a Car for everybody.

I’m prepared to bet a large

I’m prepared to bet a large amount of money it will not be launched with a naturally aspirated engine.

Wanna take it on, Rachel Burgess?

Really Autocar, this video of

Really Autocar, this video of supposed off-road ability is pathetic. The X7 is shown tackling mildly difficult surface conditions that most normal cars could handle, and certainly those with AWD would breeze through. Like the overwhelming majority of SUVs, the X7 is heavily road-biased and never intended for serious, potentially damaging off-road use. It’s laughable, though not surprising, that manufacturers continue to advertise their SUVs as vehicles ready to face all that nature can throw at them.

I agree,doesn’t look to dodgy to even do on a Bicycle!, and it’s not taxing to suss that most SUV’s never go off Road, more are statement Cars, or five star Hotel transport for guests, but, so what!, keeps money coming in for more development, must be hard to stay top Dog, but let me ask you this, sticking to your principles, would you turn down one if you got a good deal on one?

Yes Peter, I would turn down a deal on a SUV. They are not to my taste and never have been. I’m very happy with the styling and attributes of “conventional” saloons and estates, though I always choose AWD for the traction advantages in bad weather and ability to put down the power of a high performance vehicle (I drive an Audi S6). I understand the reasons why SUVs appeal to so many, and the profits they generate, but personally I much prefer true 4x4 off-roaders like the Jeep Wrangler that sacrifice a lot of on-road refinement as a trade-off for the genuine ability to routinely handle arduous conditions. I’ve found recreational off-road driving to be great fun, but each to their own. I just find it rather laughable that some manufacturers persist in marketing their SUVs with the fairytale notion that they can handle really tough conditions.

I agree,doesn’t look to dodgy to even do on a Bicycle!, and it’s not taxing to suss that most SUV’s never go off Road, more are statement Cars, or five star Hotel transport for guests, but, so what!, keeps money coming in for more development, must be hard to stay top Dog, but let me ask you this, sticking to your principles, would you turn down one if you got a good deal on one?