BACK TO ALL NEWS
Currently reading: Autocar's most popular reviews of the week
UP NEXT
New Dacia Sandero: major upgrade for value supermini

Autocar's most popular reviews of the week

Suzuki's all-new Vitara is the most popular review on autocar.co.uk over the past week
Share
Open gallery
Close
Share story

Suzuki's Vitara has topped the list of the most viewed reviews on Autocar for the week ending 8 May. Read below to find out what joined it in the top five.

The fresh-faced compact SUV has shot to the top of our most popular reviews list, dethroning the Jaguar XE in the process.

When we tested a prototype version late last year, our man declared that pre-production model to be a decent bet and that it was capable, economical and well-priced.

After undergoing the full road test treatment, we can say hand-on-heart the new Vitara re-confirms our initial thoughts - being a well-equipped, competent performer with sharp driving dynamics.

In a highly competitive segment it needs to be a strong contender, with rivals like the Dacia Duster, Skoda's Yeti and Renault Captur setting a high standard.

Click here to read our review of the new Suzuki Vitara.

A decent showing by this refreshed German three-door hatchback, after going live on autocar.co.uk just over a week ago.

This 125d M Sport continues the 'wolf in sheep's clothing' trend, with power coming from a 2.0-litre turbodiesel motor, developing 221bhp and 332lb ft of torque.

A rather stellar performance by the all-electric Porsche Panamera rival, having gone live only two days ago and already jumping to number three on our rankings.

It's hardly surprising why the Tesla Model S - in range-topping P85D form - is such a huge hit among Autocar's online audience. With a power output totalling 682bhp and 687lb ft of torque, monstrous acceleration and four-wheel drive traction, it's a bonafide weapon.

Volkswagen's Golf R is on a roll in the autocar.co.uk most popular rankings. Two weeks ago, it's bigger-booted Estate sibling featured on our list, but this time the hatchback variant returns to the top five.

As well as being a firm favourite with our readers, it's also highly regarded here at Autocar Towers - we're even running one as a long-termer, too. 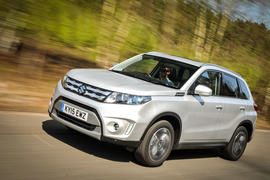 Another compact crossover to star in our top five and a chief rival to the new Suzuki Vitara.

Dacia's Duster is no stranger to our most popular reviews list, having appeared on multiple occasions.

The Romanian car firm's creation has been a source of controversy since it was launched back in 2010. However, the robust Duster remains incredible value for money with a frugal range of engines and a spacious cabin.