Audi Sport has expanded its range of performance SUVs with the launch of the new RS Q3 Sportback coupé-crossover as its second high-performance SUV. It will take on the likes of the Mercedes-AMG GLA45 and BMW X4 M when it goes on sale early next year.

The new machine is based on the recently launched Q3 Sportback, and shares the same underpinnings as the new second-generation RS Q3, which was unveiled as the same time. That includes a 394bhp turbocharged five-cylinder 2.5-litre engine.

Along with the forthcoming RS Q8, it's part of a major expansion of Audi Sport’s SUV line-up designed to boost the performance division’s sales.

Product manager Carolin Krause said that the RS Q3 Sportback was aimed at a “completely new segment, for young lifestyle-oriented customers, who want performance and everyday usability.” Krause said there were no concerns within Audi about the new RS Q3 Sportback cannibalising sales from the standard RS Q3, adding: “The market is ready for these models, especially in the smaller segments.”

The RS Q3 Sportback features a number of design changes from the regular Q3 Sportback, both to stand apart from the range and to reinforce the links to the RS Q3. Design Matthew Baggley said: “When we designed the regular Q3 and Q3 Sportback, the aim was to give customers as much differentiation as possible, but for the RS models, we felt it necessary to bring them back together.”

As a result, both models have wheel arches to widen their width by 10mm (the track remains unchanged). They also get a customised front grille with a single-frame design. There are also sculpted air intakes in the new-look front bumper. While the intakes are designed to reflect the RS6 Avant and RS7 Sportback, they feature a ‘boomerang’ design that's unique to the two RS Q3 models. 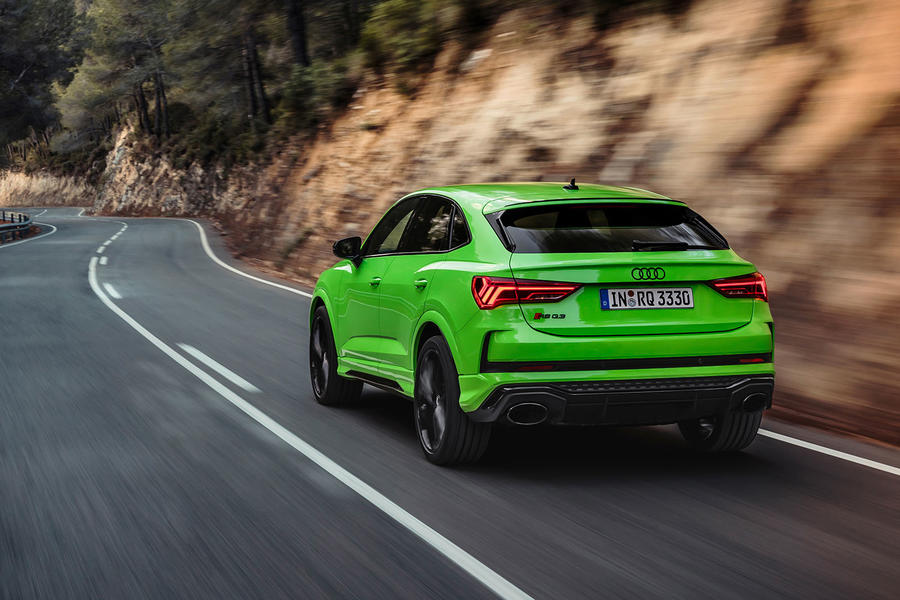 There are standard LED lights at both the front and rear of the car.

Inside, both models offer black leather and Alcantara sports seats and other bespoke design details, with a number of Audi Sport-exclusive options on the Drive Select and infotainment system. There are a number of RS details, and more available – including Nappa leather seats with integrated head rests – via a number of customisation options.

Underneath their bodywork, the RS Q3 and Sportback are mechanically identical, powered by an upgraded version of the five-cylinder 2.5-litre turbo engine from the original RS Q3 and also used in the TT RS. The unit has been tuned to produce 394bhp, compared to 335bhp in the old RS Q3 (362bhp for the Performance variant) and offers 343lb ft of torque between 1950rpm and 5850 rpm.

Power is delivered to all four wheels through a seven-speed automatic gearbox, with wheel-selective torque control to aid traction and handling. Audi’s Drive Select system features six modes, including two bespoke RS options accessible via a button on the steering wheel.

Both RS models sit 10mm lower than the regular Q3 and Q3 Sportback and feature sport suspension and Audi’s Dynamic Chassis Control as standard, with MacPherson struts at the front and a four-link design at the rear. They also feature specially tuned progressive steering, with a choice of 20in or 21in wheels and steel or ceramic brake discs.

The RS Q3 Sportback will go on sale early next year, at the same time as the RS Q3. While pricing hasn't been finalised, it is expected to be above the £44,785 of the old RS Q3.

Like the color, that's about it, it's just another Audi, nothing radical,won't be cheap, but why should it?, and we're being encouraged to buy SUV's , why I don't know, yeah, nice color......