BACK TO ALL NEWS
Currently reading: Aston Martin DB11 Volante tests on Nurburgring ahead of 2018 launch
UP NEXT
Mercedes-Benz: electric C-Class likely to arrive after 2024

Aston Martin DB11 Volante tests on Nurburgring ahead of 2018 launch

The Aston Martin DB11 Volante has been spotted high performance testing at the Nürburgring 12 months before it goes on sale.

The test model looks identical to the “lightly disguised engineering car” that was shown by Aston Martin earlier this year (see bottom picture). An insurance database check confirmed that the development model is running the same twin-turbo 5.2-litre V12 as the coupé, making 600bhp at 6500rpm and 516lb ft between 1500 and 5000rpm.

The DB11 Volante could also launch with a Mercedes-AMG twin-turbo 4.0-litre V8, which is due to be introduced to the Aston Martin range next year in the successor to the V8 Vantage before joining the DB11 range. Producing between 500 and 550bhp, the engine is currently used in the Mercedes-AMG GT. 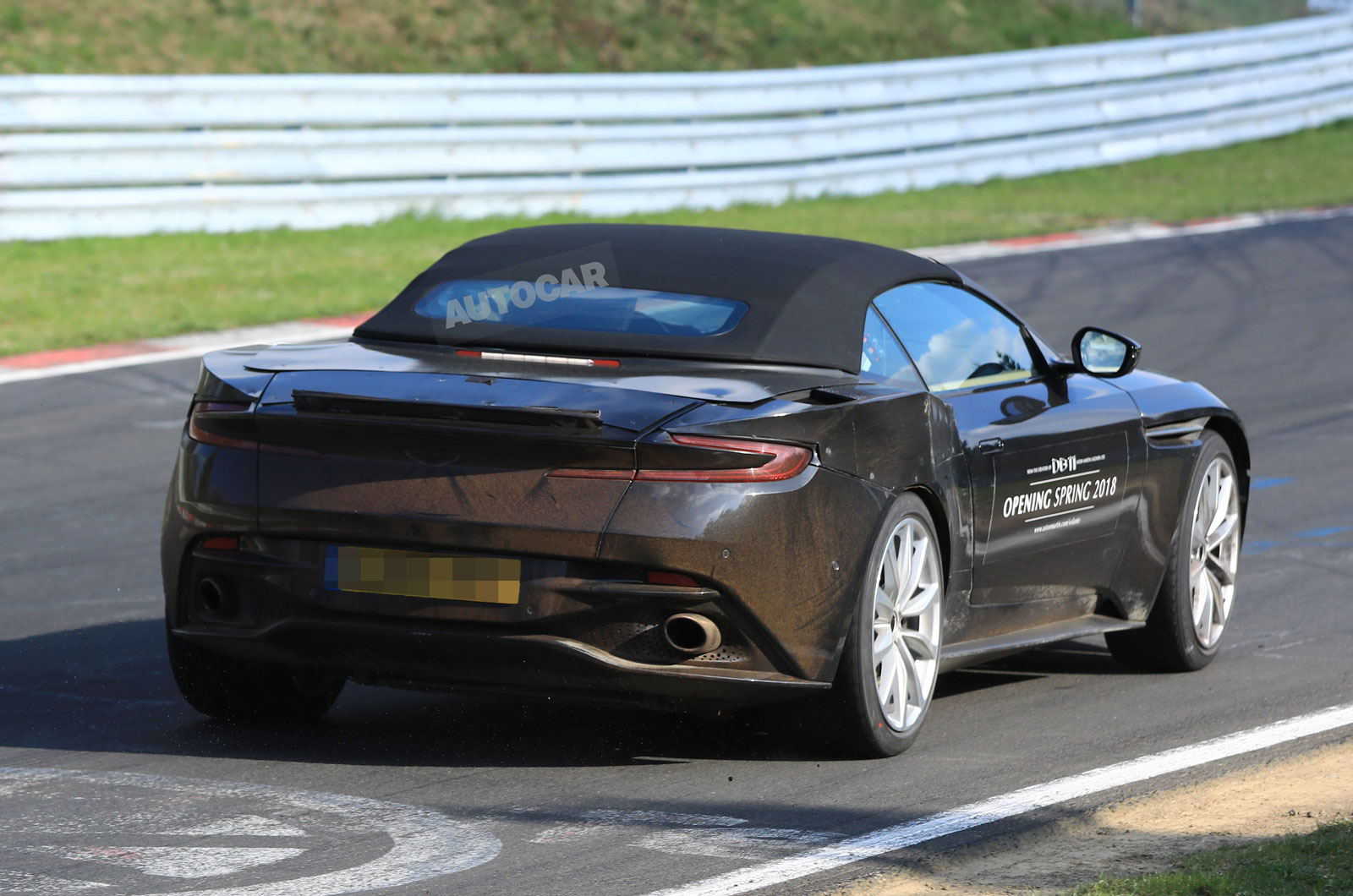 The aluminium-bodied DB11 Volante will be slightly heavier than the coupé due to the addition of its roof-opening mechanism and chassis strengthening. With an inherently strong body and chassis, only a subtle increase in weight is expected, with a spokesman revealing that the Volante is aiming to match the coupé’s 0-62mph time of 3.9sec.

A sound-deadening multi-layer fabric roof will keep noise down in the cabin, and Aston Martin is likely to make subtle changes to the driving dynamics, including a slightly softer suspension set-up than that of the hard-top. 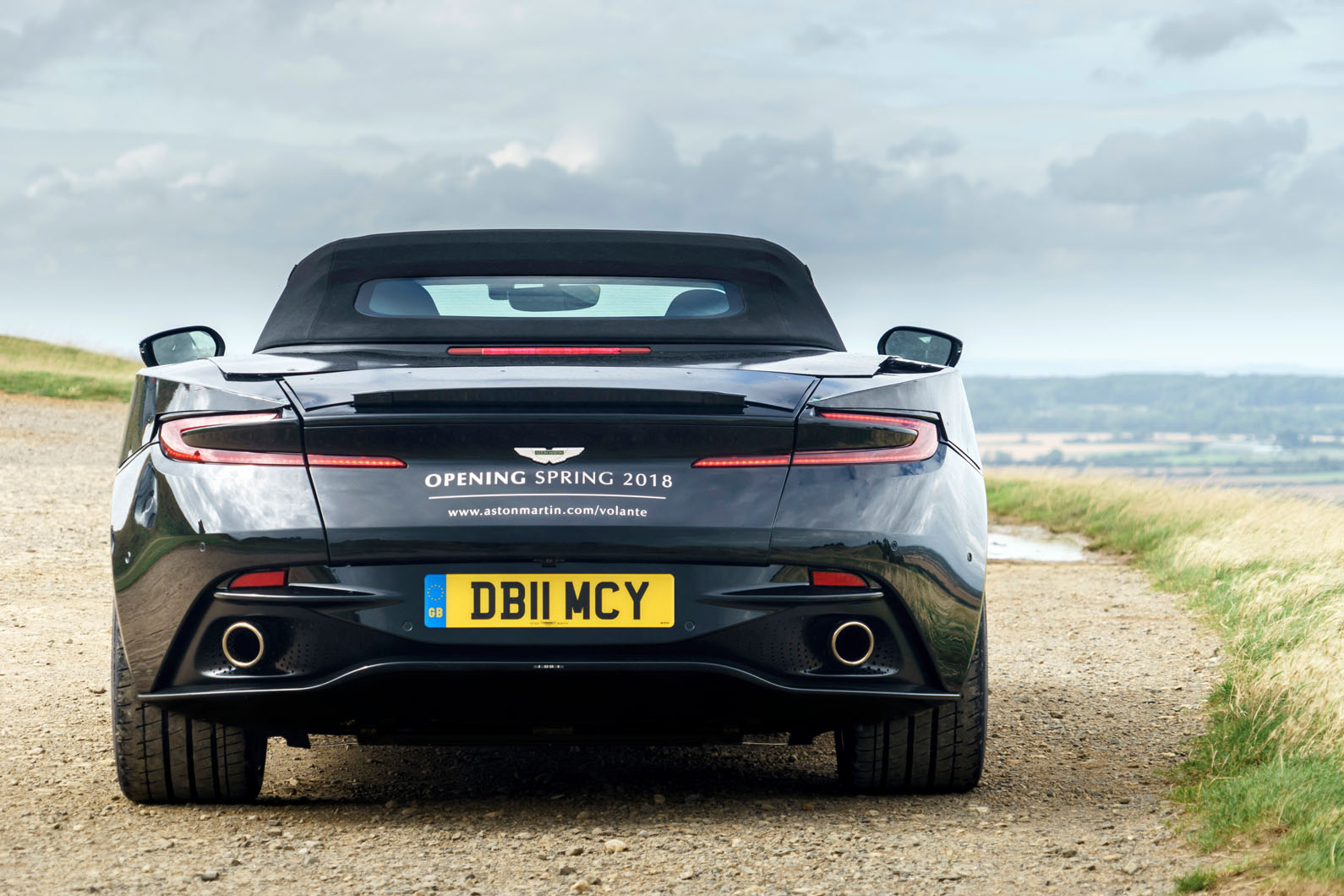 With four-seater convertible rivals including the Bentley GT Speed Convertible and Ferrari California T, as well as models such as the Mercedes S 63 AMG Convertible, the DB11 Volante will launch with a price-tag of around £155,000, £10,000 more than the hard-top.

The 2018 DB11 Volante is just one part of Aston Martin’s plan for the next five years. In the near future, replacements for the V8 Vantage and Vanquish are due, as well as a new all-electric version of the Rapide, called the RapidE. The Aston Martin AM RB-001 hypercar will go on sale in 2018, while the DBX crossover – the first car to be produced at Aston’s St. Athans, Wales plant – will arrive in 2020.

With the DB11 already launched does it really take till 2018 to launch the volante?
scrap 16 September 2016

I realise, after a 2nd look,

I realise, after a 2nd look, that those are disguised haunches at the back - good, because the image from dead behind the car looks awful. Can't understand how AM allowed this image to be released.
BigZoot 16 September 2016

did i look at the picture and immediatetly think M6 Coupe