BACK TO ALL NEWS
Currently reading: Aston Martin mid-engined 488 rival 'signed off' for 2021 launch
UP NEXT
Maserati reveals hardcore Trofeo Ghibli and Quattroporte saloons

Set to take on the Ferrari 488 GTB and McLaren 720S, the supercar will follow in the footsteps of the mid-engined Valkyrie hypercar
Share
Open gallery
Close
Share story

Aston Martin CEO Andy Palmer has confirmed that a mid-engined supercar has been signed off for production.

Due for launch in 2021 as a rival to the McLaren 720S and Ferrari 488 GTB, it will be the second mid-engined Aston model, following the limited-edition Valkyrie hypercar, due in 2019.

The car is one of seven models the company intends to launch between now and 2023 and will arrive towards the end of that time frame. It will be developed with Red Bull Racing at a new facility in Milton Keynes. However, unlike the Valkyrie, the mid-engined model will be more of an Aston project.

Palmer said the launch of the Valkyrie (pictured below), the name of which was confirmed at the Geneva motor show, was important in establishing Aston as a credible maker of mid-engined models.

He also revealed that the new mid-engined car will have an all-new powetrain. “In our portfolio today, we don’t have an engine capable of giving us the output we require,” he told Autocar. “Whether through collaboration with AMG or whether by ourselves, we have to find an answer.”

The new model will be built in Gaydon alongside the DB11, the Vantage, a replacement for which is coming later this year as a much more sporting model, and the Vanquish, which is to move into true front-engined supercar territory in 2018. 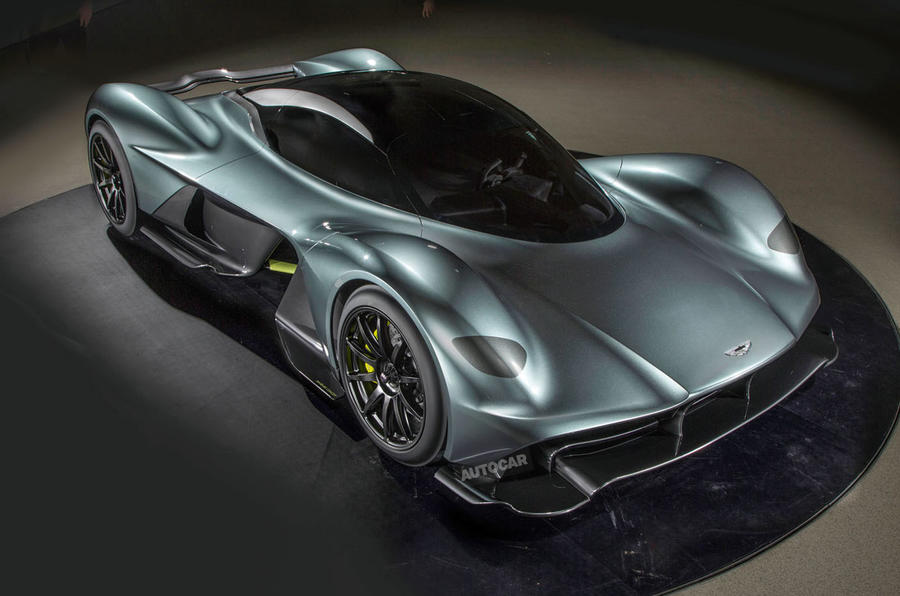 Palmer said the mid-engined V12 488 rival would bring true beauty to the segment and that function would follow form. Much of the aerodynamic work would be done underneath the car, as has been done on the Valkyrie under the watch of Red Bull’s Adrian Newey. Palmer said it was also possible that Newey would have an involvement in the new supercar.

Development will be headed up by Max Szwaj, who recently joined Aston from Ferrari as chief technical officer. Szwaj brings with him years of experience at Ferrari of working on mid-engined supercars, and at Aston he will work closely with design chief Marek Reichman on the new supercar.

All of the new models will give Aston a range of seven models, each with a seven-year lifecycle and one year apart from each other, to allow the company to better manage development resources and ensure that the business is stable enough to counter falling interest in one segment or another over time.

The Valkyrie is not one of the seven models, instead living as a special limited-run model. All of its development has been virtual so far and the first prototypes will hit the road later this year.

...And does anyone at Aston know

10 March 2017
the meaning of the word Valkyrie? The name, from Norse mythology, means "chooser of the slain" and refers to a host of female unlovelies who select those about to die in battle.

9 March 2017
But is the mid-engined supercar arena becoming too crowded for Aston to make an impact? McLaren, who's credentials are unquestionable, haven't really achieved their sales targets. Nor should be a V12, not when the world is going hybrid or full electric. No point in doing a car for yesteryear, especially when there's a few years before its launch.

I'm seriously worried that we

10 March 2017
I'm seriously worried that we're not going to have enough multi-millionaires to afford these amazing machines! We urgently need to reduce taxes on the obscenely wealthy so that this doesn't happen. Don't worry, the working man can still take a few more kicks.

10 March 2017
[quote=jmd67]I'm seriously worried that we're not going to have enough multi-millionaires to afford these amazing machines! We urgently need to reduce taxes on the obscenely wealthy so that this doesn't happen. Don't worry, the working man can still take a few more kicks.[/quote] So you'd prefer a heavy additional tax levy on the wealthy, such that they no longer want to spend money on products such as expensive cars, significantly reducing demand and thus making the thousands of people in the supply chain now redundant? It's genius!

10 March 2017
I'm not a hippy and I LOVE cars. I've spent half of my life reading about supercars and admire the men and women who build them hugely. But things are getting seriously out of whack are they not? Trickle down economics do not work and I'm not sure that, even in this crazy out of balance world of super rich and foodbanks, there are enough millionaires to sustain another mid-engined supercar made in serious numbers. If there are then I'm despairing even more.

10 March 2017
[quote=jmd67]I'm not a hippy and I LOVE cars. I've spent half of my life reading about supercars and admire the men and women who build them hugely. But things are getting seriously out of whack are they not? Trickle down economics do not work and I'm not sure that, even in this crazy out of balance world of super rich and foodbanks, there are enough millionaires to sustain another mid-engined supercar made in serious numbers. If there are then I'm despairing even more.[/quote] Well said, sadly. Unfortunately a lot of English workers think they deserve to be serfs.

11 March 2017
...lol on taxing the rich till they squeak! Those that have taken the risks and made a lot of money should be allowed to spend it as they see fit! For every billionaire that buys an Aston or Learjet or mega-yacht benefits a "lesser" mortal on a production lines benefits through being employed! Why should Governments dictate how these peoples money is spent? A percentage is a percentage, why are higher earners further penalised? 10% of a quid is no different to 10% of a million quid so why the inequity despite the millionaire paying more to the exchequer than the pauper in absolute terms? This is a car forum, so I am going a little off track, however without wealthy people there would be no British luxury car industry.

10 March 2017
If you're going to launch a car like this then I recommend that you take it around the nurburgring, edit a dodgy video (this time make the speedo read better than 918 times. VW/Lambo are such novices), tell the world that it completed a 5mins 20sec lap... without using full revs... err... and with a blind folded driver at the wheel. Gulable idiots will love it.