An Aston Martin DB11 equipped with a twin-turbocharged V8 engine will be launched later this year.

The future model's engine is sourced from Mercedes-AMG and is based on the ‘hot-vee’ unit used by the AMG GT. It will produce around 525bhp, which is 75bhp less than the existing twin-turbocharged V12 DB11. Government data confirms this development car testing with a 3982cc engine; the same capacity V8 as is used in the AMG GT.

The V8 comes as part of Aston Martin's deal with Mercedes, which involves co-operating on powertrain development. The 2018 V8 Vantage will also inherit the AMG unit.

The DB11 already features Mercedes' electronic architecture and switchgear, and the same is expected for Aston’s other future models.

Autocar understands that aside from engine development work, the DB11 test car seen here is being used alongside several other V12-engined mules to finalise chassis settings before the first production V8 DB11s are built.

Although the first mule was wearing camouflage, the exterior looks unchanged from the V12 version, suggesting both variants will be aesthetically identical.

Due to the smaller block under the bonnet, the model will be a little lighter than the 1770kg V12 model, but thanks to its lower power output, performance will trail that of the range-topping model. Pricing will also significantly undercut the V12 model, which starts at £154,900. 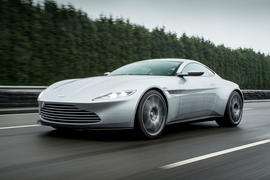 It looks and sounds:/ Looks slow witted. Screams like a guinea pig. This can't be an Aston Martin? Or could it? Jesus F Christ!

And by the way the SUV look to be "racy" in comparison!

The DB11 should be exclusively a V12 - and it's not a Continental GT rival simply because unlike the Bentley, the DB11's rear seats are useless for adults. So just don't cheapen the car and brand - leave the V8 for the new Vantage.
martin_66 4 May 2017

I take it your Astons are also not a Vantage or Vanquish, either, as the V8 and V12 engines used in the Vantage, DB9 and Vanquish are made in a FORD factory in GERMANY!!!!! Or did you just forget that?
View all comments (17)