This is the Aston Martin AM-RB 001, the hypercar built in collaboration with Formula 1 team Red Bull Racing that is the fastest, most advanced Aston yet and the first road car to be created by the foremost F1 designer, Adrian Newey.

Autocar was granted exclusive access to this full-sized model of the two-seat AM-RB 001 ahead of its official unveiling at Aston’s Gaydon headquarters on 5 July. A total of "between 99 and 150" road cars will be built, as well as 25 track cars. In its track specification, the AM-RB 001 will, Aston boss Andy Palmer maintains, be capable of lapping Silverstone at the same pace as an F1 car in race trim.

The partnership has been led by Red Bull chief technical officer Newey and Aston’s Marek Reichman (design director) and David King (special operations chief). Every component on the car is bespoke and advanced materials have been used throughout. “It is completely uncompromised,” said Palmer.

Why the AM-RB 001 is practically a racing car 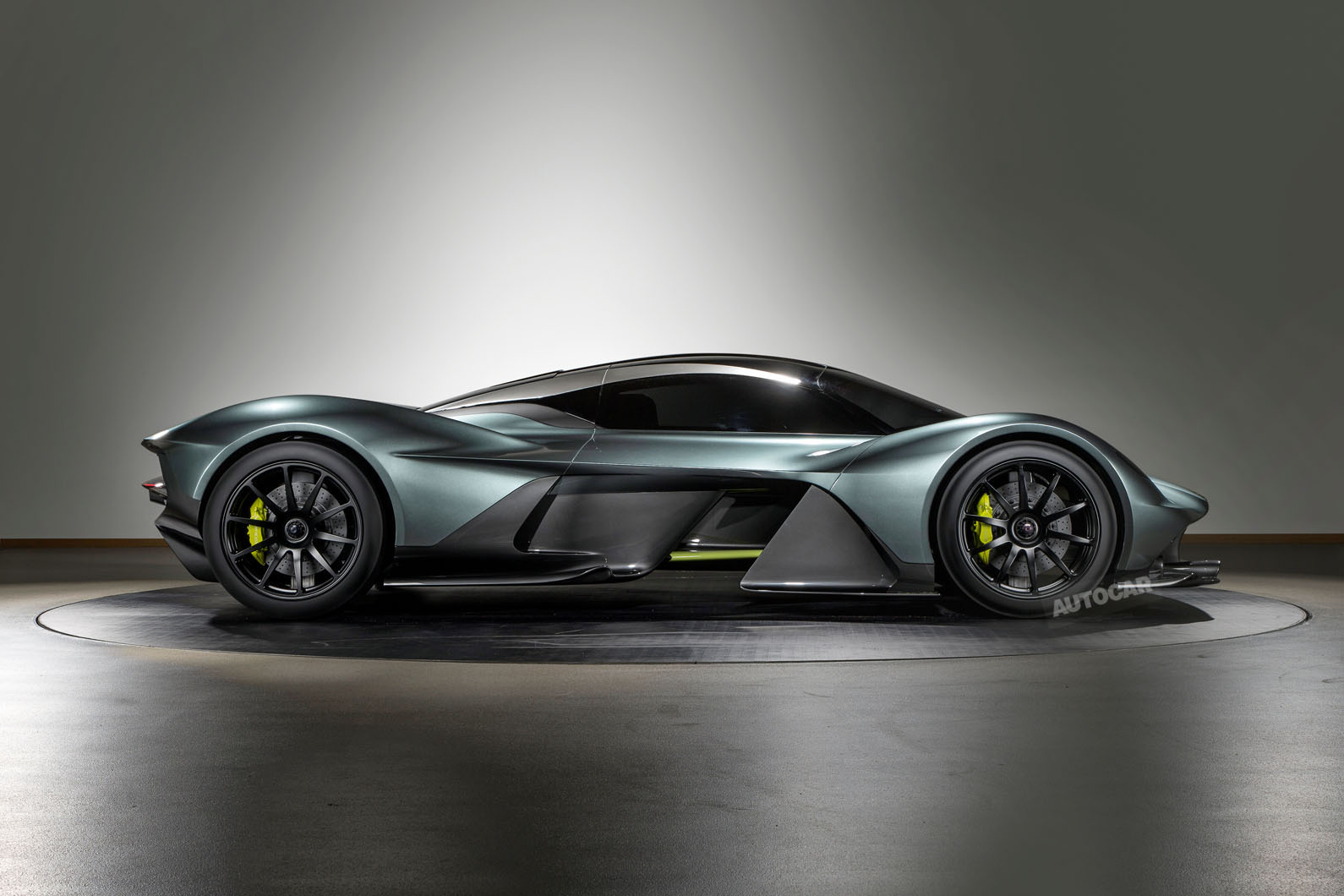 Newey’s influence is most evident on the car’s underbody, which is shrink-wrapped to the underside of the driver compartment at the front and the engine bay at the rear. Front and rear diffusers provide downforce and channel air for ‘ground effect’ aerodynamics.

Aston Martin chief designer Miles Nurnberger described it as “a catamaran with wheels, not a car”. He added: “We’ve shown a few potential customers and they’ve all said, ‘Where do my feet go?’ It is so shrink-wrapped, and on the top surfaces, everything is tucked down to the body so tightly.”

The final production car is likely to be about 1900mm wide and less than a metre tall. The definitive car is likely to grow slightly and feature some changes to the model because the technical package is still being honed.

The two-seat hypercar adopts a reclined, feet-up driving position based on an F1 car’s. Further enhancing the aerodynamics is the absence of door mirrors. The AM-RB 001 will instead use rear-facing cameras that project an image onto a screen on the dashboard. 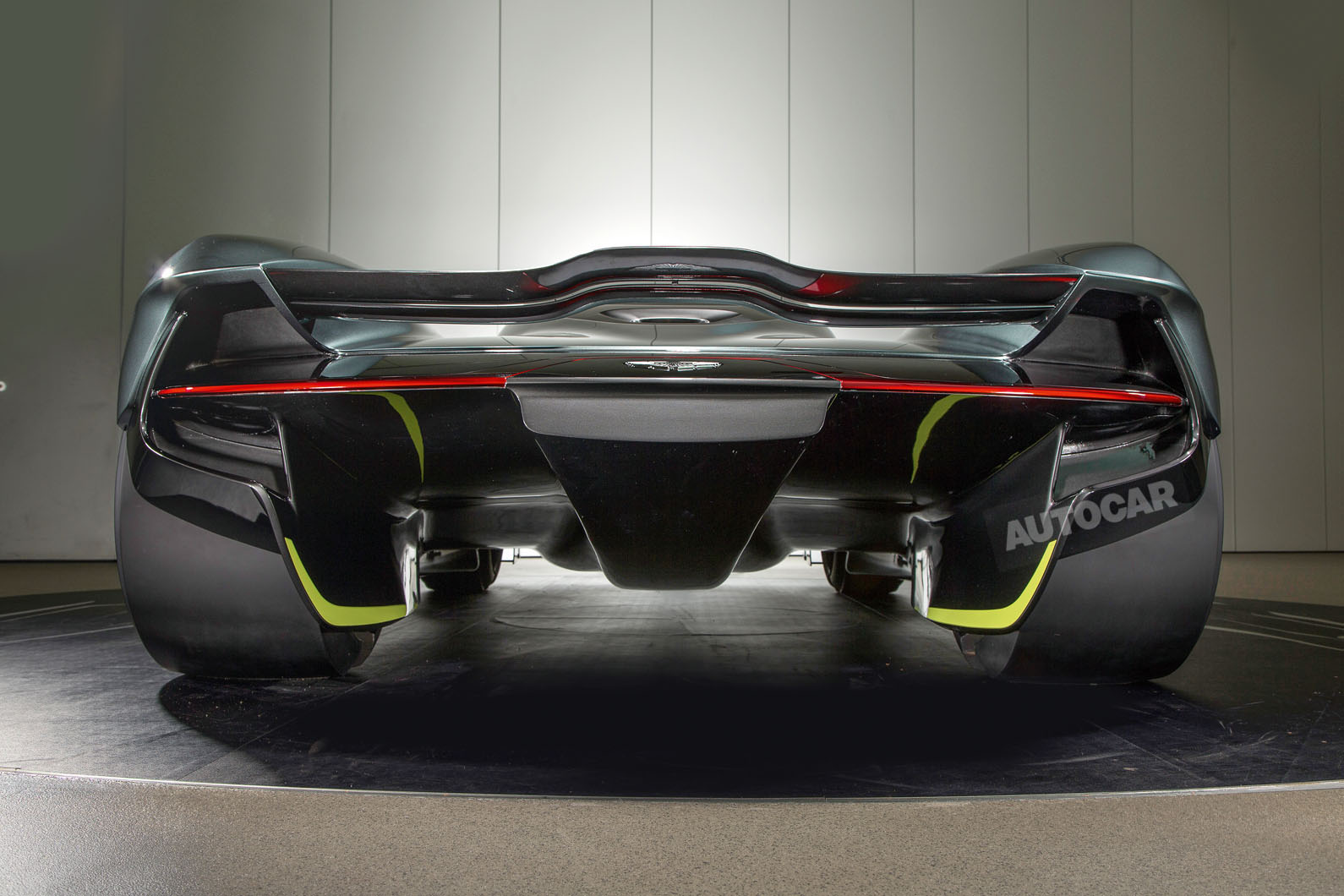 After dihedral doors were considered, Aston Martin and Red Bull opted for gullwing doors to make entry to the cabin as easy as possible. “You stand in the car and drop yourself down into it. The steering wheel comes off to aid that,” said Nurnberger.

From the cabin rearwards, the car has “an F1 layout” for its cooling, engine and transmission systems. A “high-revving, high-capacity” V12  provides the power. The mid-mounted, naturally aspirated unit is bespoke, bearing no relation to the twin-turbo 5.2-litre V12 used in the new DB11. Aston is tight-lipped on precise power output, saying only that it’s aiming for a 1:1 power-to-weight ratio. A lightweight carbonfibre structure is expected to help keep the car’s weight below one tonne, which implies an output in the region of 900bhp.

There’s also an F1-inspired energy recovery system (ERS) to harvest kinetic energy from braking. Aston won’t say if this power will be used to augment the V12’s output. Intriguingly, the company has said the car has no reverse gear, so reversing could be done via power harvested by the ERS. 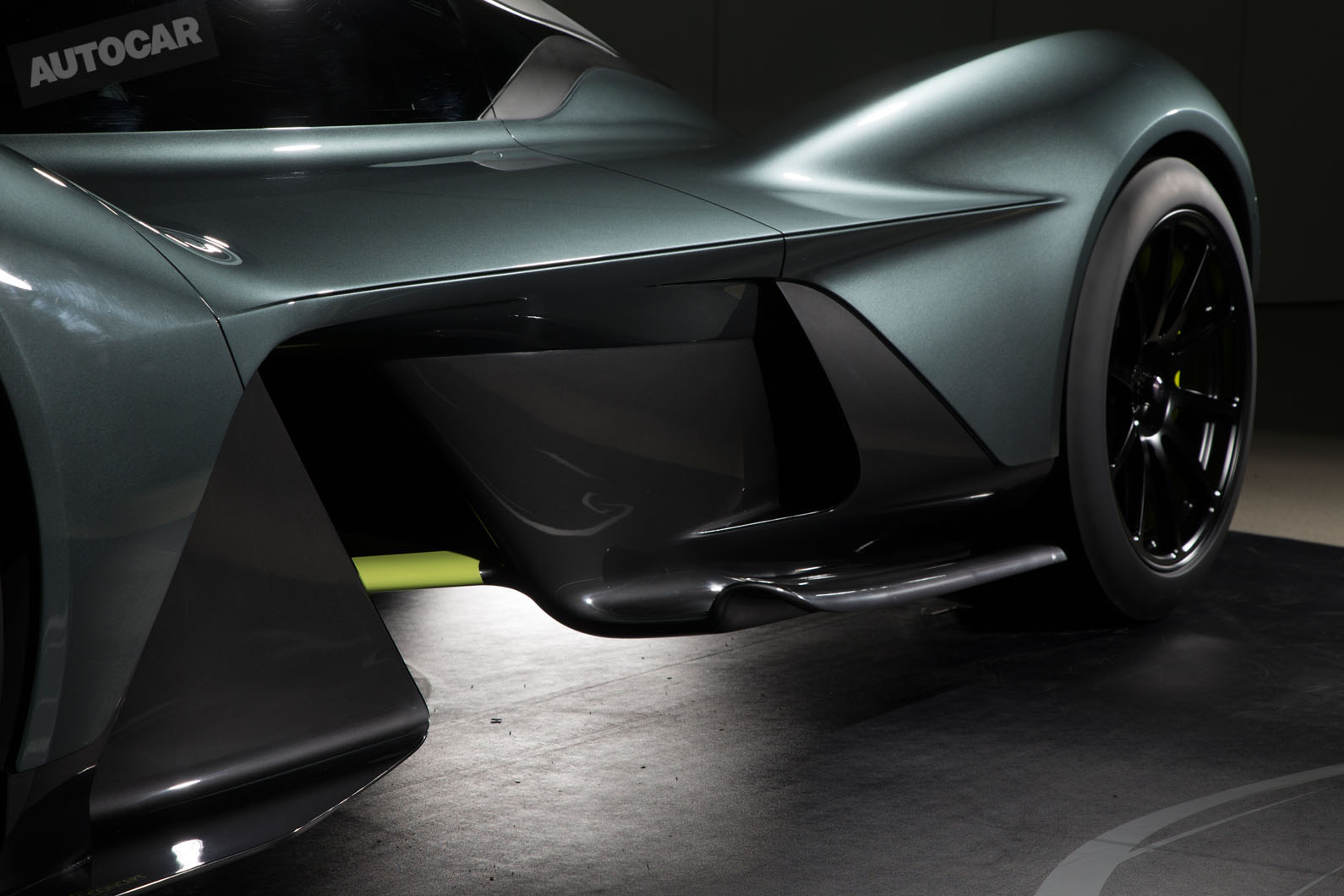 There will be some slight visual differences between the road and track cars, with the track version having wider front wings, bigger tyres and a bigger rear aerofoil.

Under the skin, there will be some more significant changes to the running gear and carbonfibre suspension is being contemplated for the track version. The car will have switchable driver modes, including an extreme track mode, with suspension that can be lowered.

The AM-RB 001 has a small, adjustable, two-plane rear spoiler. “The rear wing will be an active element, but it doesn’t actually do that much. All it is doing is controlling the air off the top surfaces of the car,” said Palmer. “With your rear aerofoil, you want to cut the laminar flow and then you want to cut it as fast as you can so you don’t create drag. So you want it as far back as you can get it on the car within the limit of the regulations.”

The engine’s exhaust exits from the centre of the rear bodywork and blows air onto the rear wing — an extrapolation of the ‘exhaust blown diffuser’ idea that was pioneered by Newey in F1 a few years ago.“On the final car, the exhaust is going to move slightly more rearward in the package to have a great effect on the rear wing,” said Palmer.

Aston is promising that the AM-RB 001’s futuristic feel will extend to the interior, which it will show at a later date, when it will also reveal specifics about the powertrain. 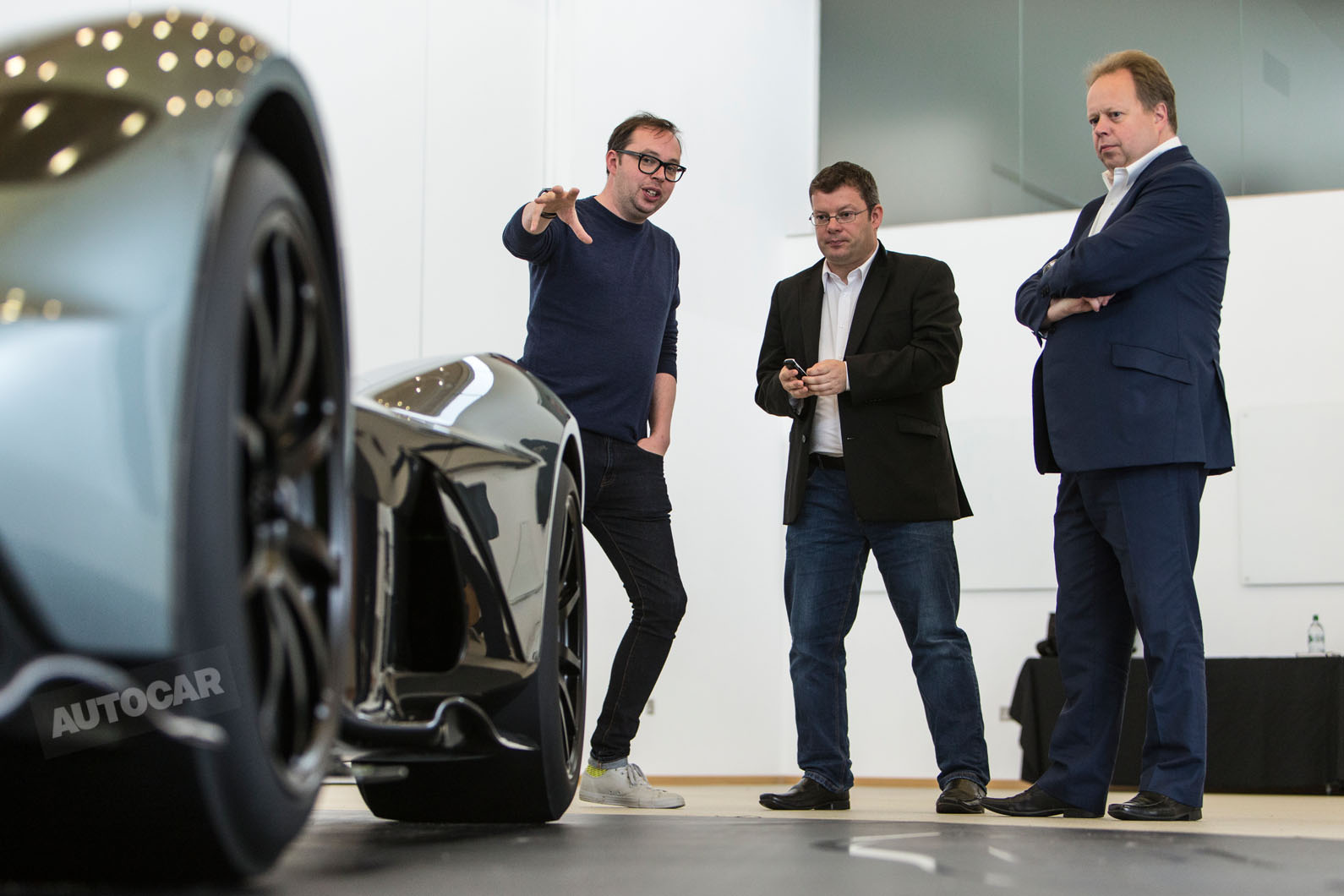 The first prototype will begin testing in the middle of next year. The task of engineering the AM-RB 001 will be shared between Q by Aston Martin Advanced (the company’s special projects division) and Red Bull Advanced Technologies, with production taking place at Gaydon.

The AM-RB 001 is scheduled to reach owners in 2018. Palmer revealed that “more than 300 expressions of interest” had been received for the car after it was shown to a select group of potential customers in Monaco in May.

The car’s price is put at “£2-3 million” and those invited to buy one will be expected to lay down a deposit of £500k. Aston enthusiasts who have previously bought a limited-edition car such as a Vulcan or One-77 will get a guaranteed place on the waiting list. Half a dozen people are keen to buy both road and track variants.

“Deciding who will be considered for a car is a relatively new headache for us,” said Palmer. “With Aston Martin Vantage GT12 and GT8, Vanquish Zagato and this, I don’t think Aston has ever been in a situation where it has to invite customers to buy. It is a nice problem and it bodes well for DB11, which is also significantly oversubscribed.”

Does the AM-RB 001 have a racing future?

More info on the interior, track version and whether an AM-RB 002 could happen

A recognition of LMP1 designs

One thing that strikes me about this car is its appearance in that it seems like a current sport-prototype that's been converted and watered down for everyday road use. Nothing remarkable about that it might be said, but to me it shows that the current breed of LMP1 cars are the design and engineering pinnacle for cars with a closed cockpit and enclosed wheels. So a car like the AM-RB 001, a car with virtually no constraints to be designed against, so closely emulates LMP1 cars is a shot in the arm for sportscar racing and proves that LMP1 cars are the ultimate in automotive design and engineering alongside F1 cars.
hedgehopper 6 July 2016

And the point is?

It couldn't be used on the road in the form it is shown. Sharp edges dangerous to pedestrians. (But they don't matter).

I would buy a high performance car if I ever won the Lotto, but it would be built by an established maker with a tradition of sound engineering pedigree and not look as if it had fallen off the side of the car transporter and down some stone steps.