BACK TO ALL NEWS
Currently reading: Aston Martin and Red Bull to build 'next generation' hypercar
UP NEXT
Lamborghini to prioritise unexpected specials over retro cars

Aston Martin and Red Bull to build 'next generation' hypercar

Aston Martin and Red Bull - traditional supercar maker and the championship-winning F1 constructor - have confirmed they are working on a project to design and build “the next generation hypercar”, which insiders say will be superior in acceleration, top speed and circuit performance to any road car ever made, and likely to be superior to all but the most focused race cars.

News of the joint Aston Martin and Adrian Newey-led Red Bull project was first broken exclusively by Autocar last summer, but the project was formally confirmed today ahead of the F1 season-opening Australian Grand Prix.

Badged an Aston Martin but currently known by the codename AM-RB 001, the car is being created in a specially dedicated design studio inside Aston Martin’s Gaydon HQ. Around 99 units will be manufactured by Aston’s bespoke Q division, which has recently produced the Vulcan track car, at a price understood to be between £2-3million.

First cars are tipped to reach their owners, expected to be super-rich “collectors and like-minded friends”, by 2018, but Aston Martin will have a mock-up to show potential owners within a few months. Aston’s GT race partner, AF Racing, will assist with sales and servicing of the cars. Vulcan owners, of which there are 20 so far, will be offered first refusal on the car.

Comment: Could the Aston Martin AM-RB 001 race at Le Mans?

The project has grown out of an extraordinary personal partnership between Red Bull’s Adrian Newey, widely described as the world’s greatest race car designer, and Aston Martin design boss Marek Reichman, who has already designed a generation of Aston production cars plus several James Bond Astons and a plethora of special editions including the Vulcan. Aston boss Andy Palmer recently announced that the company would in future design two “special editions” every year: AM-RB 001 is to be one of them.

Palmer has confirmed the car will be of a mid-engined layout, which will be a first for an Aston Martin. He also revealed that it will feature a KERS-style drive system and a race series will be set up for the cars. 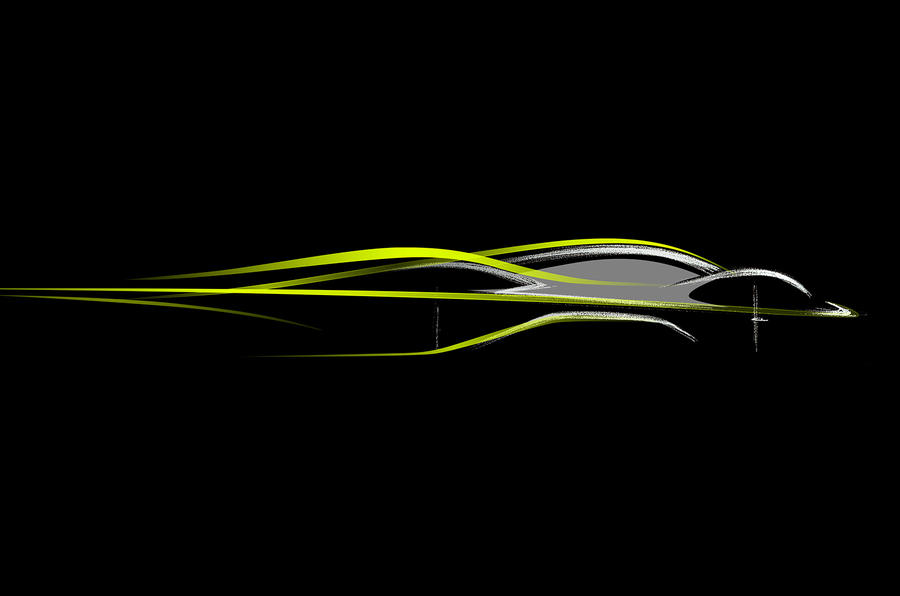 The project is already being described as Adrian Newey’s “legacy car”, a creation as important to his reputation as the McLaren F1 has been to Gordon Murray. Newey has long been on record as wanting to build a very special road car; this is understood to be it. “I see this as a chance to work with someone I regard as a genius and one of my heroes,” design chief Marek Reichman told Autocar exclusively. “AM-RB 001 represents a completely different way of thinking.”

Adrian Newey has already shown the direction of his thinking on road cars by designing a road-going, covered-cockpit F1-style virtual single-seater called X2010 for the computer games Gran Turismo 5 and 6. This spectacular creation proved so popular that a full-sized model of the car was subsequently made by the game’s creators and shown at the Goodwood Festival of Speed in 2014.

At the event in Melbourne to confirm the project, Newey confirmed: “From the age of six I have had two goals in life – to be involved in the design of racing cars, and to be involved in the design of a super car. Whilst the former ambition went on to form my career to date, the latter has always bubbled away, resulting in countless sketches and doodles over the years.

"The opportunity to now develop and realise those ideas whilst working with Marek and his colleagues from Aston Martin is tremendously exciting.  It allows us to translate the technology we have developed in F1 into a new arena."

As another indicator of the increasingly strong links between Red Bull and Aston, the pair are also announcing a deal for 2016 that will see the Aston Martin wings carried on the nose and flanks of Red Bull’s racing cars. The deal will commence at this weekend’s season opener in Melbourne, Australia. “F1 offers the ultimate global stage to build wider awareness of the Aston Martin brand,” said Aston boss Andy Palmer. “However, this partnership will deliver even more when the hypercar that Aston Martin and Adrian Newey are in the process of developing hits the road.”

Red Bull and Aston Martin are currently unwilling to reveal details of the car’s mechanical layout beyond the fact that it employs an F1-style recipe of very sophisticated aerodynamics, carbon fibre construction and “super aggressive” weight targets. They say performance is in the realm of current F1 and WEC cars; no road-going car will be anywhere near as fast. At this stage they are releasing nothing but a design sketch of the car that gives very little information about the mechanical layout.

The car is a mid-engined two-seater, a layout that could provide Newey with the weight distribution and low frontal area he will need for race-level performance in a road car

Likely to be a petrol-electric hybrid

Aston sources suggest this will not be a pure battery car, which leaves the strong probability that it will be a petrol-electric hybrid, probably with simplified versions of the performance-boosting electric motors and energy recovery systems of WEC and F1 cars. There is no guidance yet on the identity of the petrol motor, though, although speculation suggests something compact, such as a detuned race engine, is possible. The suspension layout is tipped to be a race-style double wishbone system complete with pull- or push-rods, bellcranks and inboard--mounted suspension units in the style of today’s top-end racing cars.

Although he wouldn’t be drawn on specifics, Reichman indicated the AM-RB 001’s likely to have an all-carbon structure when he said that Aston Martin would not have had the technical capability to make the hypercar if it hadn’t built the One-77 and Vulcan (pictured below) models. “Though AM-RB 001 is very different, these cars helped open our minds,” he said.

Reichman says the new car will be recognisable as an Aston and carry an Aston badge on its nose, even though it takes Aston design (which until the Vulcan and new Aston Martin DB11 era has been related to a design direction established in 2003 with the new DB9 and the new Gaydon factory) in “a completely different direction”. 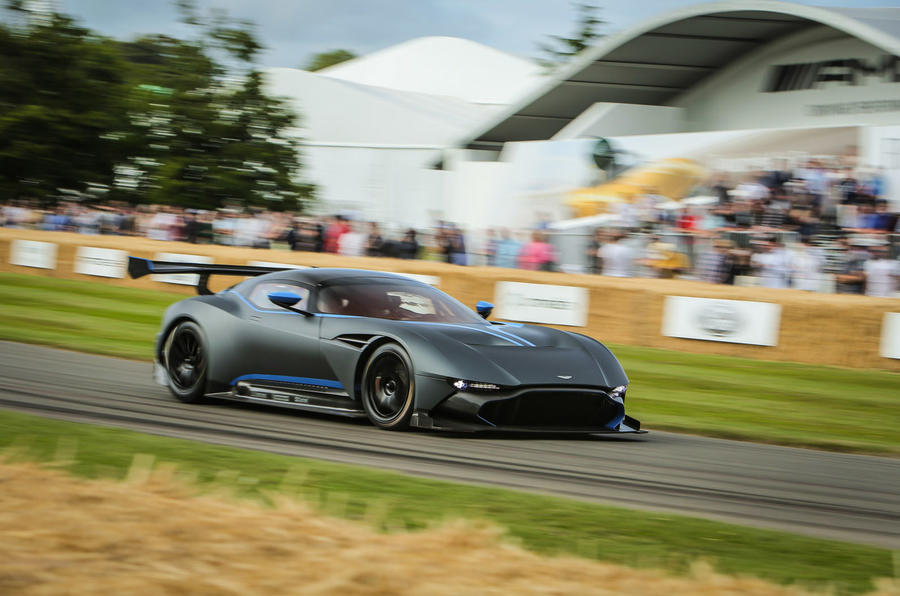 “You’ll know this is an Aston Martin,” said Reichman. “But what makes it different is that it’s so functionally led - by aerodynamics. Yet Adrian and I have usually found we have a singular vision: he is clear on how simple and pure it needs to be; I understand how vital aero is to the car’s total capability. Besides, what affects aero is usually waist-down, as it were, whereas the things that identify a car as an Aston tend to be waist-up. We’ve created something that simply shows how wind and air would affect a shape of these proportions. Concorde has always been a supreme example of that.”

Comment: Why the Aston Martin Red Bull AM-RB 001 could be the car that defines a decade

Reichman added that both he and Newey appreciate the freedom from FIA-style racing constraints, but face different constraints from making the car road legal. “I’m enjoying it,” said Reichman. “When we did the world’s most expensive sports car, One-77, I thought things could get no better. But then we did the Bond cars and the Vulcan. Now partnering Adrian Newey in this project, that trumps everything.”

The car’s name has already prompted speculation that if the project is a success it could lead to further road car collaborations between the partners. Sources have suggested that a car in the more traditional supercar bracket of around £250,000 could follow, although Aston Martin personnel refused to be drawn on the speculation.

Why is there NEVER coverage of Ultima? As Ken Brunton said, they blew away the TG lap record in a car costing about a 30th of the FXX and they ripped up the record as they said it wasn't street legal, which it most certainly was. And British. And a great story of a man (almost) in a shed and blowing away the millionaires. I would LOVE to see at least one proper road test of this most amazing machine.
bowsersheepdog 18 March 2016

As to the AM-RB 001, I speculated on these pages when Newey announced he was winding down his direct F1 involvement, whether he may have a go at making the X2010, and its Gran Turismo developments, into a real world car. If he comes anywhere close with this collaboration with Aston Martin, it will be a true Concorde moment, moving the state-of-the-art to a new level. I would love to see it reach fruition.
bowsersheepdog 18 March 2016

One cannot help but wonder whether Aston Martin may be getting a little further involved in F1 than they are currently letting on. Red Bull have not been happy with the engines with which they have been supplied over the last couple of seasons, and there was talk last year that they may have been investigating making one of their own. A partnership with Aston to design and build that engine together may be an option.
View all comments (13)