BACK TO ALL NEWS
Currently reading: 2022 Ford Fiesta: updated hatch seen in ST-Line and entry trims
UP NEXT
Fisker goes radical with Pear EV SUV

Popular supermini is due to be refreshed after four years on sale, with design overhaul at each end
Open gallery
Close

Just a few weeks after we caught sight of an updated Ford Fiesta Active running around on European roads, camouflaged test mules of the high-spec ST-Line and entry-level variants have broken cover.

The popular supermini has been on sale for nearly four years so is due a substantial mid-life update to keep it competitive in light of newer rivals. The newer Vauxhall Corsa - which has an electric option, unlike the Fiesta - is currently outselling the Ford in the UK, and the Volkswagen Polo, Skoda Fabia and Seat Ibiza have each been substantially updated - or moved to new generations entirely - in recent months.

As was the case with the Ford Focus mule spotted recently, the Fiesta looks to hide a new-look front end under its bulky camouflage. Unusually, the supermini's front grille looks to have been reduced, rather than expanded, for the facelifted car, and new designs have been ushered in for the headlights and lower bumper. 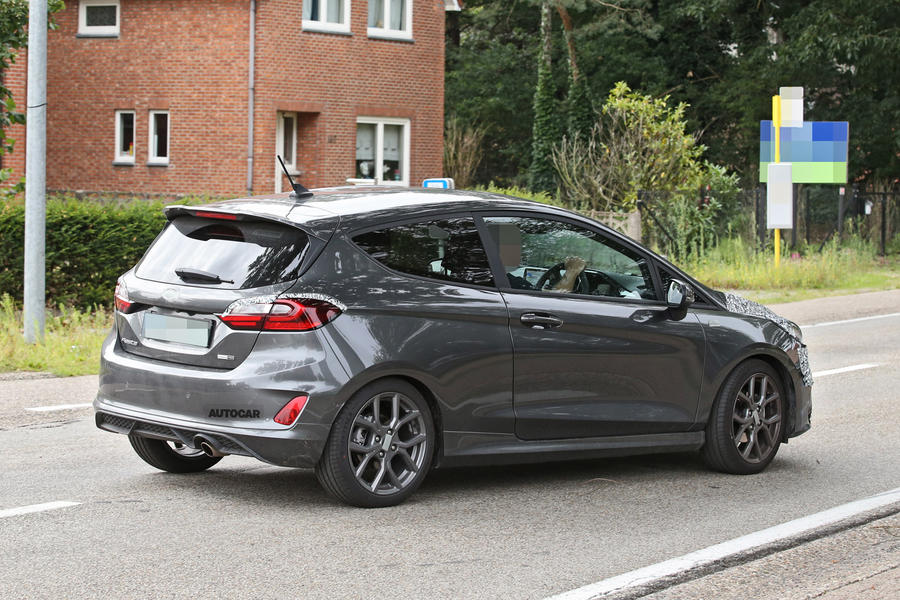 At this stage, changes to the rear end look to be a lot more subtle; the layout of the disguise suggests we will see new-shape brake light clusters and potentially a restyled bootlid. The jacked-up Active variant, meanwhile, wears chunky body cladding and roof rails and rides higher than the standard Fiesta.

A more subtle model year update in 2020 removed diesel power from the Fiesta in the UK, while a new 48V mild-hybrid petrol option was added to the line-up. Ford's smallest car is now powered exclusively by a 1.0-litre turbocharged three-cylinder engine - with or without electric assistance - in its standard form, with a choice of power outputs. The Fiesta ST performance variant uses a 197bhp non-hybridised 1.5-litre unit.

There have not been any indications of significant alterations to this powertrain line-up for the facelift. The newer Puma crossover, which shares the bulk of its underpinnings with the Fiesta, uses the same engines, and the lack of any warning stickers or obvious charging ports means these protoypes aren't testing a new plug-in hybrid powertrain.

Ford recently announced plans, however, for its European passenger car line-up to be entirely electric by 2030, and as part of that, it will introduce a PHEV version of every model by the middle of 2026.

The timings of the company's strategy place question marks over the Fiesta's future, as the current car's lifecycle is set to end in 2024/2025, but any ICE variant introduced after that date would have only a few years on sale before Ford ditches fossil fuels.

The factory that builds the Fiesta in Cologne, Germany, is to be transformed into an EV production hub and will first produce Ford's "first European-built, volume, all-electric passenger vehicle for European customers" using Volkswagen's MEB EV platform.

The current Fiesta is scheduled to be built alongside the new electric car until the end of its production run.

Ford line-up to go all-electric in Europe by 2030​

Nice to see that Ford look to be continuing to offer customers the choice of 3 or 5 door bodystyles. Its a shame more manufacturers don't do this.

Can't understand why Ford never did an RS, with EV or PHEV I'm sure Ford could've come up with a Fiesta RS.