BACK TO ALL NEWS
Currently reading: 2021 Jaguar XF Sportbrake: facelift previewed in new images
UP NEXT
Ford to revive more historic model names for new cars

Jaguar is readying an extensive mid-life upgrade for its XF range, and we've now seen the Sportbrake variant testing with minimal disguise.

Following the updated XE and tipped to arrive before similar revisions to the F-Pace SUV in the coming months, the executive car will benefit from design updates along with a raft of technological improvements aimed at restoring its competitive edge to the BMW 5 Series, Mercedes E-Class and Audi A6.

These new images reveal that the facelift will bring new bumpers at the front and rear, as well as slimmer headlights in line with the recently facelifted F-Type.

Speaking to Autocar in 2019 at the new XE’s unveiling, senior product planning manager Wayne Darley said the XF was “the next priority”.

The changes will be as significant as the XE (shown below), with evolved exterior looks but significant cabin upgrades, focusing on a substantial boost in perceived quality and new technology features. Like the smaller saloon, the XF is set to adopt features from the I-Pace, including a new secondary central screen for the climate control functions and a new steering wheel. 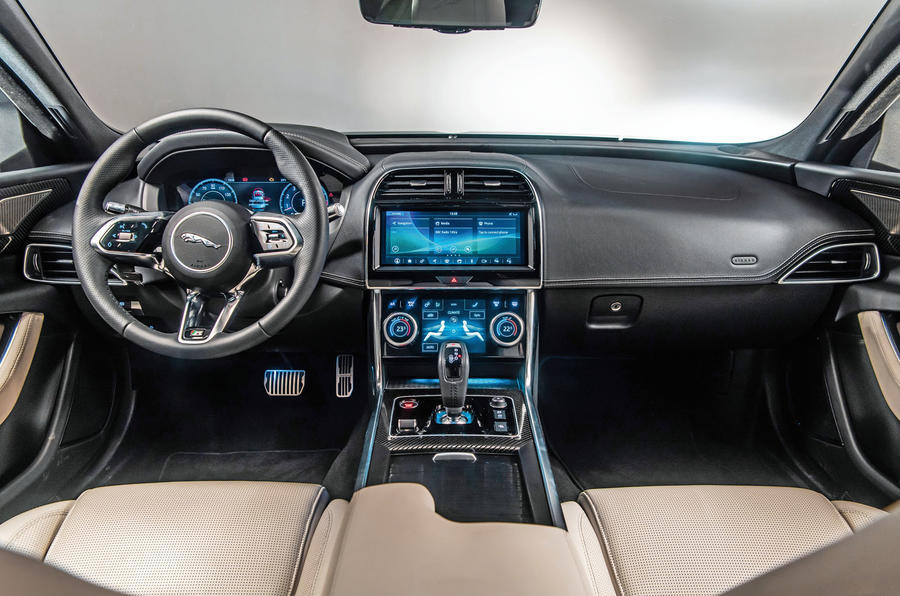 Both cars will also join the XE in receiving RDE2-compliant diesel engines, which Darley said required a “huge push” on the engineering side to ensure the XE was the first car in its class to market with the ultra-efficient engines ahead of an emissions regulation change in 2021.

What remains unclear, however, is whether the XF S will return. The new XE will no longer be available with the supercharged V6 S variant for the rest of its lifecycle, while V6 petrol and diesel versions of the F-Pace and XF are no longer on sale.

Jaguar Land Rover has released a new inline six-cylinder petrol engine in the Range Rover Sport, but with the XE S axed due to slow sales it remains to be seen whether that engine will return to the larger models.

The prototype spied previously sports a petrol powerplant, according to number plate data, but there is no indication it uses a mild hybrid system as such checks commonly reveal. It remains to be seen if the model will benefit from the same efficiency-boosting 48v electrified system as its Land Rover cousins - but given the XF's older platform, it's not likely.

But isn't the photo of the

But isn't the photo of the interior that of the revised XE not the XF? (Unless Jag decided to make the two interiors the same!)

Hope jaguar product folks read some of the comments

Lot of owners and potential owners with some feecback! I still remember hurrying down to dealer to see second gen XF saloon and being flabagasted that the interior was a step back and exterior styling lost its elegance. So since everyone loves mk1  Anyone want to buy my XFS sportbrake 39k fsh ☺

Such an unappealing interior

Such an unappealing interior (ditto XE, F-Pace etc.) is unlikely to attract new customers. To improve on interior design, Jaguar needs look no further than its in-house companion Land / Range Rover for isnpiration.