BACK TO ALL NEWS
Currently reading: Volkswagen Roomzz concept previews 2021 Model X rival
UP NEXT
Motoring heroes: the most inspiring people in the car industry

Volkswagen has extended its range of ID concepts to include a new 302bhp electric-powered SUV, known as the Roomzz. Unveiled at the Shanghai motor show, the contemporary seven-seater acts as a preview to a production model of similar size and shape Volkswagen says will be launched in 2021.

It’s a crucial part of the German car maker’s plan to become the world’s leading manufacturer of electric vehicles by the middle of the next decade. Set to be positioned above the upcoming production version of the Crozz and a more sporting Crozz Coupé, the Roomzz is said to offer interior space superior to that of the Touareg in a body measuring 4915mm in length, 1890mm in width and 1760mm in height.

Despite its status as a global car for the brand, Volkswagen sales and marketing boss Jurgen Stackmann claims that the European market "is not an immediate priority" for the ID Roomzz.

"Key markets for this car are China and North America. These two countries love space. I wouldn't reckon that ID Roomzz will be a core model [for Europe]". Stackmann went on to cite cars such as the ID hatchback and Tiguan-sized ID Crozz SUV as the core EV priorities for Europe.

However, VW's design boss Klaus Bischoff has since confirmed that it will indeed come to Europe, but markets such as China and the US will be prioritised first.

“The ID Roomzz shows us what we can expect from full-size electric SUVs in the future,” said Bischoff. “The puristic look emphasises the clear function and the user experience is intuitive and natural. Plenty of space inside allows for completely new seating configurations.” 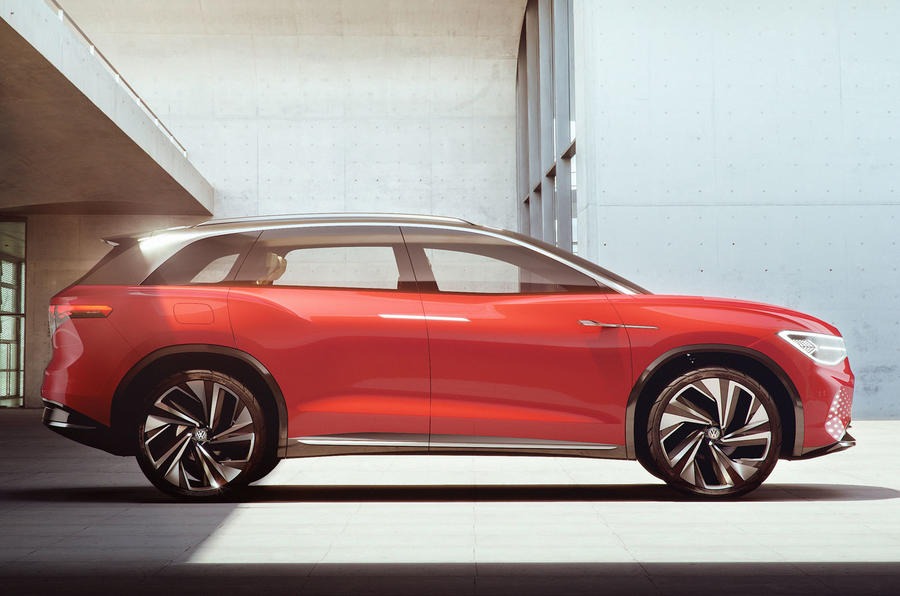 The sixth ID concept is based on a new variant of VW’s MEB platform. It has a wheelbase of 2965mm – some 192mm longer than the Crozz’s but 135mm shorter than that of the Buzz.

Developed under the internal codename VW316 and previously dubbed ID Lounge, the Roomzz gets its own unique styling that Bischoff describes as featuring “seamless transitions of individual elements” for maximum aerodynamic efficiency.

Key cues include an almost completely enclosed front end featuring illuminated horizontal elements that act as a grille and extend outwards into in the outer edges of the headlights to provide the new SUV with exaggerated visual width. Also included is an illuminated VW badge – a feature Autocar can confirm will be offered as an option on all upcoming ID production models in markets where it is permitted.

The Roomzz also receives prominent front wheel arches and a side feature line that runs back through to the middle of the front doors. Traditional exterior mirrors are replaced by a camera, which is mounted on a discreet arm within the leading edge of the front doors. The doors open on opposing hinges, providing uninterrupted pillar-less entry to the cabin. 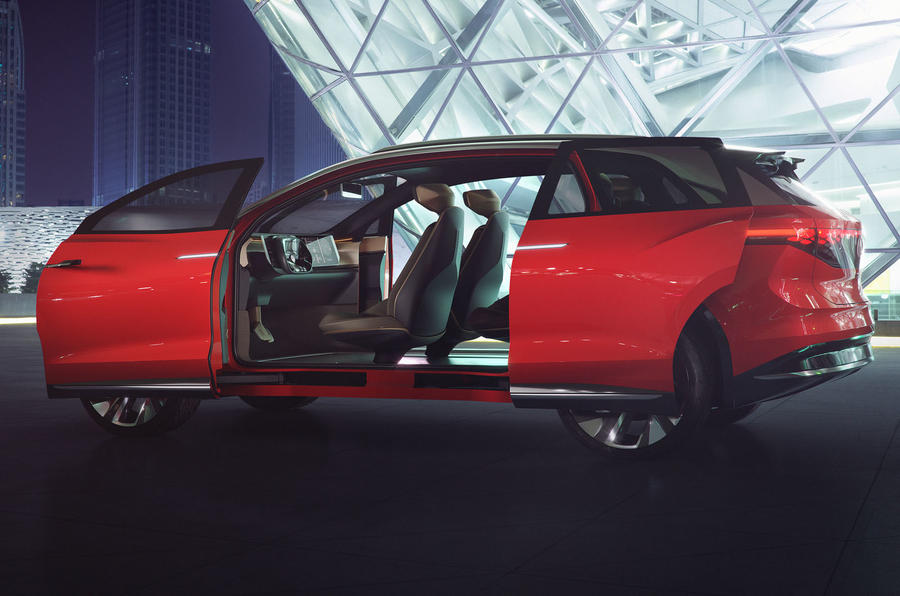 Also evident is a rounded roof turret. It houses two Lidar units that form part of a level four autonomous driving system VW is touting for future ID models. Contrasting aluminium is used for the roof rails, while the side glass is almost completely flush with the bodywork to smooth airflow along the flanks. To highlight the interior, the concept also goes without a B-pillar.

The rear is distinguished by a full-width light band whose graphics can be customised via a smartphone app. “Lighting is the new chrome,” said Bischoff of the possibilities made possible by the latest generation of LED lighting.

Previewing the cabin design VW proposes to provide future models with advanced autonomous driving functions, the Roomzz features a digitised steering wheel. It is designed to retract back into the dashboard when the driver chooses a fully autonomous driving mode. 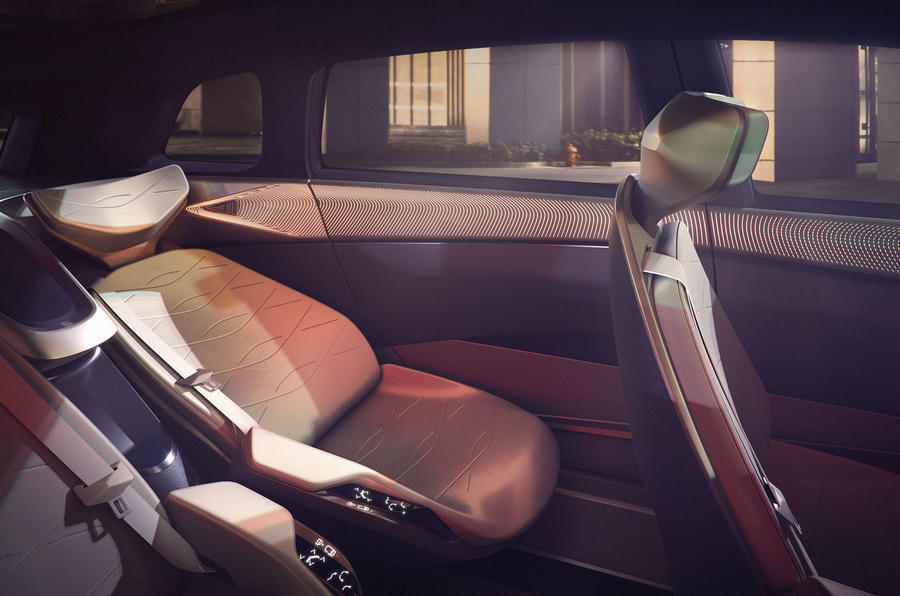 Although the new concept features four individual seats, VW insiders have confirmed the production version is planned to provide seating for up to seven in three rows of seats.

Power for the Roomzz comes from the same electric driveline previewed by the earlier Vizzion. It uses two electric motors – one acting on the front axle with 101bhp and 103lb ft and a more powerful unit at the rear with 201bhp and 228lb ft. The total system output is 302bhp and 331lb ft.

Depending on the driving mode, the new SUV can be driven by the rear wheels as standard or all four wheels. VW quotes a 0-62mph time of 6.6sec and a top speed that is limited to 112mph.

Electric energy for the motors is provided by an 82kWh lithium ion battery mounted within the flat floor structure of the Roomzz’s MEB platform. It is claimed to provide a range of 280 miles on the WLTP test cycle, while the charge time to 80% of the battery’s capacity on a highpower 150kW system is put at “approximately 30 minutes”.

Looks sweet but the production version will be totally different

Just another concept car teasing the future. The production version will most certainly be missing the sliding doors, the fancy day time running lamps at the front & the over styled rear lamps. The interior will also look plain boring too.

Another over powered SUV

I believe the more powerful the battery, the greater the range provided you don't drive hard.

And they currently also need more power than ICE cars becasue of the extra weight of the battery.

Another day, another VW EV concept

Their concepts are all very nice, I’d love to buy an ID buzz, but until they actually put some on sale all these concepts are just distractions.

VW's concept EV range is gaining a coherent and distinctive design language. Its design purity (in terms of overall idea as well as in detailing) far surpasses Mercedes and BMW's EV range.

My interest is in the absence of a B-pillar. How is it possible on a full sized EV where conventional cars have thicker and thicker pillars?

My interest is in the absence of a B-pillar. How is it possible on a full sized EV where conventional cars have thicker and thicker pillars?

It is possible because this is only a concept. They may claim this will be on sale in 2022 as a rival to the Model X, but in reality it will be a productionised version of this concept, which I’m sure will have a B pillar and probably conventional rear doors.

Thats what I mean about these concepts all being a distraction, they are intended to distract peoplefrom buying Teslas etc right now on the promise of these exciting models ‘coming soon’.

"Lighting is the new chrome".

"Lighting is the new chrome". I'd rather not have an excess of either. All the lighting on the front end in particular is going to create an excessive amount of glare for oncoming traffic, when its lit with the headlamps on, as seems to be becoming the norm. Where did all the lighting regulations go? And what happened to subtlety?

"Lighting is the new chrome". I'd rather not have an excess of either. All the lighting on the front end in particular is going to create an excessive amount of glare for oncoming traffic, when its lit with the headlamps on, as seems to be becoming the norm. Where did all the lighting regulations go? And what happened to subtlety?

what cars are over lighten at the moment?? and if you are talking about this then how do you know about the glare?

I could start with the MINI

I could start with the MINI range. Bright LED headlamp ring, LED headlamp, LED sidelight in a seperate unit, all lit at the same time. There are various other models on the market retaining an excess of front lighting to portray their lighting 'signature'  at night time. On damp winter roads the glare is especially bad, and unnecessary.