Following the unveiling of the overhauled A3 in March, Audi is gearing up to launch the hot S3 variant – and our snappers have caught it undisguised in saloon and hatchback forms.

Prototypes spotted testing at the Nürburgring appear to be production-ready and bear a similar evolutionary look to the standard car. We've driven a heavily camouflaged S3 prototype, but these new images show off the model's subtle, performance-oriented styling tweaks.

As with the outgoing car, the S3 will adopt a set of quad exhaust pipes housed in a diffuser-style rear bumper, bespoke performance alloy wheels, larger brake discs and slightly extended wheel arches for a sportier stance. Bespoke badging at the front and rear, not featured on these prototypes, will also likely feature. 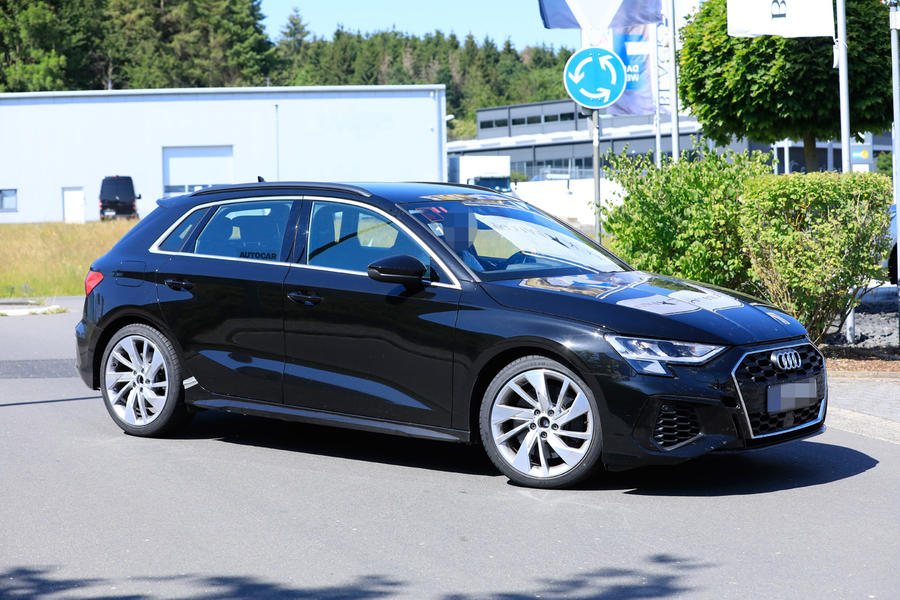 The S3, which is set to get more power and a significant technology upgrade, will be part of an 11-strong A3 model line-up due before 2022.

Revealed in five-door hatchback form, using the current car's MQB platform, the A3 will also offer four-door saloon and, eventually, five-door liftback variants. The liftback is expected to take the Sportback name as the three-door A3 was discontinued in 2017.

The other variants will also gain S3- and RS3-badged models. With competition from the new BMW M135i and Mercedes-AMG A35 in the 300-335bhp bracket, the S3 will pack 306bhp and 295lb ft by using the Volkswagen Golf R's 2.0-litre turbocharged four-cylinder engine. Performance figures are likely to improve over the current car's but remain under wraps for now.

The outgoing car's quattro four-wheel drive and progressive steering are carried over, but a new damper system and central dynamic control function bring subtle changes to the S3's dynamic character.

The RS3, meanwhile, will increase in power in the face of 400bhp-plus opposition from the Mercedes-AMG A45. It'll keep the 2.5-litre five-cylinder unit from the current car, updated to meet the latest emissions regulations, but should share its 394bhp output with the recently launched RS Q3.

This 11-car line-up will span all the bases covered by the Mercedes-Benz A-Class hatchback and saloon and CLA coupé ranges, including the 35- and 45-badged AMG variants.

The styling of the new A3 follows the rest of the Audi range with a more geometric front-end treatment and sharper tail-lights. Audi's Virtual Cockpit features as standard, with a choice of two infotainment screen sizes, advanced voice control and a migration away from physical switchgear.

I've a 2018 S3 Sportback and externally this looks exactly the same other than a new bumper and lights.. and more of these dashboard screens

Its a nice car that goes fast but its so dull to drive, Id rather have a Golf Mk7 GTI with a manual gearbox. At least then there is some real driving interaction to be had.

I have never driven an Audi

I have never driven an Audi that wasn't entirely competent and always fast enough to match or beat the competition in a straight line. Unfortunately, they don't ever seem very exciting or satisfying to drive though.

Yes, it'll be fast, agile even, but, I was only saying yesterday to the Wife that I though the rear was not nice to look at, especially in White.