BACK TO ALL NEWS
Currently reading: First drive: 2020 Audi S3 prototype
UP NEXT
Volkswagen ID Buzz to kick-start wave of enthusiast-oriented EVs

It’s a formula as well known as E=mc2: a compact car offering practicality, refinement, comfort and a healthy dose of ‘premium’ cachet. If you’re not thinking Volkswagen Golf, the very obvious answer is the Audi A3. But despite us seeing a new Golf, and very recently a new Seat Leon (on the same Volkswagen Group platform, of course), we haven’t seen much of the new A3 – until now. Unusually, our first experience of Audi’s latest family hatchback is of the hot hatch variety; the latest S3, driven in prototype form in the Azores.

Now, even in the third-generation A3’s old age (apparently this new car was delayed due to Audi prioritising development of its electric E-tron models), it holds its own on the battlefield of the premium hatchbacks. Versus the BMW 1 Series and Mercedes A-Class, there’s been little between them on driving merit or sales volume. Come Geneva motor show, just weeks away, the fourth-generation A3 will arrive, and Audi is hoping, where they were neck-and-neck before, the model might finally be able to accelerate away from its German rivals.

So successful is the A3 that, by 2022, 11 derivatives are expected, including the A3 saloon, perfect for young execs and the Chinese market, and a liftback variant. The handsome three-door, ditched in 2017, won’t make a comeback, though. What will be returning, however, is the S3 that we’re getting our first taste of here.

Few flourishing compact cars exist without performance versions for the halo effect, and the A3 is no exception. The S3 effectively kicked off a new premium hot hatch class 20 years ago, when more mainstream brands led the market (Peugeot 306 GTi, Citroën Saxo VTR, Renault Clio Williams et al). Many others have followed: not only is there some serious competition within the walls of the Volkswagen Group (the Golf R, for starters) but also from the new all-wheel-drive BMW M135i, the Mercedes-AMG A35 and even from less premium but well-respected foes such as the Hyundai i30 N.

So why do we start with the S3 rather than any other variant of the A3? And why the Azores? Well, a quattro-equipped S3 prototype on an island famous for the Azores Rally just sounds like a good combination, doesn’t it? 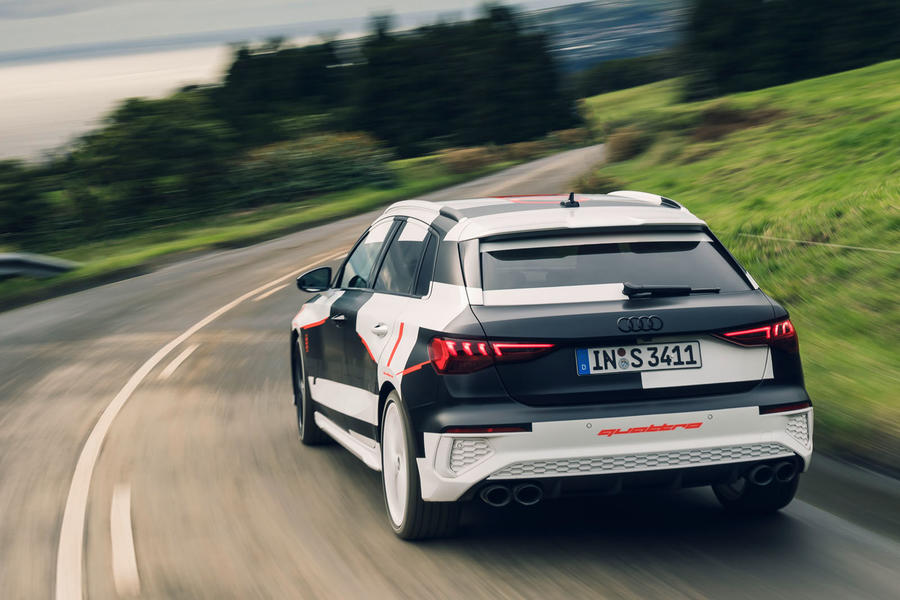 On paper at least, the S3 seems suspiciously similar to the outgoing model. It uses the same MQB platform, shared with the Golf R, the same 2.0-litre four-cylinder petrol engine delivering the same 306bhp and 295lb ft of torque. Normally, we’d expect power to increase for such models but Audi, just like every other car maker, has been battling with the complexities of emissions regulations and the knock-on effect that has to engineering gains.

Since this is only a prototype, Audi is keeping schtum on specifications including a 0-62mph time, but it’s safe to say it won’t be more than the outgoing model’s 4.7sec. Behind the wheel, that certainly feels the case: it’s the sort of straight-line performance that feels generous and well-placed for a hot hatch without being absolutely ridiculous – something the RS3 will no doubt cover off when it arrives…

There are four areas that Audi is keen to push during our prototype drive: quattro four-wheel drive, progressive steering, damper technology and Audi’s select mode. That’s because these four features are not only found on the S3 but are options across much of the upcoming A3 range.

The thing is, the S3 had all those features previously, so what’s actually new? Importantly, says engineer Sebastien Straasser, the way the technology all works together. “We now have a central dynamic control for systems including the dampers, quattro all-wheel drive and torque vectoring by braking. Now they all have the same information. For example, they will all know if the car is understeering and all act the same to counter it. When they were decentralised, one didn’t know what the other was doing.”

By doing this, plus a new damper system (see story below) and some other minor tweaks, Audi hopes to achieve this goal. “We wanted to improve driving dynamics to make it more agile, as well as having predictable driving behaviour. We also wanted to achieve a wider spread between comfort and dynamism.

And, finally, to improve efficiency without any impact on dynamism,” says Straasser. Some might say they want the moon on a stick… Stepping inside the S3, it’s instantly easy to become accustomed to its manner and that stays true whatever one throws at it. The charm of hot hatches, for this writer at least (and hopefully for many a wise Autocar reader), is how quickly they are your friend: fun on the road but without a supercar’s intimidation. 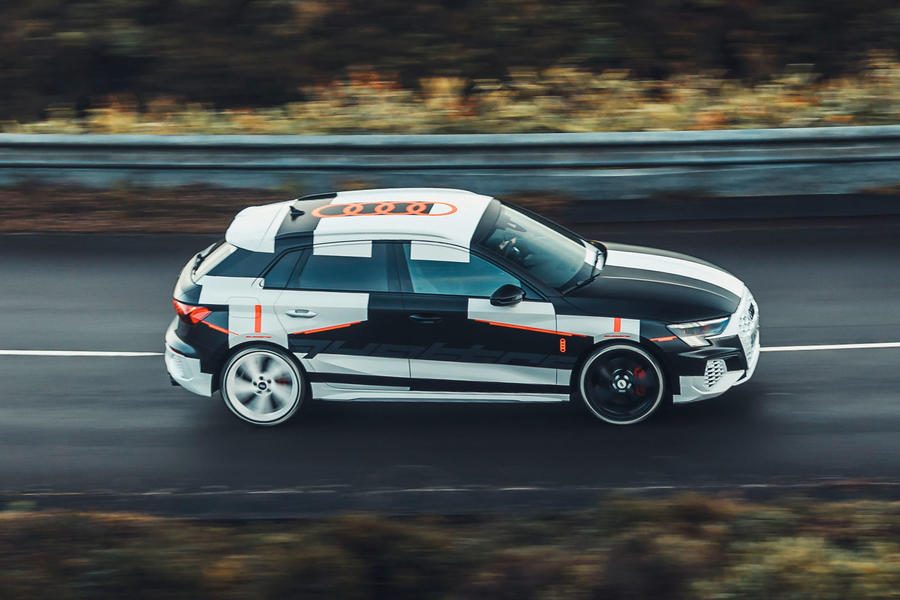 That couldn’t ring more true than with the S3, given its ability to make one feel safe and cosseted while allowing you to push the limits on windy mountain roads, as are found in the Azores. Of course, that predictability isn’t for everyone. For those who want to live life on the edge, you’d be likely to find more satisfaction in a Honda Civic Type R or Hyundai i30 N.

There’s appeal, nonetheless, in the well-roundedness of this S3 prototype, which we’re told is “very close” to the production car. The progressive steering – which hasn’t had any dramatic makeovers from its predecessor except to improve feedback – makes inputs effortless. Turn the wheel to a slight angle to hug a tight bend, and there’s rarely need for correction. Of the three steering modes, ‘Balanced’ is our favourite even on proper driving roads. ‘Dynamic’ mode veers towards the artificial whereas ‘Balanced’ is nicely weighted off centre.

The S3’s ride and refinement has always been a strong point, and this new S3 doesn’t let the side down. The Azores has some unexpected, long patches of cobbled streets, and in ‘Comfort’ suspension mode, the S3 positively soaked them up. Even in ‘Dynamic’, it wasn’t nearly as bad as expected.

The unchanged 2.0-litre petrol powertrain, paired with a paddle-shift seven-speed dual-clutch ’box (a manual is not available) does the job nicely. And it’s hard to believe the S3 will make it to the next generation without an electrified powertrain, so it’s worth enjoying this pure turbo while it’s possible.

For now, pictures of the interior are forbidden until the A3 is revealed at Geneva. Spoiler: it’s still as premium as you’d expect of an Audi but has fewer physical buttons. No surprises there, then. ‘S’ nods will be limited to a badge here and there and sports seats, while outside, there’s a more pronounced grille, bigger front and side skirts and some rumoured bespoke headlights.

The conclusion, then, might be as predictable as the car itself. This is a mature hot hatch (as it always was), one not looking just for cheap thrills but also everyday usability and comfort. It might not excite its owners in the way more raucous rivals will, but it’s still very deserving of its place at the top table.

Wow this looks as though it

Wow this looks as though it will be something to behold . Whoops I.m only dreaming looks like the last 2 models from the past . When oh when are Audi going to have a new design direction or am I the one that thinks they are just boring and without excitement MOVE ON Audi

With 2035 being the suggested cut off for ICE cars, I have a question for all owners, when your mid life crisis strikes, what car and ,will you be allowed by Law to drive?

OMG of all people to be saying that its you, hypocrite. Electric, ICE hybrid, its an Audio so it ll be an awful pile of cr*p whatever propels it.

OMG of all people to be saying that its you, hypocrite. Electric, ICE hybrid, its an Audio so it ll be an awful pile of cr*p whatever propels it.

I'm not keen on sticking big batteries and ICE's together, however I'm keen on one or the other. Not sure why I'm repling to a troll such as yourself but WHY DON'T JOG ON with anti me or anti VW/audi rants.