BACK TO ALL NEWS
Currently reading: 2019 Audi RS Q3 to keep five-pot for 362bhp-plus performance
UP NEXT
Mystery Ferrari LaFerrari prototype spotted with new bodywork

The 2019 Audi RS Q3 has taken to the Nürburgring during development and will retain the charismatic 2.5-litre five-cylinder unit from the current generation, albeit boosted to the 362bhp of the RS Q3 Performance model.

Other than upcoming in-house rivals such as the 306bhp Volkswagen T-Roc R and 296bhp Ateca Cupra, which are both far less powerful, the RS Q3 faces competition only from the Mercedes-AMG GLA 45. That car is nearing the end of its life cycle and will not be replaced until months after the regular GLA is revealed in 2019.

Sources revealed to Autocar that the new Q3 will be built in Gyor, Hungary, so the RS Q3 will follow suit. The five-cylinder engine is also assembled at the plant, so is almost certain to be used for the upcoming hot variant.

It’s not yet known if an SQ3 will join the range as a warm version, although no such model was made last time around; the SQ2 is the closest model in the range and is due in the coming months.

The RS Q3 will join a growing number of 3-badged cars as Audi prepares to replace the axed three-door A3 with a five-door liftback coupé, which is also expected to get S3 and RS3 variants. This model will take the Sportback name, with the five-door hatch badged A3.

The standard Q3 arrives on roads in November, but the RS Q3 will not be offered until a few months after this. A reveal is anticipated to take place early in 2019, so a Geneva motor show debut, like for the previous car, is possible, but not confirmed. Prices are certain to rise from the £44,785 of the current RS Q3 and £47,850 of the RS Q3 Performance.

Audi SQ2 due this year with 300bhp S3 engine 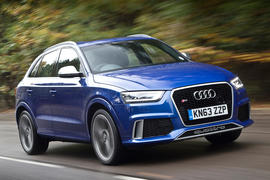 Too much choice these Days...?

Yes, I think so, you have umpteen Engine choices, interiors, suspension and so on, I guess they’ve done surveys and deduced this is what we want, well, couldn’t they with this info have just three or four options for us to make our choice from, a Vehicle that will satisfy most, end up with a boring Car market, all Cars looking essentially the same?, oh! Wait a minute.....?!