BACK TO ALL NEWS
Currently reading: 2016 Audi Q5 spotted with new grille and interior
UP NEXT
New Aston Martin DBR22 is £1.5m, V12 speedster

Audi will take on the BMW X3, Mercedes-Benz GLC and Volvo XC60 with its next-generation Q5 SUV
Open gallery
Close

Audi is taking renewed aim at the BMW X3, Volvo XC60 and Mercedes-Benz GLC with an all-new second-generation Audi Q5 - and these are the latest pictures of the model, revealing its new grille and interior details for the first time.

Although heavily disguised, a similar front-end treatment to the Audi Q7 is visible, with more angular headlights and a thick grille surround, finished in chrome. The shape is different to that seen on Audis of late, suggesting the new model could introduce a slightly different design language. More rakish lights also feature on the rear of the car, while the chunky profile of the Q5 is maintained.

The new pictures also reveal one of the next-gen Q5's interior door cards for the first time. There are clear similarities with the design of the Q7, suggesting the rest of the cabin could take influence too. 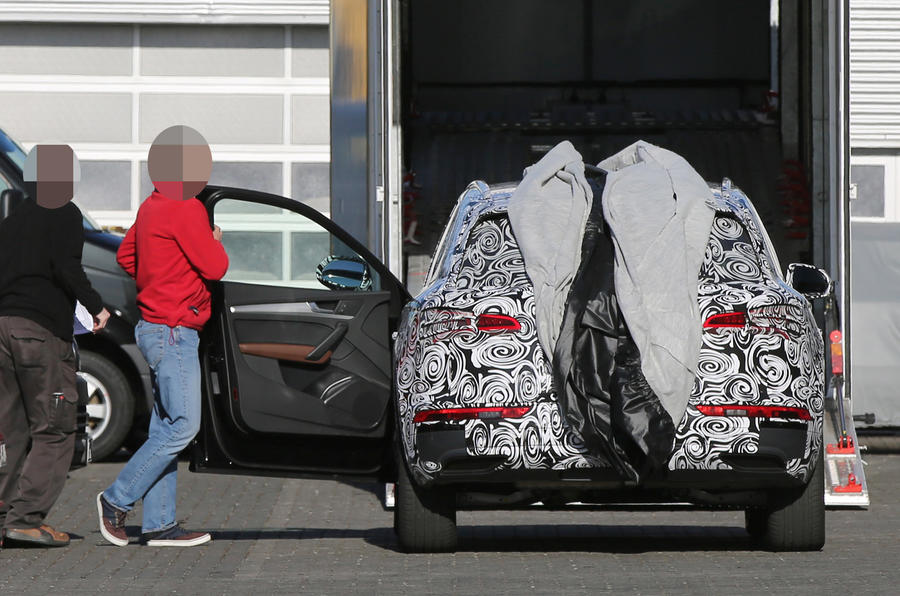 Earlier pictures of the car testing at the Nürburgring (below) show it in hot Audi SQ5 guise. This is confirmed by the fitment of larger wheels and the car's use of more aggressively styled bumpers.

When launched, the Q5 will have a contemporary new look and a high-quality interior featuring the latest in-car connectivity functions. The model line-up will include a frugal plug-in hybrid and, later on, a performance-orientated RS Q5.

Closely related to the latest A4, the new Q5 has been engineered from scratch in a move that officials suggest has resulted in it shedding more than 100kg compared with the first-generation model that has been on sale in the UK since 2008. Nothing is official, but Autocar understands that the lightest of the new line-up, a price-leading rear-wheel-drive entry-level model, tips the scales close to 1620kg.

Key to the weight loss is the adoption of the latest evolution of Audi’s MLB platform already used by the new Q7 and A4. It uses a greater percentage of hot-formed high-strength steel and cast aluminium elements than the initial MLB structure, providing the new Q5 with not only much lighter but also more rigid underpinnings than its seven-year-old predecessor. 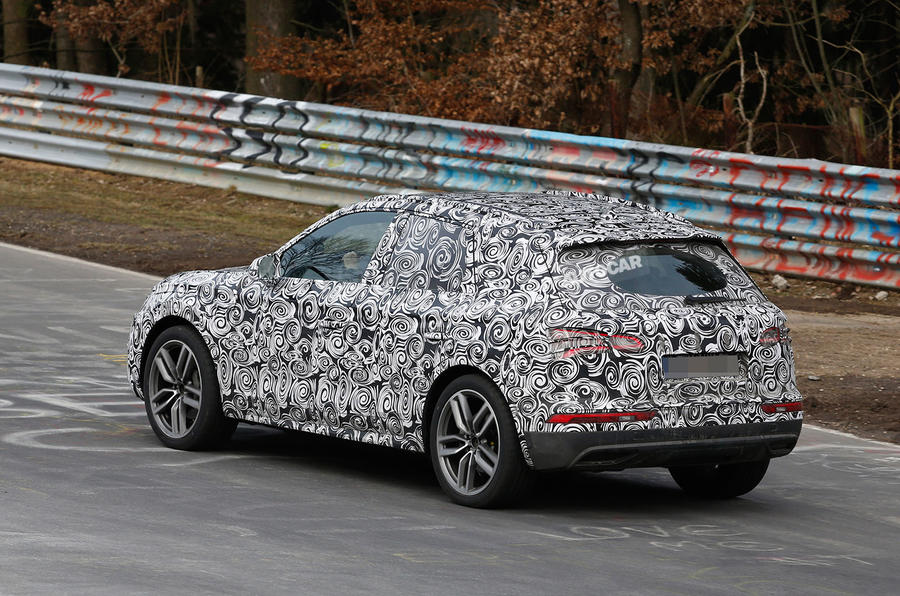 While the prototypes spied here are comprehensively disguised, the new SUV remains close to the existing model in size with a length of around 4700mm, a width of 1950mm and a height of 1650mm.

A moderate increase in the wheelbase, which currently stretches to 2810mm, promises to provide added levels of accommodation, most notably in the rear, where officials suggest the model benefits from additional leg and shoulder room. Boot capacity is also said to have increased beyond the nominal 540 litres of today’s Q5.

Audi design boss Marc Lichte has given the Q5 a more rugged look than that of the recently introduced Q7. Seen here, elements such as prominent wheel arch flares and large wheelhouses are evident underneath the camouflage of these latest test mules. Like the original model, it also appears to feature a clamshell-style one-piece tailgate with integrated tail-lights.

As with the new A4, buyers will get to choose between standard bi-Xenon headlights, with LED and LED-based Matrix units set to be made available as an option, according to highly placed Ingolstadt insiders.

Inside, there is a highly contemporary dashboard similar in look to that first unveiled on the third-generation Audi TT and continued with mild changes on the latest Q7 and, most recently, the new A4.

Buyers will get to choose between three different control systems: the standard and base MMI arrangements operate in combination with a 7.0in free-standing monitor and rotary dial, while the top-of-the-line MMI Plus system combines with a larger 8.3in monitor, rotary dial and touch pad. 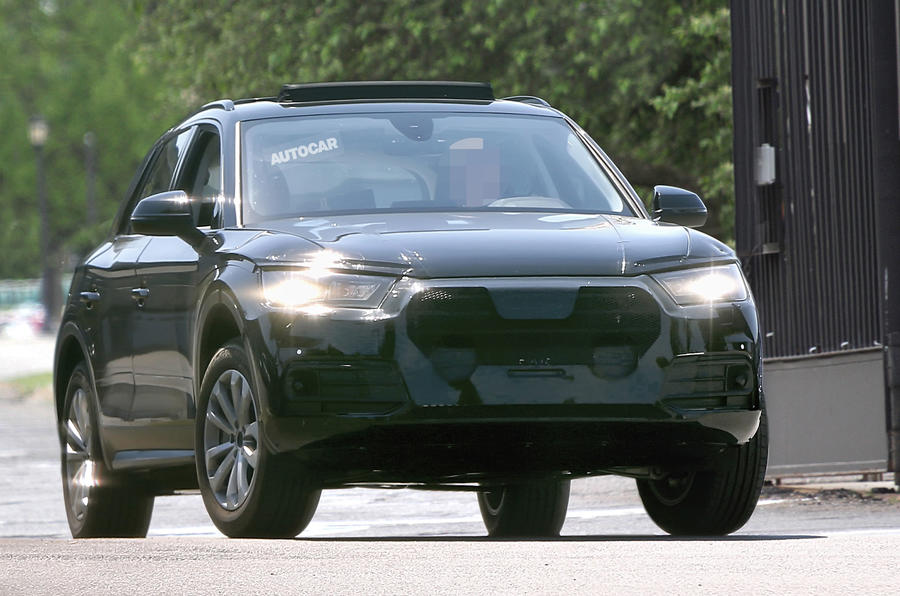 As with the A4, the Q5 will also feature up to two separate Nvidia Tegra 30 chipsets – one for the free-standing monitor and the other for an optional active instrument display, each capable of supporting the latest Google Earth 7.0-based navigation in combination with MMI Plus. Audi is also working closely with driver assistance system specialist Mobile Eye to provide the Q5 with the latest in 3D camera technology for a variety of driver aids.

The new Q5 will be sold with a range of four-cylinder and V6 petrol and diesel engines from the outset. In combination with efforts that are claimed to have reduced aerodynamic drag to less than 0.30 and brought about a significant lowering in mechanical drag, they are said to provide fuel economy savings of up to 15% compared with the first-generation model.

The four-cylinder petrol and diesel engines and standard V6 diesel units are set to be carried over from the latest A4 without significant changes, while the V6 petrol engines form part of a new generation of powerplants being developed in a joint engineering project between Audi and Porsche under the codename KoVoMo.

Also planned is a new plug-in hybrid driveline option. It uses a 2.0-litre four-cylinder petrol engine in combination with two electric motors, with one mounted within the gearbox and the other within the rear axle. Already highlighted on the Audi Allroad Shooting Brake concept revealed at the 2014 Detroit motor show, the new system is said to provide the new Q5 with an electric range of up to 31 miles.

Moves are also afoot to provide the Q5 with a wider range of performance engine options. The 3.0-litre V6 diesel engine used in the existing SQ5 is rumoured to receive a moderate increase in output, taking it from 306bhp to around 325bhp. Also planned is a twin-turbocharged 3.0-litre V6-powered range-topping RS Q5 model developing in the region of 500bhp. 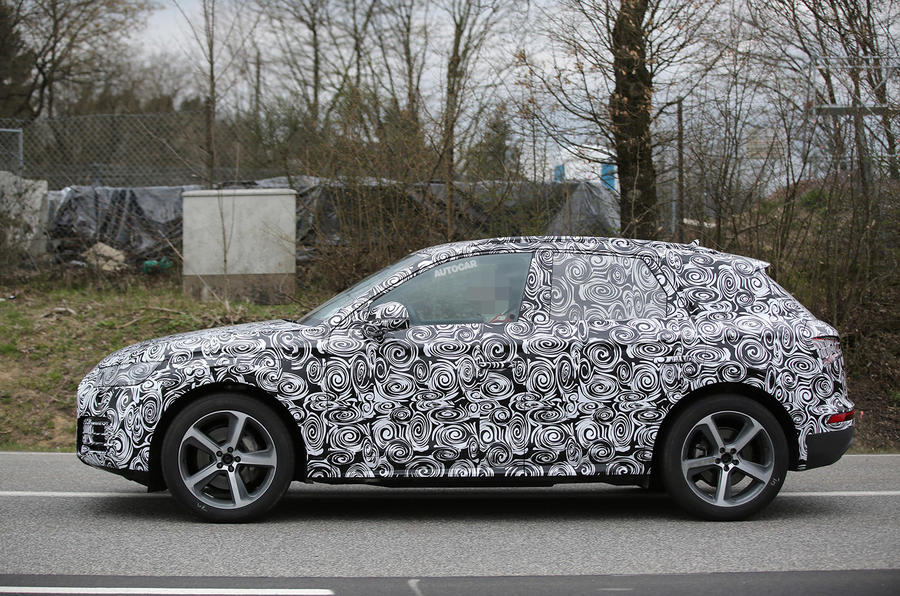 Alongside traditional quattro four-wheel drive, the new mid-sized Audi SUV will also offer rear-wheel drive in combination with the least powerful four-cylinder petrol and diesel engines. Gearbox choices will include either a six-speed manual gearbox, seven-speed S tronic dual-clutch automatic or eight-speed torque converter-equipped automatic depending on the engine that is chosen.

The new Q5 will be underpinned by a new five-link front and rear suspension system with steel springs and adjustable dampers, a set-up Audi engineers confirm is borrowed largely from the latest A4.

Unlike its more on-road-focused sibling, though, the new SUV is planned to be offered with an optional air suspension offering an automatic self-levelling feature as part of efforts to provide it with an improved ride and enhanced towing qualities.

To free up production capacity at its main Ingolstadt manufacturing facility in Germany, the second-generation Q5 is planned to be produced in a new Audi factory in San José Chiapa in Mexico. Further assembly will take place in Changchun, China and Aurangabad, India.

The model is set to go on sale toward the end of this year.

Read our extensive review of the Audi SQ5

Parked outside a school near you

Another tedious SUV to be seen badly driven on a school run near you. All of them will be ordered in unimaginative metallic black paint with black leather interiors. Audi drivers are the new BMW drivers i.e. those who think they can drive but sadly can't.
5wheels 5 April 2016