The next Citroën C3 will compete in the World Rally Championship; a Fiesta ST-rivalling spin-off is also due
Open gallery
Close

The 2017 Citroën C3 WRC, revealed in concept form here, will compete in next year’s FIA World Rally Championship and is expected to spawn a C3-based spin-off set to rival the Fiesta ST.

Citroën has now revealed its 2017 C3 WRC in final specification

Despite Citroen’s past success in rallying, it has never capitalised on its racing success in its road cars, but insiders say plans for a hot C3 will make sure this isn’t the case in the future.

The C3 WRC will herald Citroën’s return to the WRC after a year’s sabbatical, which has been used to focus all efforts on designing the team’s 2017 car. For the 2017 season, cars will comply with a new set of regulations that allow for more aggressive aerodynamics and more powerful engines.

Making its debut at the Paris motor show, the C3 WRC concept shows that next year’s model will add muscle to the curvy exterior of Citroën’s next-generation hatchback. The concept is 1875mm wide, which is 49mm more than a C4 Picasso MPV. Most of this growth has come thanks to enlarged wheel arches that cover the car’s widened tracks.

The car’s length has grown by 55mm compared with Citroen’s last WRC competitor, the 2015 Citroën DS3 WRC, making it 4150mm long. The increased length is thanks to less restrictive aero limits leading to a more prominent front bumper and larger front spoiler. 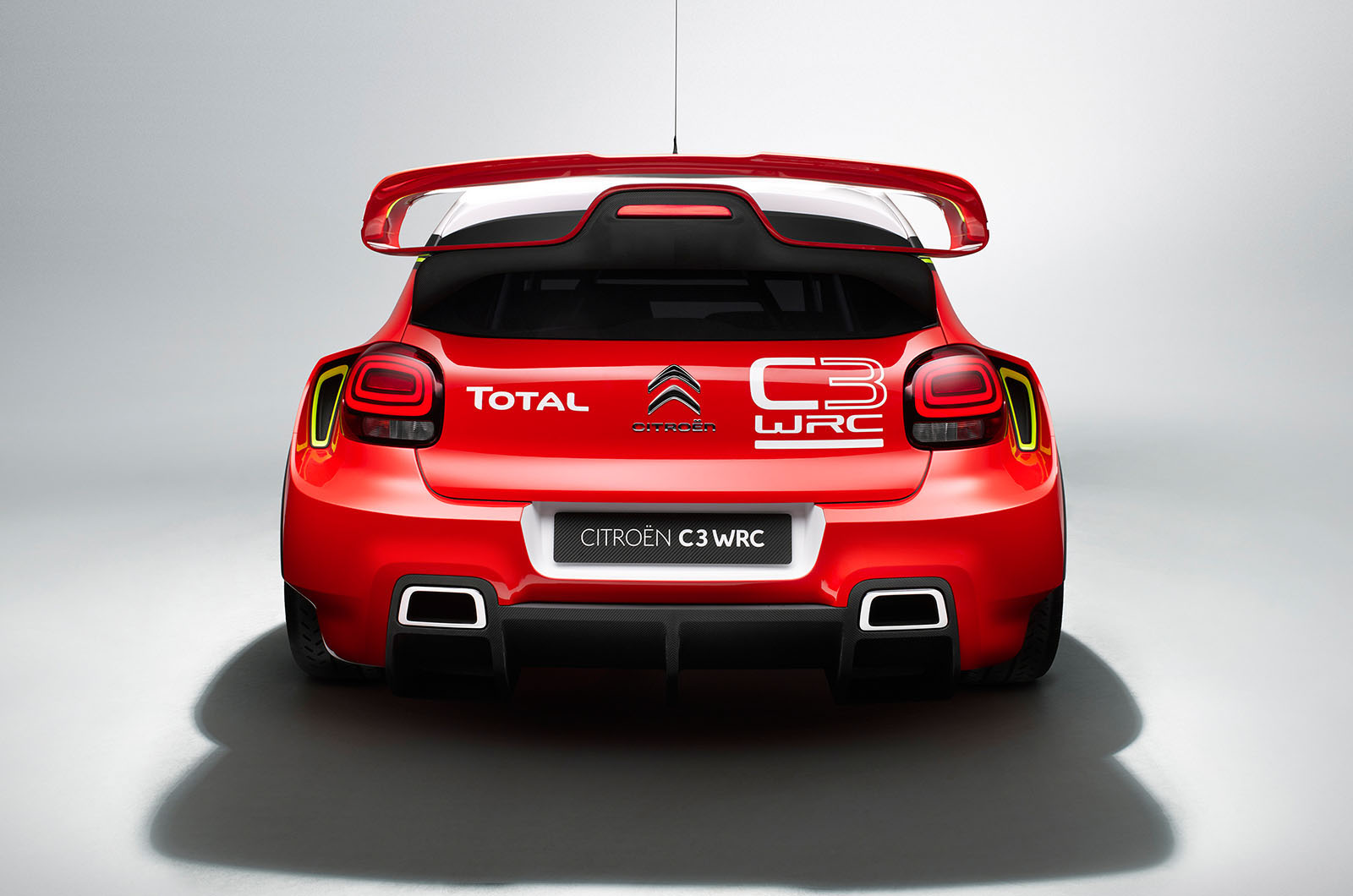 To match the additional front downforce, a bigger fixed rear wing has been added to the rear and placed as far back as possible for maximum effect.

Citroën says despite the car’s concept label, its exterior has been designed with the new 2017 WRC regulations in mind, meaning it could be used in next year’s season without modification. However, such is the pace of development in motorsport, it’s likely that small changes will be made during the closing months of 2016.

Under the bonnet is a turbocharged 1.6-litre four-cylinder engine that produces 380bhp, making the competition car almost four times as powerful as Citroën’s current most potent C3 road model and 80bhp more potent than the 2015 car. The 2017 car’s power increase comes largely thanks to a bigger 36mm restrictor, as per the championship’s new engine regulations. 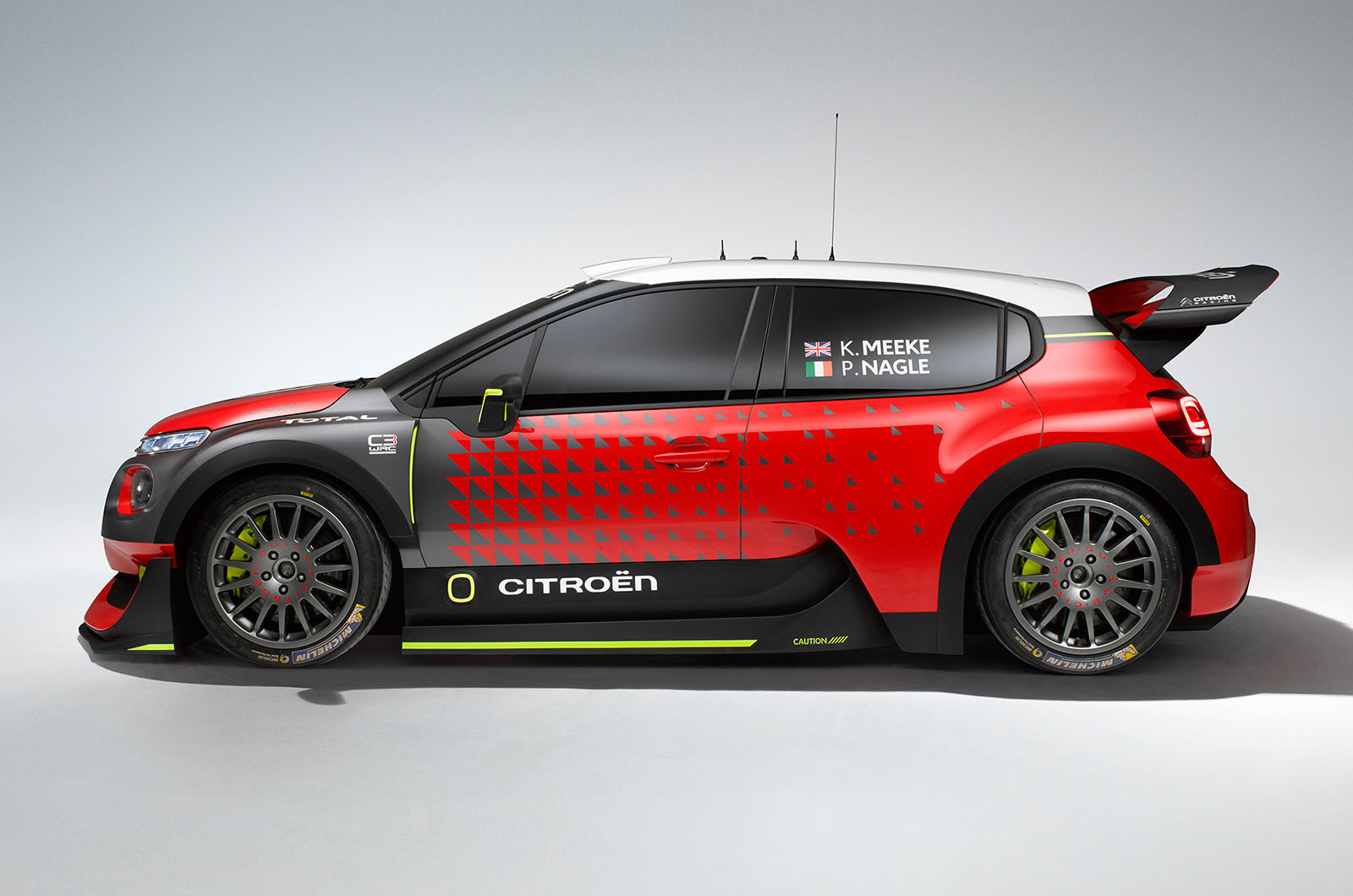 Despite its larger size, the new regulations mean the C3 WRC weighs 25kg less than Citroën’s 2015 challenger, which weighed 1200kg as per 2015 regulations.

The C3 WRC concept will influence the competition model that’s set to make its WRC debut at the Monte Carlo Rally in January 2017. It’ll go up against other factory-supported cars from Volkswagen, Hyundai, M-Sport and Toyota, which will also be fielding its first official WRC entry since it departed as champion in 1999.

Citroën returns to the WRC as the second most successful manufacturer after Lancia, with 94 wins and eight constructors titles under its belt. Most of the brand’s success came during a lengthy period of dominance that started in 2004 with star driver Sébastien Loeb.

Britain's Kris Meeke is helping with development of the C3 WRC and will be the team's lead driver for the 2017 season alongside co-driver Paul Nagle.

Looks more like a track car than a rally version, but I suppose the skirts will disappear for the gravel events. Hopefully under the new rules for next year we'll see a return to the old days with several manufacturers competing fairly evenly, which hasn't been the case since the wonderful Group B cars were banned. If only Formula One's rule changes could produce that effect also, and we'd have two epic championships to follow again.
5wheels 20 September 2016

Bye bye the fabulously talented Loeb and hello Kris Meek. Hard act to follow indeed but they are giving him an awesome piece of kit. The other French pretender will have his work cut out next season but i fancy a flutter on Toyota right out of the box.
As for luxury and rallying as mentioned above. Please get a life. Image sells no matter the reason. Watch Yaris sales take off in 2017
johnfaganwilliams 20 September 2016

in the magazine last week there was a substantial article covering the brand's move away from low-margin volume sales and into a new era of comfort and premium. So what's the WRC got to do with that?
I'm a huge motorsport fan but I can't see how the marketing department square charging though forests with comfort and innovation.
Mikey C 20 September 2016

I'm not sure Citroen got ANY

I'm not sure Citroen got ANY benefit form all those WRC wins, as they don't sell sporty road cars!
From a marketing point of view it's all a bit a of a waste of money, who rushed out and bought a C4 because of the motorsport success?
View all comments (5)