BACK TO ALL NEWS
Currently reading: Citroen C3 WRC revealed ahead of 2017 World Rally Championship
UP NEXT
Volkswagen ID Buzz to kick-start wave of enthusiast-oriented EVs

The 2017 Citroën C3 WRC has been unveiled less than a month before the World Rally Championship kicks off in Monte Carlo in January.

The new challenger conforms to next season’s less-restrictive regulations, which allow for the use of a larger 36mm restrictor – up from 33mm – and more aggressive aerodynamics.

It’s based on the all-new five-door-only C3, but the competition car's back doors have been welded up and it sits on a wider track that's hidden beneath swelled wheel arches. The car measures 1875mm wide, which is 55mm wider than Citroën’s last WRC machine, the DS3 WRC.

The C3 WRC is powered by a 1.6-litre four-cylinder turbocharged engine with 2.5bar of boost to produce 380bhp, which is 20% more than the DS3 WRC, and 295lb ft. The unit uses a machined block and is closely related to the engine found in Citroën’s C-Elysée WTCC racer. 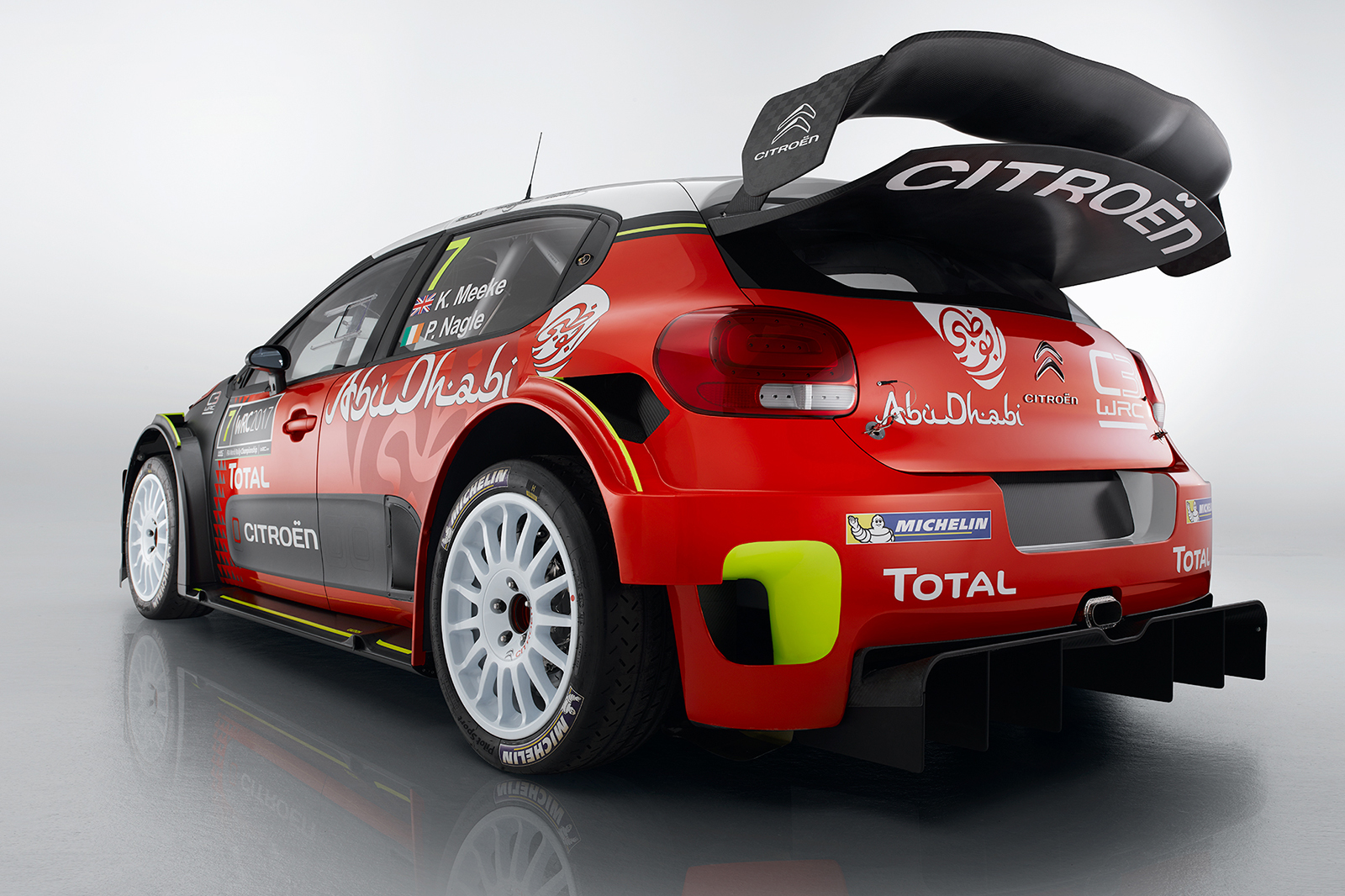 "I think it is safe to say that the Citroën C3 WRC has the most accomplished engine we have ever built,” said engine manager Patrice Davesne. “We have boldly opted for some radical technological solutions, which I obviously won't detail here. But we're proud of the work we have done, especially on reducing friction."

The car’s chassis uses spring-shock absorbers that are now placed at an angle in order to increase their travel. The geometry of the set-up will change depending on whether the car is set up for gravel or asphalt.

New 2017 regulations allow for the use of a centrally controlled hydraulic differential, enabling drivers to adjust the torque split between the front and rear axles while running.

“As is often the case in motorsport, we worked to a very tight schedule during the design and development of the car,” said Laurent Fregosi, Citroën’s WRC technical director. “When we began testing, there were no major issues and the drivers said they were delighted with the car's handling. Now that it's time to measure ourselves against the competition, we feel that we have worked very well but it's impossible to be confident.” 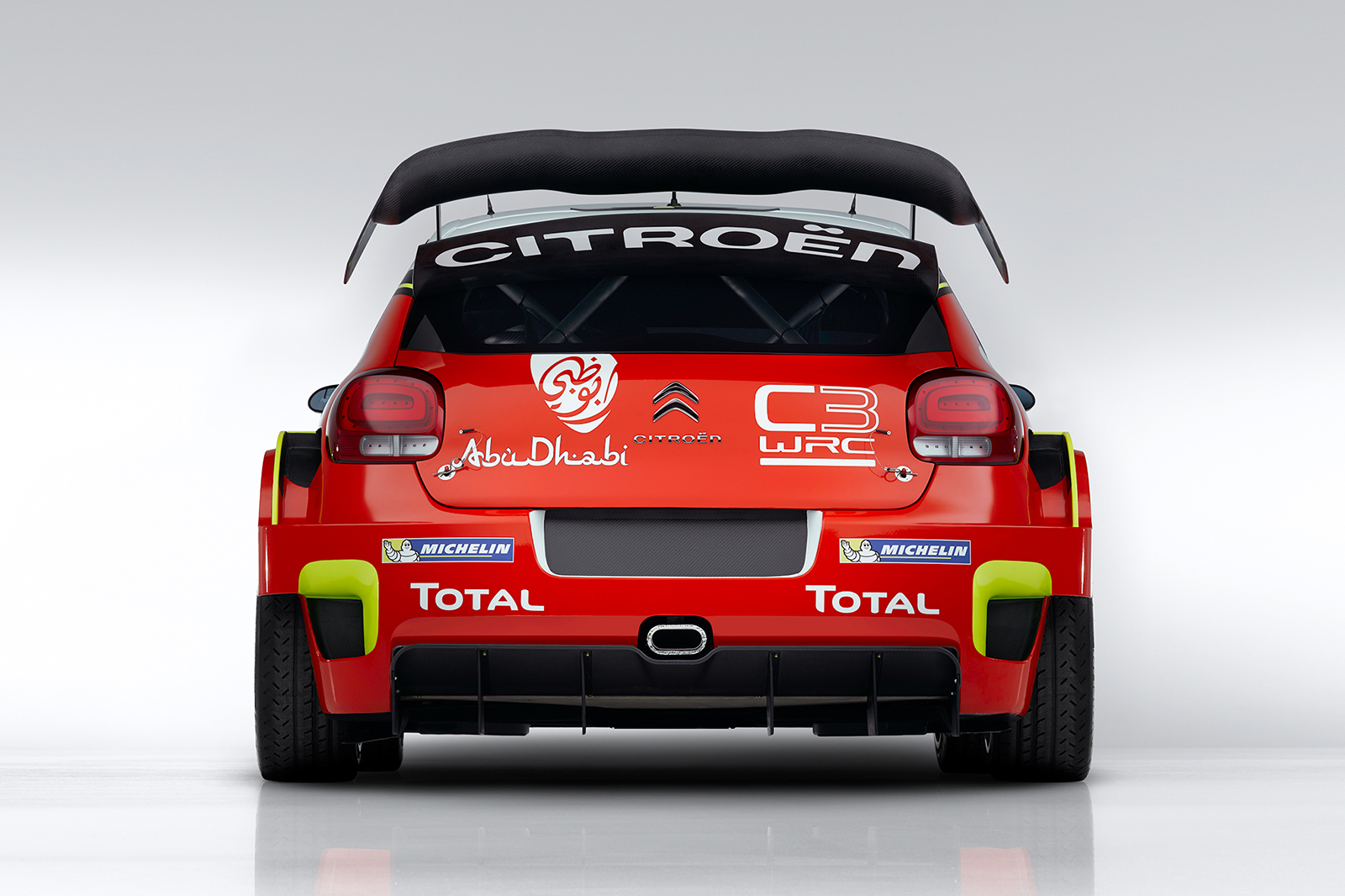 The Citroën C3 WRC has already completed 10 test sessions, covering a total of 5900 miles. The car was homologated by the FIA on 13 December, five weeks ahead of the opening 2017 rally in Monte Carlo.

The team’s drivers will include Kris Meeke, who has taken a leading role in the car’s development and has three WRC event wins to his name. His team-mates will be 26-year-old Craig Breen and 24-year-old Stéphane Lefebvre.

Citroën will go up against the likes of M-Sport, which is fielding Ford Fiesta WRCs and has reigning world champion Sébastien Ogier among its line-up, and Hyundai, which recently revealed its i20 Coupé WRC.

Reigning constructors champion Volkswagen has departed the WRC following heavy cost cutting related to Dieselgate, but its Polo R 2017 could still compete through a privateer entry.

This Citroen (french) seems to be more of an integrated design compared to the renderings from the other manufacturers.
Could it be that they are somehow getting advance notifications as to what the FIA (French) are looking for with regards to the regulations, etc?
Let's hope Ford and Toyota and Hyundai, do a better job with regards to the performance so we would see a very competitive season....