Esteban Ocon took both his and Alpine’s maiden Formula 1 victories in a chaotic Hungarian Grand Prix, ahead of Mercedes-AMG’s Sir Lewis Hamilton and Ferrari's Carlos Sainz.

The result gives Hamilton an eight-point lead in the drivers’ championship and Mercedes a 12-point gap in the constructors’.

Sebastian Vettel finished second for Aston Martin but was subsequently disqualified, because stewards were unable to collect the 1.0-litre of fuel that's required for parc fermé testing, despite Vettel stopping on track right after the chequered flag. The team is appealing the decision.

In extraordinary scenes, where it rained half an hour before the start, Valtteri Bottas misjudged his braking for Turn 1 and skidded into the back of McLaren’s Lando Norris. It was the start of a trigger-move that eliminated Norris, Bottas and Sergio Pérez, plus caused significant damage to Max Verstappen.

In a further knock-on, Aston Martin’s Lance Stroll also came into the T1 braking zone too hot, taking out himself, Charles Leclerc and Daniel Ricciardo, although the latter recovered to finish 12th.

Unsurprisingly, the race was red-flagged, but the bizarre afternoon wasn’t done yet, as Hamilton was the only driver to line up on the grid. Every other car dived into the pits following the formation lap to pit for slicks - a move that Hamilton quickly realised was the correct one, as he too came in at the end of lap one, dropping him to the back of the pack. 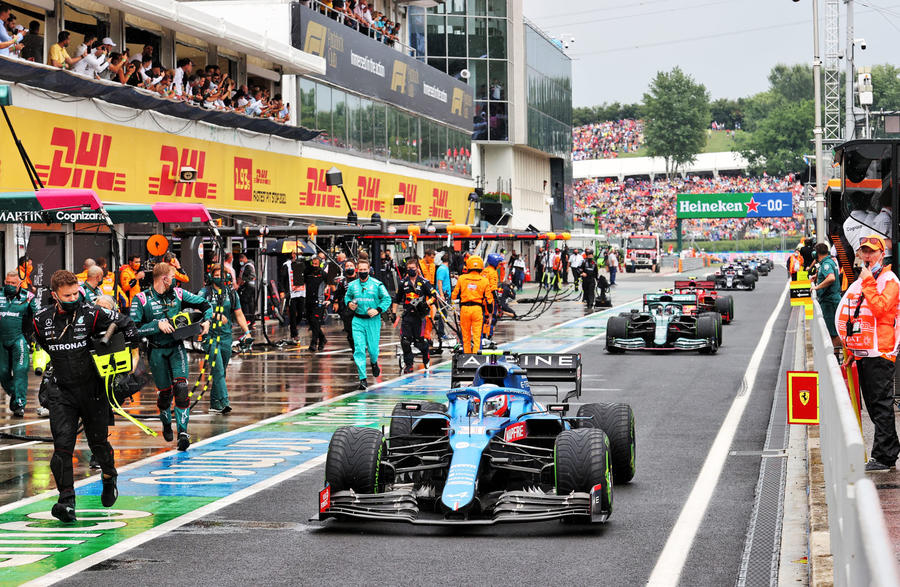 That left Ocon in the lead, and he then defended the position for the next 70 laps. Vettel gave it his best shot, including coming very close to a pass as the pair lapped the Alfa Romeo of Kimi Räikkönen, but Ocon held on to win by 1.8sec.

Hamilton charged back through the field, pitting twice and setting numerous fastest laps, but couldn't close the gap and came in third.

Fernando Alonso was fourth ahead of Pierre Gasly (who grabbed a point for fastest lap), Yuki Tsunoda and the Williams pair of Nicholas Latifi and George Russell. Verstappen was ninth, with 10th going to Räikkönen.

A race to deliver

After all the acrimony following the Verstappen-Hamilton crash at Silverstone, including statements and counter-statements from both Red Bull and Mercedes, it was a relief that the Hungaroring delivered such lights-to-flag race action.

Ocon was a deserving winner, resisting the race long pressure from Vettel and delivering his first victory. The Frenchman has long been tipped as a future star but has sometimes struggled to live up to the billing in previous seasons. With Alonso as his team-mate this year, though, Ocon has put in a series of points finishes and been rewarded with an extended contract into 2024.

Ocon gets the headlines, but he owes a debt to his team-mate Alonso. The Spaniard held up Hamilton for 10 laps, giving Ocon enough breathing space at the front. Given that Hamilton eventually got to within 2.7sec of Ocon at the chequered flag, after having eventually passed Alonso and Sainz, it’s clear how much Alonso did for Ocon’s win.

It was vintage Alonso, doing just enough in a slower car to keep Hamilton behind. There’s life in the 40-year-old double champion yet. 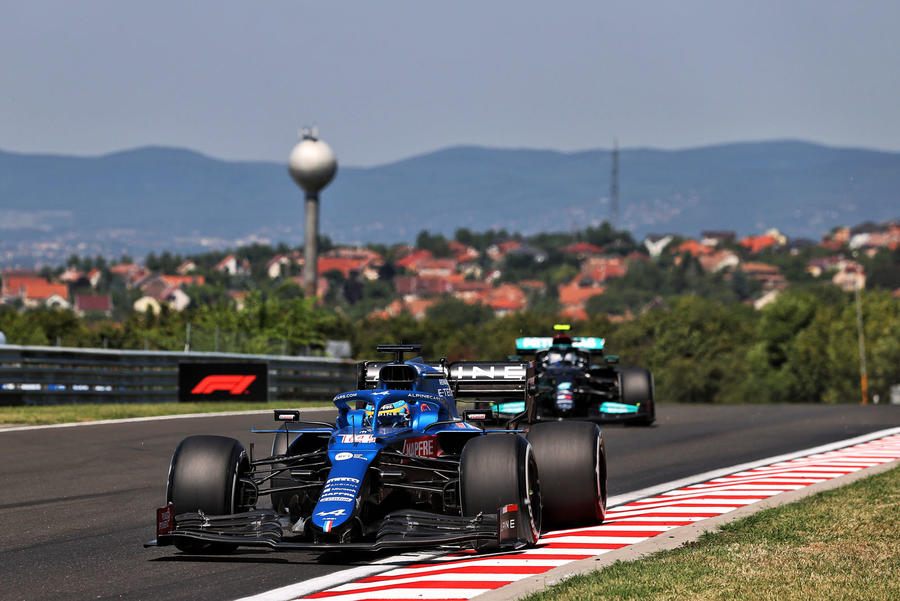 In emotional post-race scenes, it was clear what his two points meant to Russell. The Briton’s pointless streak with this team stretches back 47 races before today to his debut with the outfit. His only prior F1 points came when he replaced a Covid-19-sidelined Hamilton at last year’s Sakhir GP.

Opinion: Will the F1 season take a dark turn?

Hands up, who'd like to see Alonso in team Hamilton, sorry, Mercedes!

Congratulations to Ocon, but a lucky win. An absolute howler from Bottas, took three key runners out.

Great racing between Alonso and Hamilton. Right on the edge of fairness, and edge of the seat stuff. Both drivers giving just enough space (note to Verstappen).

Bizzare restart with Hamilton by himself on the grid. While entertaining I'd prefer not to see that again, and drivers having to take the start with the tyres they have if on intermediates or wets. If on slicks and it rains then they should get the choice to come in before the start as slicks on a wet track is not funny (as anyone who has raced will tell you).

I assume Aston Martin appeal will end positive, since Vettel is a nice guy and, moreover, a smaller gap between Hamilton and Verstappen is good for F1. Horner doesn't have to turn on his horn for that purpose.