BACK TO ALL NEWS
Currently reading: F1 prodigy George Russell on why he's happy to wait
UP NEXT
New 2023 Ford Mustang breaks cover in production bodywork

F1 prodigy George Russell on why he's happy to wait

After coming so close to scoring his first points in a Williams at the recent Styrian Grand Prix, George Russell remains relaxed about the future
Open gallery
Close

George Russell has nothing to worry about. He already has a Mercedes contract in his pocket for 2022. It’s just a matter of when Mercedes decides what it needs to decide.

Will George stay with Williams for another season, or will he step up to be Lewis Hamilton’s team-mate in the world championship-winning team? He’s managed by Mercedes, which means that he doesn’t need to convince them…

“I think that is a fair assessment,” George says. “I’ve been part of Mercedes since 2016 and I have probably done over 100 days on the simulator for them in the course of the years before I joined Williams. And I am in constant communication with them after every single race, so it is a bit of a strange position, because they ultimately choose where I can race. The buck stops with them - but obviously it is in my hands to do a good job to show what I can do.” 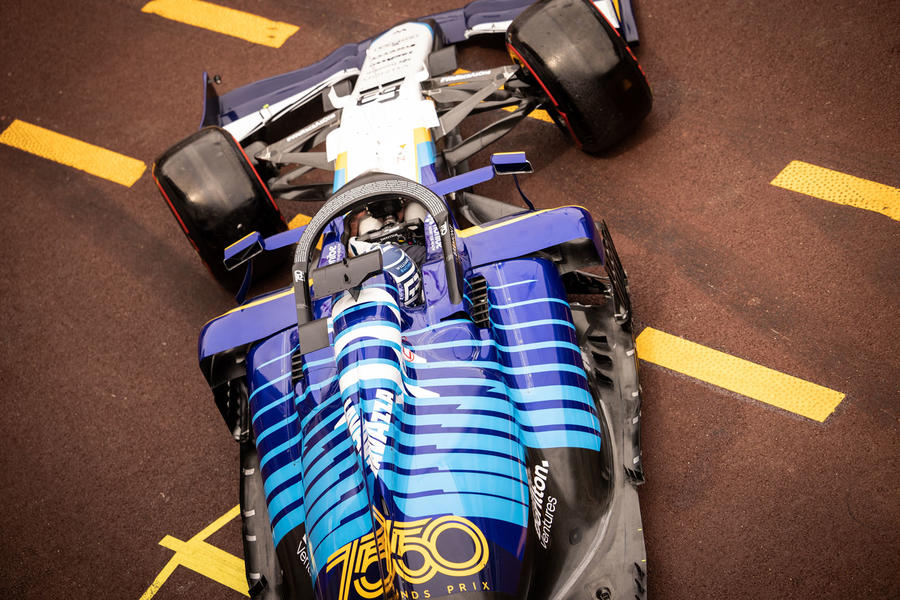 No one is saying anything officially, for the moment. Valtteri Bottas is still chasing big results to try to secure the seat for another season, but it makes less and less sense with each year. At some point, Lewis Hamilton is going to retire – and Mercedes doesn’t want to be caught out. And remember, it’s happened before. Back in 2016, Nico Rosberg won the world championship, beating Hamilton, and he knew that he’d probably never do it again – and he retired. Mercedes was left scrambling for a driver. Bottas was the man, but it took a while for him to get comfortable in the team. If Hamilton goes, Mercedes wants a team leader ready to go.

Bottas is a very competitive individual and his only 'crime' is to be partnered by Hamilton, the greatest Formula 1 driver of all time, at least statistically. Russell doesn’t seem too worried about going up against Lewis.

“Everyone wants to go up against the best driver,” George says. “Everyone believes in themselves, but for me, I’d love that challenge because the pressure would be off and I’d find myself in a win-win scenario. I’d go in with that mentality if I ever found myself up against one of the best drivers of all time. You have got nothing to lose - which I think is great really. That is the sort of situation that Sergio Perez finds himself in at the moment. He’s got no pressure because he’s got nothing to lose - and so you go out there and enjoy it, and show them what you can do.” 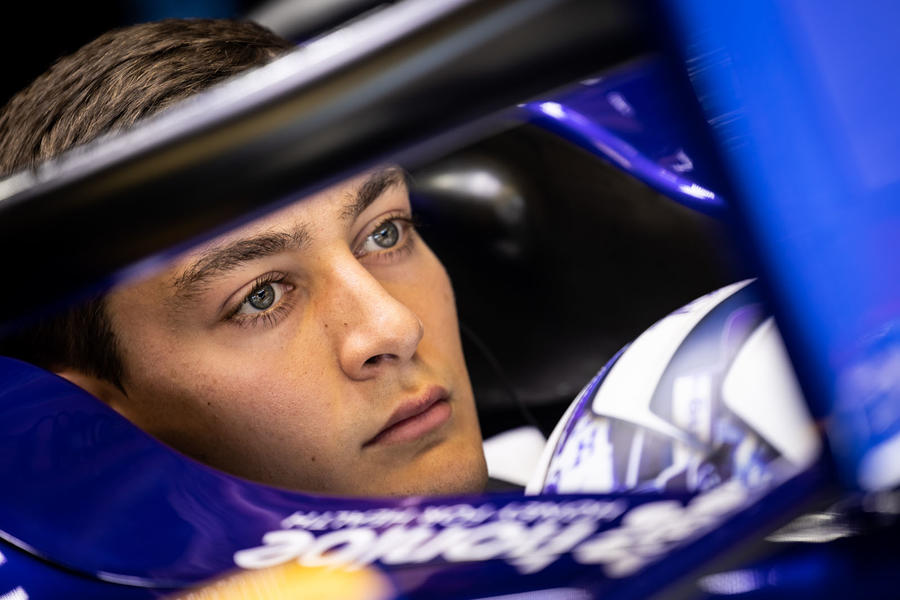 “Definitely,” he says, without hesitation. “I believe in myself and I feel ready to fight for victories and world championships. I had the massive challenge in Bahrain last year, being thrown in at the deep end with no preparation and no laps in the car. I think it has been proven how difficult it is to jump between cars and get up to speed. I felt far from up to speed for that race but we still managed to do a pretty decent job so I think I feel ready. Obviously.”

It’s a fascinating insight into Russell’s way of thinking. He did an extraordinary job in Bahrain, when he stood at short notice in for a Covid-infected Hamilton, and seemed to be on course for victory when the team messed up. But Russell has made his mark.

“The weekend went well,” he says, “but I don’t think I performed to my maximum. That is normal if you try something new. You are not going to get to grips with it on your very first occasion and that was the position I found myself in.”

Some argue that Hamilton has always been flattered by the cars and that Russell’s performance in Bahrain showed that.

“The best drivers often find themselves in the best car,” he says. “There is no doubt that Lewis has probably had the best car over the last few years, but in tricky circumstances, he’s the one who doesn’t drop the ball. He’s the one who can sometimes pull something out of the bag. So it goes hand in hand. If you’re a good driver, you can often pull more from the car, but if the car is good, that enhances the driver as well. The package between them has been pretty formidable.”

As confident as he is, does Russell feel he still has areas where he is weak?

“I wouldn’t say weak but there are definitely areas where I need to improve,” he says, with his usual candour. “Cars are constantly adapting and tyres are changing. It is a tricky sport but I guess that is what makes it so great. I think you have to learn to be adaptable. Definitely one thing I need to improve is my first laps. That is really odd because in my whole career - since I was eight years old - race craft and first laps were probably my strongest points. I was never the greatest qualifier in my junior career and in karting, but I could always move forward. That was one of my selling points to Toto [Wolff]. Statistically, I moved forward from where I started. Since I got into F1, it hasn’t been the case.

"It’s very different racing at the back compared to racing at the front, because you always have this concertina effect. When you are in the front two rows, it is fast and flowing, and when there is a gap, there is often no one ahead for the gap you are going for. When you start at the back of the grid, there’s a very different dynamic and I haven’t really got to grips with it. I’ve tried to improve but it is very difficult.” 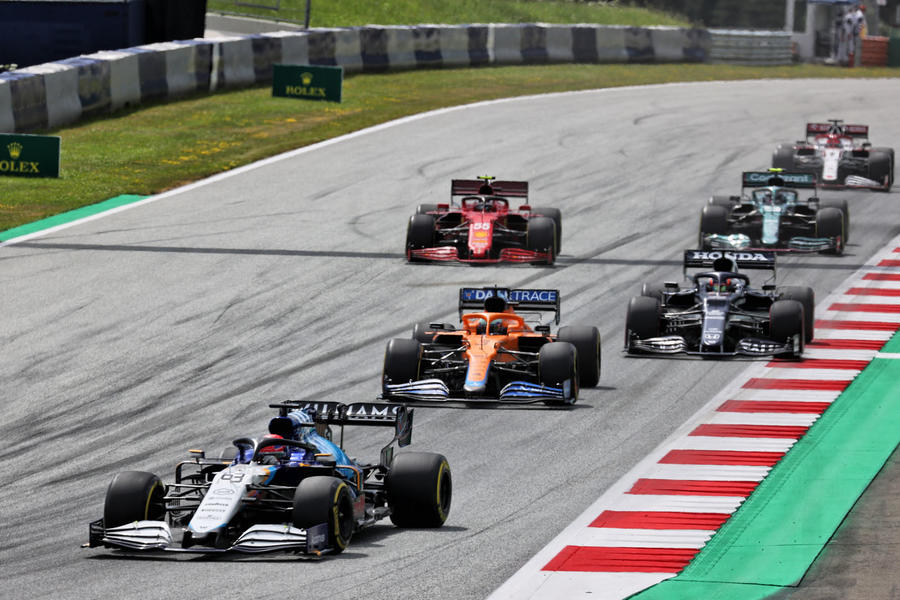 So has he got the maximum out of the Williams this year? “I wouldn’t say so,” he admits. “No. In Imola, I should have scored points - regardless of how things panned out. We should have come away with points. So no is the answer.”

You can say that he’s been unlucky, but Russell doesn’t hold much store in luck.

“I am not one to believe in luck,” he says. “To be honest, you make your own luck. If I find myself in a world-championship-winning car next year, I am not going to turn around and say: ‘That’s lucky!’ But if I don’t get it, I am not going to turn around and say it was unlucky. You are where you are because of what you achieve and what you accomplish, whether it is on track or off track. That’s my mentality and I’m not relying on luck for anything. I’m not hoping that everyone crashes and I win the race. I’m relying on me doing the best job possible with the team - and if we come home 12th, that’s the maximum. We cannot rely on others to break down. We need to do a better job.”

The trials of an F1 rookie: Yuki Tsunoda on his early season struggles

F1 is a cruel sport with a history of great drivers missing the magic window of opportunity, acerbated this century by the long tenure of dominant team/driver combos (Ferrari & MS; Red Bull & SB; Mercedes & LH). I like Russell, and think he's a talent for sure, but he's 23 already, and tall by F1 standards at 6'1". I wish him every success but, without a top drive in '22, the clock would be ticking very loudly...

Why does David Coulthard keep banging on at every opportunity about Russell replacing Bottas - is he on a percentage?

But, what if, in 2222, the Mercedes isn't the top team?, Redbull seem to have got Mercedes number at the moment, whether that continues?, we will see, Russell is a talent,and Mercedes, as he admits, tell him how high to jump, he's in a holding team till they decide what to do with Bottas,or indeed Hamilton in case if Redbull continue to beat Hamilton, Hamilton is in contract talks just now,so he might jump ship, to whom?,I don't know, heck, he might even retire,anyway, going to be fun watching.