BACK TO ALL NEWS
Currently reading: BTCC 2017: Sutton avoids Silverstone chaos to retain title lead
UP NEXT
Ford Puma ST hybrid prototype spotted at the Nurburgring

Adrian Flux Subaru Racing’s Ashley Sutton retained his championship lead despite not having finished higher than fourth all day. He heads into the final weekend of the year just 10 points clear of closest rival Team BMW’s Colin Turkington.

The three races featured plenty of incidents, with two drivers hospitalised after a big crash in race one.

Here’s how the day’s action unfolded. Speedworks Motorsport driver Ingram leapfrogged polesitter Goff of Eurotech Racing off the line and into Copse to take the lead.

Goff kept the nose of his Honda Civic Type R close to the back end of Ingram’s Toyota Avensis for the opening few laps, but dropped off when rain started to fall at the far end of the track.

The slippery surface caused a major accident featuring WSR BMW drivers Andrew Jordan and Rob Collard, as well as the Volkswagen CC of Will Burns. In a train of cars running in close contention on the run into Maggots, Aron Taylor-Smith clipped Collard, sending him into a slide. Collard slid onto the grass where he skated along and back into the train of cars at the exit of Becketts, smashing into Burns and Jordan at high speed.

Collard exited his car but was clearly in pain, while Burns, although seemingly okay when first getting to his feet, was later found to have bruised or broken ribs. The crash caused the race, now two-thirds of the way in, to be neutralised while marshals worked to clear the cars and debris.

The race was due to restart at the end of lap 19 but, as soon as the safety car pulled into the pits, the race was flagged and ended early with Goff collecting second and Adam Morgan of Ciceley Racing in third. 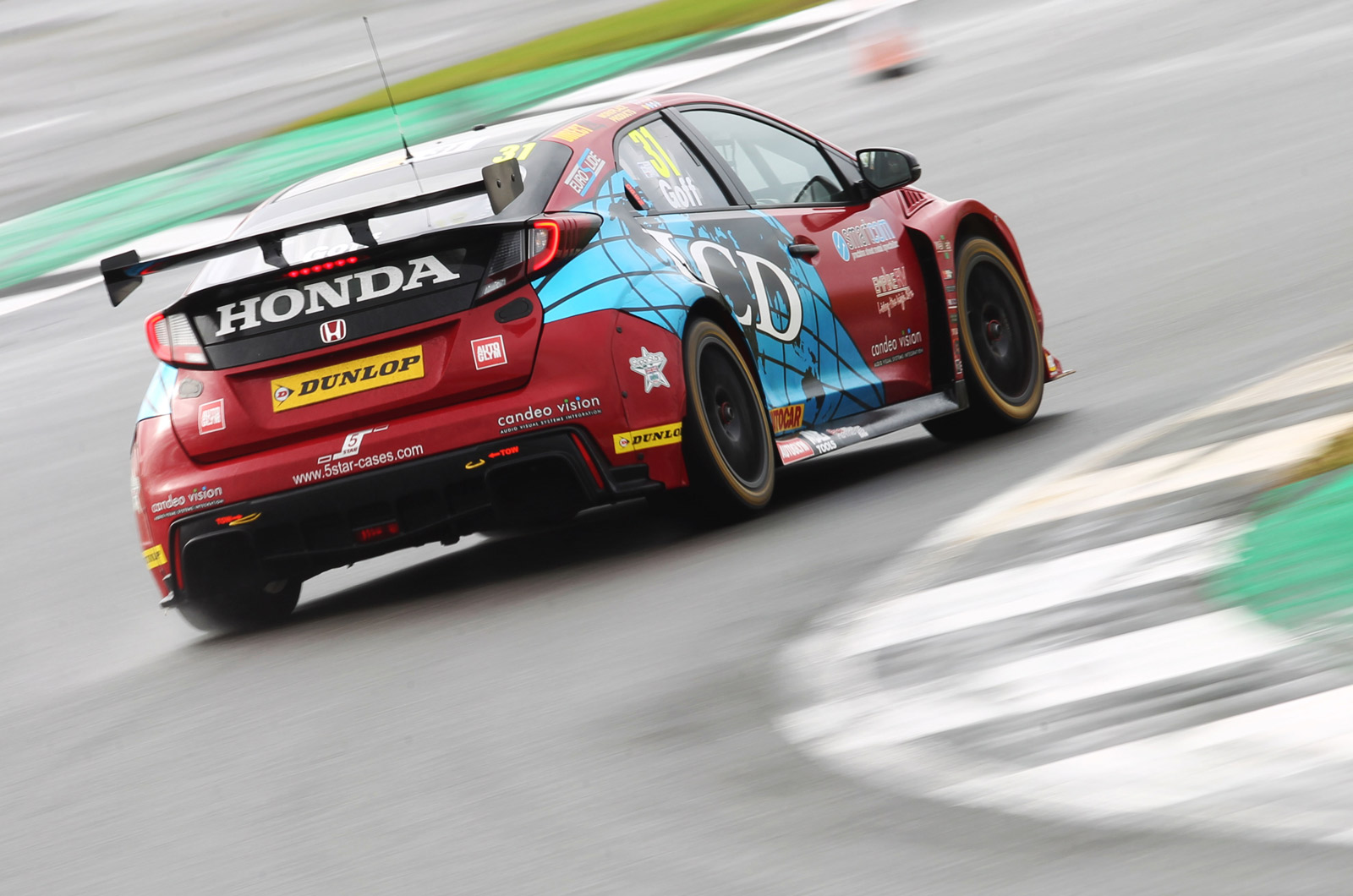 Ingram led Goff away from the line but the latter looked to be the faster driver in the race’s opening stages, with Ingram now carrying 75kg of success ballast. Goff decided to make his move for the lead on lap three when Ingram left the door open on the exit of Copse. They banged doors into Becketts as Ingram tried to defend the place, but Goff took the place and charged off into the distance.

Ingram, having lost touch with the new leader, was caught by Turkington and Sutton. He managed to hold off the pairing, costing Turkington third in the process as Sutton stole the place with contact on the last lap as the cars ran nose to tail. Turkington was later awarded the place, however, as the stewards deemed Sutton's move to have been advantage by contact.

Fifth place went to Rob Austin in his Handy Motorsport Toyota Avensis, having charged through the field in the race’s latter stages, beating Morgan and the Team Dynamics Honda of Gordon Shedden. 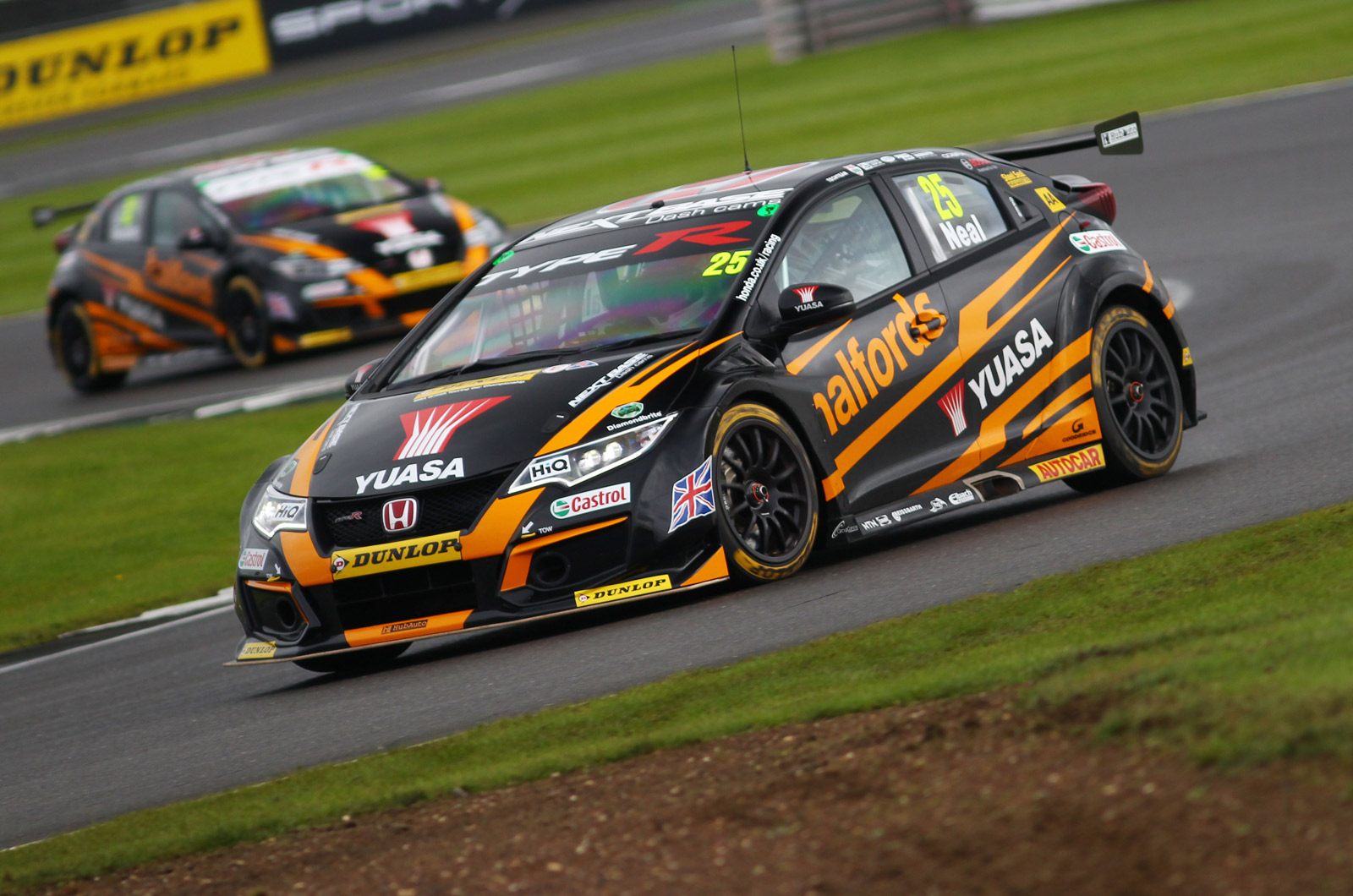 Power Maxed Racing’s Rob Huff, a returnee to the BTCC after 13 years, beat polesitter Dave Newsham’s Chevrolet Cruze off the line to lead the field into Copse. Huff, the Vauxhall Astra driver who was filling in for Max Chilton as he recovered from an operation, edged away from the leading pack early on.

But his gap was lost to a safety car period, caused by a midfield incident that included championship frontrunner Turkington. WSR’s Turkington was hit and sent back to 21st. He was then involved in another clash on the next lap, when Josh Cook and Jason Plato made contact at the final corner, causing a bottleneck that saw him hit Stephen Jelley’s Ford Focus, damaging his BMW 125i M Sport and leaving him to trundle around at the back of the pack.

Huff kept his lead at the restart, with Newsham quickly overtaken by Ingram for second before catching Huff ahead. On lap 14, Huff forced Ingram onto the grass as he attempted to pass on the exit from Copse. They arrived at Becketts side by side, but Huff had the line and forced Ingram to take the grass, before he slid across the apex and back onto the track.

Morgan and Neal took advantage, before Neal stole second with his headlights ablaze. With Huff in his sights, Honda’s Neal caught the leader and on lap 21 passed him into Maggots. Huff let the place go, before losing touch with Neal and being caught by the chasing Newsham, who had taken third from Morgan in the laps earlier.

Ingram salvaged a fourth ahead of Austin, with Morgan coming sixth and Chris Smiley of BTC Racing seventh in his Chevrolet Cruze.

Championship leader Sutton came from his last place grid slot – a penalty for the earlier clash in race two – and fought his way up to a respectable 11th, keeping his championship hopes alive.

He now heads to the season’s closing weekend at Brands Hatch on 1 October with a 10-point lead in the drivers' standings.

Also Taylor-Smith was pushed in Collard by Chris Smiley.

Thanks for the heads up. I'd like to blame our gallery function, but really it was due to tired eyes...