BACK TO ALL NEWS
Currently reading: New DS 3 Crossback revealed with petrol, diesel and electric power
UP NEXT
Fisker goes radical with Pear EV SUV

DS Automobiles has revealed its second model since becoming a stand-alone premium car maker pitched directly at the likes of Audi and Volvo: the Audi Q2-rivalling DS 3 Crossback. The new model made its public debut at the Paris motor show.

Following the DS 7 Crossback as the second of six planned DS Automobiles models by 2023, the small SUV enters one of the most competitive and fastest-growing segments in Europe. The 3 Crossback is the first model based on the PSA Group’s new common modular platform (CMP) architecture, which will underpin every small car from DS, Peugeot, Citroën, Opel and Vauxhall in the immediate future, including the next Peugeot 208 and Vauxhall Corsa.

The French-built 3 Crossback, which will reach the UK in the second quarter of next year, is also an indirect replacement for the DS 3 three-door supermini. That model will stay in production until the end of 2019 before being phased out. The 3 Crossback, codenamed D34, will be offered with petrol and diesel engines and, soon after launch, as a fully electric vehicle. 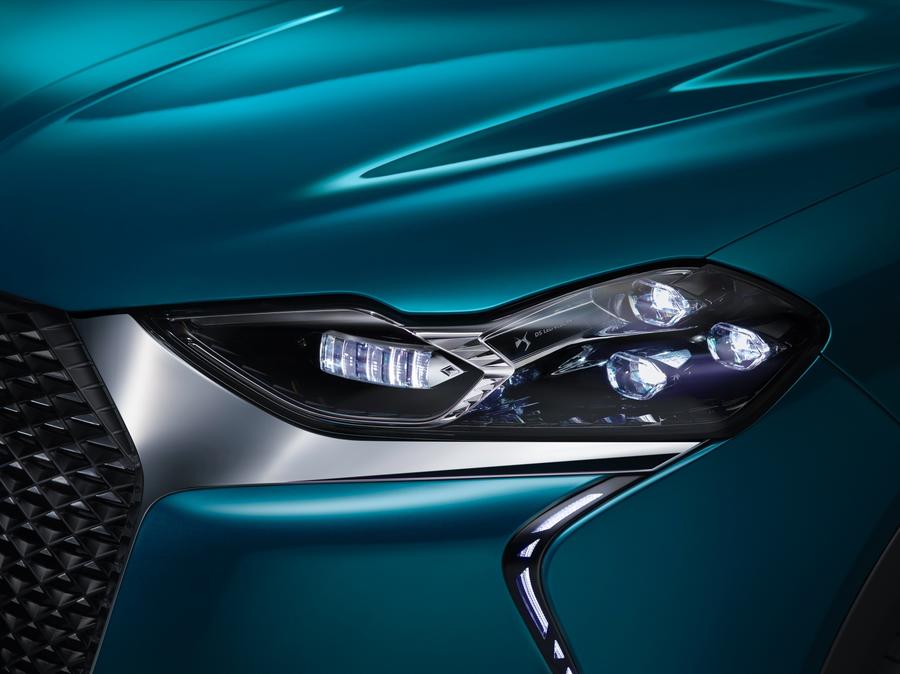 The plan of DS, and indeed the whole of PSA, is to offer electrified versions of each of its cars, rather than having bespoke electric models. Engines include 99bhp, 128bhp and new 153bhp variants of the three-cylinder 1.2-litre Puretech petrol unit, with an eight-speed automatic gearbox offered. A 99bhp 1.5-litre four-cylinder diesel will also feature.

The EV uses a 50kWh lithium ion battery to power a 134bhp electric motor (0-62mph in 8.7sec, with a top speed of 93mph) to provide a range of more than 186 miles on the WLTP test cycle (an exact figure has yet to be confirmed). On the now-outdated NEDC cycle, the range was 280 miles. An 80% recharge of the battery pack is possible within half an hour through a 100kW rapid charger. The batteries are stored in the space normally given over to the fuel tank, under the seats and within the centre tunnel to ensure interior space is identical to that of the conventionally powered versions.

The car’s styling was inspired by the 7 Crossback, while the shark-fin side pillars are a nod to the 3 hatchback. DS design chief Thierry Métroz says the 4118mm-long, 1791mm-wide and 1534mm-tall 3 Crossback’s design has been optimised around the new CMP architecture. DS designers were involved in its gestation to give the car the best possible chance of design leadership in such a style-led segment. To that end, DS is hopeful of challenging at the top of the sector in terms of sales.

I wonder if Car makers read posts in Car Mags to get an idea of how their product is received?, I guess not in some cases......

I wonder if Car makers read posts in Car Mags to get an idea of how their product is received?, I guess not in some cases......

That market is marginal. A couple of thousand units ... per year.

It's the EU market. DS4 and DS5 were phased out.

That market is marginal. A couple of thousand units ... per year.

It's the EU market. DS4 and DS5 were phased out.

DS market share is now so low that 40% of next to nothing is not much more in terms of cars.

And this new 5 door DS won't improve matters as it just looks like the DS3 with 2 doors added.