BACK TO ALL NEWS
Currently reading: 2018 BMW X2 previewed with Paris motor show concept
UP NEXT
New 2023 Audi A4 Avant undergoes tests in the Alps

The BMW Concept X2 has been revealed at the Paris motor show, previewing the bold exterior appearance to be adopted by a production version of the new SUV that is planned to go on sale during the second quarter of 2018 at a starting price of around £30,000.

First alluded to by the German car maker in a teaser photograph issued to the media this week, the X2 is a sister model to the recently introduced second-generation X1, alongside which it will be built at BMW’s Regensburg factory in Germany.

The high riding five-door, known at BMW under the internal codename F49, is set to  become the sixth dedicated SUV model to join the BMW line-up and the second to be based on the company’s versatile UKL platform – the same structure set to underpin the upcoming second-generation Mini Countryman, with which the new BMW is also heavily related.

Following a formula that has proven highly successful for BMW in recent years, the X2 has been conceived as a sporting alternative to the X1, in much the same way the BMW X4 provides a more dynamic take on the BMW X3 and the BMW X6 active as a more performance orientated option to the BMW X5. 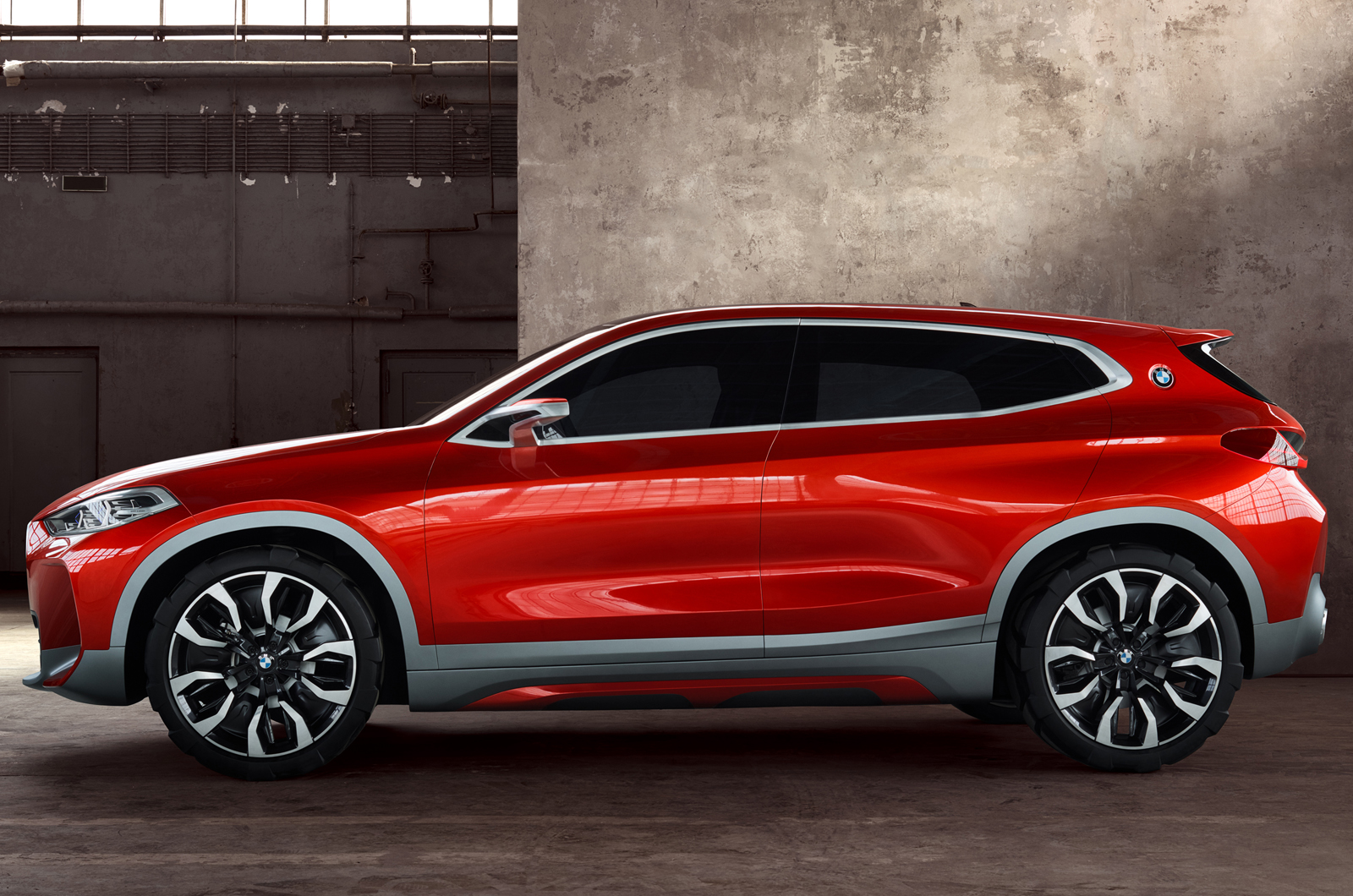 The positioning is reflected in the styling of the new X model, which BMW design boss, Karim Habib, describes as “combining the fast moving body language and low slung proportions of a coupe with the robust construction of an X model.”

Sporting a brawnier look than the comparatively BMW X1, the Concept X2 receives a distinctive looking front end dominated by a heavily structured bumper with a large central air duct and oversized air curtains on the outer edges.

It is combined with a uniquely shaped kidney grille that widens from top to bottom and is bordered by a heavy swathe of brushed aluminium. Meanwhile, an impression of technical precision is provided by angular laser light headlamps with intricate graphics that mimic BMW’s traditional twin Corona ring design with blue design highlights.

Further back, BMW’s latest production based concept boasts a heavily profiled bonnet as well as  greater rake to its windscreen, lower roofline and more angled tailgate than the X1 - elements that succeed in providing it with a far more sporting profile than its more practical sibling.

Pronounced fenders and large wheelhouses filled with 21 inch wheels shod with heavily treaded tyres add visual muscle to the flanks, which are otherwise dominated by a prominent swage line that provides the Concept X2 with a defined shoulder within its doors. Typical concept car flourishes include flamboyantly styled sills finished in structured grey and red plastic cladding and distinctive exterior mirrors.

The shallow glasshouse of the new BMW tapers quite dramatically towards the rear, ending with a modern interpretation of the German car maker’s classic Hofmeister kink within the C-pillar. As with the grille, the side window graphic is framed in a border of brushed aluminium.

At the rear, there is a prominent spoiler atop the tailgate, uniquely styled tail lamps and high mounted bumper – the latter of which provides its luggage compartment with an unusually high loading lip. 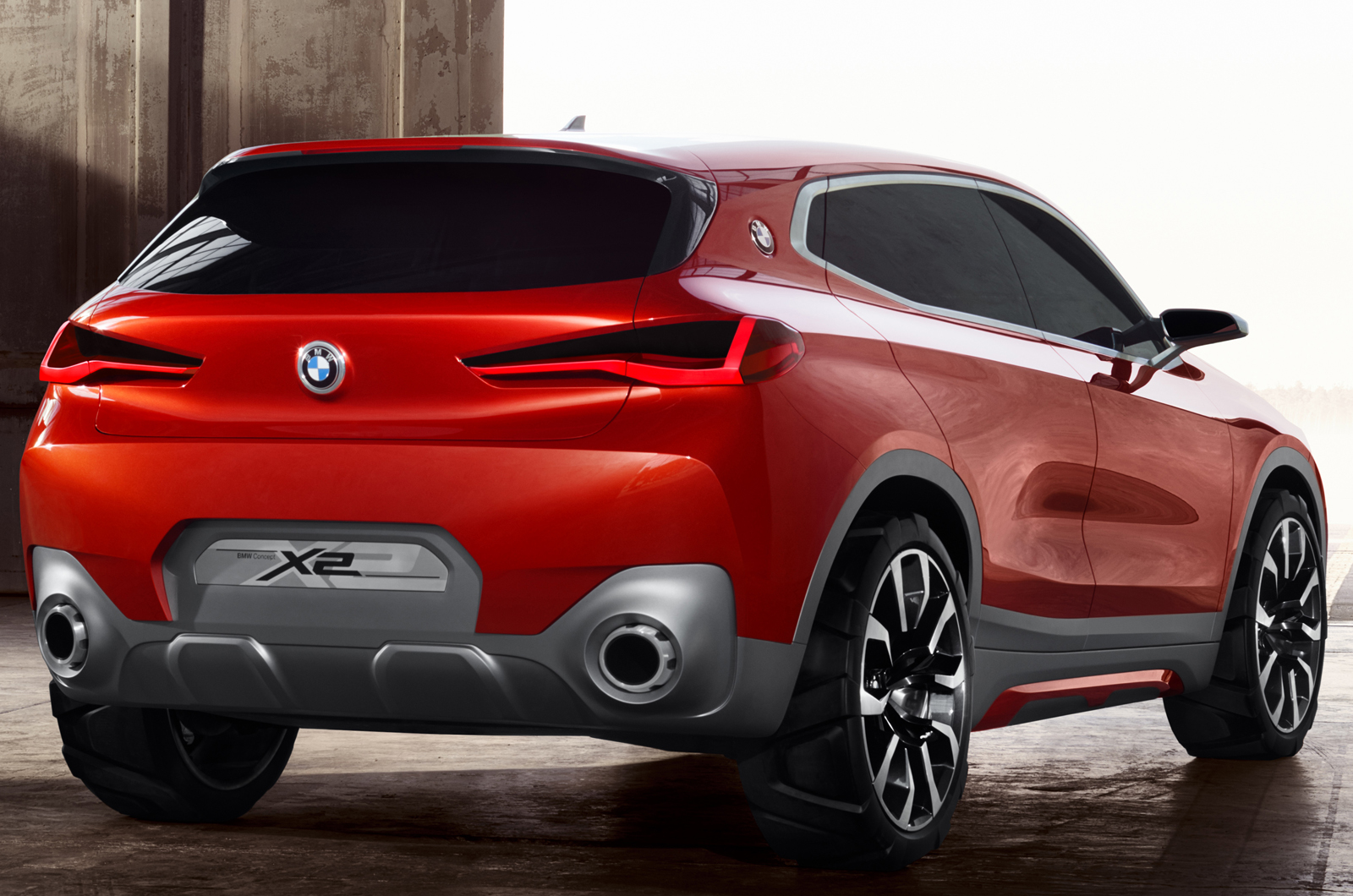 Although many of the more detailed styling touches of the Concept X2 are expected to be toned down before it reaches production, key elements such as its sporting silhouette and five door layout are set to be retained in a move that will see the new BMW compete directly with other style led SUV offerings, including the five-door Range Rover Evoque and Audi’s upcoming Q4.

Dimensionally, the X2 mirrors the measurements of the X1, which stretches to 4439mm in length, 1821 in width and 1598mm in height.

As with its more practical sibling, it will be offered with a range of transversely mounted turbocharged four-cylinder petrol and diesel engines.

Also planned is a sporting M-Performance model using a more heavily tuned version of the X2 xDrive20i’s turbocharged 2.0-litre four-cylinder developing in the region of 300bhp.

Gearbox choices will include a standard six-speed manual or optional six-speed automatic along with the choice of either rear- or four-wheel drive in combination with selected engines.

Speaking to Autocar, BMW head of design Karim Habib said: "we are not over promising with the design of this concept. It is close to how the production version of the X2 will look. The faster windscreen is a key element in providing it with a more sporting profile. It will be carried over to the production car."

So relieved that this does not look like a scaled down X4/X6. Those 2 are absolutely awful looking. Mazda's CX-4 is a lesson in how to style a sporty looking SUV. Once all the concept frippery has been removed, the basic shape bodes well for the production version and I can see it being one of the most desirable and best looking cars (with the exception of the i8) that BMW has produced for a long time!
bubbabubba23 30 September 2016

not sure what the final car will look, but as it is, this one looks fantastic
voyager12 30 September 2016

is a high-riding hatchback on big-diameter wheels. Looks good.
View all comments (14)