The Porsche Panamera 4 E-Hybrid, the fourth and most technically advanced of the new Panamera models to date, is on show at the Paris motor show.

One of two petrol-electric hybrid models planned to join the new Panamera line-up, the plush new, 456bhp four-wheel-drive Panamera 4 E-Hybrid will open for UK sales in April next year.

At the heart of the Panamera 4 E-Hybrid is a newly developed petrol-electric drivetrain that is also set to appear in next year’s Cayenne E-Hybrid. It uses Porsche’s recently unveiled twin-turbocharged 2.9-litre V6 petrol engine tuned to 325bhp and 332lb ft, in combination with an electric motor mounted in the front of the gearbox capable of delivering up to 134bhp and 295lb ft. 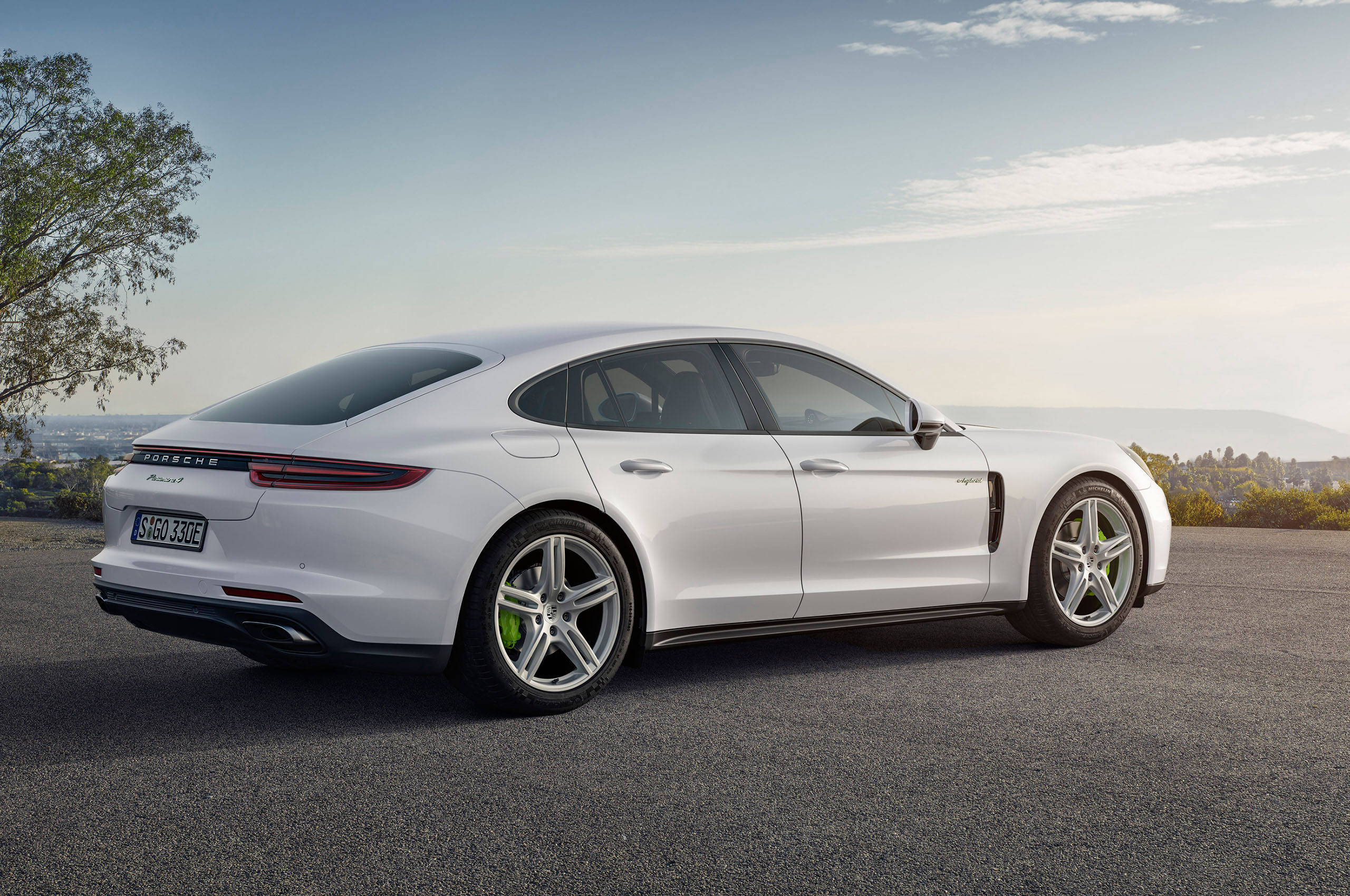 Together, the combustion engine and electric motor provide combined system outputs of 456bhp and 516lb ft. This provides the Panamera 4 E-Hybrid with 46bhp and 81lb ft more than the first-generation Panamera S E-Hybrid it replaces in the Porsche line-up.

It is also 22bhp and 111lb ft up on the second-generation Panamera 4S, which is powered by a more heavily tuned version of Porsche’s twin-turbocharged 2.9-litre V6, albeit without the assistance of an electric motor.

Significantly, Porsche has altered the programming of the electric motor to provide greater emphasis on performance. It now works in tandem with the petrol engine the moment the throttle is depressed. Previously, the throttle needed to be 80% engaged before the reserves of the electric motor were combined with those of the combustion engine in an earlier strategy aimed at optimising economy.

According to Porsche, the new programming is based on that originally developed for the 918 Spyder. It allows the driver to call up additional power from the electric motor at all times.

The result is a 0.9sec reduction in the 0-62mph time along with a 5mph increase in top speed over the superseded Panamera S E-Hybrid. Despite this, the new model's average CO2 emissions are just 56g/km on the European test cycle.

As on other second-generation Panamera models revealed to date, drive is channelled through a new eight-speed dual-clutch automatic gearbox and multi-plate clutch four-wheel drive system. The earlier Panamera S E-Hybrid, on the other hand, used an eight-speed torque converter-equipped automatic gearbox.

Altogether there are six different driving modes. They include the Sport and Sport Plus modes of other new Panamera models equipped with the Sport Chrono package, along with the E-Hybrid specific modes of E-power, Hybrid Auto, E-Hold and E-Charge. 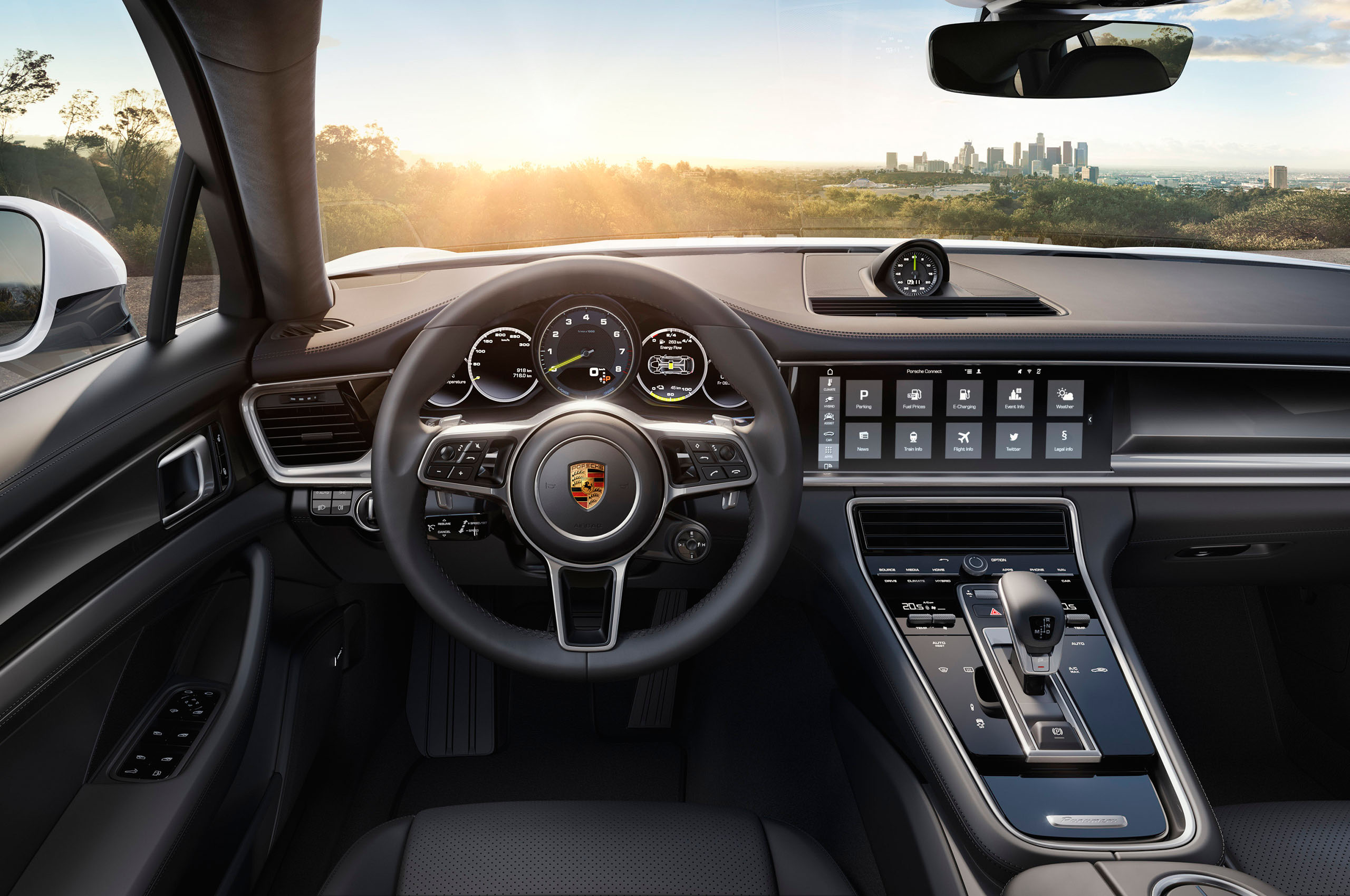 As with its predecessor, Porsche’s latest hybrid model is programmed to start in E-power mode. With a fully charged battery, it is claimed to offer a pure electric range of up to 31 miles at speeds limited to 87mph.

Power for the Panamera E-Hybrid’s electric motor is provided by a liquid-cooled lithium ion battery. Despite boasting a 4.7kWh increase in energy stores at 14.1kWh, it is claimed to weigh no more than the unit used by the older Panamera S E-Hybrid.

Porsche says the battery can be charged in 5.8 hours using a standard 3.6kW charger, while an optional 7.2kW charger is claimed to reduce the charging time to 3.6 hours. Charging can be started via the Porsche Communication Management infotainment system or remotely via the Porsche Car Connect app. An auxiliary air conditioner also now allows the cabin to be cooled during charging.

A so-called power meter allows the driver to keep tabs of the operation of the hybrid driveline via a standard 12.3in touch screen display. Similar to that found on the 918 Spyder, it provides detailed data on energy stores, including the amount of electrical energy being used in real time as well as that recovered through recuperation. There is also a 'boost assistant' that displays the energy available for boosting performance via the electric motor as well as a 'hybrid assistant' that provides information on how to regulate the electric drive for maximum economy.

The Panamera 4 E-Hybrid rides on a standard air suspension. The newly developed underpinnings use a three-chamber design in combination with electronic damper control and dynamic chassis control that supports torque vectoring and active roll stabilisation.

I haven't been a Hybrid

I haven't been a Hybrid person at all but this has my interest much more than EV's which are totally useless in remote areas.I think if you are still a car person rather than an SUV sheep Porsche has really given a great 3 choices in the 4S,4S diesel,and 4e-hybrid.So you can have which ever mode you desire. Until this my UK choice is the 4S diesel and my Canada choice is the 4S but now I'm not so sure.
The Apprentice 9 September 2016

The real world range will be

The real world range will be 20 miles, fuel consumption 23-33mpg. Unless they have fitted electric heating the engine will fire up on cooler days no matter how much charge is in the battery to provide heat making economy worse. If it does have electric heating the range will be largely reduced 8 months of the year in the UK by powering that. --- your thinking about this all wrong considering it in practical terms. Its simply a tax dodger as the current emission test allows one way with a full battery averaged with the other way without so at worst it halves its true output. Until the test is changed there will be endless cars like this for one reason only.
Marv 9 September 2016

..this is a Panamera I'd actually consider if I had the money. The styling is very much improved with the detailing around the rear 3/4 greatly reducing the bulk of the original. They range of the hybrid is spot on for my local trips to work, shops etc. Will be interesting to see what the economy is like in longer, higher speed journeys though.