BACK TO ALL NEWS
Currently reading: 2016 Porsche Panamera revealed
UP NEXT
Lamborghini confirms LMDh entry for 2024

The second-generation Panamera is the first to be based on Porsche’s new MSB platform; set to rival Audi's A8 and the Maserati Quattroporte
Open gallery
Close

The second-generation Porsche Panamera has been unveiled at an event in Berlin, ahead of UK deliveries arriving in November.

Read our review of the Porsche Panamera Turbo here

The new Panamera is a car that, Porsche says, has been “redeveloped and realigned down to the last detail” in a renewed challenge to luxury rivals, such as the soon-to-be-replaced Audi A8, latest BMW 7 Series and newly updated Maserati Quattroporte.

Live stream of the reveal

The new Panamera is based on the second incarnation of Porsche’s MSB (or modular standard architecture) platform. It contributes to a reduction in weight through the use of aluminium for the main structure as well as the bonnet, wings, roof and tailgate. 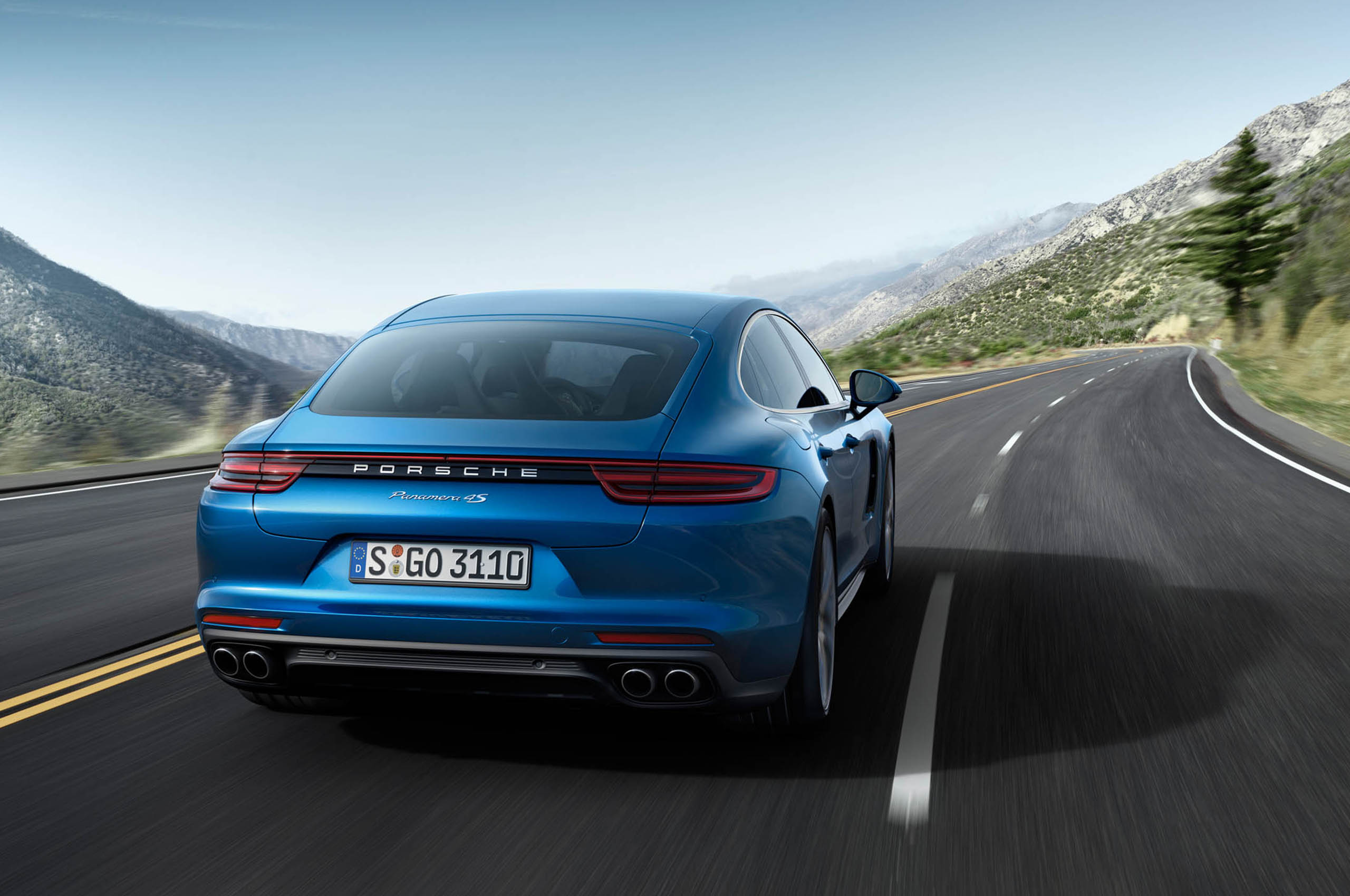 Although Porsche hasn’t specified the Panamera’s kerb weight, a claimed power-to-weight ratio for the Panamera Turbo of 3.6kg per 1PS (Pferdstärke, equivalent to 0.986bhp) would suggest that it tips the scales at 1980kg, which is 10kg more than the outgoing version.

The new model marks a concerted effort by Porsche’s design team to provide the Panamera with some of the iconic stylistic cues of the 911, with tauter surfacing and more precise swage line detailing.

A more curved roofline has reduced the height above the rear passenger compartment by 20mm, with the effect that the new Panamera looks lower and longer than before. This is further enhanced by a wheelbase that is 30mm longer, at 2950mm. 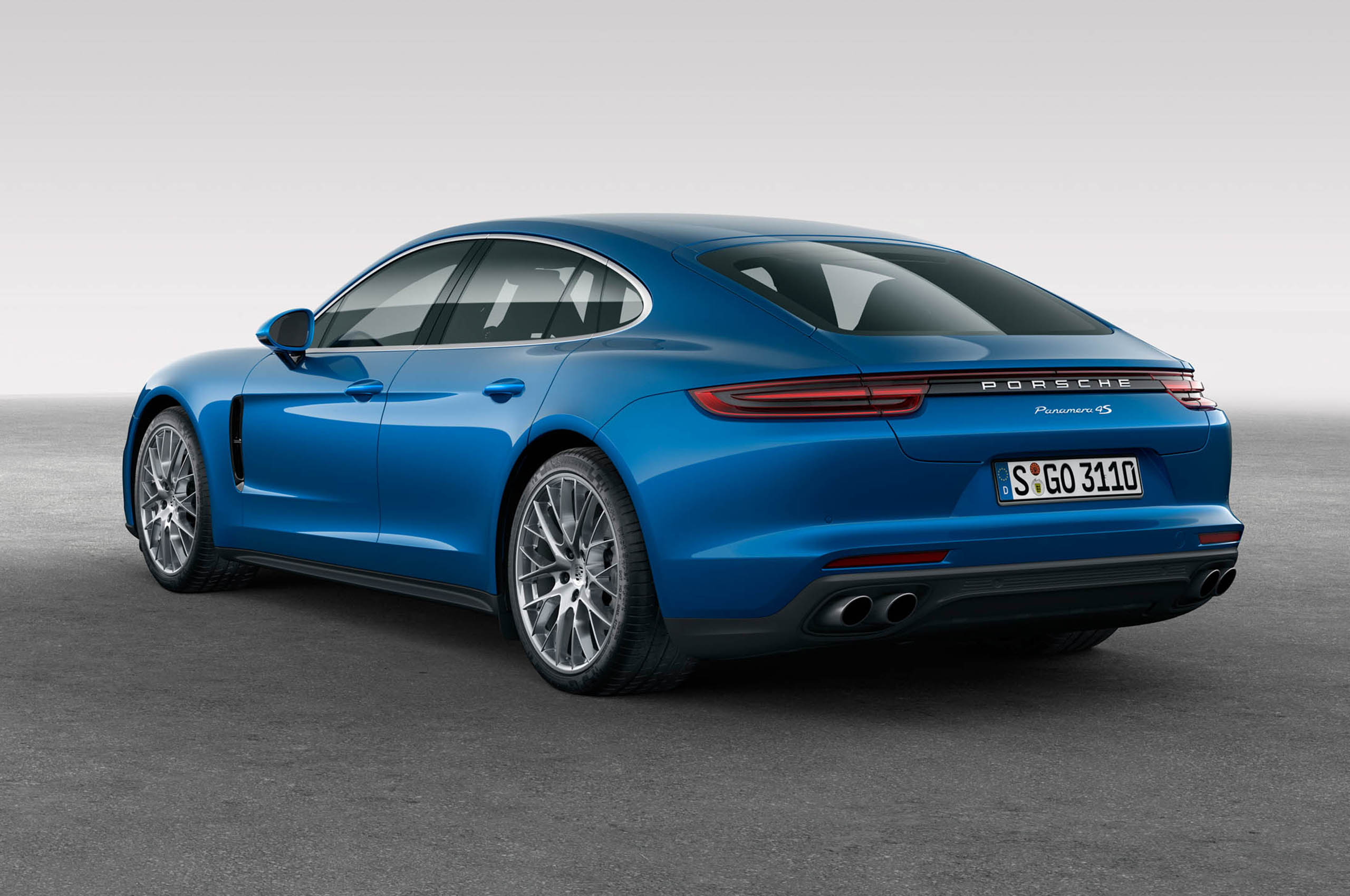 Despite the reduction in roof height at the back, Porsche says rear head room has increased. So has the boot capacity, up by 50 litres over the first-generation Panamera, at a nominal 495 litres. That extends to 1304 litres when the standard 40/20/40 split rear seat is folded.

The new Panamera is the first recipient of Porsche’s new turbocharged 2.9-litre V6 and twin-turbocharged 4.0-litre V8 petrol engines. In a move that is becoming increasingly common among performance car makers, the new V6 and V8 engines rely on twin-scroll, counter-rotating turbochargers that are mounted centrally within the space between the two cylinder banks. This, claims Porsche, provides shorter charging paths for added response and greater torque at lower engine speeds.

The new engines come mated to a new eight-speed dual-clutch automatic gearbox and a reworked version of the multi-plate-clutch four-wheel drive system used by the Mk1 Panamera.

The new turbocharged 4.0-litre V8 in the new Panamera Turbo develops 542bhp at 5750rpm and 568lb ft between 1960rpm and 4500rpm. When the car is fitted with the Sport Chrono package, it has an official 0-62mph time of 3.6sec, beating its predecessor by 0.5sec and delivering the same 190mph top speed. 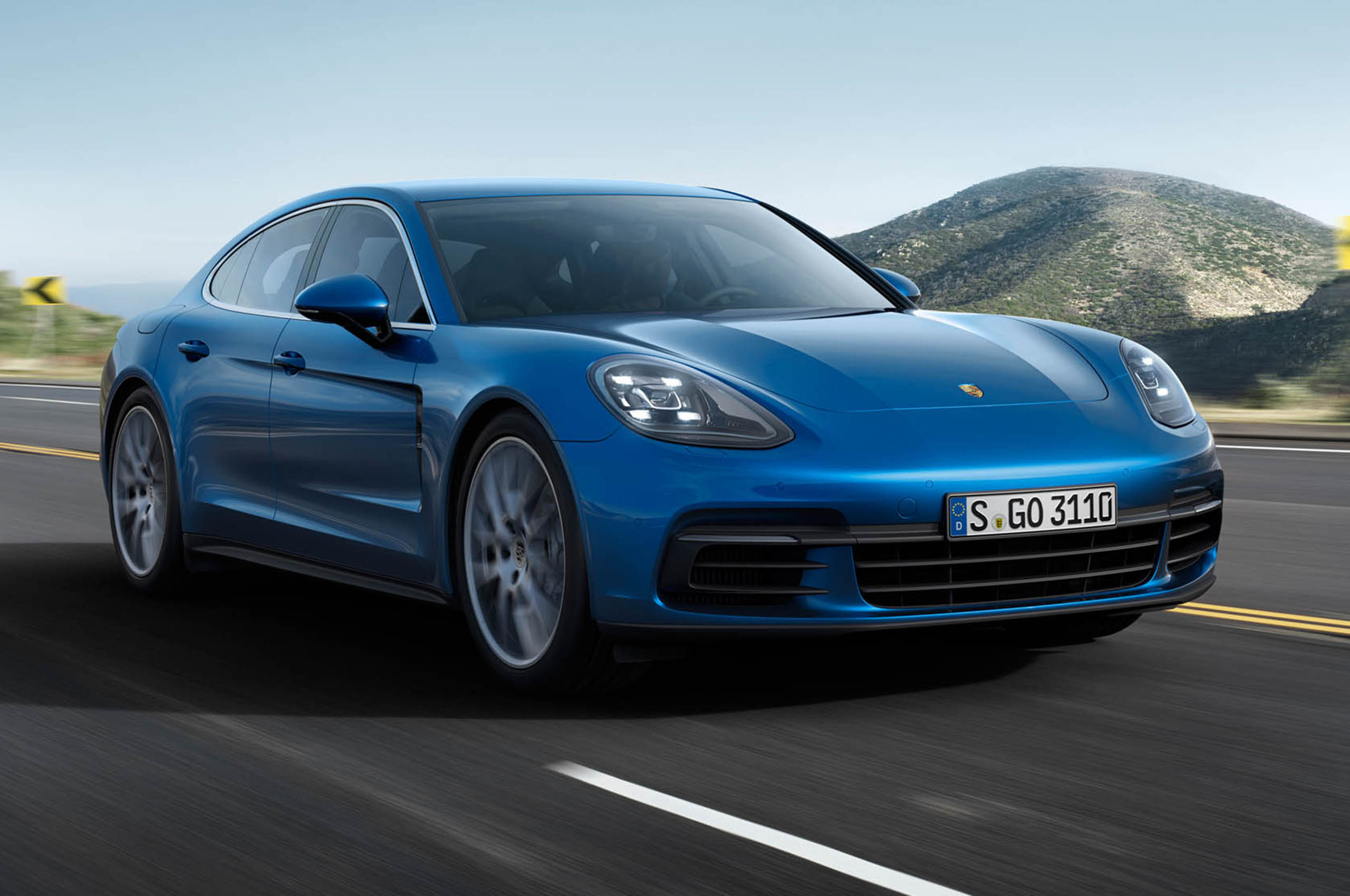 New to the line-up is the Panamera 4S Diesel. It is the first Panamera model to be offered with a V8 diesel engine. The 4.0-litre unit produces 416bhp at 3500rpm and 626lb ft of torque from 1000rpm to 3250rpm. The new V8 oil burner provides the Panamera 4S Diesel with the distinction of being the world’s fastest production diesel, according to Porsche, with an official 0-62mph time of 4.3sec (in combination with the Sport Chrono package) and a 177mph top speed. Perhaps even more impressive is its fuel efficiency: a combined 42.2mpg, with average CO2 emissions of 176g/km.

Porsche makes big claims about the new Panamera’s agility. It features a new electromechanical steering system and, mirroring recent developments in its sports car line-up, four-wheel steer in a bid to further enhance steering precision despite the car’s increase in dimensions.

Changes to the electrical system have brought a number of new driver assistance features, such as InnoDrive, an autonomous driving function that includes adaptive cruise control. 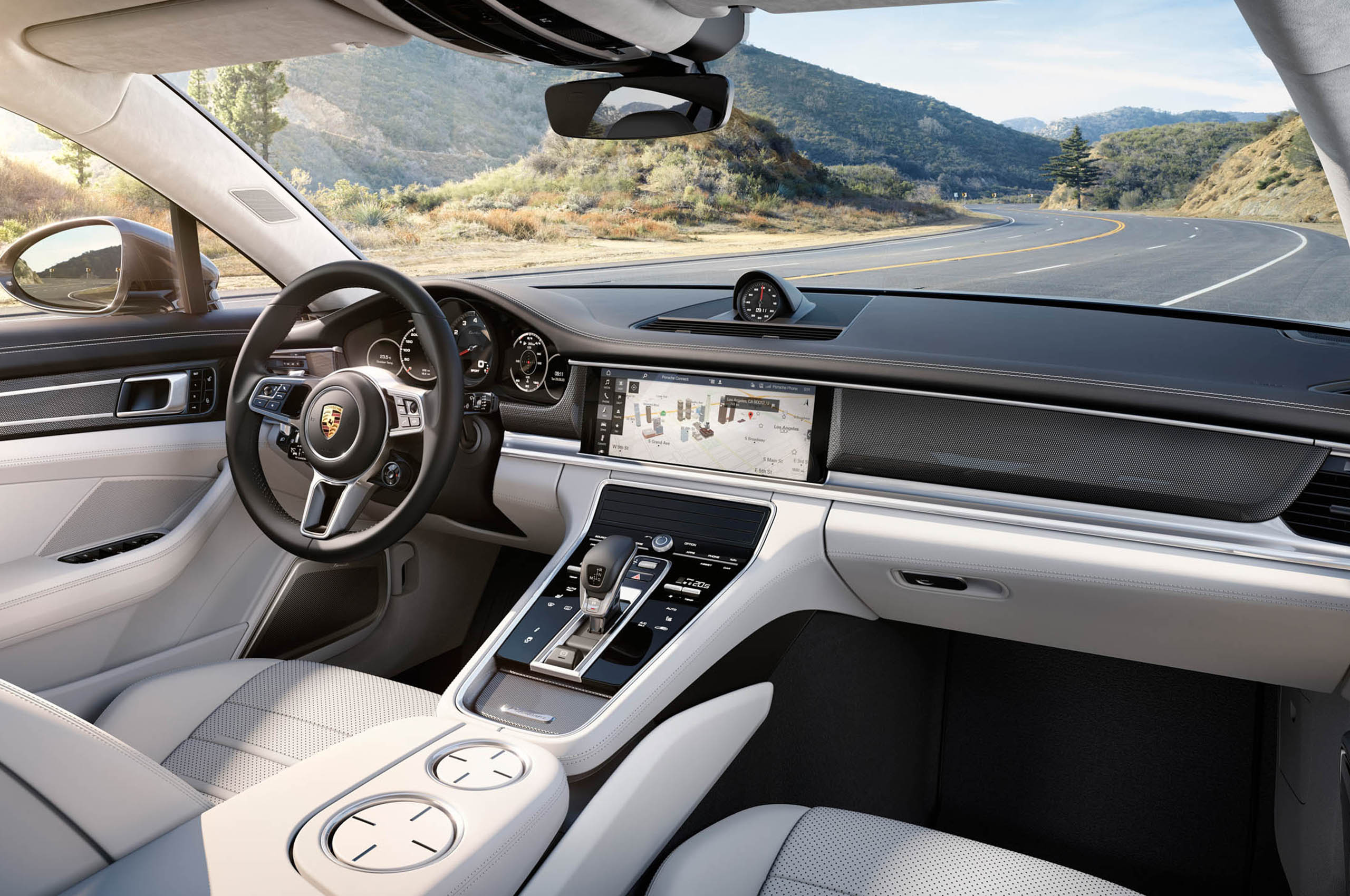 Inside, the Panamera introduces a new interior design with touch-sensitive surfaces along the middle console conceived to reduce the number of buttons confronting the driver.

Described as continuing the digitalisation theme that began with the interior of the 918 Spyder, the dashboard houses a heavily hooded instrument binnacle with a traditional, centrally mounted analogue rev counter book-ended by two 7.0in high-definition displays. A 12.3in touchscreen is used for the various functions of the Porsche Communication Management system, including navigation, entertainment and connectivity features.

The new Panamera can be ordered now and UK deliveries will begin in November.

Along with the liftback Panamera pictured here, Porsche is also putting the finishing touches to an estate variant, first previewed by the Sport Turismo concept at the Paris motor show in 2012 and due on sale by the end of next year.

This second-generation of Porsche’s MSB platform is set to play an important role in the future of Porsche and its Volkswagen sister company, Bentley. It is claimed to offer more flexibility than its predecessor, thanks to a larger number of track and wheel base combinations.

It will underpin the Panamera in both standard and long-wheel base (Executive) guises and liftback and estate bodystyles. It is also being used for next year’s all-new Bentley Continental GT coupé, as well as a follow-up to the Continental GT Convertible and a Flying Spur replacement.

Earlier comments from former Porsche boss Matthias Müller suggested the MSB structure would also be used underneath a spiritual successor to the 928, but Autocar can confirm that development of this particular model is yet to begin in earnest.

“We’re exploring other avenues,” said Gernot Döllner, project leader for the new Panamera. However, with engineering activities at Porsche’s Weissach-based research facility already pushed to the limit with next year’s all-new Cayenne, as well as the next-generation 911, plans for a two-door coupé in the mould of the 928 have been now placed on hold.

Don’t rule out the MSB platform supporting another two-door coupé and a possible convertible, though. Indications are that Bentley boss Wolfgang Dürheimer is close to giving the go-ahead to a production version of the EXP 10 Speed 6 concept revealed at the Geneva motor show last year, using a short-wheelbase version of the new platform.

It looks more or less the same as the last one. Which is to say, bleeding awful. Yet another VAG disappointment.
Cyborg 29 June 2016

No mention above of the 48 volt electrical system being adopted across all future VW group cars...does this new Porsche have it or not?
Cyborg 29 June 2016

A better overall shape than the first-gen model (just about the ugliest modern car in existence!) but still far from being handsome. The interior is a big improvement though, but I wonder if all those glossy glassy surfaces won't cause reflections in the cabin when driving? Still, very concept car...I like it! We also now have an inkling what the next-gen 911's dash will look like.
View all comments (18)