Audi Sport has bolstered its line-up with the launch of the 444bhp twin-turbocharged 3.0-litre V6-powered RS5 Sportback.

Revealed at the New York motor show, the all-wheel drive fastback joins the RS5 Coupe and RS4 Avant in an expanded line-up of new mid-range RS models aimed at providing stiff competition to the likes of the BMW M3 and M4, and the as Mercedes-AMG C63 saloon and coupe.

UK sales for the first ever RS5 Sportback are expected to kick-off in late 2018, with officials from Audi Sport suggesting it will be priced close to the £63,575 RS5 Coupe in Britain. 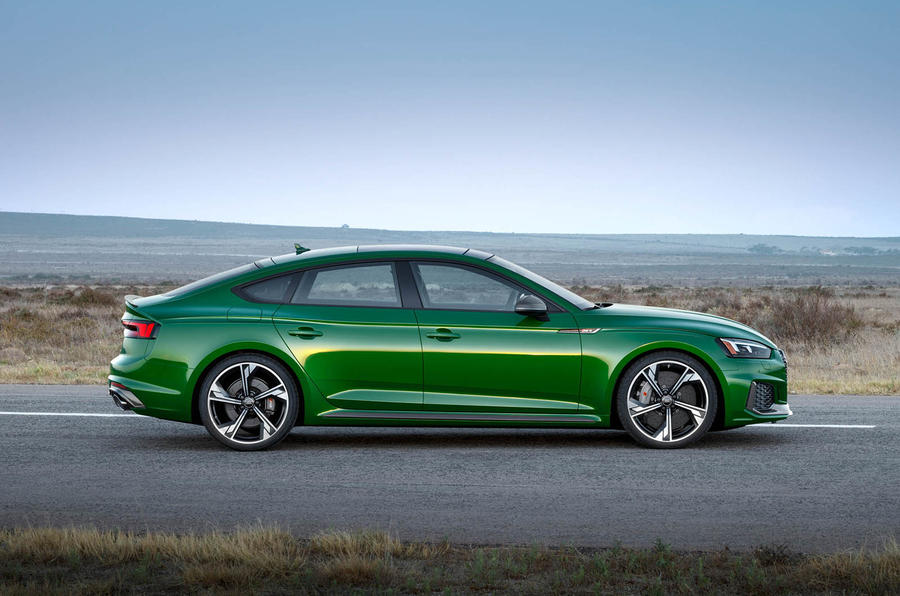 “The Audi RS 5 Sportback is more than just a trade fair novelty – it offers something new,” says Audi Sport chief Michael-Julius Renz. “Our interpretation of a five-door performance coupe has neither predecessor models, nor a direct competitor.”

As with the RS5 Coupe launched in 2017, the angular headlamps of the RS5 Sportback adopt tinted graphics and have also been altered with the addition of small vertical air ducts along their outer edges. 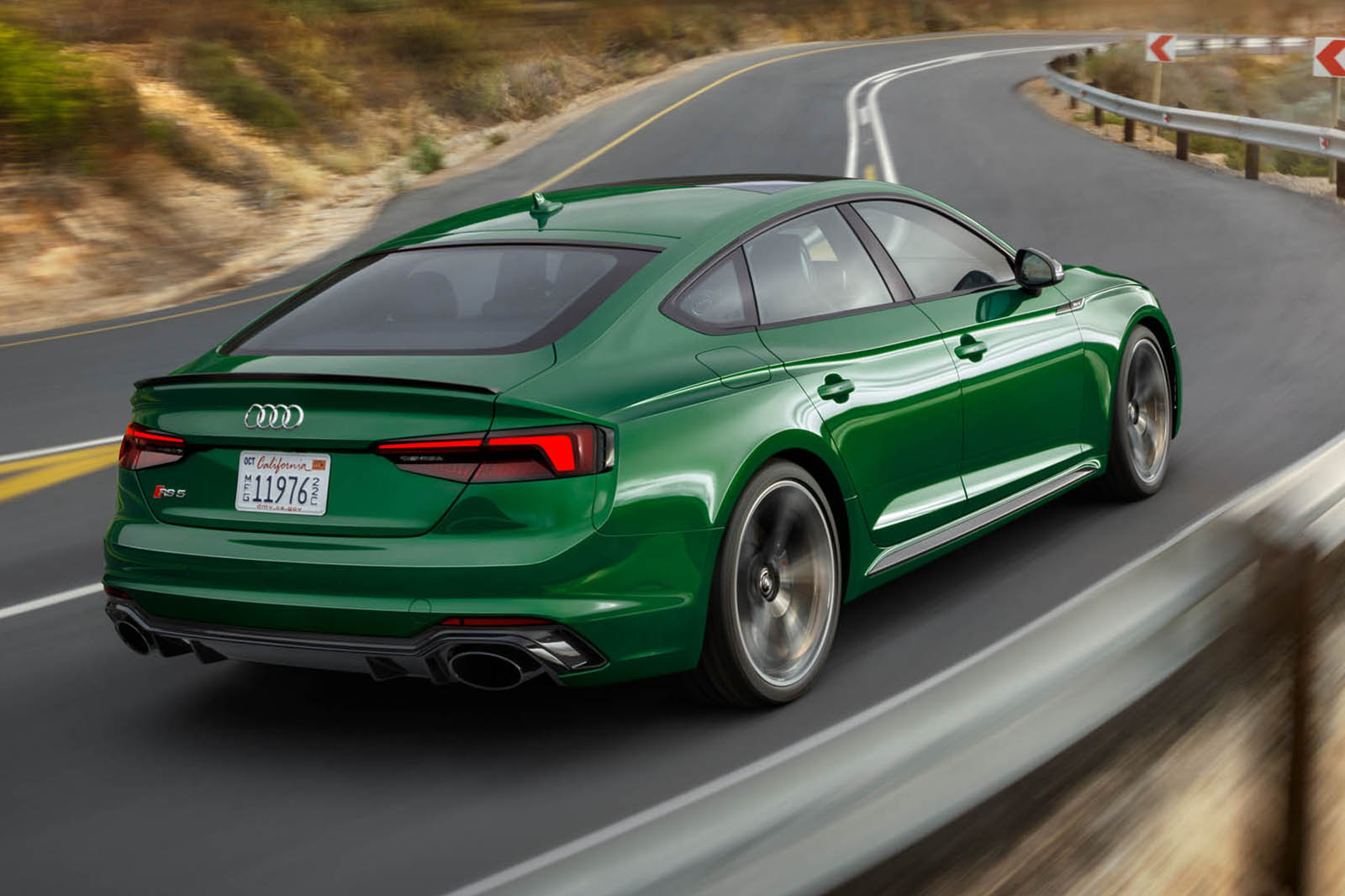 Further back, the front fenders have been widened by 15mm with wider blisters above the wheel arches while the side sills receive high gloss black styling elements and the exterior mirror use a carbon fibre optic

At the rear, the RS5 Sportback receives wider rear fenders extending out by the same 15mm over the standard Audi A5 Sportback as those up front as well as a subtle fixed spoiler. There is also a uniquely styled rear bumper housing a high gloss black diffuser and Audi Sport’s signature oval tailpipes.

The new RS model comes as standard with 19-inch wheels, although buyers can option it with 20-inch rims. Two additional styling packages in either carbonfibre look or matt silver are also available.

The new RS5 Sportback is powered by the same twin-turbocharged 2.9-litre V6 petrol engine already used by the RS5 Coupe and RS4 Avant. Developed in an engineering partnership between Audi and Porsche, the longitudinally-mounted unit develops a claimed 444bhp and 443lb ft of torque on a band of revs between 1900 and 5000rpm. 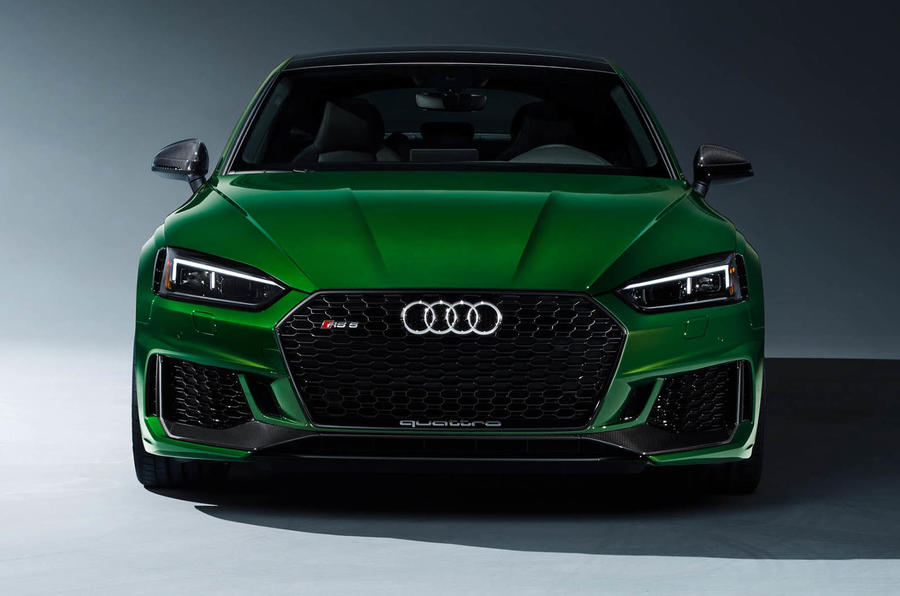 With a claimed kerb weight of 1840kg, this provides the new Audi Sport model with a power-to-weight ratio of 241bhp. Official performance figures give a 0-62mph time of just 3.9sec and limited 174mph top speed.

Drive is placed through a standard eight-speed torque converter equipped automatic gearbox and a specially tuned version of Audi’s Torsen torque sensing quattro four-wheel drive system. It apportions power in a nominal 40 per cent:60 per cent split between the front and rear axles, to provide the new Audi Sport model with a distinct rear-wheel drive bias.

When a loss of grip or traction is detected, the RS5 Sportback’s four-wheel drive system can alter the delivery of power, sending up to 85 per cent to the front-wheels or alternatively 70 per cent to the rear wheels when required. 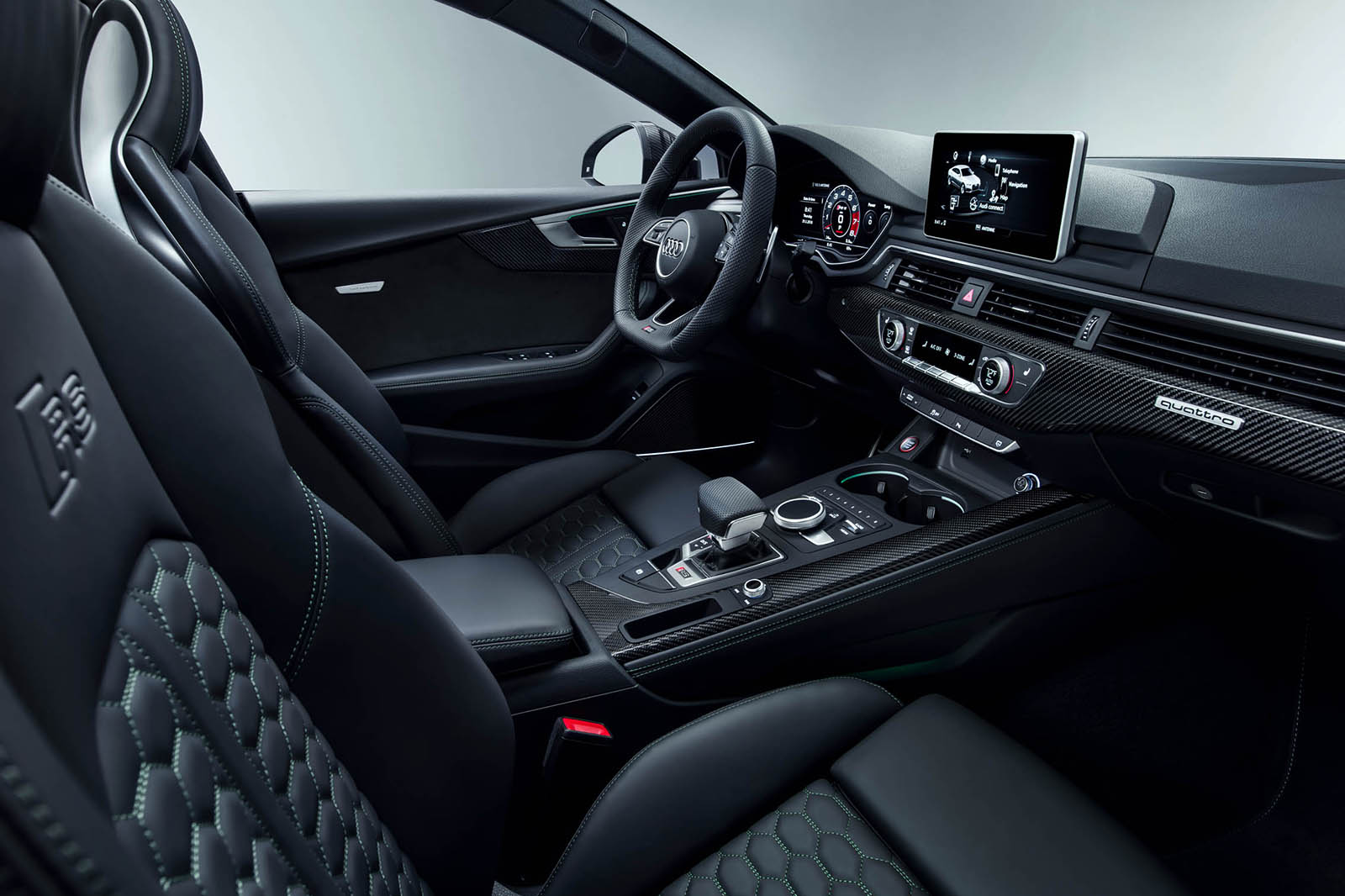 Additionally, an optional Sport Differential can be ordered. It provides a torque vectoring effect to constantly alter the amount of power delivered to each individual rear wheel in a process Audi Sport says enhances the handling of its new model during all out cornering.

The RS5 Sportback features firmer springs and fixed rate dampers, and has been lowered by 7.0mm. It also receives different camber rates to the suspension used on the S5 Sportback. There is also an optional RS Sport Suspension, with even firmer springs and variable rate dampers. The latter is part of the Dynamic Ride Control system, which also includes ceramic brake discs and revamped steering mapping. The revamped suspension also features a special version of Audi's Drive Select system.

Does it ride well

Does it steer well

Does it handle well

Did you actually drive it...if I were to presume on past form then likely not, unless Audi has stopped making cars or Porsche has been put in charge of "making Audi"

One of the first lines in article "Revealed at the New York motor show", not "Revealed at an Autocar test" which started this week. It was indicated throughout that the article was just information.

The ‘air vents’ beside the

The ‘air vents’ beside the lights are nothing of the sort. The wide body looks are great but the detailing is rather crass - the sort of thing you’d expect from a cheap American muscle car of yesteryear.

You will never see a green one in real life....

..they will be in monochrome somewhere between black and white.

Seen an A3 in very similar colour

.... most Audi owners imagination never gets beyond grey.