BACK TO ALL NEWS
Currently reading: 542bhp Jaguar F-Pace SVR squares up to Porsche Macan Turbo
UP NEXT
2023 Lotus Type 133 to be firm's most luxurious model yet

This is the Jaguar F-Pace SVR, the first-ever high-performance SUV made by the brand as it looks to exploit the model’s massive sales success and capitalise on booming demand for fast high-riding cars.

The F-Pace SVR is the second Jaguar SVR after the Jaguar F-Type and has been developed by Jaguar Land Rover’s Special Vehicle Operations (SVO) division. Intriguingly, it has been launched before any high-performance versions of Jaguar’s new saloons – this also underlines the market shift away from such cars. At present, there are no plans to launch an SVR version of either the Jaguar XE or Jaguar XF, besides the limited-run XE SV Project 8 that was made for a Nürburgring record attempt.

Opinion: why the Jaguar F-Pace, rather then the XE or XF, gets the SVR treatment 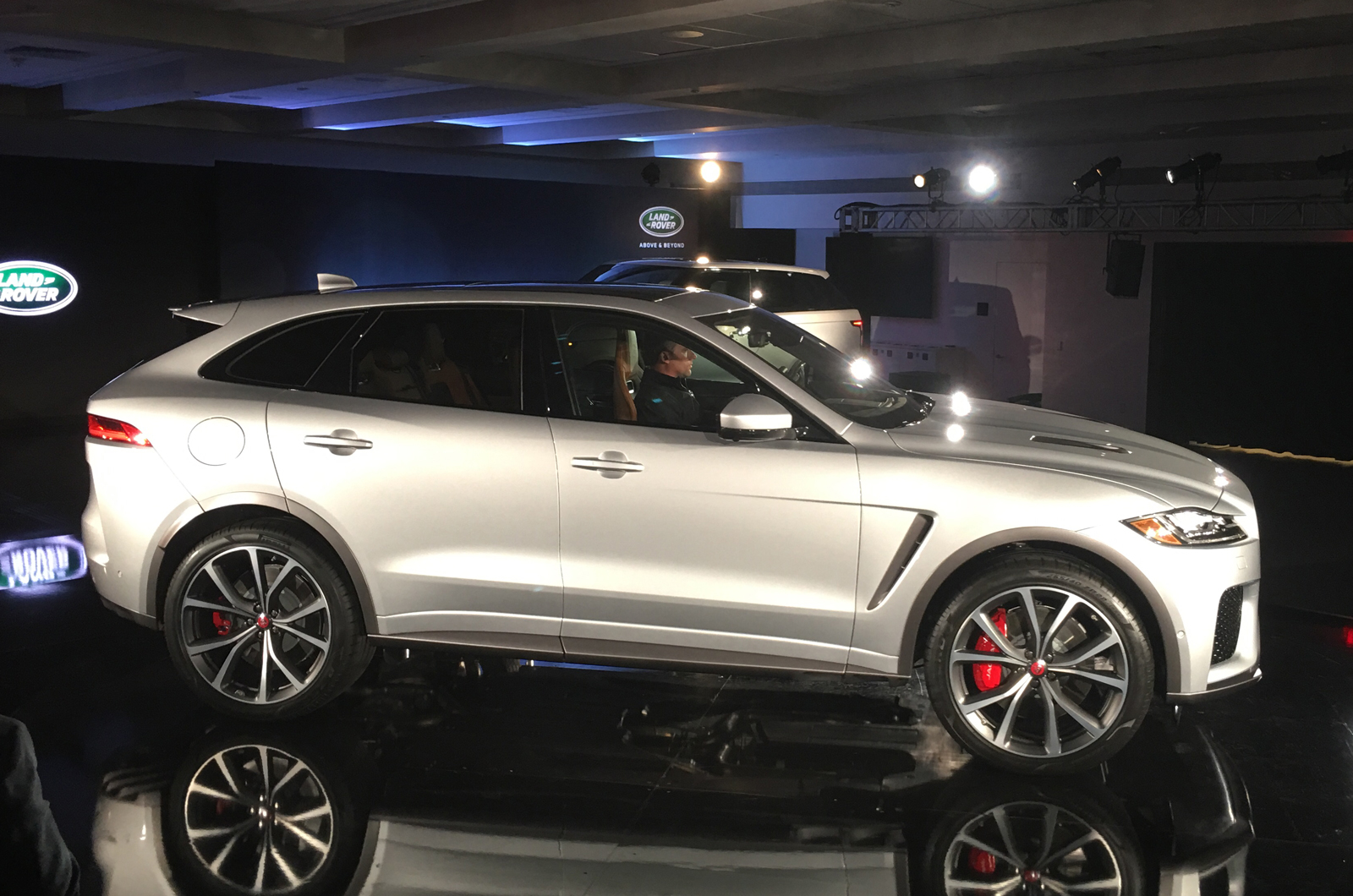 Highlighting the rate of development of modern cars, it also matches the 0-62mph acceleration of the last-generation Audi R8 V10, launched in 2009. The F-Pace SVR’s top speed is rated at 176mph. As such, on paper, it outpunches such rivals as the Porsche Macan Turbo, which, in Performance Package set-up, produces 428bhp, hits 62mph in 4.4sec and has a top speed of 169mph. Jaguar used the Macan as a benchmark in the development of the car, along with performance estates from Audi Sport and Mercedes-AMG.

Although the V8 has been used across previous Jaguar and Land Rover models in various states of tune – including in a more powerful 567bhp form in the F-Type SVR and Range Rover Sport SVR – the SVO engineering team has worked on giving it bespoke characteristics to suit the SUV’s dynamic abilities. 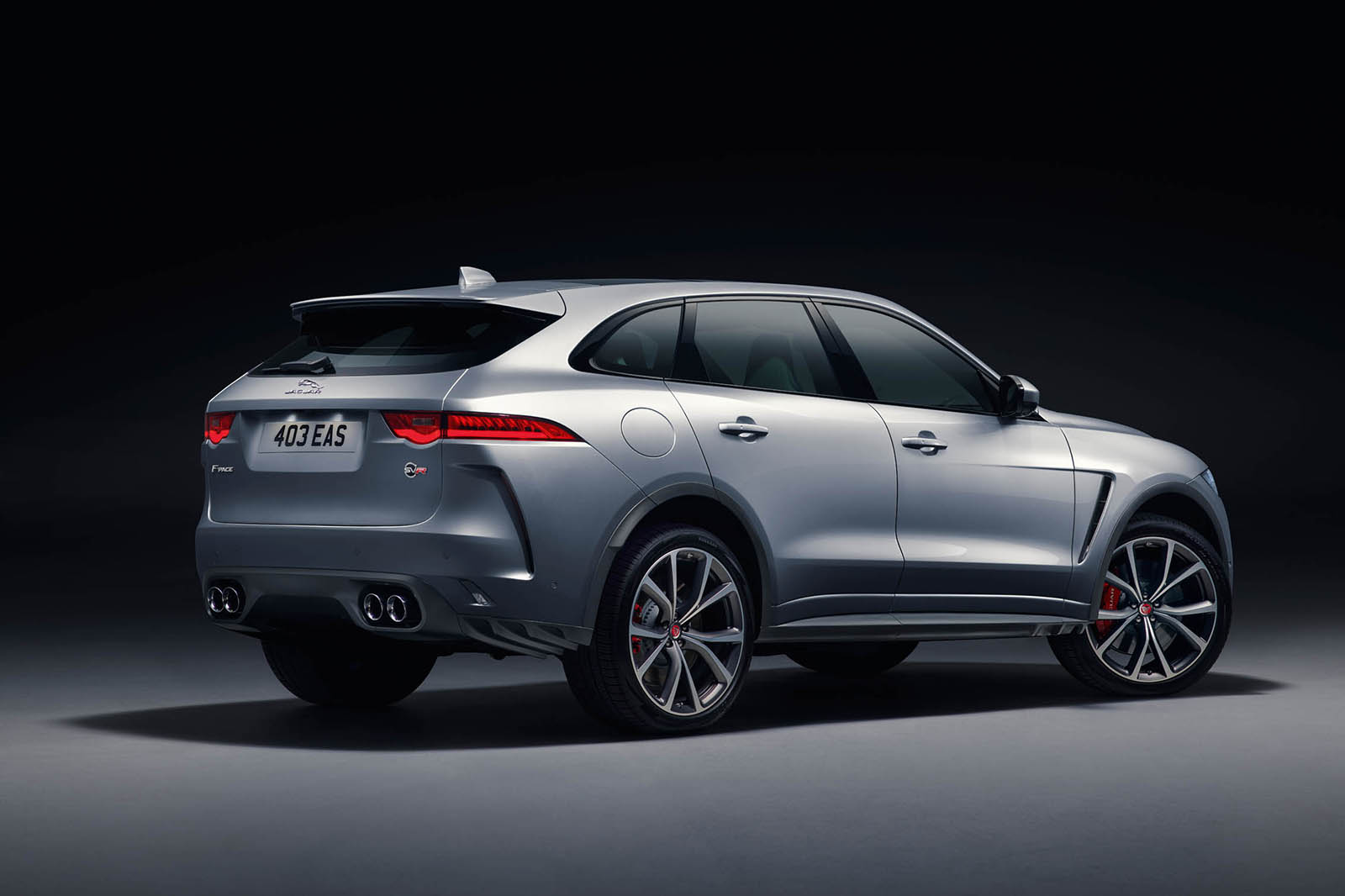 Mike Cross, Jaguar’s chief engineer for vehicle integrity, is also at pains to point out that the F-Pace SVR has not been built for straight-line performance alone. He said: “It delivers the handling and agility to match its performance. Everything from the steering to the bespoke suspension set-up has been tuned specifically.”

A key component of the car’s dynamic performance is Jaguar’s rear Electronic Active Differential (EAD). The SVR model is the first F-Pace to use this system. It was initially developed for the F-Type and plays a central role on the SVR version of that car, helping to maximise torque to each wheel with the car’s all-wheel drive system. It has been tuned specifically for the F-Pace SVR, as has the adaptive suspension, electronic power-assisted steering set-up and the available driving modes, the most aggressive of which is called Dynamic and initiates faster gearshifts, sharper throttle responses and more alert steering behaviour.

Jaguar also says it has fitted springs that are 30% stiffer than the standard F-Pace’s at the front and 10% stiffer at the rear. Combined with a new anti-roll bar, they contribute to a 5% reduction in body roll. 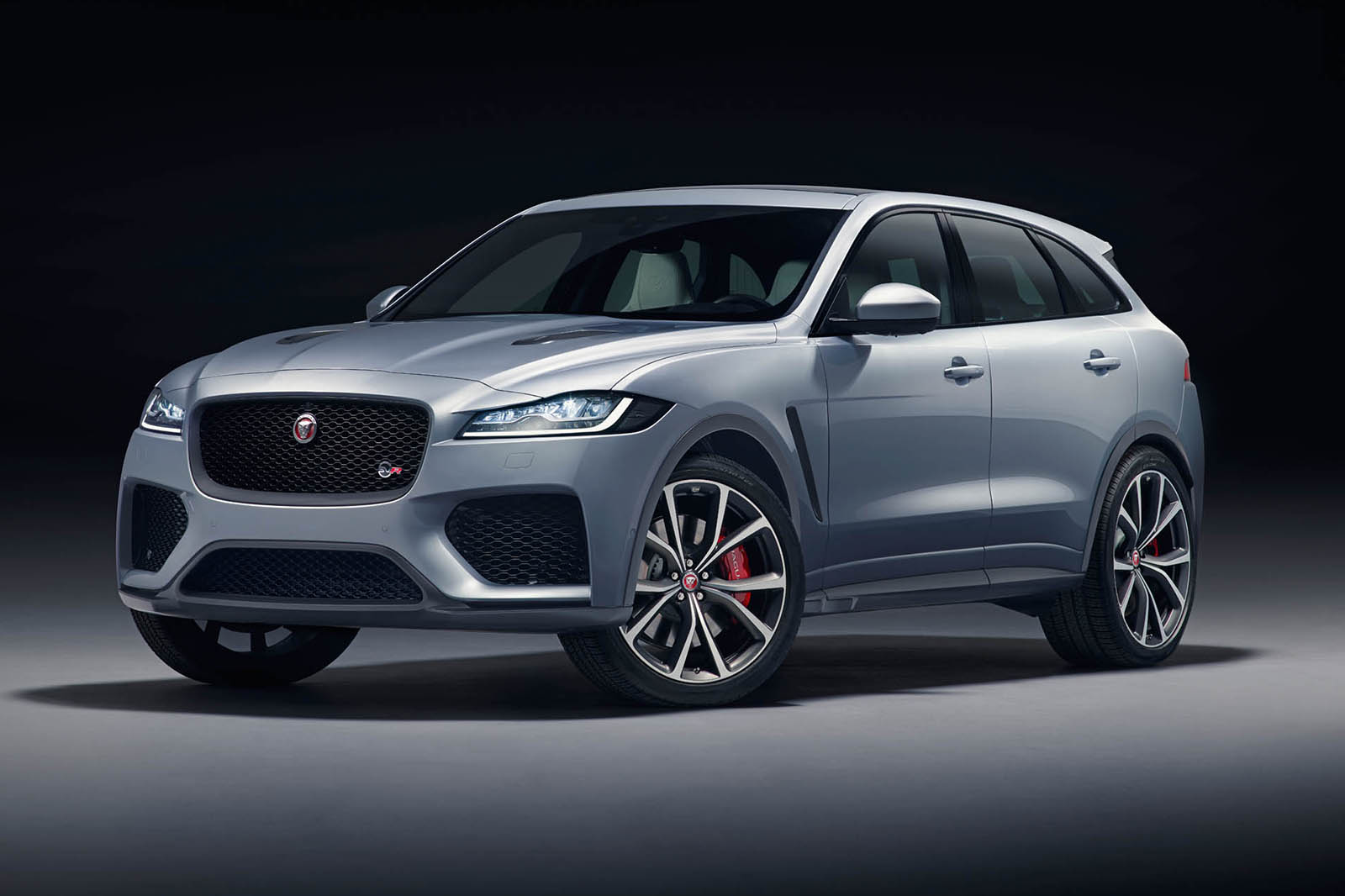 However, SVO dynamics manager David Pook said the F-Pace SVR is not an overly firm car with an uncomfortable ride and offers greatly different characteristics between its driving modes.

“You don’t need to make a car uncomfortable for the sake of it,” he said. “It can be really engaging when you want it to be. You’ll be surprised on a B-road just how agile and responsive it is.” 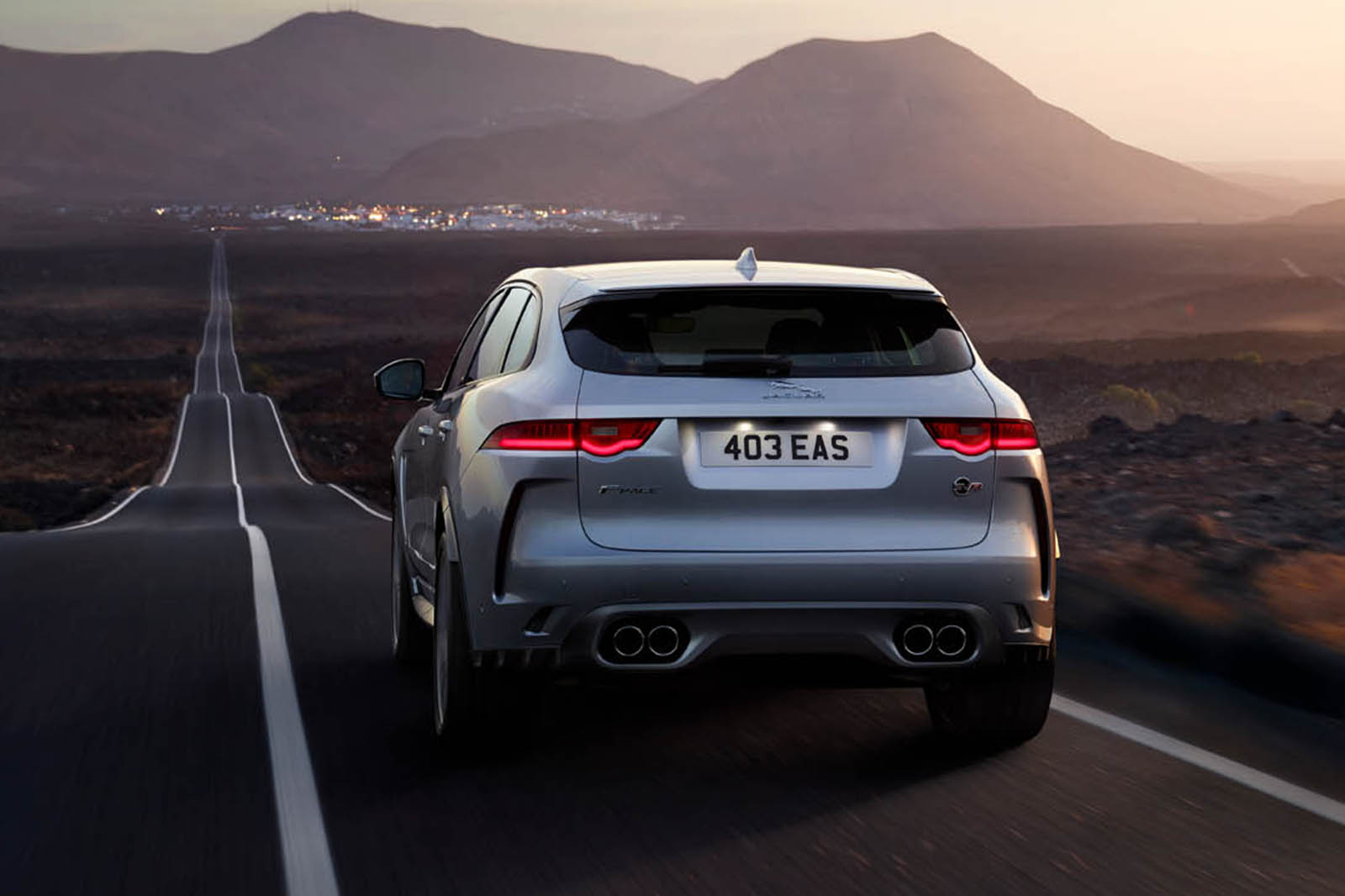 Both new wheel designs were created to deliver greater airflow to the larger 395mm front and 396mm rear brake discs. Again, the two-piece discs were constructed to a new design to be lighter and thereby enhance the F-Pace SVR’s handling, although Jaguar has not revealed the scale of the weight savings.

Continuing the theme of saving weight, the F-Pace SVR features an exhaust that is 6.6kg lighter than the standard car’s, as well as allowing increased gas flow to reduce back pressure and extract more performance from the car. The system also features Jaguar’s so-called Variable Valve Active Exhaust, which generates enhanced sound as more focused driving modes are selected.

Aerodynamic enhancements include larger air intakes at the front and side of the front bumper. These lower pressure in the wheel arches, reducing lift and providing extra cooling while optimising high-speed stability. The bonnet is also resculpted and features vents to extract hot air from the engine bay. 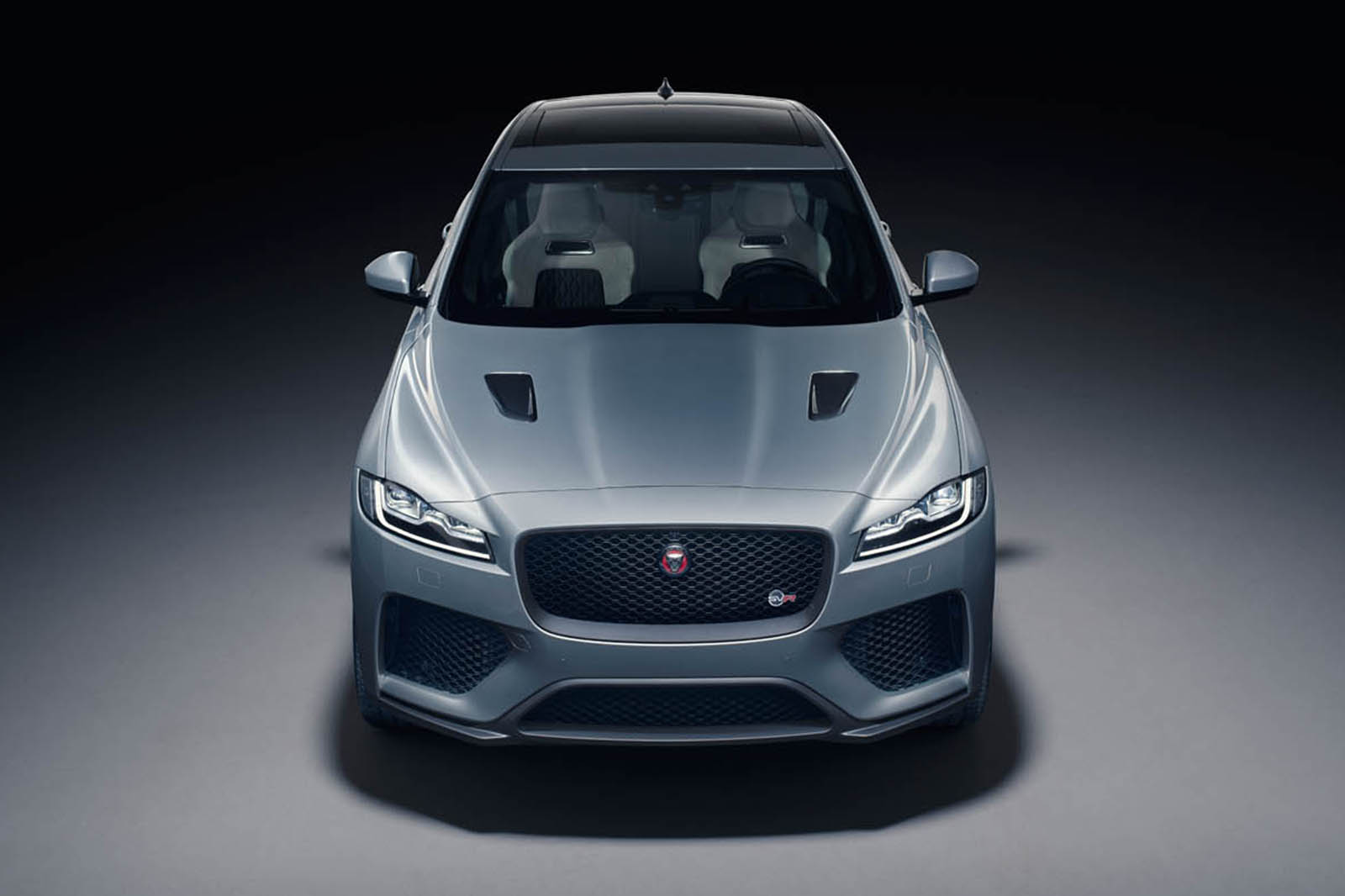 At the rear, the remodelled bumper houses quadruple tailpipes and incorporates side strakes that aid aerodynamic performance by smoothing airflow away from the rear of the vehicle. The F-Pace SVR also has a distinctive rear spoiler to reduce lift and drag and aid high-speed stability.

Inside, the car is differentiated from standard models by lightweight front seats, which provide enhanced lateral support and feature an embossed SVR logo, and the addition of an SVR-branded steering wheel that has aluminium paddle shifters fitted behind it. Buyers can select four bespoke SVR interior colours, ranging from red to pale grey. The rear seats, meanwhile, are also heavily sculpted to hold occupants in place. Interior space and boot capacity remain unchanged. 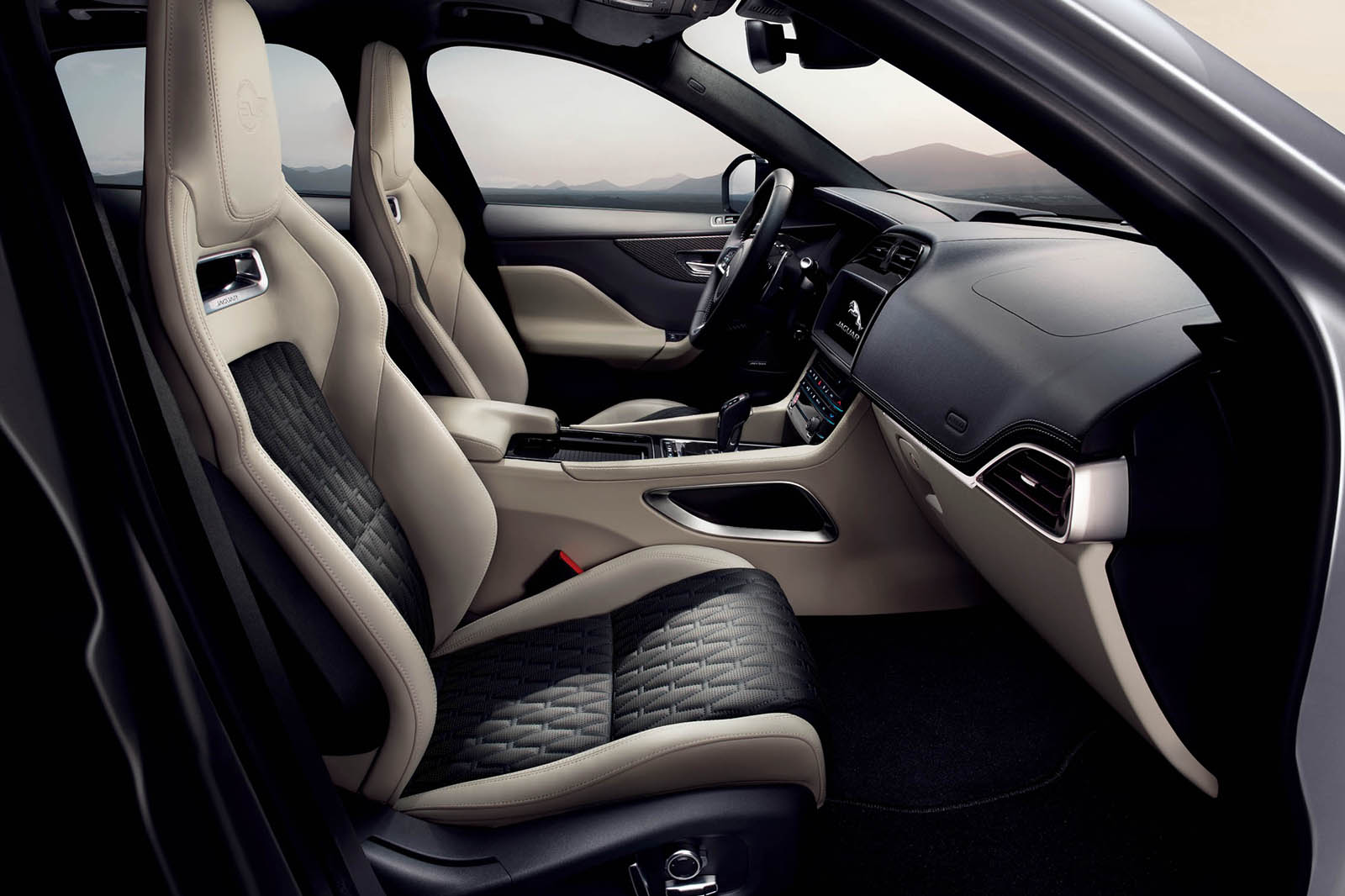 The arrival of the F-Pace SVR crowns the F-Pace range and underlines how quickly Jaguar has become a serious player in the burgeoning SUV market, despite only launching one in 2016. Last year, Jaguar sold 76,350 F-Paces globally, more than 50% higher than the total number of Jaguars it sold in 2011. The model also accounted for 42% of all Jaguar sales in 2017 and scooped the World Car of the Year and World Car Design of the Year awards, which are regarded as having a knock-on influence on opinions of the whole Jaguar range.

Intriguingly, Jaguar has described the F-Pace SVR as “the fastest and most powerful F-Pace yet”, suggesting that even quicker versions – perhaps in the vein of the Project 7 F-Type and Project 8 XE – could be possible.

To that end, Pook said: “You can always do more as an engineer. You’re always learning, doing more and getting better. It’s the natural way we move.” 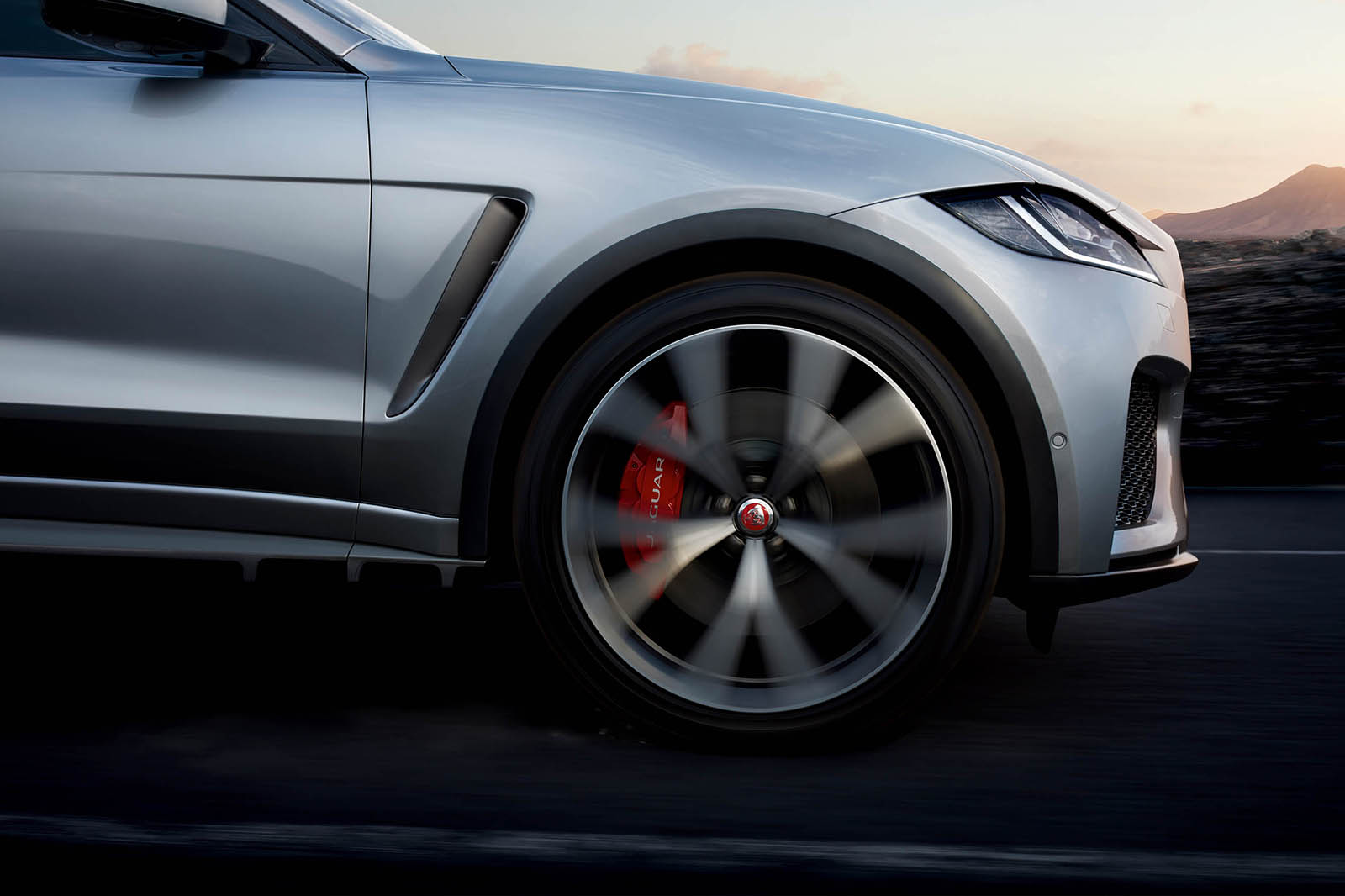 Opinion: why the Jaguar F-Pace, rather then the XE or XF, gets the SVR treatment

Can't help but smile at all these mad comments...

Unlike probably 99% of the posters, I have just driven this..

The interior was nice, not horrible.

The car though.. oh my what a machine. quiet when needed and gentle, comfortable and lovely.

Then you put your foot down. That V8 sound and the way it goes. Incredible. Order placed unhesitatingly. Way nicer and easier to place on the road than a sport SVR and such a character, pops and bangs and makes you laugh just driving it.

Yes, you can all say that the Alfa is better and the so and so is better built... I've driven all of them and Jaguar had my money instantly.

look below eye level and  and there is an abundance of cheap nasty plastics and on the cabriolet there are design flaws relating to the plastics used for window carrrier and  emergency boot releasee mechanism.Looked at anew Tiguan and not impressed with there interiot quality either ,at least most jags look better andnot bad quality but not Range Rover standards.