This might be the first-ever SUV to wear the coveted cloverleaf badge, but the Stelvio Quadrifoglio means something even greater for Alfa Romeo.

It’s the second stage of a momentous return to form, the exclamation point to follow the red-blooded Giulia Quadrifoglio saloon that reaffirmed the brand’s ability to produce true performance cars.

Both models share the same 2.9-litre, twin-turbocharged V6 engine and eight-speed automatic gearbox, but the Stelvio gets bespoke calibrations and ratios. In the saloon, all 503bhp was sent to the rear wheels, but here Alfa’s Q4 four-wheel drive system adds a second driven axle.

Up to half of the total 443lb of torque can be sent to the front - but only when the rear tyres begin to slip. Until that point, the car is entirely rear driven, with the rear differential’s pair of clutch packs splitting torque between the rear wheels. The combination unlocks truly eye-widening levels of performance.

We’ve experienced its potent combination of Ferrari-derived powerplant and class-leading handling twice before: first on the glass-smooth roads of Jebel Jais in the United Arab Emirates, and most recently on home soil, albeit as a left-hooker. This, then, is our first chance to try a right-hand-drive model on UK roads. 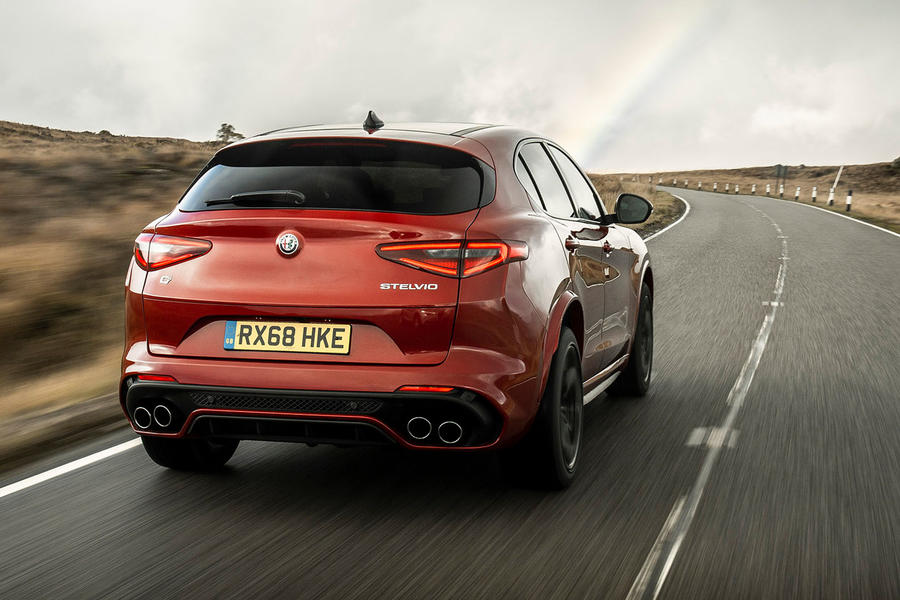 The Stelvio is every bit as aggressive and explosively powerful as its extended wheel arches, angular bonnet vents and enlarged quad tailpipes suggest, with an equally intoxicating soundtrack to match.

The Stelvio Quadrifoglio sounds mean enough in Dynamic mode, but the gloves come off completely when Alfa’s DNA drive modes are dialled up to Race: upshifts sound like gunshots and the engine truly roars, unlike many turbo units.

The performance figures are equally dramatic, dispatching the 0-62mph sprint in 3.8sec. Acceleration is almost violent at times, with a surprising lack of turbo lag that means the power is almost always available.

It’s not in its straight-line performance where the Quadrifoglio truly impresses, though. It has the poise and body control of a car that sits much closer to the ground, staying remarkably composed in bends and over the bumpy Scottish B-roads of our test route, so you can carry significant speed just about everywhere.

The steering is light and, with a short ratio, reacts immediately and precisely to your inputs. This matters most in Race mode, which disables all traction aids and can sometimes call for some opposite lock when the car reminds you of its rear-wheel bias.

UK roads reveal a secondary ride that’s understandably firm, but in normal mode, it can still absorb most imperfections without becoming crashy. Even in Dynamic mode, it takes some serious pushing before you find the limits of the damping.

Gearchanges from the giant, column-mounted paddle shifters are snappiest in Race mode, but although the eight-speed ’box is generally smooth when left to do its own thing, it can occasionally be caught out in normal mode and feel a little slow to downshift.

Having previously driven the Stelvio on winter tyres, we thought the standard-fit iron-cast brakes could bite a little higher in the pedal range. After experiencing the car on Pirelli P Zeros, they feel much more responsive. The optional carbon-ceramic brakes can still be unpredictable until you’ve brought them up to temperature, though, especially in stop-start traffic.

Our fully loaded test car also exchanged the standard leather front seats for a pair of carbonfibre-backed Sparco buckets. They do a great job of keeping driver and passenger in place and go a long way to giving the interior a sporting feel.

A surprising amount of road and wind noise creeps into the cabin, though, and overly glossy carbonfibre trim and some scratchy plastics beneath your eye line let the side down slightly.

Otherwise, cabin refinement is up to the class standard and the Quadrifoglio gets plenty of standard kit, including an 8.0in infotainment system with Apple CarPlay and Android Auto, a rear-view camera, front and rear parking sensors, an electric sunroof and 14-speaker Harman Kardon sound system. 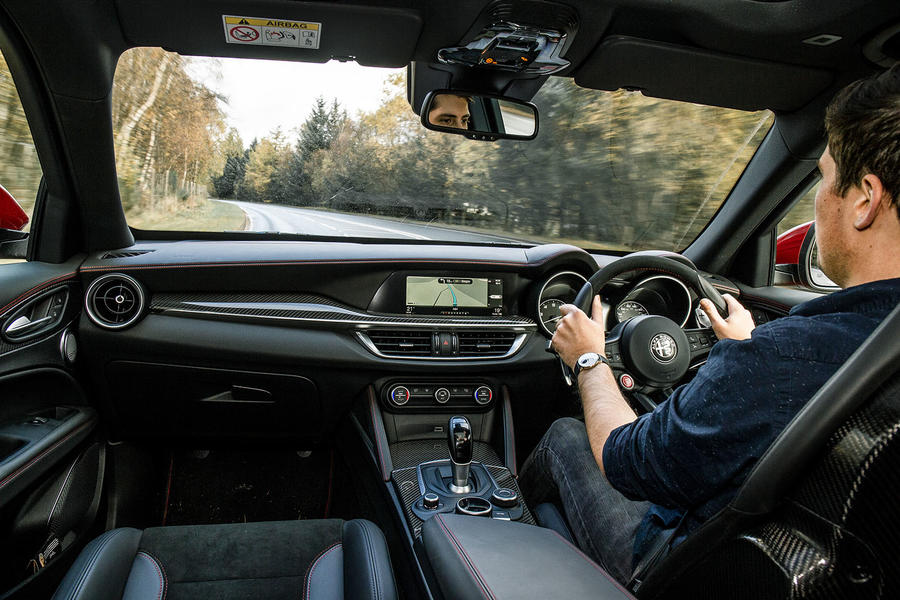 Although the decision to buy one will largely be made by your heart and not your head, this is comfortably the most engaging performance SUV money can buy.

Yes, the Giulia Quadrifoglio might be even more engaging, but when you're not flexing your right foot, the high driving position and practial hatchback add to the Stelvio's everyday appeal.

Interior plastics don’t quite gel with the asking price, especially compared with those of the German competition, but that doesn't make the Stelvio any less entertaining to drive. 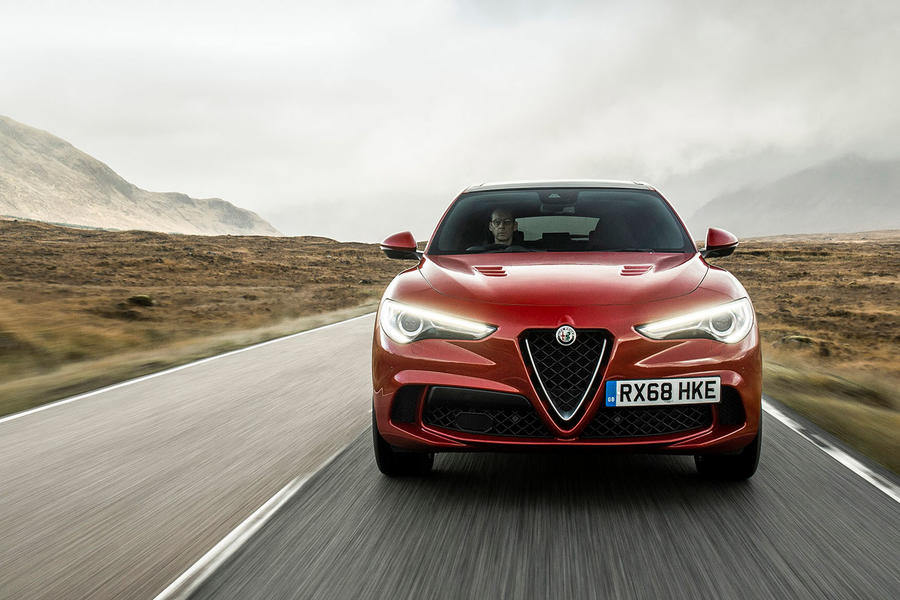 Not sure if racing Sparco buckets are the right choice for this sort of car.

Not sure if racing Sparco buckets are the right choice for this sort of car.

Thankfully they are an option. From what I have seen the standard seats look nice enough.

This car may drive very well

This car may drive very well but, let the Giulia, it's let down by its profile design.

Seen a few of the lesser-spec

Seen a few of the lesser-spec versions on the road..damn they look huuuge. Not sure the over-inflated 147 look works for me, but no denying this is a beast. Glad to see an Alfa with 4.5 stars too...