The Mercedes-AMG GLC S 63 is the three-pointed star’s most powerful mid-sized performance SUV yet. It joins the model line-up above the existing Mercedes-AMG GLC 43 and goes into battle against the Porsche Macan Turbo and BMW X3 M40i – with a raft of rivals from the likes of Jaguar and Alfa Romeo looming in 2018.

Available to order now with first right-hand-drive UK cars due for delivery next spring, the GLC 63 is available in a choice of two body styles and in two states of tune. There’s a coupé variant that carries with it a price premium of almost £2500 over the standard body shape. Meanwhile, the faster, more powerful S derivative of each body style costs £6750 more than the standard versions.

The GLC 43 is something of a halfway house between the standard Mercedes-Benz GLC model range and a full performance model out of AMG’s Affalterbach headquarters, but there are no such qualms with the GLC 63, which derives a lot of its technology from AMG’s staple models.

All the GLC 63 derivatives are equipped with the nine-speed automatic transmission that originally appeared in the Mercedes-AMG E 63, plus the latter car’s version of the 4Matic four-wheel-drive system. The new set-up uses an electro-mechanically controlled clutch to connect the permanently driven rear axle with the front axle and provide a fully variable apportioning of drive dependent on grip and traction.

The suspension has also been derived from proven AMG vehicles. The GLC 63’s system combines the four-link arrangement from the C 63 at the front with the multi-link set-up from the E 63 at the rear.

Another key element of the mechanical package is an AMG-tuned version of Mercedes-Benz’s three-chamber Air Body Control system, offering three levels of damping stiffness: Comfort, Sport and Sport Plus.

Providing additional configurability is Mercedes’ Dynamic Select system, which provides different driving modes that progressively stiffen the suspension, sharpen the steering, quicken the gearbox and turn up the noise. The modes are: Comfort, Eco, Sport, Sport Plus and Race, the latter being exclusive to the GLC 63 S models. If the idea of an Eco mode in a V8 performance car seems somewhat outlandish, it at least offers a token nod to fuel saving by implementing a coasting function that kills the engine at speeds between 37mph and 100mph under light throttle loads, reigniting it when you call upon the power once again.

Naturally, it’s possible to add further optional kit such as high-performance ceramic brakes (£4285) and an AMG performance exhaust (£1000). A £2755 Driver's Package, meanwhile, raises the restricted 155mph top speed of the GLC 63 Coupé to 167mph. The kit in question comes as standard on S variants, pushing the maximum to 174mph. On paper at least, that all sounds like enough to be getting on with… 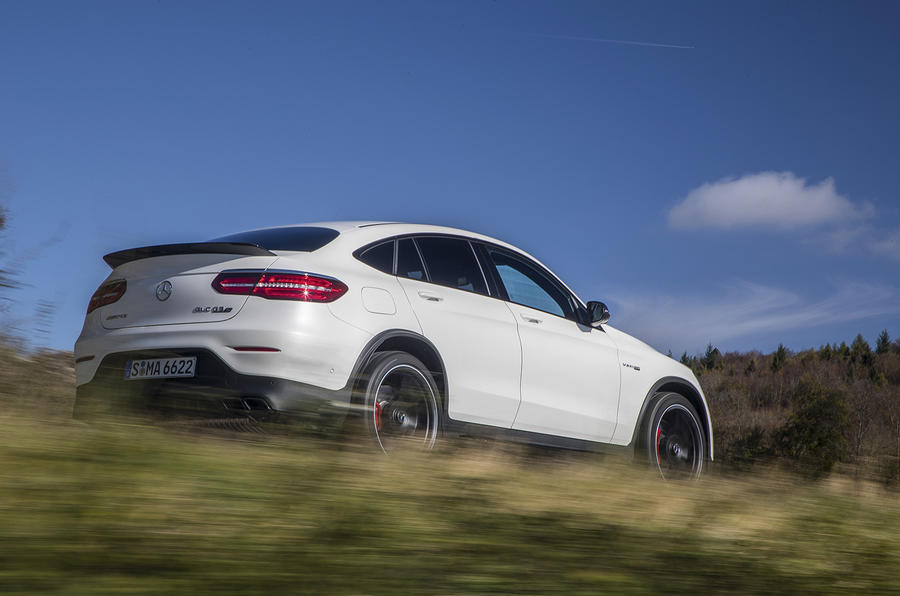 Of the four derivatives, we sampled the Mercedes-AMG GLC 63 S Coupé and one of the first striking things is how it sounds. Granted, it is fairly sober upon start-up in Comfort mode, but when the aggressive Sport Plus mode is engaged via the Dynamic Select rocker switch on the centre console and the optional sports exhaust is fully opened, the evocative, thunderous sound of old-school V8 iron makes the GLC 63 S Coupé sound like a Nascar. Whether you let the automatic transmission change cogs itself or use the steering-wheel-mounted paddles, each downshift is accompanied by a throaty bark and crackle on the overrun.

And, boy, does it feels quicker than a car of this heft should: the GLC 63 packs a powerful punch in any guise, but the S version produces 503bhp and 516lb ft (34bhp and 37b ft more than the standard car), performance that makes light work of the two-tonne weight to sprint from 0-62mph in an eye-widening 3.8sec. For comparison, Porsche claims a 0-62mph time of 4.4sec for the Macan Turbo equipped with the Performance Package, while the BMW X3 M40i hits 62mph from rest in a time of 4.8sec. The Merc’s performance feels as staggering as the raw figures look: find a straight stretch of road, mash the accelerator and the GLC 63 S Coupé squats at the rear and takes off up the road like a dragster.

The physics-defying performance is similarly impressive during cornering. Despite the overall weight and the V8 engine in its nose, the GLC 63 S Coupé’s body control is taut and composed in the more focused Sport and Sport Plus driving modes, and even dialling back to Comfort mode only adds a slight touch of wallow and lean through bends. All this doesn’t come at the expense of ride comfort, either, with the air springs doing a commendable job of soaking up road imperfections and maintaining a flat, roll-free attitude. Grip levels from the four-wheel-drive system are as every bit as impressive as you'd expect.

Its enormous capability doesn’t necessarily translate as pure driver reward in every aspect, though. The variable steering is accurate but through the thick, squidgy steering wheel it never provides the same feeling of an intimate connection with the road that a Macan Turbo’s would reward you with. There’s not quite the same level of fluid interaction; the Mercedes feels more like a point-and-squirt weapon that bludgeons the road into submission, rather than a vehicle that is constantly communicating with its driver through every twist and turn.

Additionally, what makes for a jaw-dropping performance vehicle on fairly well-kept German roads might not be quite as suitable for UK highways and byways. Although very few prospective GLC 63 Coupé buyers are likely to put practicality at the top of their considerations, we can think of few big cars on sale today that offer such a laughably poor rearward vision. Also take into account the wide tracks, the flared body styling and those sizeable wheels and rims (our test car rode on optional 21in alloys), and the GLC 63 Coupé can feel dauntingly cumbersome around town. 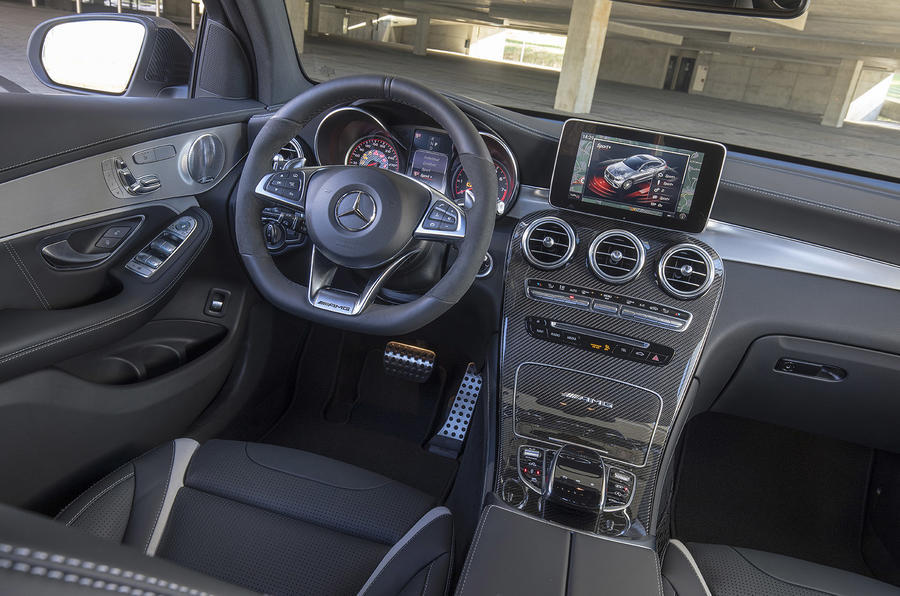 As intoxicating and hugely entertaining as that V8 engine feels and sounds, it's hard to make a case to wholeheartedly recommend the GLC 63 Coupé over its five-door sibling unless you’re smitten by the swoopy, but divisive, styling. From a practical perspective, you pay £2500 more than Mercedes UK charges for the five-door GLC 63 to get less interior room and less load-lugging capability.

Set that aside and the GLC 63 Coupé makes for a decadent, if faintly ludicrous, modern-day hot rod. It’s packed with the quality you’d expect from Mercedes-AMG, with one of the most luxurious and comfortable cabins on the market, a long list of performance-oriented kit, and all the connectivity and driver aids you’d expect on a cutting-edge vehicle at a premium price point.

There comes a point when the rewards of ever-quicker acceleration become infinitesimal, and whether that half-second 0-62mph advantage over rivals such as the cheaper Macan Turbo is of more importance than the latter’s marginal handling superiority will depend largely on whether you value having the final word in raw pace over a vehicle with talents that are exploitable more of the time.

But for the way that it seemingly defies the laws of physics by being capable of shifting more than two tonnes at a mind-bending pace, and for retaining an evocative petrol V8 in a mid-sized performance SUV when some rivals have turned to six-pots, the GLC 63 Coupé deserves commendation, on the evidence of this test at least. 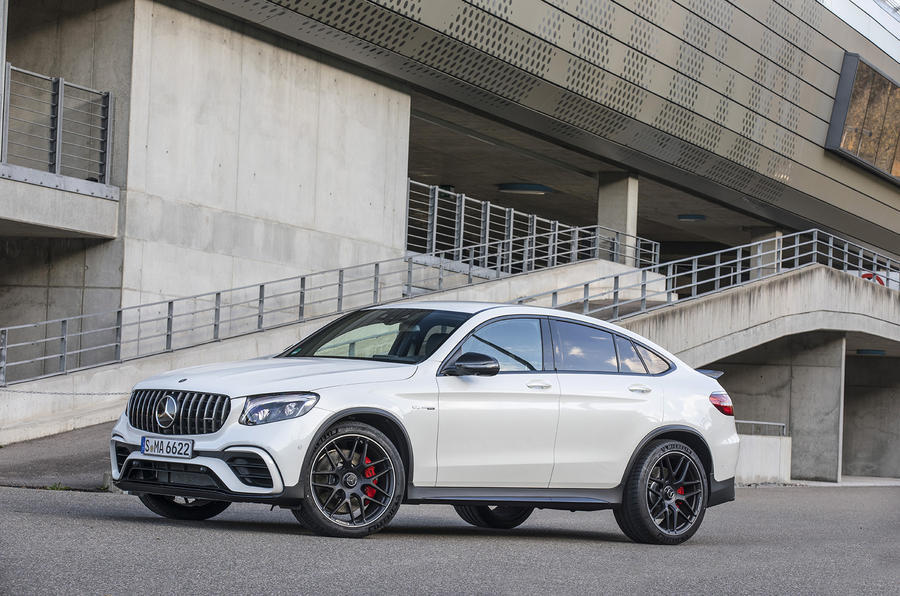 The mercedes is on of the best brand among all car brand all over the world amg is another great addition in the mercedes car collection this car have great design and features its engine is also great i hope it will not get by a .