BACK TO ALL NEWS
Currently reading: Audi designers pushing 764bhp PB18 e-tron supercar for production
UP NEXT
New 2026 Polestar 6 confirmed as 874bhp evolution of O2 concept

Audi’s designers are pushing the company to make a production version of the PB 18 e-tron electric supercar concept first seen at the Pebble Beach show earlier this year.

The rakish coupé was revealed at the 2018 Pebble Beach Concours d'Elegance (hence the PB18 name) and is currently on display at the Los Angeles motor show. It previews the firm's plans for a new headlining electric supercar, tipped as a replacement for the second-generation Audi R8.

Speaking at the LA show, Audi exterior design chief Andreas Mindt says the design team are “absolutely pushing” the car for production, and were the “engine” in the company driving for it to be built.

However, the highly complex nature of the concept car means it’s not a simple decision as a simple yes or no on the 764bhp machine making production.

To preserve the concept’s central driving position, for example, Audi would need to develop a new drive-by-wire steering system, a huge cost in such a low volume car.

Cooling such a car also makes for a big engineering challenge, with Mindt dismissing it as a myth that electric cars didn’t need significant cooling systems.

The PB 18 e-tron was created in a joint design and engineering programme between the newly established Audi Design Loft in Malibu, California, and Audi Sport in Neckarsulm, Germany, in what is billed as a vision for the “high-performance supercar of tomorrow”.

As well as providing a pointer to how Audi envisages its supercar of the future will look, the car hints at plans by the brand to adopt the latest in solid-state battery technology as a means to radically reduce weight and improve the packaging of its upcoming e-tron models. Together with a body constructed of aluminium, carbonfibre and plastic composite materials, the four-wheel-drive PB18 e-tron is claimed to weigh less than 1550kg.

Mindt added that he believes the future of supercars to be electric, and thinks they have great potential for racing, too 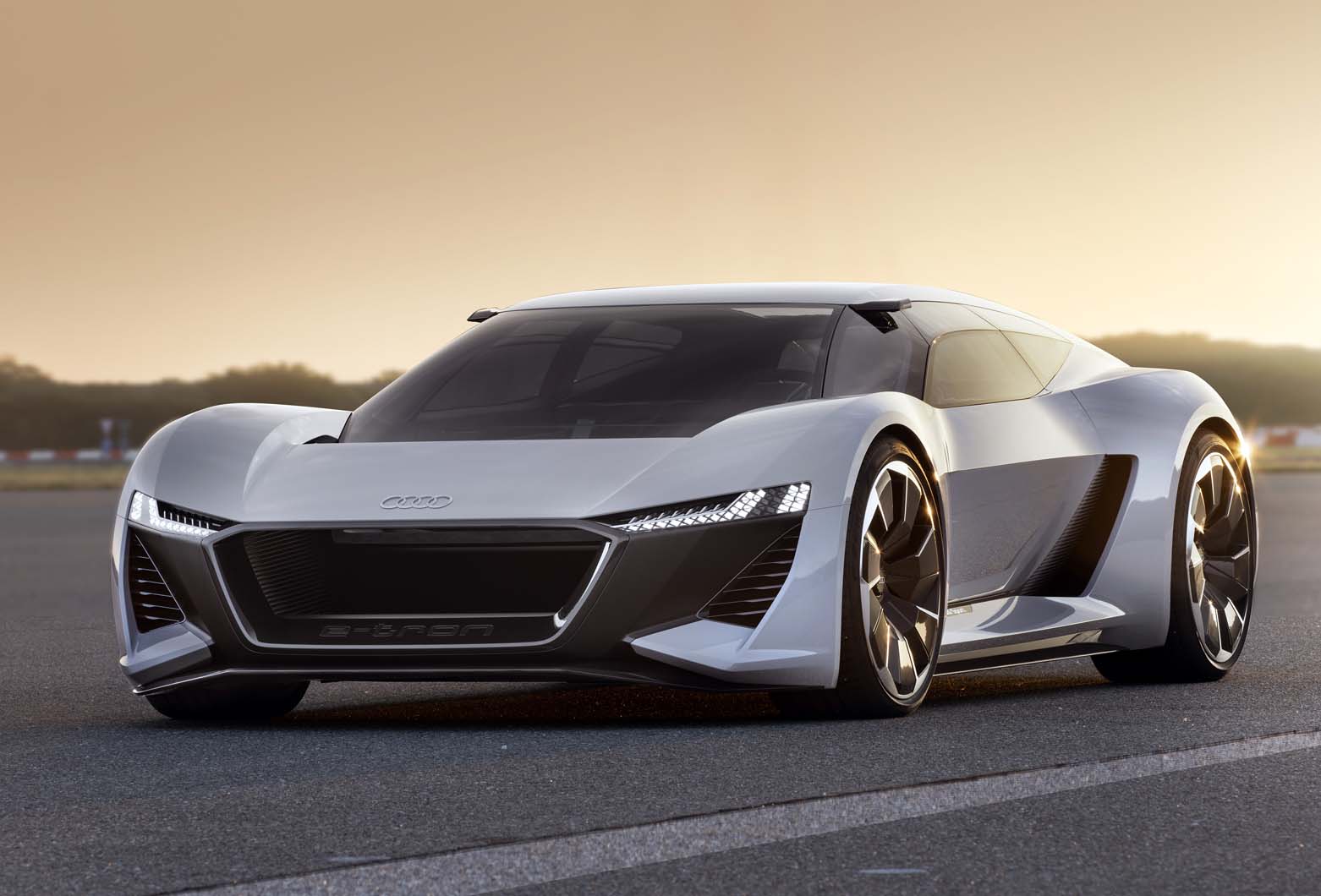 The PB18 e-tron draws on the styling lineage first established on the Audi Aicon concept revealed at the 2017 Frankfurt motor show, albeit with a more dramatic cab-forward silhouette. An extended cockpit incorporates tapered rear side windows and a large rear window that together hint at the look of a modern-day shooting brake.

Key elements within the design include a heavily structured front end featuring a bold hexagon-shaped grille and large air ducts, as well as thin ‘laser’ headlights and a prominent splitter designed to direct air evenly across a flat undertray.

Further back, the PB18 e-tron has large front wheel arches, ultra wide sills and cooling ducts within the leading edge of the rear wheels. The wide track stance is further emphasised by large, 22in wheels, each featuring eight asymmetric spokes intended to resemble turbine inlets, and shod with 275/35-profile front and 35/30-profile rear tyres.

The rear is dominated by an adjustable spoiler element, a full-width light bar and a high-mounted diffuser that can be adjusted downward to increase downforce.

Developed under the working title Level Zero, the PB18 e-tron eschews all of the autonomous driving functions featured on recent Audi concept cars for a more purist approach that aims to place the driver in the thick of the action. 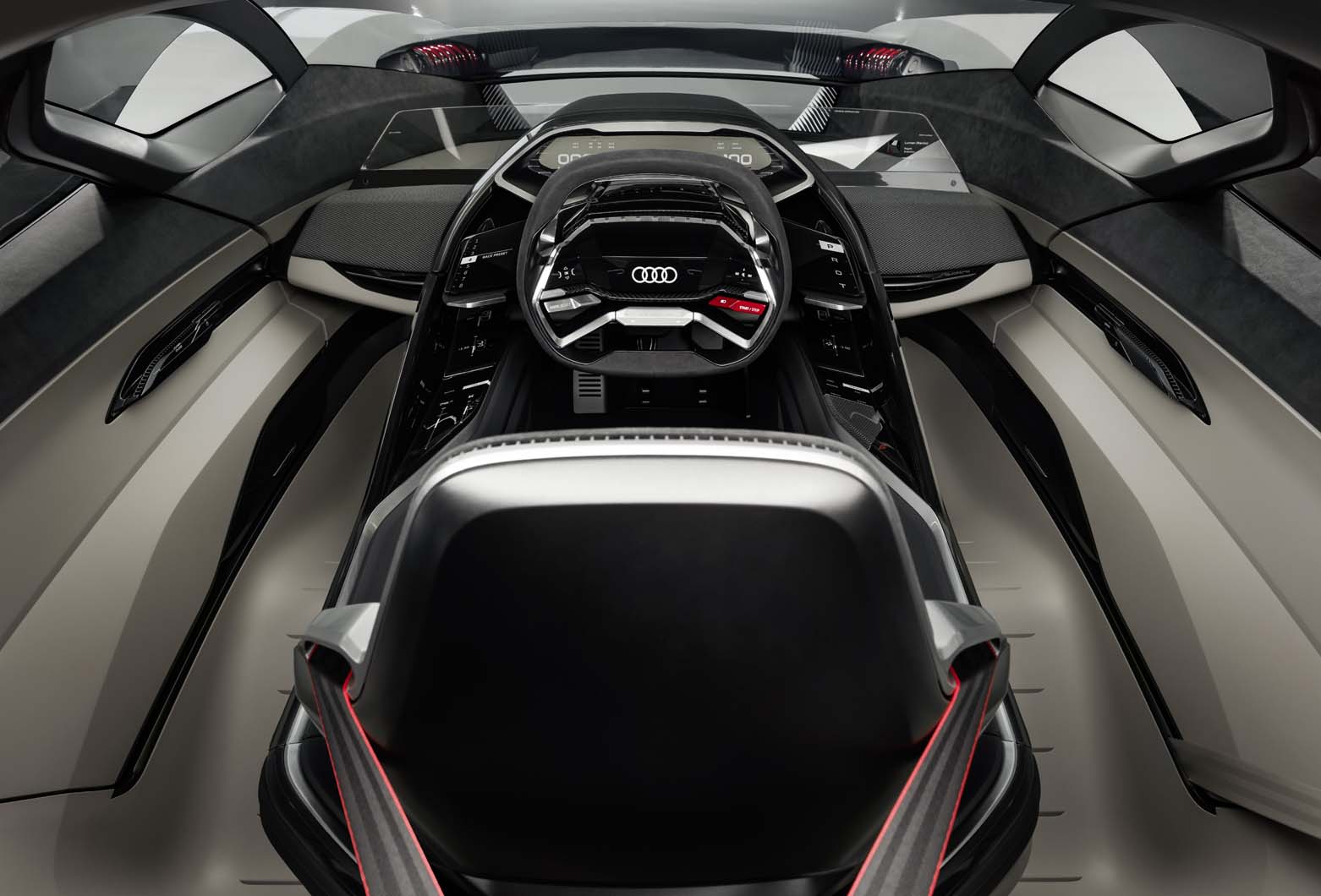 The adoption of fully electronic steering, throttle and brake functions has allowed Audi to provide its latest concept with a variable cockpit design that allows the driver’s seat and dashboard to be positioned in two ways: either to the left of the interior, as in a typical road car, or in the centre, as in a traditional race car.

Audi says the idea for the unique variable cockpit design was inspired, in part, by the layout of its Le Mans-winning R18 e-tron quattro LMP1 race car. It allows the driver to choose between a central driving position when driving alone or a conventional one to provide space for a passenger.

“We want to offer the driver an experience that is otherwise available only in a racing car like the Audi R18,” said Gael Buzyn, head of the Audi Design Loft. “That’s why we developed the interior around the ideal driver’s position in the centre. Nevertheless, our aim was to also give the PB18 e-tron a high degree of everyday usability, not just for the driver, but also for a potential passenger.” 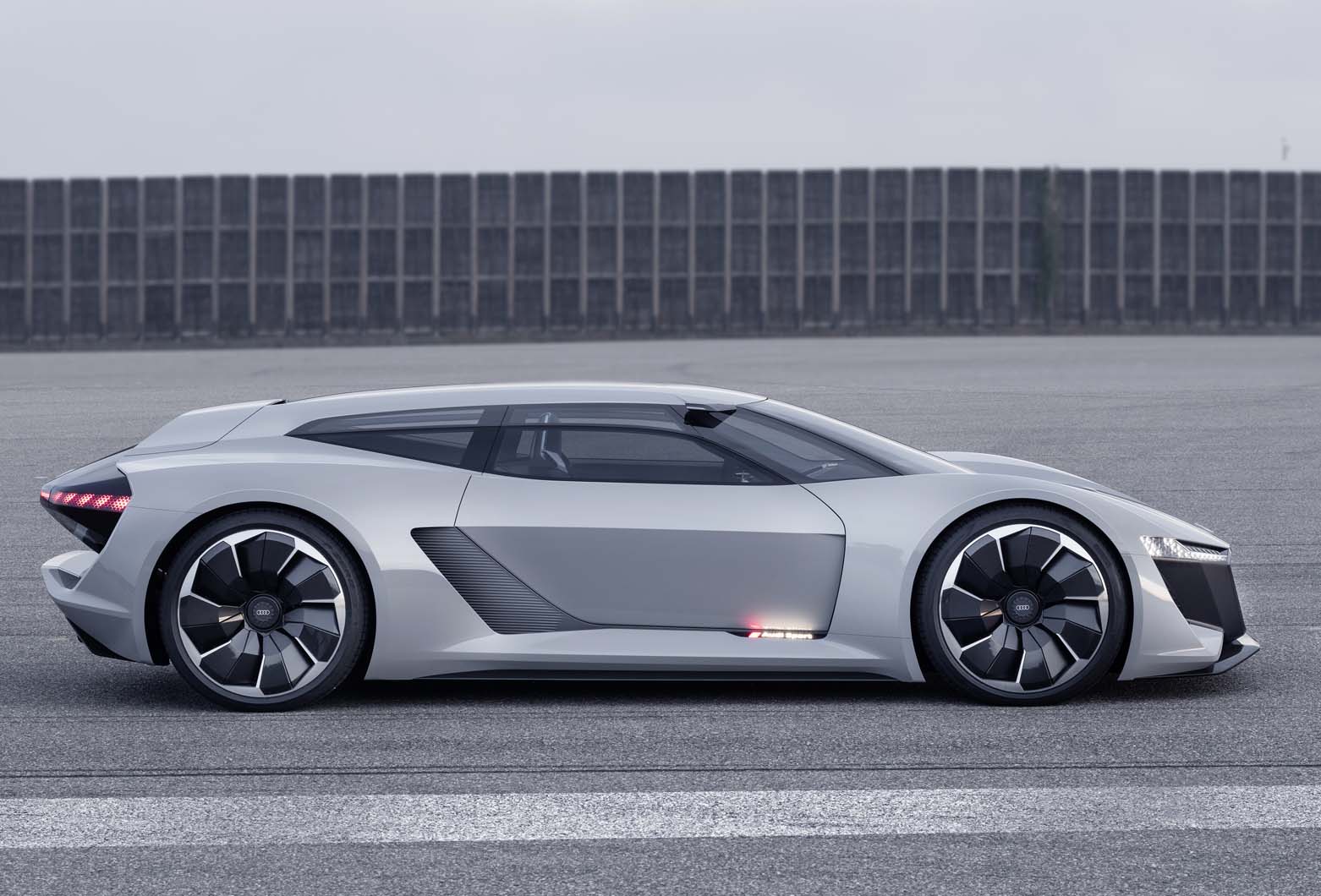 The adoption of the shooting brake-like rear end and lack of complex drivetrain hardware at the rear underscores Audi’s desire for everyday usability, resulting in a boot that provides 470 litres of luggage space.

The PB18 e-tron is powered by a trio of electric motors – one mounted within the front axle delivering 201bhp and two sited within the rear axle producing 234bhp each.

The combined system output is 671bhp, although a boost function has been conceived to allow the driver to call up 764bhp for brief periods of full-throttle acceleration, giving the car an ultimate power-to-weight ratio of 509bhp per tonne. Torque peaks at 612lb ft.

In comparison, the most powerful R8 variant runs a naturally aspirated 5.2-litre petrol V10 engine with 602bhp and 413lb ft.

The heady reserves combine with four-wheel-drive traction to provide the PB18 e-tron with a theoretical 0-62mph time of “scarcely more than two seconds”. Audi hasn't quoted a top speed yet, although it has confirmed that the car is good for speeds of more than 186mph, depending on range. 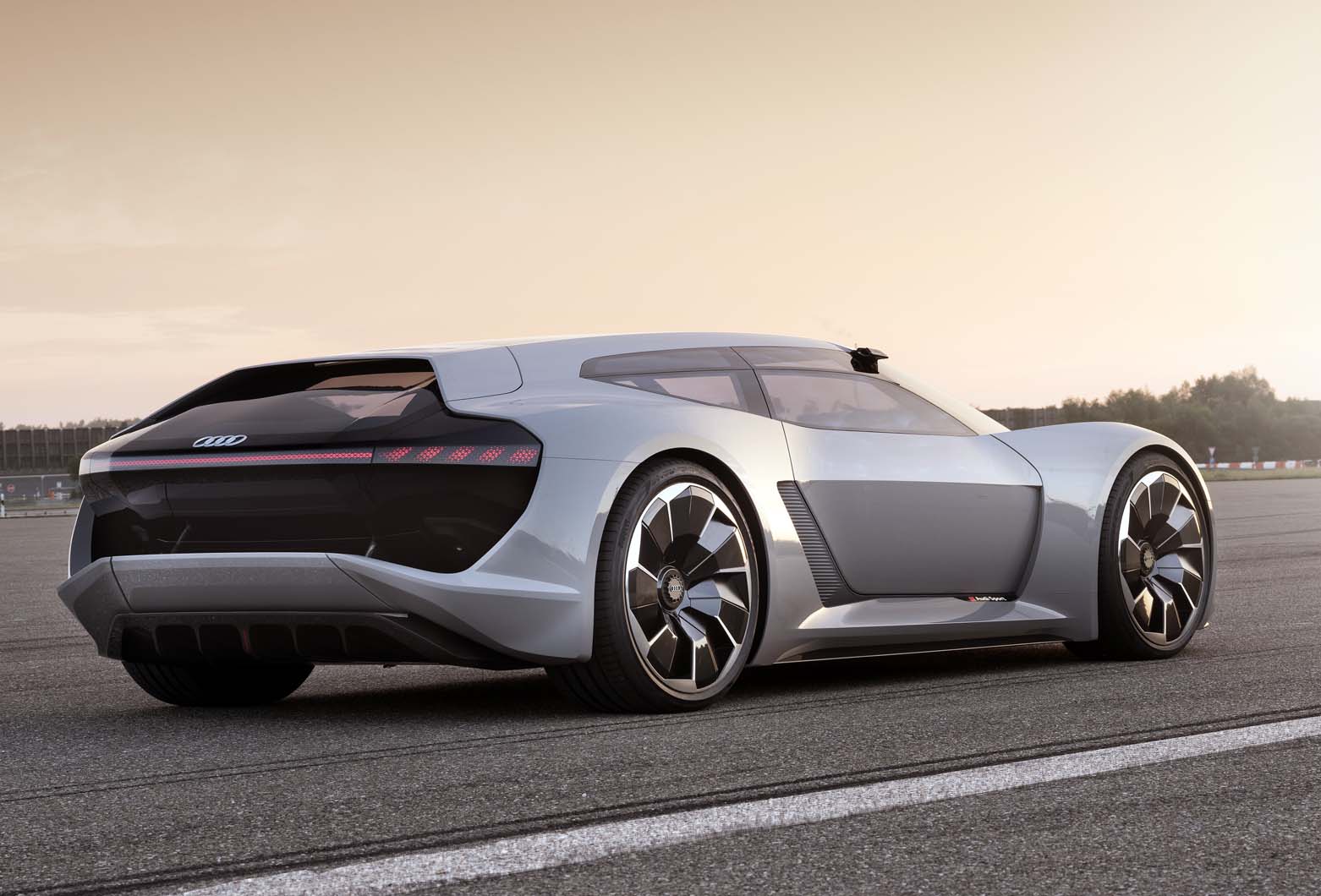 Audi claims significant efficiency gains with its latest electric driveline through the adoption of a new regenerative braking system. It also says the cab-forward design of the PB18 e-tron serves to provide it with a centre of gravity located behind the seats, in a position similar to today’s R8.

Energy for the concept's three motors is provided by a liquid-cooled solid-state battery with a capacity of 95kWh. Mounted underneath the boot, this is claimed to provide a maximum range of up to 311 miles on the latest WLTP cycle.

With 800V compatibility, the PB18 e-tron’s battery can be fully recharged in around 15 minutes, Audi claims. Alternatively, it can be charged wirelessly via induction.

Drawing a link to Audi's motorsport activities, the PB18 e-tron uses a suspension system inspired by the R18 e-tron quattro LMP1 racer, with independent lower and upper transverse control arms, a pushrod system up front and a pullrod arrangement at the rear, while each end is fitted with variable magnetic ride dampers.

We read "...a more purist approach that aims to put the driver in the thick of the action" and we also read "...fully electronic steering, throttle and brake functions".  What action?  Sit there while it does its party trick of whirring to high speeds in very short order.  Environmental pressures may be forcing the industry in this direction but don't lie about what we are losing: actual driver involvement, more of which is to be found in any number of cars than this Audi will ever provide.

It really looks great, but, we all know that most of it won’t see the Road as is which is a shame.