From £60,1258
A comprehensive rework of the X5 has produced a more capable, convenient, refined and classy SUV that’s a more satisfying drive, despite an occasionally crashy ride
Open gallery
Close

Over 2.2 million BMW X5s since its first SUV appeared in 1998, the BMW  we sample here the latest, fourth-generation iteration of this highly successful model.

Almost everything is new. According to project leader Johann Kisstler, a man with 40 years-worth of experience developing BMWs, there were three broad development goals for this latest X5. First, to offer a genuinely sporting drive, as implied by the BMW badge, and to combine this with real comfort and considerable off-road capability.

Second was refinement, and not merely aural. ‘The X5 is one of our most expensive cars, and the most in demand,’ explains Kisstler. ‘It needs to create a strong premium impression through the quality of materials and the standards of finish.’ Put another way, the X5 is a BMW calling card, and it needs to leave a good impression. Third on the hit-list was ‘a high-level of driver assistance, but without making a computer on wheels.’

These aims have been targeted within the envelope of a noticeably bigger X5, which has put on girth (up 66mm), length (36mm) and height (19mm). This is not about physically distancing the X5 from its X model siblings but about safety and packaging, says Kisstler. The desire to install three child seats across the bank bench and pass the stringent pole crash test demanded more shoulder width, while the 42mm wheelbase stretch added cabin space.

A higher aluminium content – all the body’s hinged panels, the front wings and some core structure – allows the new X5 to maintain much the same weight on an equivalent equipment basis, says Kisstler, adding that the X5’s high production volumes preclude the use of carbonfibre, as employed on the BMW 7 Series.

Even the carry-over engines have been substantially reworked to meet the demands both of the new Worldwide harmonised Light vehicle Test Procedure, and the Real Driving Emissions. At launch BMW will offer three engines, starting with the 261bhp 3.0 litre 30d. It’s a straight six rather than the previous four because that’s how they like ‘em in America, and it’s expected to take 65 percent of UK sales.

For slightly more money comes the 335bhp 3.0 40i, also a six, while the current top-of-the-range powertrain is a 395bhp diesel, the M50d’s sextet of cylinders boosted by no less than four turbochargers. A V8 50i, and a plug-in hybrid, follow within a year. Although these engines are broadly carry-over, powertrain boss Reinhardt Brandstatter says that ensuring they perform well in the WLTP and RDE tests, deliver improved real-world fuel consumption and good driveability was ‘challenging’.

The 40i’s cylinder head has been redesigned for 350 bar injection pressures and now features a particulate filter, intelligent cooling and a friction-reducing single row timing chain. It’s now almost six kg lighter, too. The 30d has also been reworked, if less extensively, its exhaustings processed by a suite of catalysts and AdBlue treatment. 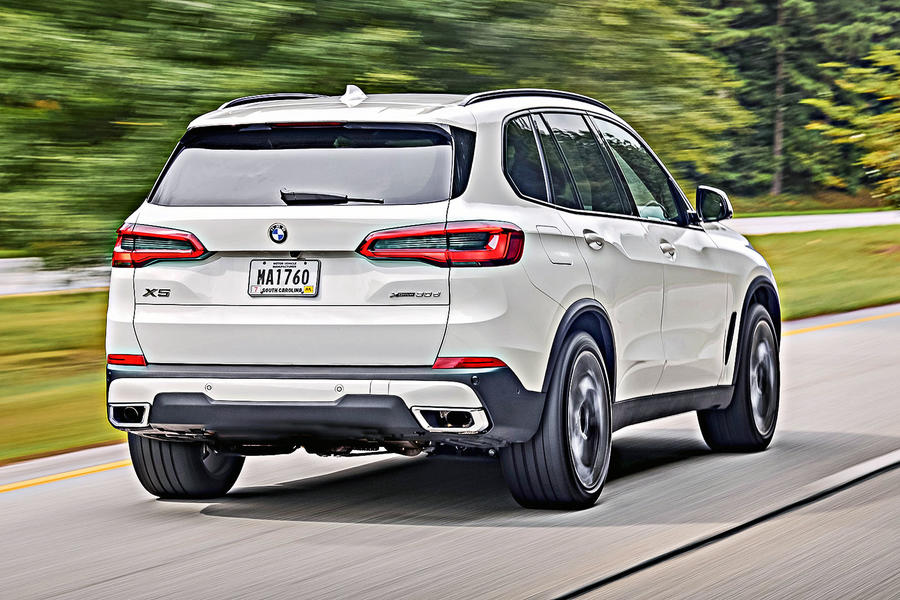 You won’t immediately notice too much that’s radical when you climb inside, until little details impinge. The instruments are now digital, the scales of the speedometer and rev counter corralled into slightly odd shapes at the display’s extremities and if it’s a heavily optioned X5, as these were, you’ll soon spy the glitzy, Volvo-channelling crystal gearlever knob.

If you’ve recently sampled the frustratingly unhelpful twin control screens of the latest Audi and Range Rover products, you may well rejoice at the deployment of a far more intelligible single 12.3in screen and a physical I-Drive controller.

There’s a slightly busier head-up display, heated and cooled cupholders, a thump-tastic 1500 watt Harmon Kardon stereo, laser headlights (they double the beam-length of conventional headlamps, for a lighthouse-like range) and a suite of connectivity options that includes Microsoft Office 365 and perhaps riskily, the possibility of using your smartphone as the car’s keys.

There are many more neat details. When off-roading, you can see video images of each individual X5 wheel on the infotainment screen, as if you were viewing them from outside. So if you’re about to drive off the edge of a ledge, into a modest boulder or over a tree root, you can see it.

To ease the scramble into the optional sixth and seventh seats, a section of the middle row motors forward and then tilts upwards, towards the headlining, at the single stab of a button. And pressing a button in the top edge of the lower tailgate drops the entire rear end of the X5 by 40mm, to help you load it.

At heart, though, this is still an X5, the driving position as familiar as the quietly luxuriant logic of the cabin. BMW’s refinement quest is immediately apparent in the diesel’s subdued idle, its efforts barely audible if you let the transmission have its perceptive, unobtrusive way.

Unlike some post-WLTP models, notably the Volkswagen Touareg 3.0 TDI, this is a car whose driveability remains seamless. Also barely noticeable is the X5’s DERV-conserving freewheel facility, your clocking of the driveline’s re-engagement more likely to be spotted via the rev counter than a shuddering driveline.

It’s not all brilliant, though. Flat-out, the X5 doesn’t feel as fast as the claimed 6.5sec to 62mph time implies, and if you shift manually you’ll uncover some sub-2000rpm lag. In sport mode, which enlivens the driveline pretty effectively, the loudspeaker-delivered sports diesel soundtrack can turn a little wearing, too.

Dynamically, though, it’s not inappropriate backing. The test route included long sections of tight, twisting country road better suited to a Mazda MX-5 than an SUV, and once you’re used to the quickened rack of the (optional) Integral Active Steering you discover prodigious grip, excellent body control and an impressive resistance to understeer for a vehicle topping two-and-a-fifth tonnes.

You can even feel what the front wheels are doing. What spoils it, slightly, is that the Active Steering’s swivelling of the rear wheels (useful in city manoeuvres) is continuously variable in sport mode, lending a hard-pushed X5 a slightly inconsistent feel at the wheel.

Few will push this big SUV so hard of course, but rear-steer quirks aside there’s no question that BMW has delivered more of a driver’s X5. It’s also very capable off-road, a mix of high torque, versatile suspension and trick algorithms likely to keep you moving along most tracks. It’s still more entertaining as the petrol 40i, the six delivering deliciously cultured sounds and a lightly electrifying gear-shift blat at full revs. It’s also a restfully quiet cruiser.

Mildly disappointing are the big 20in wheels’ pothole assaults (these are single chamber air springs, rather than the more absorbent multi-chamber variety), but this big BMW’s primary ride is excellent. So is its accommodation – you’d hope for nothing less in a vehicle this big – though Chinese buyers will doubtless consider the slightly constrained rear legroom ego-dentingly limited. 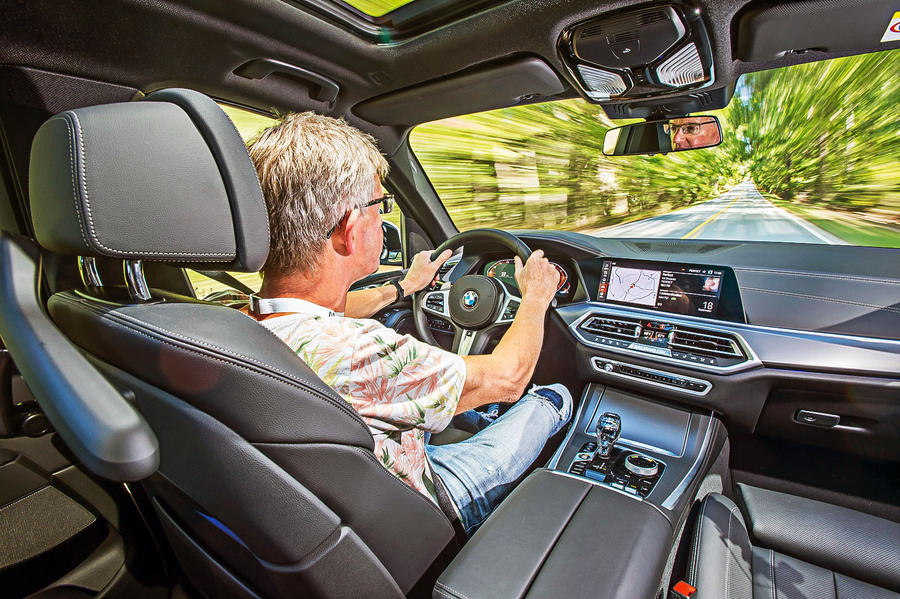 The X5’s flaws are nevertheless small.

This bulwark of BMW’s highly successful X model range is an impressively complete and satisfying family transport device both on road and off, and a more subtly accomplished machine than implied by its oversized new grille.

It has to now be a contender for luxury SUV best-in-class. 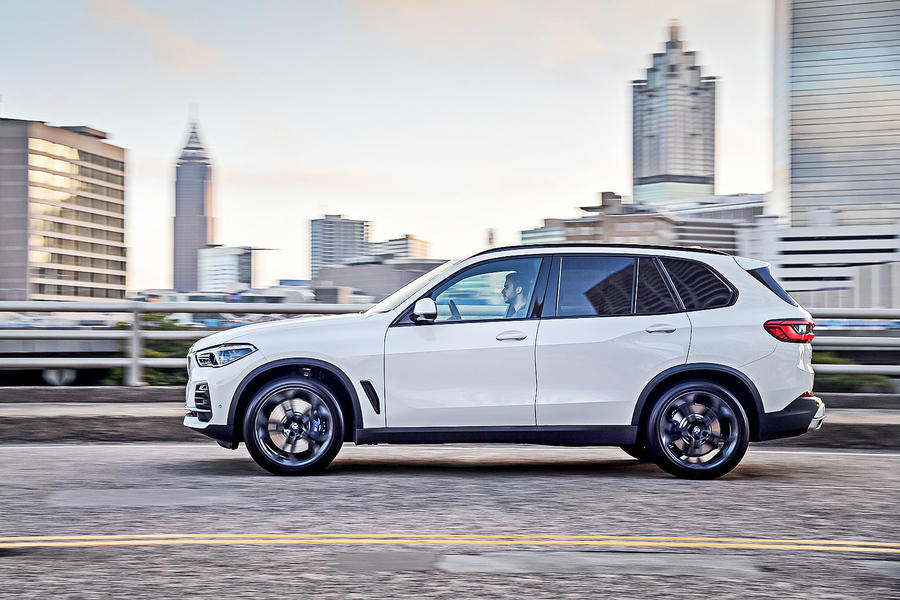 Having been in the old one it feels more than wide enough already and there's good width in the back so we don't need it to be wiser still.
The existing version has a good ride in the front but on country roads the ride in the back is very bouncy. Passengers (me included) complained of feeling woozy in the back of this but were perfectly fine on the same roads in my 11 year old Mazda 3! So have they improved the rear suspension? The 3.0 6 cylinder diesel is nice and not that much thruster than 2.0 4s in a car this size.
NoPasaran 28 September 2018

Just what is needed

I would like to ask "Can it become even more ridiculous?" in a joking way but the joke will be on me, because it can and it will.

I hate BMW's at the moment

I hate BMW's at the moment and certainly this. You haven't "made it" because you have one of these so lose the attitude, please. And looks like BMW have been copying a few things from Audi on the interior. Quelle surprise! Overpriced and tedious, just like most BM cars.