BACK TO ALL NEWS
Currently reading: New Mazda CX-5 on sale this June priced from £23,695
UP NEXT
GSR2: The new rules making cars safer but more expensive

That starting price makes the second-generation model £500 more than the equivalent current generation model, but the latest car gets a bolstered list of standard features and striking design both inside and out.

The Sport Nav starts at £26,695 and extends the specs list with 19in alloys, heated front seats, a 10-speaker Bose sound system and keyless entry, among other things.

First revealed at the Los Angeles motor show in November, the new CX-5 comes as Mazda looks to continue its global momentum, spurred on by the popularity of SUVs. 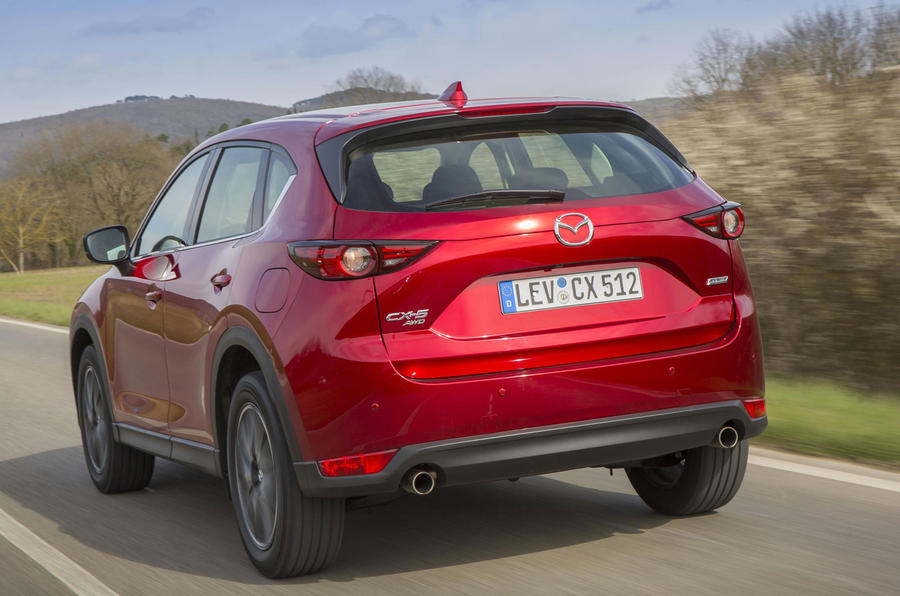 The manufacturer says the all-new CX-5 will kick-start a fresh era for its line-up, where passenger enjoyment is as important as driving pleasure and simplistic Japanese design helps it to stand out among rivals.

In Europe, the new CX-5 enters a congested segment dominated by models such as the Nissan Qashqai and Kia Sportage, but it does so as a more premium offering so ranks alongside the Volkswagen Tiguan and Ford Kuga.

The new car's design takes heavy inspiration from the larger, US-focused CX-9. Its sleek headlights are split by a wide-mouth grille and sit above a cleanly designed bumper, but bulky wheel arches and tall doors give the car the more rugged look of a proper SUV. The wheelbase is unchanged in the new CX-5, at 2700mm long, but shorter overhangs have cut the overall length by 5mm. 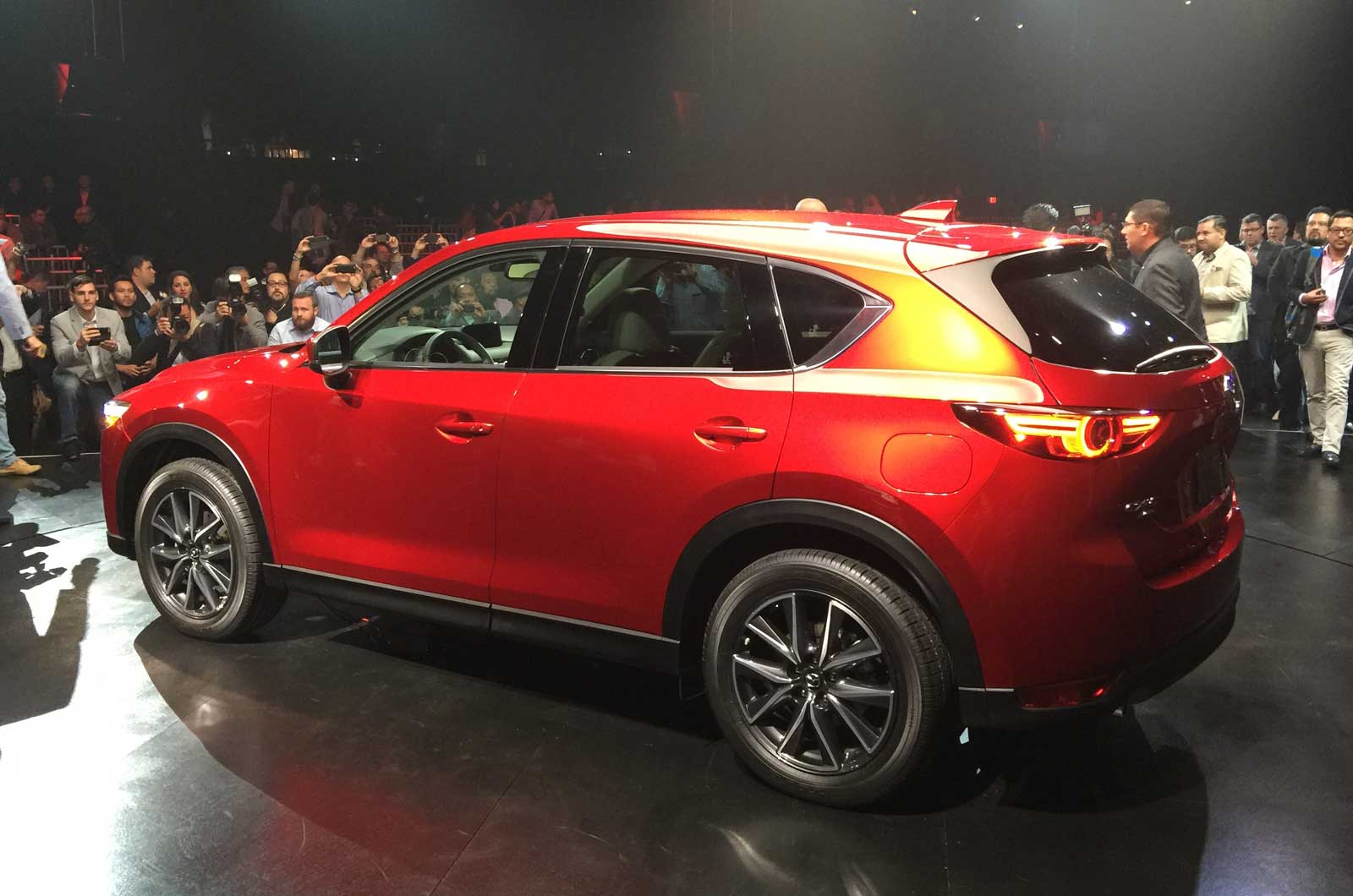 Compared with the outgoing CX-5, the new model sits lower and is 10mm wider at the front, creating a more sporting stance. This is combined with improved visibility for front occupants, with a wider field of view for front-seat occupants thanks to the A-pillars having been moved back by 35mm.

The cabin has been designed with a driver-centric focus and uses familiar Mazda features such as a three-spoke steering wheel and clutterfree dashboard design topped by a 7.0in display. This is accompanied by a 4.6in highresolution TFT display in the instrument panel and head-up display on the windscreen.

Mazda’s MZD connected technology enables users to link the infotainment system with their smartphones and other mobile devices. Handsfree phone operation, Harman cloud-based technology and SD-card-based sat-nav are all included. The CX-5 also gets a 10-speaker Bose sound system with ambient noise technology that improves audio quality while on the move. 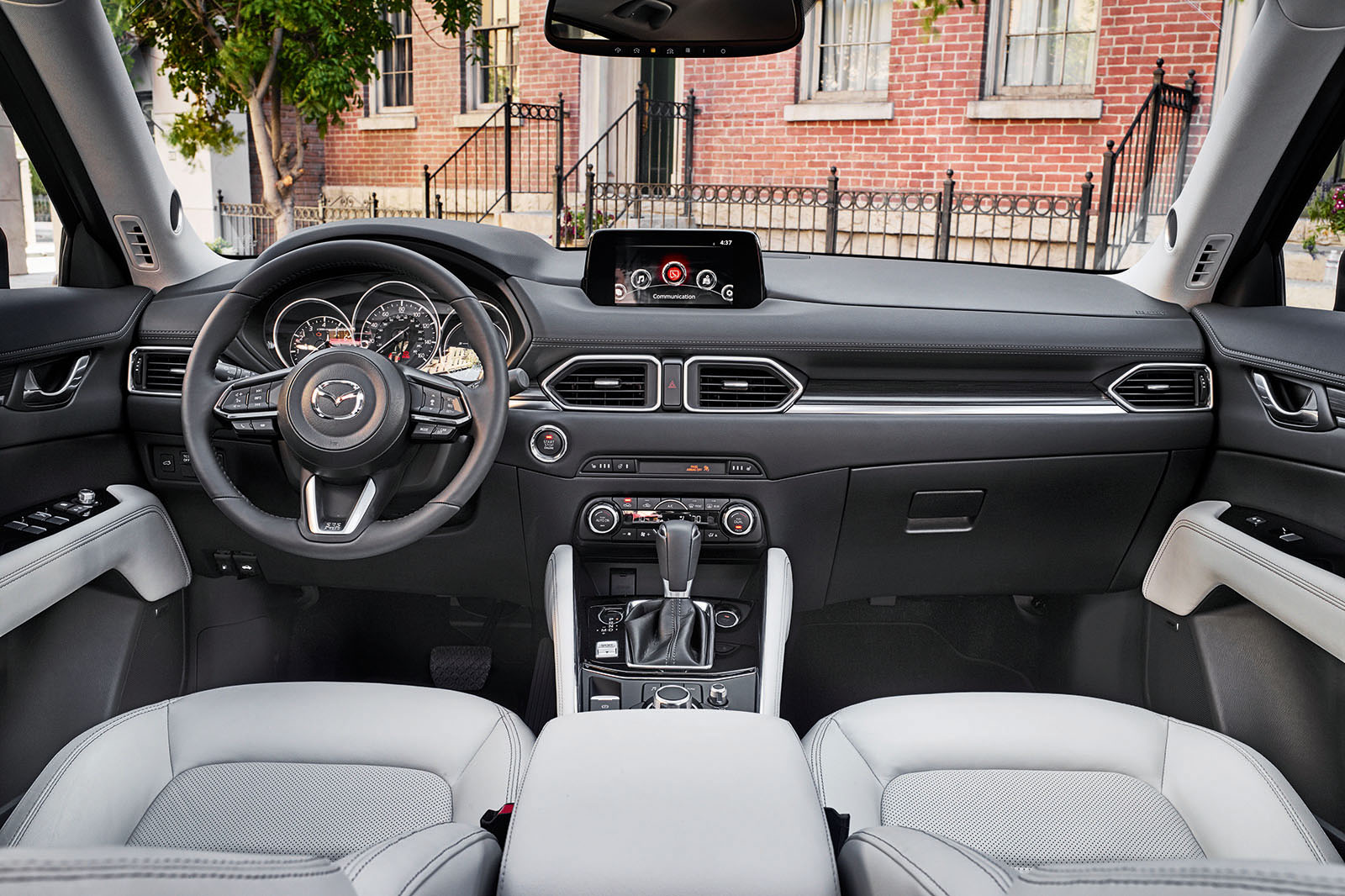 In the pursuit of a more comfortable driving experience, the base of the centre console has been raised compared with its predecessor, lifting the automatic gear selector by 60mm and manual gearlever by 40mm. The 2017 car also introduces a new twostep reclining mechanism on its rear bench and uses more shapely cushions for its seats in a bid to provide better support.

The CX-5 retains the engine line-up of its predecessor, which in the UK is made up of a 2.2-litre Skyactiv-D diesel and 2.0-litre Skyactiv-G petrol motor. The diesel CX-5 has 163bhp and, while not confirmed, is expected to have a combined fuel economy of 61.4mpg like the outgoing car. The petrol model’s figures are 173bhp and a predicted 47.1mpg.

In the US, the CX-5 will also be available with a 2.5-litre petrol engine carried over from the outgoing car. This unit will not be sold in the UK.

Six-speed manual and six-speed automatic gearboxes are offered. Drive is sent to the front wheels as standard, with Mazda’s i-Active all-wheel drive system available as an option.

The CX-5 will also have Mazda’s new comfort-improving technology called G-Vectoring Control (GVC). This system adjusts engine torque in response to steering angle to optimise the vertical load on each wheel, reducing the amount of movement experienced in the cabin and lessening the need for the driver to make steering corrections. 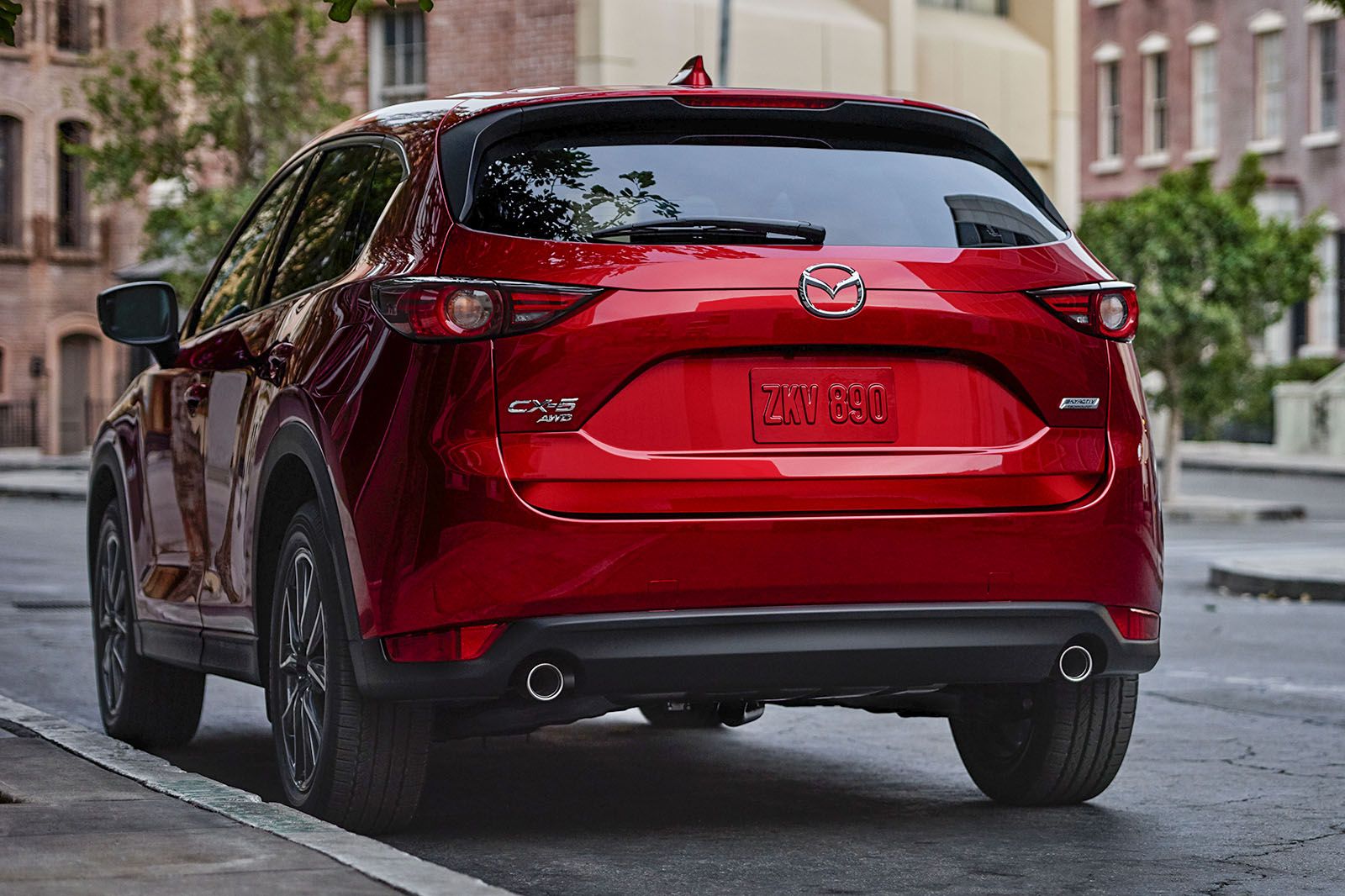 The CX-5 gets MacPherson strut front and multi-link rear suspension, with enlarged diameters for the front damper pistons to help reduce body roll and give a smoother ride.

The body structure is 16% stiffer than the old CX-5’s, partly due to the use of more rigid steel in the A-pillars and side sills. Mazda also says improvements to the structure and aerodynamics have reduced road noise by an average of 1.3dB at 62mph.

Safety features include both passive and active systems, combined within Mazda’s i-Activsense technology. It incorporates driver assist features such as radar cruise control, which can bring the CX-5 to a complete stop, and traffic sign recognition.

I read elsewhere that Mazda

I read elsewhere that Mazda may be losing its interest for SUV's with the view ahead to electric drivetrains, there was even hint at an EV with a rotary engine range extender which would be very interesting in a CX5, the rotary engine being very compact for power output and whilst lacking torque would be ideal for running at fixed speed on a generator and would leave plenty of space in the car so it need not be compromised. But Mazda are only thinking of small car applications.. pity.
SmokingCoal 20 March 2017

Genuinely pleased to see Mazda continuing with the SkyActiv-D engine line up. Some of us out in the countryside do actually drive diesels without ever going into repulsive city centres. Well done on producing another great looking model.
View all comments (14)