From £23,6958
Sharper looks, a more luxurious interior and an engaging chassis thrust new Mazda CX-5 towards the top of the mid-sized SUV class
Open gallery
Close

The new Mazda CX-5 is a crucial car for its maker. Not only does it fall into one of the world’s most competitive segments, SUVs, its predecessor has been a key asset in helping the firm's sales in Europe surge by 60 percent in the past five years. The success or failure of this second-generation car could quite literally set the course of Mazda's future.

Mazda is well aware of this, so rather than resting on laurels and gently evolving its Volkswagen Tiguan rival, the firm’s designers and engineers have worked to offer improvements in nearly every area. They claim boosts in design, interior quality, performance and driving dynamics, so despite having a near identical footprint and dimensions to its predecessor, the 2017 model is a very different proposition.

But as the increasingly congested mid-sized SUV class gets more and more competitive, the question is: can the Mazda CX-5? 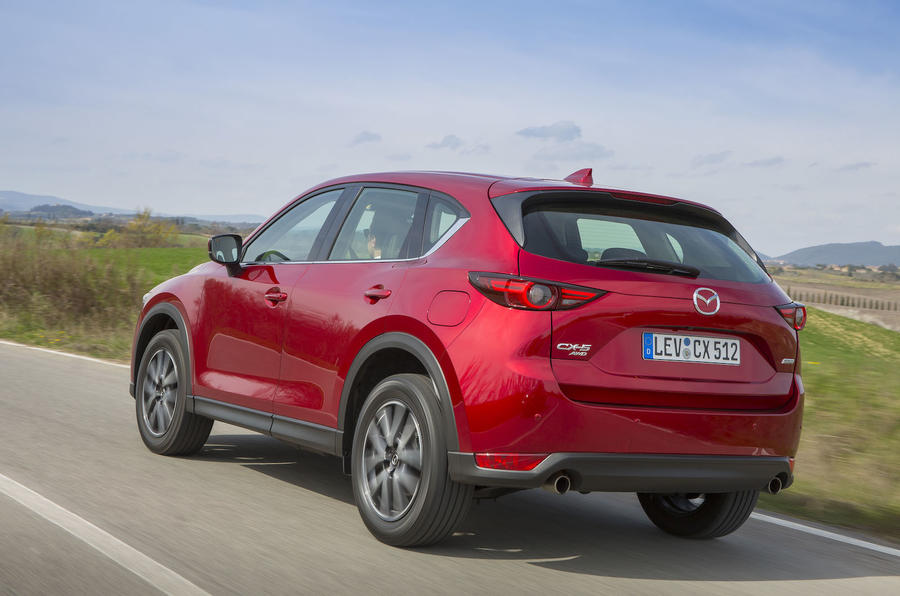 Things certainly look good at first glance. The outgoing CX-5’s soft, cuddly exterior has been swapped for a sharper, more mature design that borrows lines from the stunning RX Vision concept shown at the 2015 Tokyo motor show. This trend continues inside, where clean Japanese design and soft-touch materials are located alongside a generous list of standard tech that includes a 7.0in touchscreen with sat-nav as standard.

UK trim levels are yet to be confirmed, but the ‘high-spec’ model we sampled – likely to retain the Sport Nav moniker - features a leather-covered dash and door trims, leather seats with contrasting stitching, four heated seats and two USB ports in the front with two more in the back. There’s also a head-up display, which projects useful driving information onto the windscreen in front of the driver.

Interior quality is good, and the dashboard in particular is a great example of simplistic design. However, the CX-5’s interior just falls short of class-leading rivals in other areas, with the standard of stitching on parts of the seats, for example, not quite up there with the Tiguan. However, Mazda says quality will be improved slightly when the car enters production in April.

Overall, the CX-5 covers the boring stuff off well, with plenty of leg room in the back and lots of head room. There's also an electric tailgate on certain models.

But where the new CX-5 really excels is on the road. There's less wind and road noise than in its predecessor, and the new CX-5 responds well to being hustled along a country road – something Mazda is keen to stress was a priority during development.

Compared to the firmer-riding Tiguan, the CX-5 is more supple over bumps and on par with the Nissan Qashqai, but when pushed it flaunts better body control than the cheaper Nissan and ultimately this makes it feel more like a warm hatchback than an SUV. There is some body roll in corners, of course, but the CX-5’s handling is composed and its ride comfortable.

The new car’s structure is 15% stiffer than the old Mazda CX-5’s and the chassis gets the brand’s clever G-Vectoring Control (GVC) technology. The system adjusts engine torque in response to steering angle to optimise the vertical load on each wheel, lessening the need for the driver to make steering corrections. It also makes the car feel agile and quick to respond to direction changes and, when coupled with the optional four-wheel drive, means cross-country pace is highly impressive. 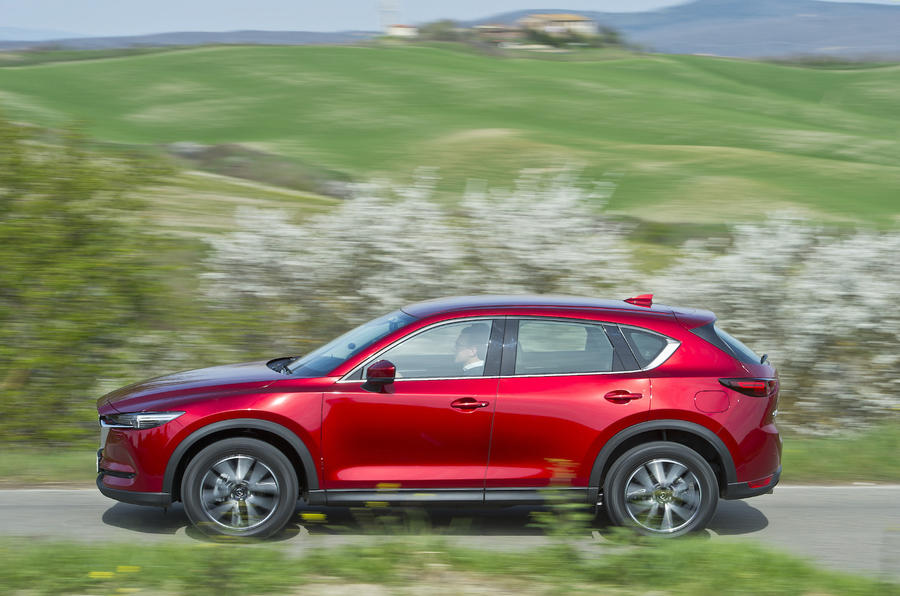 Our test car had 19in alloys with Toyo Proxes R36 tyres, which gripped surprisingly hard. We were able to send the car charging into corners on our Italian test route, and the nose always went where it was pointed, albeit with the gentlest hint of understeer.

Admittedly, versions riding on 17in wheels and Yokohama won't be able to corner as quickly, but the CX-5’s inherent composure and predictability remain intact, which is rather good going for a big SUV.

The 173bhp 2.2-litre diesel Skyactiv-D engine we're driving here suits the car’s character best. It produces 310lb ft of torque at 2000rpm to give flexible and muscular performance, and it sounds good too (for a diesel) projecting a deep growl into the cabin that’s satisfyingly sporty.

The less rev-happy 148bhp and 280lb ft version of this engine is almost identical in character and is the most frugal powertrain with a claimed 56mpg possible - making it the top contender to be the best-seller in Britain.

The CX-5's biggest flaw actually comes with its petrol engine, which is a naturally aspirated 2.0-litre four-cylinder called Skyactiv-G. Enthusiasts might assume this motor, with its 158bhp arriving at a peaky 6000rpm, would be rewarding, but it feels wheezy and gutless through the mid-range and therefore not suited to an SUV.

Six-speed manual or six-speed automatic gearboxes are available. The former features a rubbery, slick change, while the latter is surprisingly quick-shifting. When driven at pace in Sport mode, the auto can be a little slow to pick a gear, but if pushed into manual mode – in which you click the lever forward or backward to change gear – it responds more swiftly. 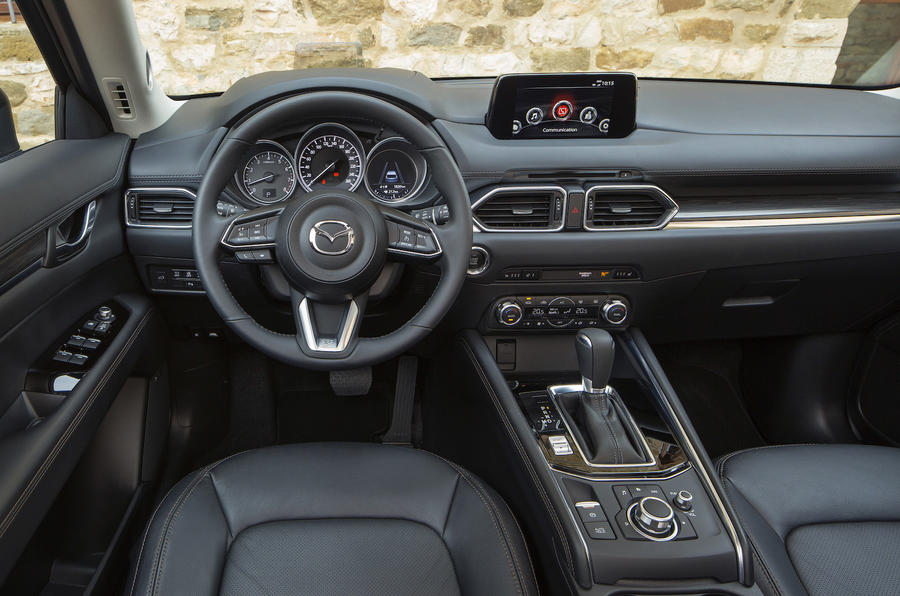 The Mazda CX-5 has long been a good choice for keen drivers looking for a mid-sized SUV, but this new car, with its expected £24,000 entry-level price (or more than £30,000 for the hottest diesel), faces seriously stiff competition.

For that reason, those looking for strong design and a functional interior may be drawn to the more mainstream Volkswagen Tiguan, which costs from £23,140, or the cheaper still Nissan X-Trail - although the latter falls short on driver engagement. The BMW X1 doesn't, but it's less a conventional SUV and more a crossover, although its £27,850 entry-level price still arguably makes it a rival for higher-spec CX-5s.

For lovers of driving, the dynamic Ford Kuga remains a class favourite, but the Mazda is equally as entertaining to thread along a twisty road and has a significantly more premium interior to help justify the additional £3,000 of its list price. As such, the CX-5 is a unique offering in its class - and, in our opinion, nothing comes close in terms of looks.

Hmm..gone a bit too 'mature'

Hmm..gone a bit too 'mature' for my liking - the side seems a bit dull compared to the last version. Interior is way better though, so that's a bonus. Shame diesel is dead - sounds like they need a better sky-activ petrol.
angelcyn 25 March 2017

As others have said they need

As others have said they need anew petrol engine for this car and others in the range, I believe a turbo unit is on the horizon ?
With diesel being squeezed ever more it makes no sense to buy one for the long term and people are already being put off buying diesels, plus what will the residuals be in a few years time.
db 22 March 2017

Looks premium without the premium

Mazda are on a roll with styling and interiors improving with each generation, though I am still not buying the need for an SUV so will stick with my Mazda6 diesel Tourer . I have driven a 2 litre petrol Mazda and yes it lacks torque surge but it didn't lack acceleration and on a short test drive was showing the mid 40's fuel consumption. Turbo's are great for emissions tests but aren't as consistent in real life due to the injection of more fuel under load and boost. The one area they don't need to improve is reliability my wife has a Mazda 2 that in 8 years has had brake pads and tyres I have had Audi, Volvo and BMW in the past all with a catalogue of faults Premium what premium !
View all comments (15)