BACK TO ALL NEWS
Currently reading: Renault EZ-Go shared mobility concept previewed ahead of Geneva
UP NEXT
Jaguar boss signs off plan for radical new EV line-up

Renault will reveal a new shared mobility concept at the Geneva motor show called the EZ-Go - and it has previewed the driverless vehicle's interior with a new image.

The image shows three passengers sat on a bench-like seat in a cabin surrounded by large glass sections. No conventional features of a car interior are in sight.

Renault's official image comes in the week after the concept was spotted on the streets of Barcelona. Pictures (below) were posted on the Cochespias web forum and showed that the concept will be lower than driverless pods produced by rivals, such as the boxy Volkswagen Sedric.

Renault said the vehicle illustrates “its vision for shared urban mobility”. The brand said that it's “passionate about making life easier for customers”, suggesting the model has been developed to become part of a ride-hailing system or public transport network. 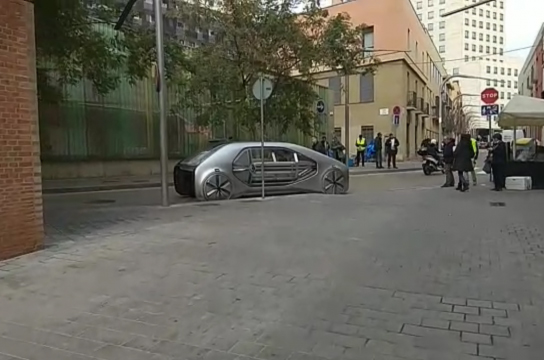 Details of the powertrain have not yet been disclosed, but the pod was seen being controlled by a remote control, suggesting it's an autonomous electric vehicle. The images show what looks to be an open-plan interior with no steering wheel.

Renault’s research into autonomous technology was demonstrated with its Symbioz concept (which Autocar has sampled) last year. The Renault-Nissan-Mitsubishi Alliance is investing £8.9 billion in electric and autonomous cars as part of plans to bring 40 autonomous-capable cars and robo-vehicles to market by 2022.

Alongside its new pod concept, Renault will show an updated Zoe in Geneva. The electric hatchback has received a new R110 motor that ups its power to 107bhp, a 16bhp boost over the current R90, yet has no impact on the car's 250-mile NEDC range.

"spotted on the streets of Barcelona" makes it sound like it was wizzing round town. 3 pics all in the same exact location on a back street with no one looking at this bizarre contraption just points to a staged photo shoot!!!

Death of the Taxi.....?,could happen, here’s the scenario, by say 2025 London has fleets of autonomous Taxis, all programmed with all the routes in London, you may have an app on your mobile which “hails” a Taxi to wherever you are, you may get waiting time or not depending on time of Day, now this suggests that Taxi drivers are redundant, well maybe they should invest in or two of these Vehicles...?, personally, I can’t see that happening.