After seeing the concept for the first time at this year's Frankfurt motor show, we find out what it's like from behind the wheel
Open gallery
Close

One moment I’m in the driver’s seat of the Renault Symbioz demo car prototype, watching the system deal with the vagaries of cars around me as I cruise down a French highway in the bright sunshine. Only the sound of driving rain suggests something isn’t right.

Moments later, the sky darkens, the cars fade until only trailing red brake light remains, and I’m driving in the heart of a futuristic city. Then, suddenly, I’m airborne, flying with the birds through the clouds, looking down on a vast forest beneath me.

Renault Symbioz concept is designed to integrate with your house

No, I haven’t taken leave of my senses – or a copious amount of drugs. Instead, I’ve been sampling a virtual reality experience installed in Renault’s electric, connected and autonomous Symbioz prototype car to show how people might spend their time in a self-driving car in the future.

While the VR experience is the most outlandish design concept on the Symbioz, the car certainly points to how Renault envisages the near-future of electric and autonomous cars.

What is the Renault Symbioz demo car?

The Symbioz demo car is markedly different from the Symbioz concept that was shown at the Frankfurt motor show earlier this year, although the two machines, along with the model house they can ‘connect’ to, were developed in parallel.

The Symbioz concept was designed to show what an electric, connected and autonomous Renault machine might look like in the year 2030. By contrast, the demo car is designed to showcase near-future technology that Renault will offer on other models by 2023. 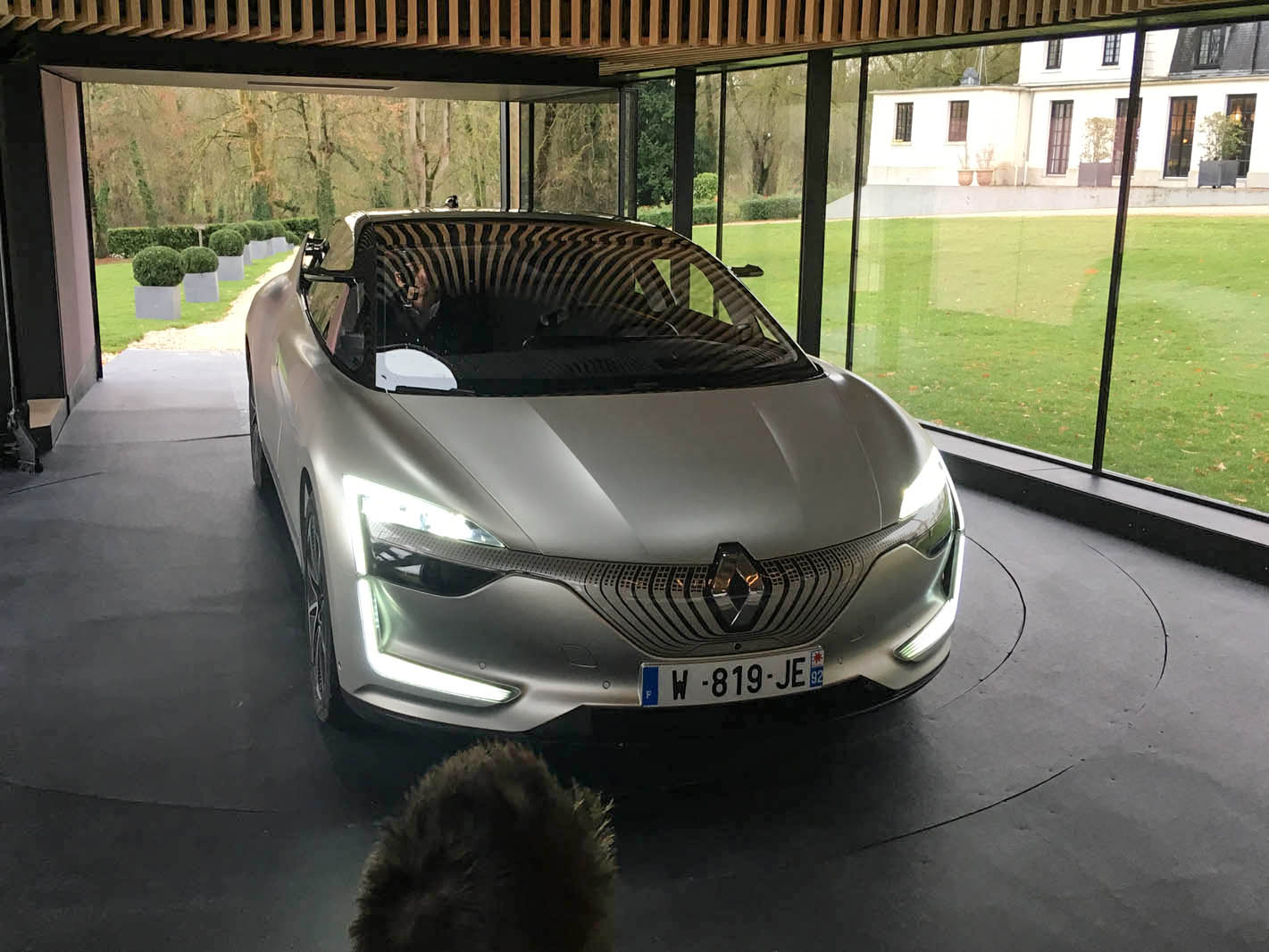 Project manager Mathieu Lips explained: “The purpose of the demo car is not to gather autonomous data but to bring two worlds together. For a prototype car, you take a normal car, add loads of sensors, stuff lots of kit in the boot and go testing. At the same time, you go to motor shows and see visions of what autonomous cars will look like. We wanted to bring those together and merge the ideas of designers with a car capable of autonomous running.”

The concepts on the Symbioz demo car have already been tested in a number of prototypes: a Renault Talisman nicknamed ‘Road Runner’, an autonomous-equipped Espace called ‘Ghost Rider’ and another Talisman fitted with sensors to match the dimensions of the Symbioz called ‘Mad Max’.

There are no plans to release a production version of the Symbioz.

The Symbioz prototype is powered by two electric motors located on the rear axle, each driving one wheel. The motors combine to produce a maximum power of 670bhp at 487lb ft of torque, or a continuous output of 482bhp at 406lb ft.

That enables the car to achieve 0-62mph in around six seconds. Renault has not released the top speed of the car. The Symbioz uses a version of Renault’s 4Control all-wheel steering system.

There is double wishbone front suspension, with a multi-link system at the rear, and steel active shock absorbers all round to adapt the ride for motion and torque. 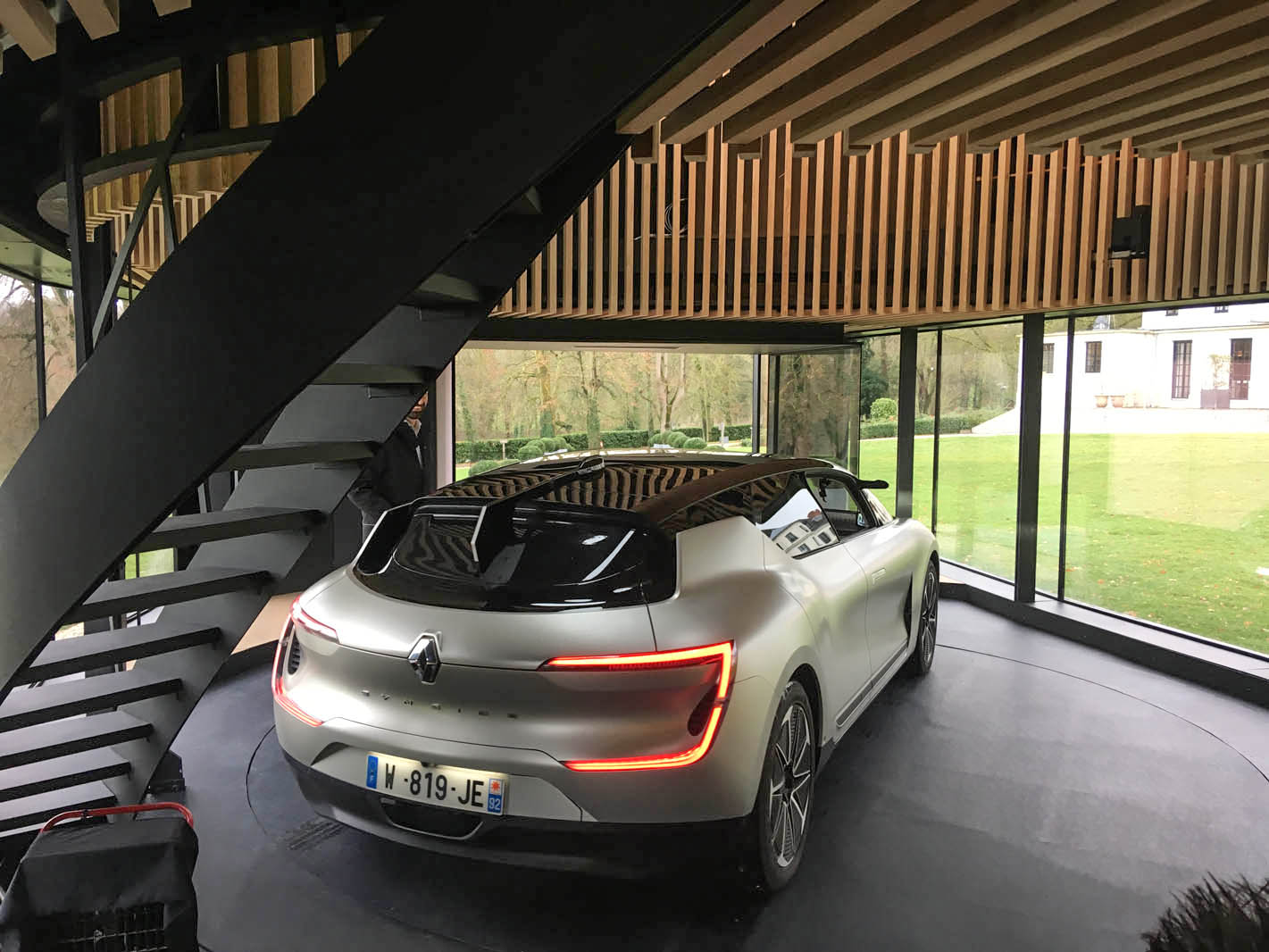 The car features three drive modes: Classic, Dynamic and AD (autonomous driving), each with associated lighting and fragrances to establish the difference.

The demo car is fitted with a 72kWh battery pack, located under the floor. The architecture has been designed to accommodate batteries with a capacity of up to 100kWh. During the test runs, the Symbioz was powered at a charging point that could supply up to 150kW, allowing an 80% charge in less than 30 minutes.

The outside of the Symbioz was styled according to Renault’s current design philosophy, with a sleek look that also boosts reduced aero – helped by using cameras for both the wing mirrors and rear-view mirror.

The rear placement of the electric motors and the underfloor battery also helped to increase the interior space available in the four-seater, which Renault designed to match that of an E-segment machine.

To create extra space, Renault moved the heating system off the dashboard to the front windscreen of the car and also moved the speakers. Instead of placing them in the door and dash, Renault worked with specialist firm Devialet to install four speakers – in the front dash, rear console and the two B-pillars.

Renault also took out all the safety functions from the door, instead installing the required side impact protection in seat arms. The sense of spaciousness inside the car is enhanced by wood panelling in the back and a large panoramic moonroof. 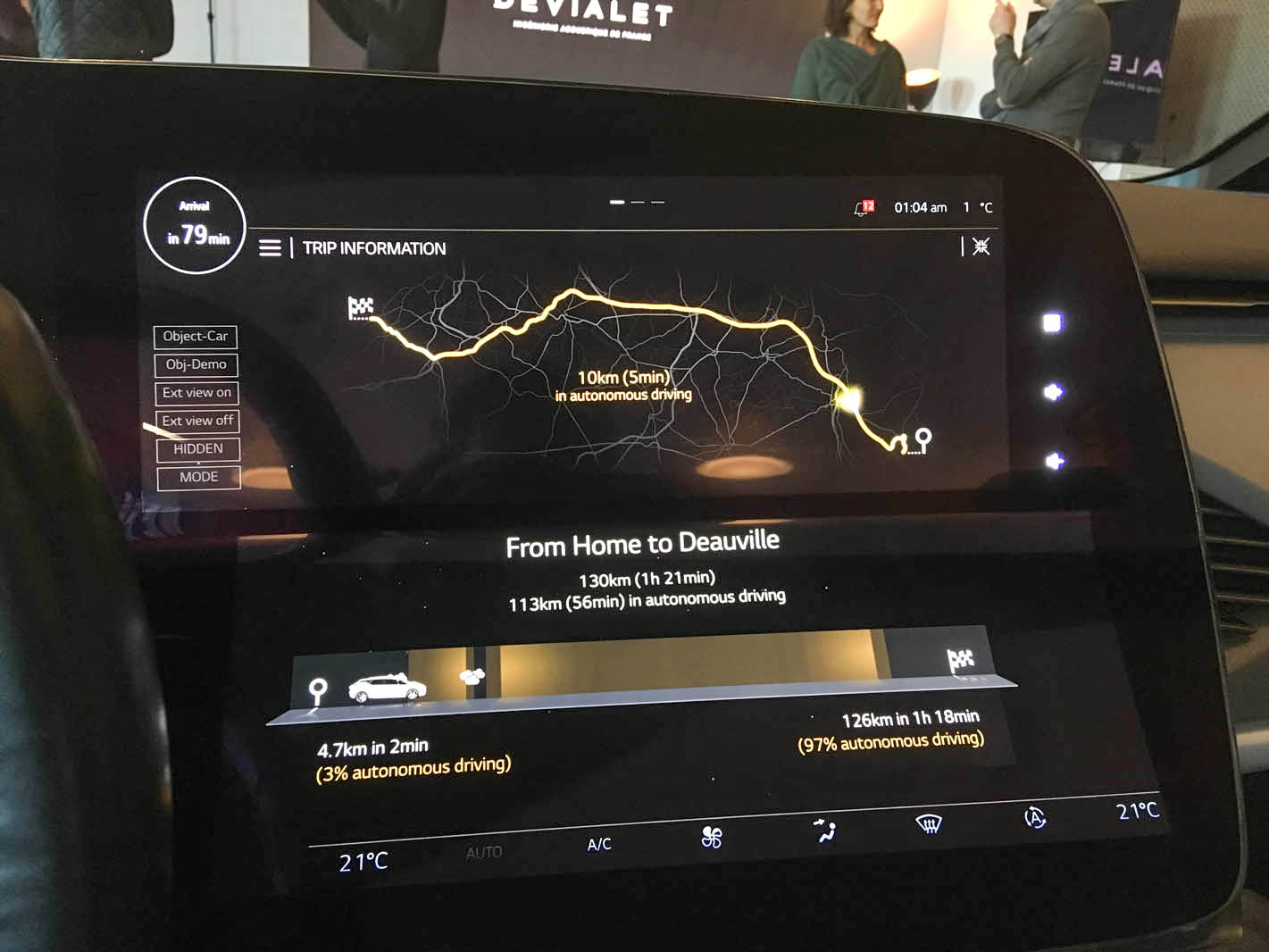 A key question Renault wanted to explore with the Symbioz is, once freed of the need to drive, what people would do with their time in a car. The Symbioz’s dashboard is dominated by three 12.0in HD OLED screens produced by LG. The screens are arranged in an L shape, with the two in the centre part of the console touchscreens, with a smartphone-style interface also designed by LG. The interface can also be accessed via a 'mirror' app on a smartphone, enabling people to access it without needing to reach the dashboard when in autonomous mode.

Our short test in the car didn’t offer much time or ability to truly grasp the dynamic capability of the Symbioz, but it was enough to showcase that it certainly doesn’t feel like a one-off prototype to drive. There’s a little delay in initial pick-up and you can certainly feel the weight of the vehicle, but the steering is light and responsive at low speed. All-round visibility is good, thanks to the large front windscreen and large side windows. 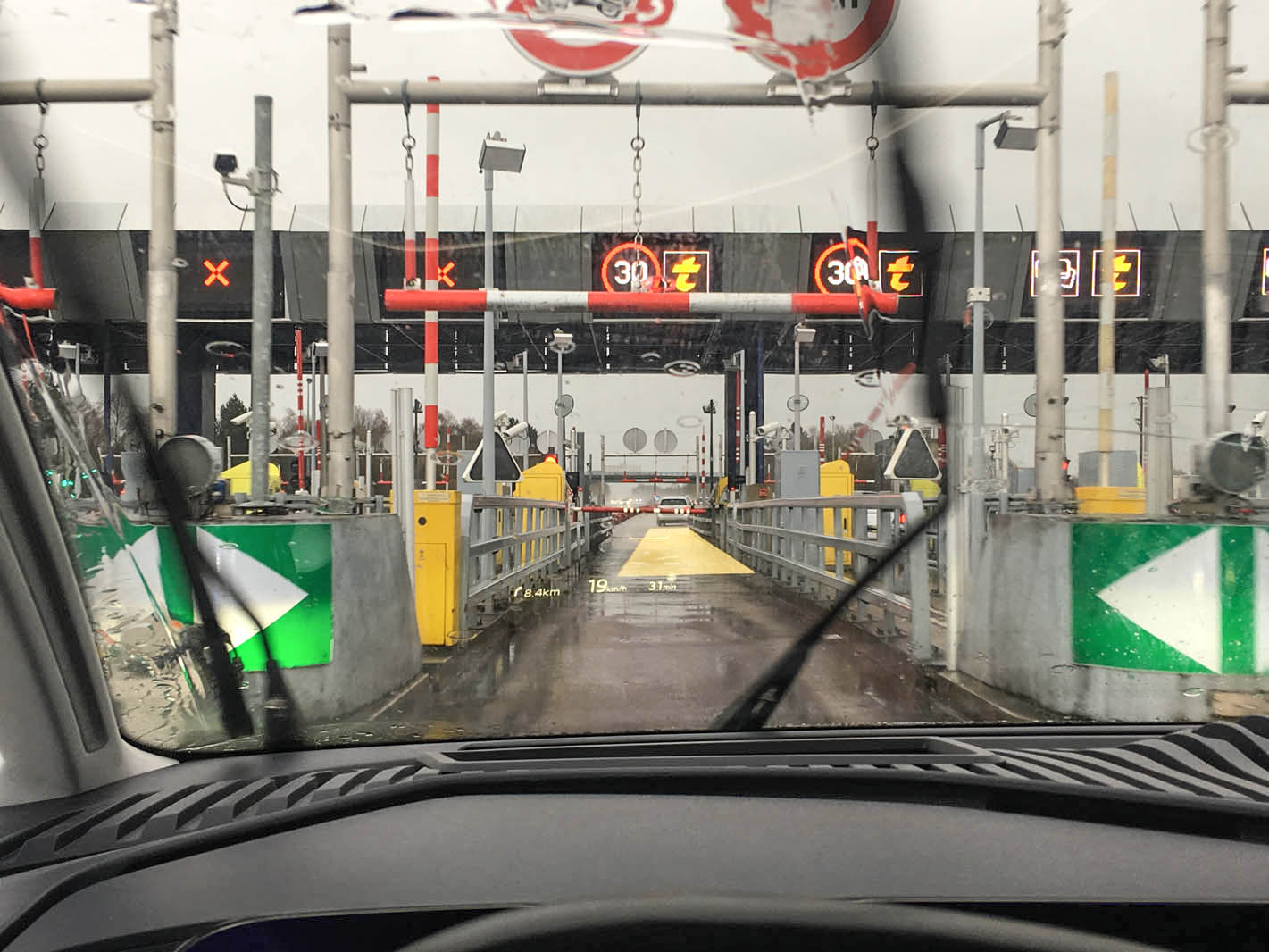 In normal mode, the car is responsive and rides smoothly on both tight French country lanes and the highway. Switch to Dynamic mode, engaged by pressing the Renault logo in the centre of the steering wheel, and – as well as the dashboard changing to a more dramatic styling – the steering wheel is moved a little closer, the steering stiffens up and the car is able to use more of the power from the motor. As you’d expect from an electric car, the instant torque available in this mode, combined with the extra power available, gives it a good kick of acceleration and allows you to get up to speed quickly on a highway.

To engage the autonomous mode, you need to wait until the OLED display tells you it’s available and then firmly press two buttons mounted on the steering wheel. At that point, the car takes control, and the seat moves away from the dashboard into a 'zero gravity' position. It can also tilt up to 15 degrees inwards, so you can talk to a passenger more esily.

The Symbioz offers level four autonomous driving, whereby the car can guide itself with minimal supervision, allowing you to pay attention to other tasks – although, for safety reasons, a Renault engineer with special controls was sat in the passenger seat, ready to reclaim control.

The autonomous section of our route was done on a 50km portion of French highway operated by SANEF, with the Symbioz using data from five antenna that have been installed on the roads by that company to analyse data flow. TomTom HD mapping information in the car’s computer is then used to validate that data, while the Symbioz itself uses an array of sensors and cameras to track vehicles around it in order to change lane. 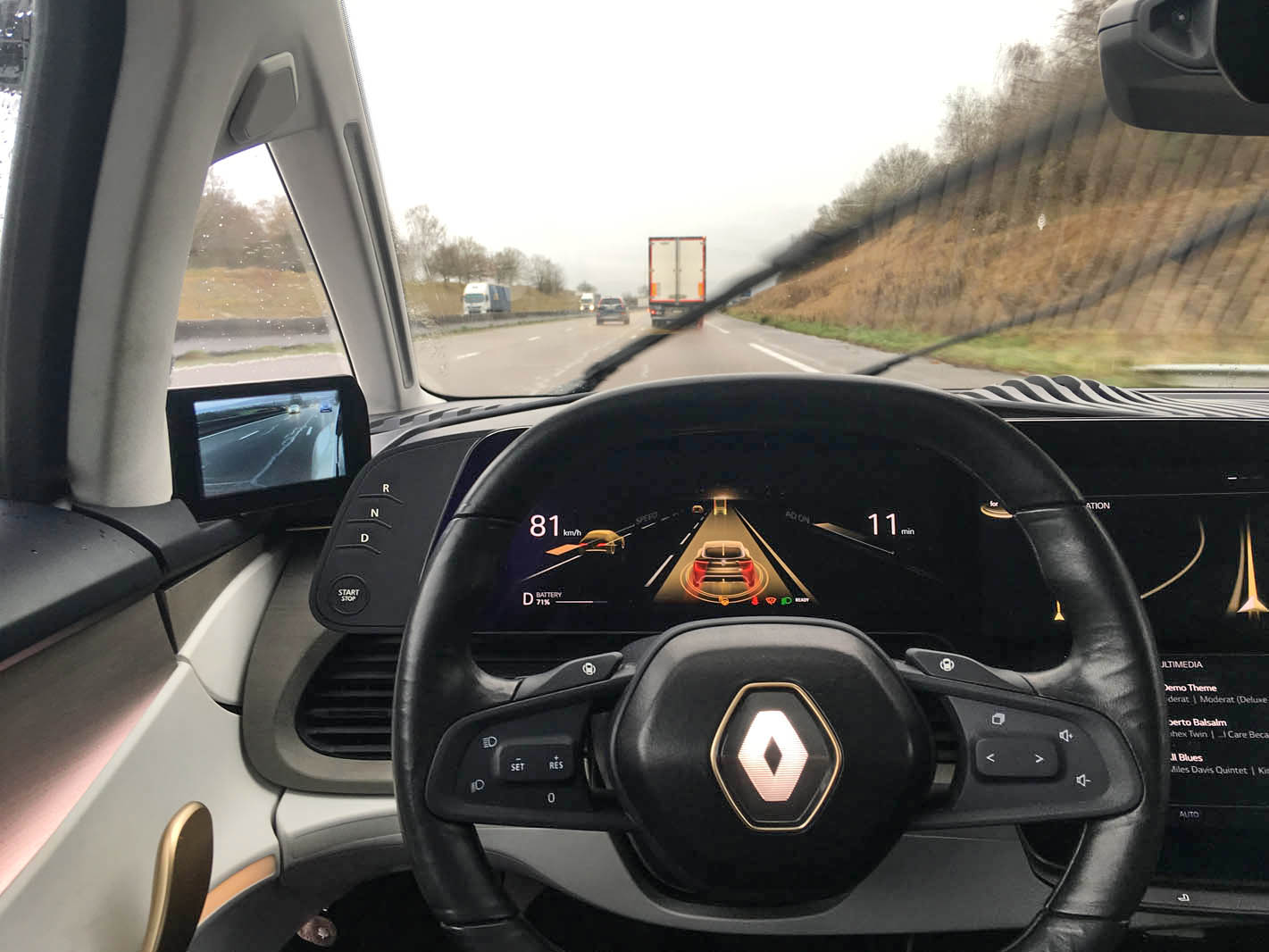 While the system had an initial reluctance to switch to autonomous mode on our drive, once it was engaged it was remarkably smooth – and you quickly become trusting of its ability to read the road and other drivers, even in heavy rain.

A large, LG-developed head-up display features augmented-reality-style overlays that showcase the Symbioz’s intended path, as well as the movement and direction of other cars. That display is designed to reassure nervous users of the car’s ability to monitor and react to all situations, and also adds a computer game-feel to proceeding.

Out route included a highway toll booth, showcasing how the car uses data fed to it to react. It takes information from SANEF about which toll booths are open for tagged cars in order to select an appropriate lane on approach, and then slows down to an appropriate speed before travelling through it at 20km/h – automatically processing the payment as it goes.

Experiencing a virtual world in a real car

Of course, watching a car drive through a toll booth is quite mundane – and that’s why, to showcase how one might pass the time, Renault tasked Ubisoft with developing a VR experience.

Put on the VR headset with autonomous mode engaged and you first see a virtual representation of the inside of a Symbioz. Cleverly, the programme takes real-time data from the car to match the motion of the vehicle – and highlight cars around you. 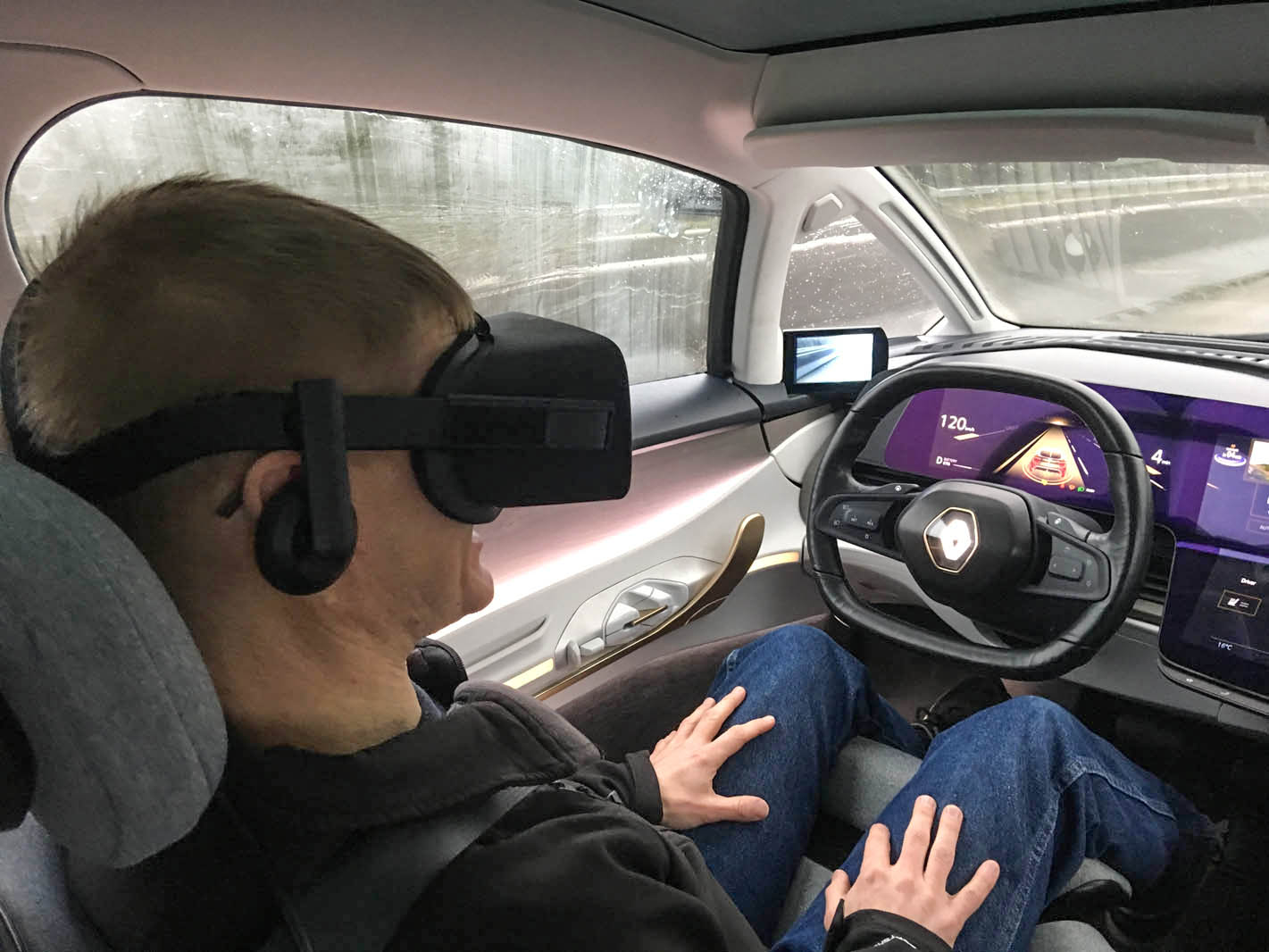 As noted, though, what starts as a virtual representation of reality ends with you floating over a vast forest, with only some subtle green dots left to place the road and maintain your horizon.

Once that programme ends, it’s something of a shock to return the headset and to the middle of a French highway on a rain-lashed day – which perhaps showcases why, in the future, people might choose to spend long journeys passing time in a virtual world while their car does the hard work in the real one.

The future of the Symbioz

The Symbioz demo car is strictly a one-off, based on a bespoke platform that wasn’t created with the intent for production. But both the electric technology, connected systems and autonomous features within it – although almost certainly not the VR headset – will be available on Renault models within the next five years or so.