The New Lancia Stratos is on display at the Geneva motor show before it is put into limited production by Manifattura Automobili Torino (MAT).

It was first unveiled in concept form in 2010.

Three versions of the car will be made - a GT racer, a Safari version and what the brand calls 'a comptetent supercar for the daily use'. The second of these is likely a rally-inspired version - another throwback to the car's motorsport heritage. At 4181mm long, 1971mm wide and 1240mm high, it's considerably larger than the original Stratos, and is 267kg heavier, at 1247kg. These dimensions make it the same length as the Audi TT, although it's considerably wider and lower to the ground, weighing around the same as the TT 1.8.

It was commisioned by billionaire German entrepreneur Michael Stoschek, chairman of car parts supplier Brose and a rallying enthusiast. The design was penned by Pininfarina, whereas the original Stratos was the work of Bertone. 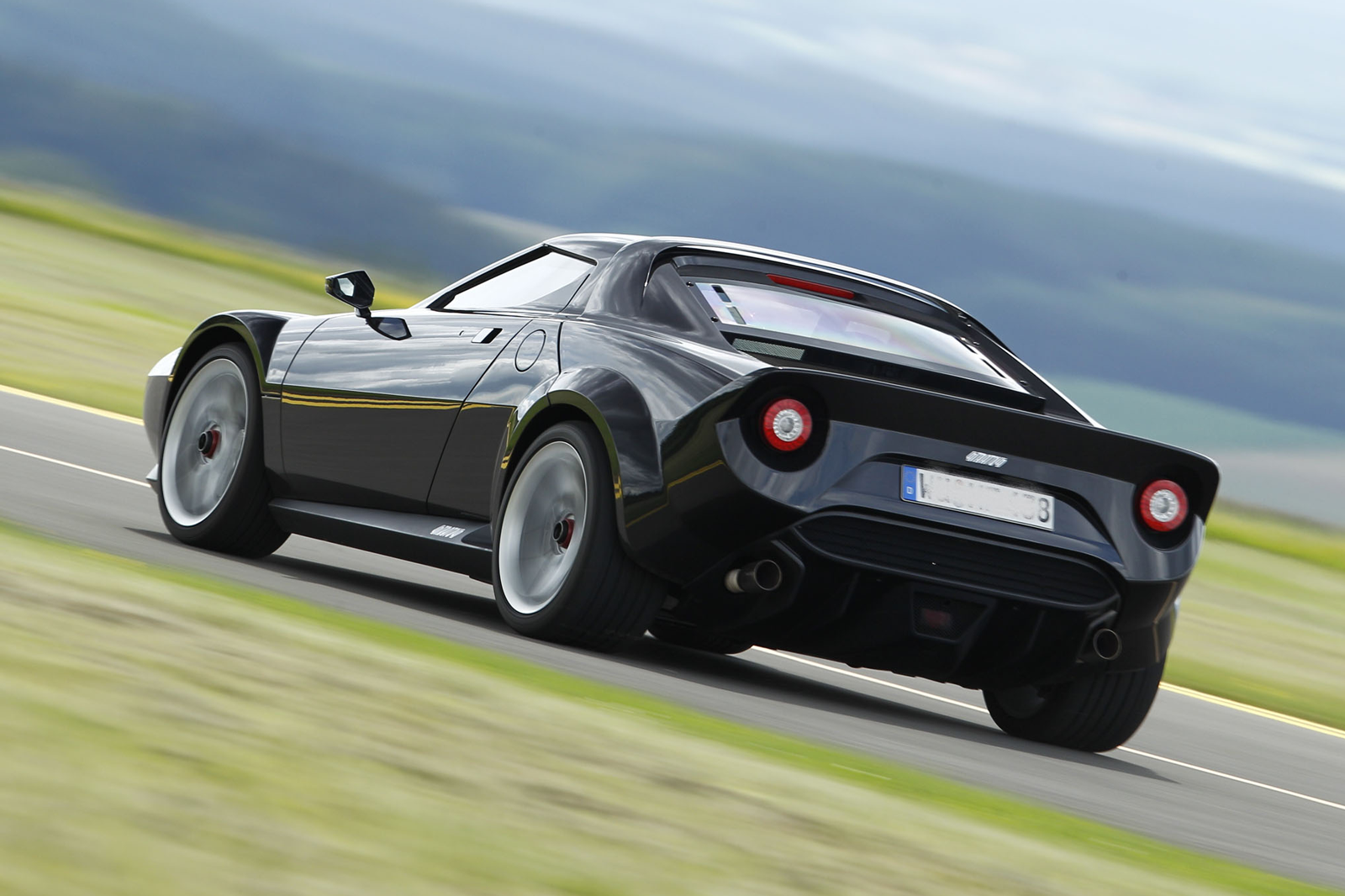 The mid-engined design features the wedge profile, semicircular windscreen, side tanks, removable front and rear servicing hoods and engine-access hatch of the original.

The original concept was based on a cut-down aluminium spaceframe structure from a Ferrari 430 Scuderia and used that car's drivetrain. However, in 2011, Ferrari blocked Pininfarina and "any other Ferrari-dependent suppliers" from putting the New Stratos into production, prompting the car's designers to look elsewhere for a base.

MAT says that it has obtained from Stoschek "permission to replicate the New Stratos using the same design and technologies of his car". 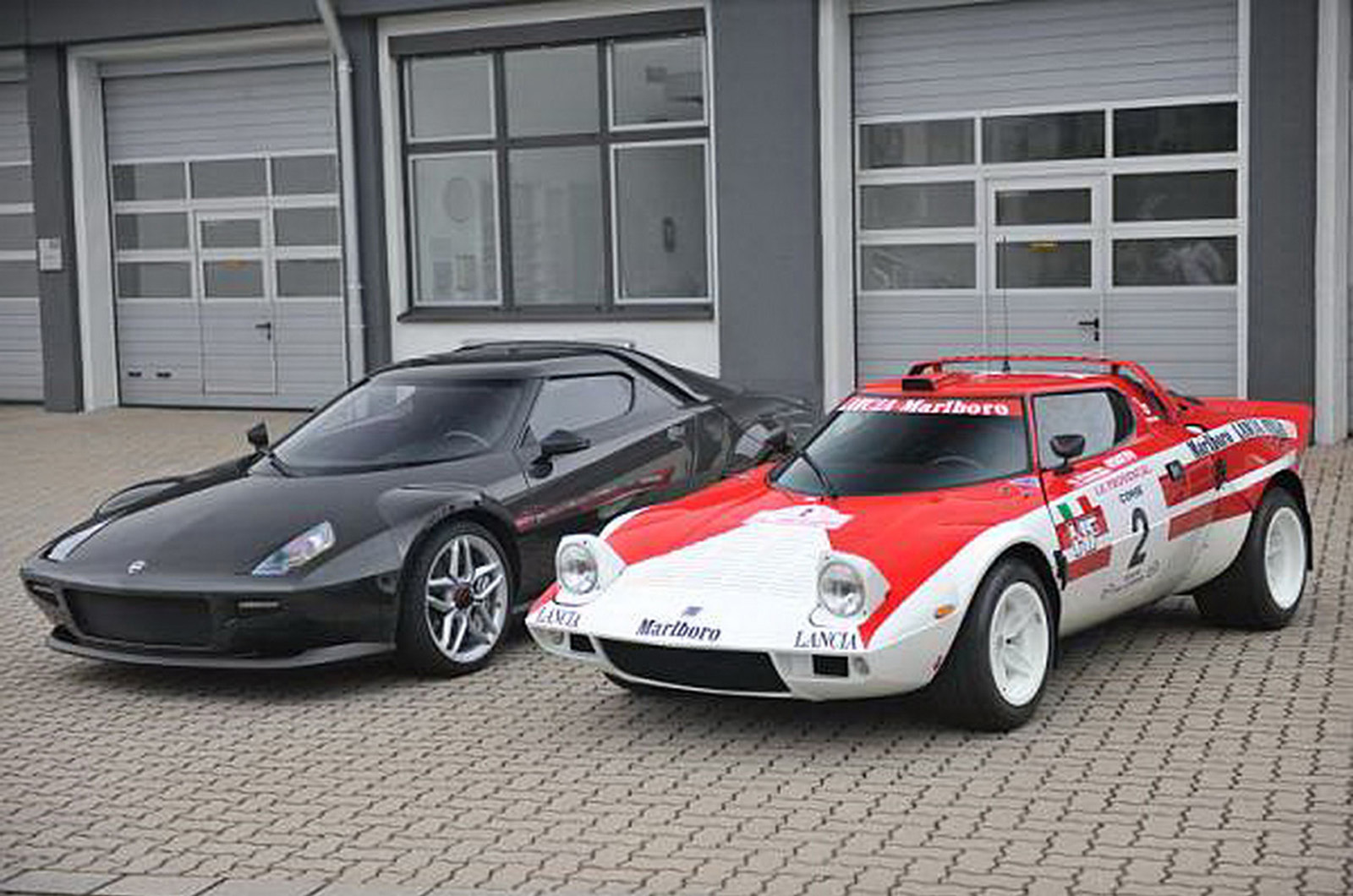 The new car has similar dimensions to 3710mm-long original Stratos, with a similarly short wheelbase, and is claimed to have a "lightweight design"; the concept had a kerbweight of 1274kg.

The only detail revealed about the mechanicals thus far is that the engine produces 542bhp, while pictures show the steering wheel-mounted shift paddles of an automatic gearbox. The concept's Ferrari-sourced 4.3-litre V8 produced 532bhp.

The New Stratos's stripped-back interior mirrors many features of the original's, including an integrated roll cage and door compartments for driver and passenger helmets. Stoschek said: “I am delighted that other passionate car enthusiasts will be able to experience how the successor to the most fascinating rally car of the 1970s still sets the bar for design and performance”.

MAT's portfolio includes the Apollo Arrow and Scuderia Cameron Glickenhaus SCG003S. The company, which designs, engineers and builds one-off and limited production luxury and racing models, is headed up by its founder, Paolo Garella, who previously worked for Pininfarina and has been involved with more than 50 bespoke car projects over the past 30 years.

McLaren F1 to be reborn as ‘hyper-GT’

With all these reproductions going on by Jaguar, Aston and now Lancaster I was wondering if my lovely Oris could be remade and not the overdone Aquis.
Porus 10 February 2018

Bloody predictatext! I know I'm sad to do this whilst lonely drinking!
5wheels 10 February 2018

As a wheelman of the 80's and a bit before too, this was a legendary beast. I lived in Greece at the time and only one model was brought in and he won every race - except when it broke down- and he won consecutive domestic championships - and if I remember correctly podium for the brutal Acropolis. The new one will be better interior as you should for the old model be what was called italian ape shape. Anyone over 5'7"" was going to be in serious trouble with his head in helmet banging on the roof !!

Would LOVE - dearly love to afford one but it will never happen - but as an enthusiast I am really happy to see this being done. There will be a wad of buyers out there

OK, so most of you guys

OK, so most of you guys wouldn't buy one - that's a matter of personal choice but I'd be happy to buy one.

Granted it's not an original Stratos and I prefer the pop-up lights of the original but then it's not pretending to be a facsimile of the original but as the article says it's an homage, a modern interpretation - perhaps best to see it as an example of what the Stratos might have become had it remained in production.

To be accurate, the supremely talented Marcello Gandini designed the original Stratos and I agree it still looks better than the new one but ideally I'd buy both, the original as a garage queen collectors car and the new one to use.

Interestingly, Il Commendatore initially refused to supply Lancia with engines for the original Stratos and I understand that to begin with Ferrari were once again unwilling to provide engines for the new car but that's now been sorted.

Pricewise, £600k does look like a ludicrous amount but then its engineering and the Ferrari engine make it authentic in a way that cheap kit-car versions will never be.

I also love the Singer 911 which, for all its perfection, isn't a concours original, it's a 964 based reimagining of a classic air-cooled 911 with a £500k price tag - between the Stratos and Singer, the latter is more of interest to me but not due to the cost.