BACK TO ALL NEWS
Currently reading: 224mph Apollo Arrow to be co-developed by Scuderia Cameron Glickenhaus
UP NEXT
New 2022 BMW 3 Series brings redesign and tech upgrades

224mph Apollo Arrow to be co-developed by Scuderia Cameron Glickenhaus

Apollo, the company formerly known as Gumpert, has partnered with SGP to build its 986bhp and 737lb ft model
Open gallery
Close

The 224mph Apollo Arrow concept of Geneva 2016 will inspire a production model, set to be co-developed by supercar company Scuderia Cameron Glickenhaus (SCG) and on course to arrive sometime next year.

The new collaboration, lead by Apollo - a brand founded on the remnants of Gumpert - will also include Italian manufacturing house Manifattura Automobili Torino (MAT). The trio of firms will first work to produce a racing version of the Arrow concept, codenamed project Titan, that will be driven up the hill at the 2017 Goodwood Festival of Speed.

The V12-engined racer will then be followed by a V8-engined road car called the Arrow S. No arrival date has been set for this road model, but Apollo said both it and the racing car will benefit from SGP's extensive racing knowledge (which includes competing in the Nürburgring 24 Hours) and MAT's manufacturing skills.

SCG’s founder Jim Glickenhaus commented on the new partnership: “I’m really excited to be working on this project with Apollo. The Arrow is a thing of beauty and we can definitely bring a lot of technical know how to the table from our successful experience of competing on the toughest races in motorsport.”

Apollo’s chairman Norman Choi added: “The SCG003C is a really impressive car and I’m looking forward to working with the team to develop our new Apollo Arrow and create something truly special.” 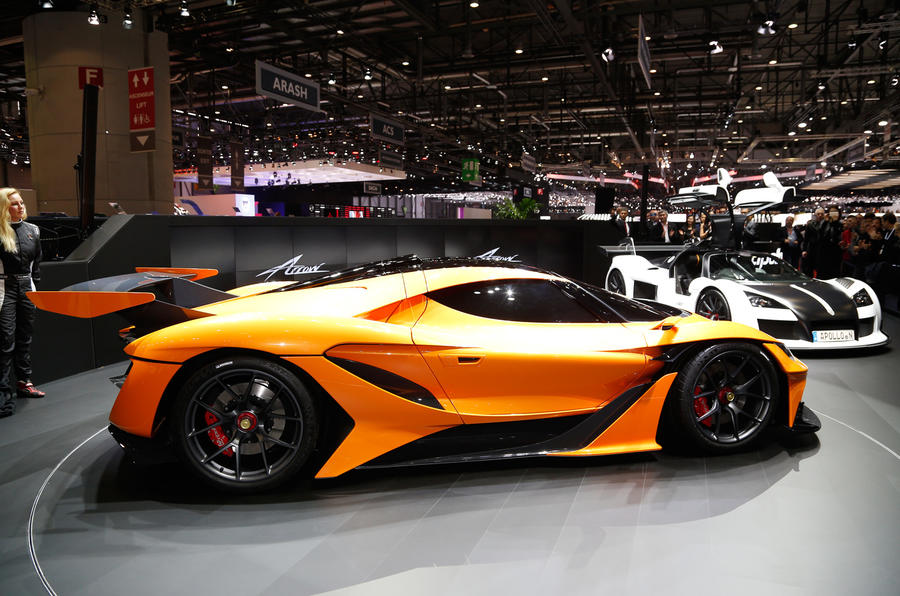 In concept form the Apollo Arrow uses an Audi-supplied 4.0-litre bi-turbo V8 producing 986bhp and 737lb ft of torque. It is housed within a tubular chromoly spaceframe and carbon tub. The design is a dramatically re-engineered version of the ApolloN, which itself is an evolved version of the original Gumpert Apollo model.

Apollo claimed that the Arrow weighs less than 1300kg, and it confidently predicted a 0-62mph of 2.9 seconds and a top speed of 224mph for the concept.

To make the car more usable Apollo also shrank the old Gumpert's 120-litre fuel tank and revised the front section of the chassis, significantly enlarging the cabin for the Arrow, allowing it to accommodate drivers up to 6ft 5in.

Along with a 100mm dropping of the sill, the car was said to be far easier than the Gumpert to get in and out of, and will eventually be offered with the convenience of sat nav and air conditioning.

Prices and volume all remain, for now, distant targets. But the car is real, still engineered in Germany and, it was revealed at the Geneva motor show, still benefiting from the involvement of former company boss Roland Gumpert, who appeared in support of the firm’s new Chinese owners.

Scuderia Cameron Glickenhaus no longer has anything to do with this car.
Bullfinch 26 October 2016

Does it have a battery

Does it have a battery operated antenna ?
View all comments (4)