New Fiat 500e: electric city car seen inside and out in new shots

The new prototypes, clearly based on the outgoing model, don't reveal much about the new car's exterior. They do, however, offer the briefest of glimpses into the car's cabin.

We can see that the Mini Electric rival's dashboard has been completely overhauled, with new instruments and a large central infotainment screen visible. A new rotary gear selector also features, mounted on a plinth below the centre console and surrounded by buttons. 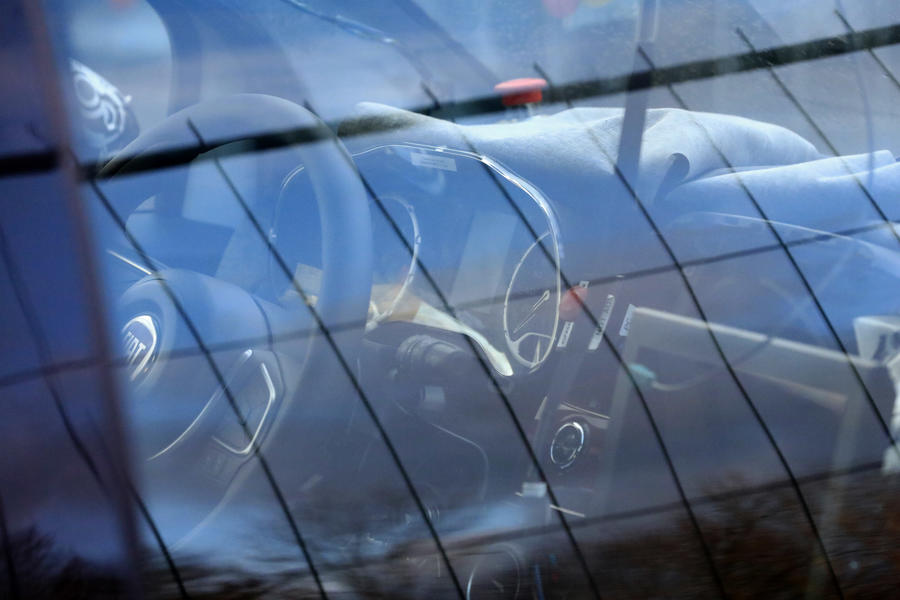 Earlier this year Fiat said it would invest 700 million Euros on the electric city car, to include a new production line in Mirafiori, Italy. Fiat hopes to produce 80,000 examples of the new 500e.

The car will be sold alongside the existing 500, which will continue to be powered by conventional petrol engines as well as receiving styling and technical updates.

The all-new electric 500 will sit on a bespoke electric car platform, according to Fiat boss Olivier Francois, with the same platform potentially earmarked for use if the the new Panda-inspired Centoventi concept makes production. The electric 500 will be a key part of Fiat's transformation in Europe into a brand focusing on small, electrified city cars.

"The car will stay true to everything you know about the 500, but will be entirely new," said Francois. "Under the skin it will be radically different, but otherwise you will recognise the size and proportions.

“But it is a big statement, starting our electric path with the 500. We are doing it with that car for reasons of pricing. It is clear that we cannot sell an electric 500 for the same entry price of today’s 500, but what’s clear is that more than half of our 500 customers today do not buy entry-level models. In fact, for them a 24,000 euro price is normal today.

“If you look at our electric competition, they are priced around 32,000 euros. The leap then from 24,000 to 32,000 is not so much, especially if you factor in government grants for electric vehicles.

Francois refused to be drawn on whether the electric 500 could be rear-wheel drive like the original, but said he would be open to the idea. He also said that an electric Abarth model could hold appeal.

The electric car platform that the 500e will sit on will be FCA Group developed. Francois said he would personally be open to sharing the technology with partners - the 500 platform has previously been shared with the Ford Ka, for instance, but he stressed that any such decision would have to be made at a Group level. 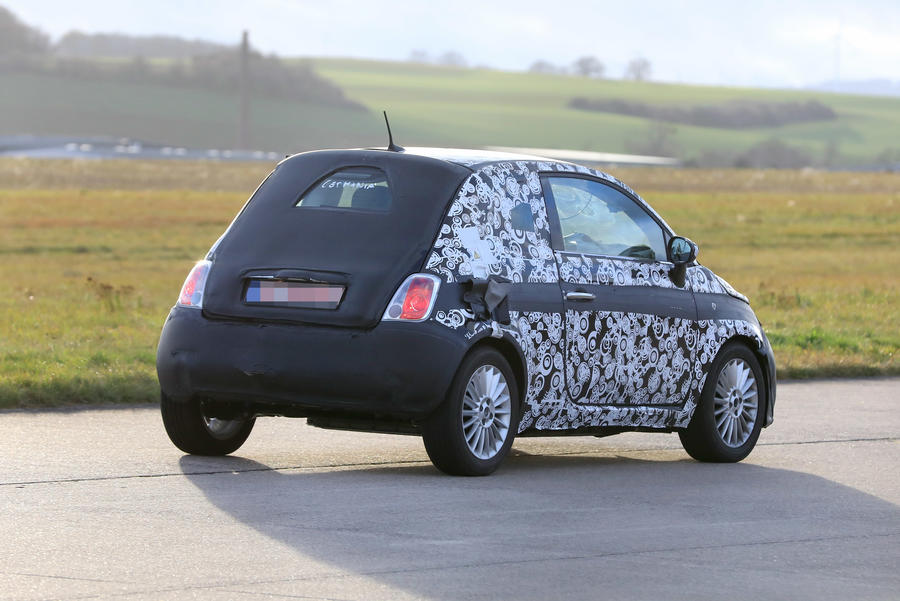 Fiat also confirmed the 500 lineup will be expanded with a 500 Giardiniera estate, although the firm didn't say if that version would also appear at next year's Geneva show.

The aim is to consolidate the brand’s dominance of the city car segment - the 500 and Panda hold a third of this market - while developing technologies that allow these models to satisfy emission regulations.

The 500 Giardiniera, which references the tiny wagon of 1960, will offer the best space efficiency in its class, says Fiat, and "unmistakable design". It too will get electric and mild hybrid variants.

The 500’s new platform architecture can also cope with a mild hybrid system. That unit consists of a belt driven, 12V starter-generator, although little detail has been provided on the electric drivetrain to be used in the 500. Lower-emissions petrol engines will also be offered in the 500 and Panda.

Francois conceded that the decision to develop the electric cars was driven "both by the desire to create a profitable electric car for our future, and to ensure we avoid the pressures of potential fines if we don't hit CO2 targets."

Given the limited space for batteries and the 500’s urban appeal, range of the 500e is likely to be less than EVs such as the Nissan Leaf, which offers around 250 miles.

The 500e will be a rival to a growing number of small EVs - the first examples of the Mini Electric, Mini’s first series-production electric car, which was revealed earlier this year, are scheduled to arrive with customers in early 2020, with the Honda E arriving in the middle of the year.

The 500e's 'City Car' underpinnings will be one of four electric powertrains offered by FCA; a ‘Mainstream’ powertrain will be launched in the Jeep Grand Commander, a ‘Performance’ powertrain will feature in the Maserati Alfieri that's tipped for a 2020 Geneva motor show debut, and a ‘Premium’ EV powertrain will power the 2022 Maserati Quattroporte.

The push for electrification comes amid Fiat Chrysler’s abandonment of diesel; by 2022, there will be no diesel options in the FCA catalogue. These will be replaced by numerous hybrids, both full and plug-in, the first of which will be the new Jeep Grand Cherokee, landing in 2020.

The production capacity released by the deletion of the Punto and other unspecified Fiat models - such as Tipo - will be used to build more Alfa Romeos and Maseratis, whose premium prices can withstand the electrification costs. Some Italian capacity will be used to build some plug-in hybrid models, including certain Jeeps for global sale.

Honda Urban EV due in 2019 with few changes

Fiat to abandon production of its mass-market cars in Italy

The much talked about

The much talked about Giardiniera version of the current (pre-facelift) 500 never actually materialised, hopefully it will be different next time round. Its got to be better than the 500L and 500L MPW.

I've seen one in Budapest, admittedly with a California registration, last October at a charging point. Perfect size for me, the three door 500 is exactly the type of electric car I want since I don't drive long distances, or need a five door car. Up until now electric cars have been larger than I want, so this 500 is a car I can't wait to try.

I dont think we can belive

A lot of Rovers decline was due to poor management, agreed, but dont forget BMW asset stripped them and sold off the remnants, Fiat is part of a larger group so doesnt necessarily need to be making cars for all segments that the other brands can successfully sell in, it could effectively be like smart or mini, just producing niche cars, in this case electrified city cars. I'm hoping your slow decline prediction is wrong.

It is a shame they didn't invest in the punto though as it is still a good looking car that just needed modernising to keep up with the competition. From best selling modern supermini when launched its barely changed which is a shame.

Only the first three words of your post can in turn be taken as truth. You assert that the past must also deliver the future, what nonsense. The BMW MINI, "replaced" the original mini, around a dozen years after the latter ceased production...hasn't done the new MINI any harm at all. Keep posting though, all good fun :)

Fiat will be a Mini rival

1 June 2018
I imagine FCA will move to joint Fiat, Alfa Romeo, Jeep dealers across Europe. In Scotland we have 1 Alfa Romeo dealer, but many more Fiat dealers. Given the investment in Alfa Romeo they need to make it easier for us to actually buy one!

I feel nervous about this.  The problem with the 500 is that it looks so right; so how do you improve on it?  Fiat have already corrupted the design language with the 500Ls that just don't work (the 500X is OK) and there is also its past record of having spoilt two versions of the Punto with unsuccessful facelifts (one being on the current version which was then reversed!).  Also, styling of the current Panda is not a patch on the previous one.  Things must move on but if I were in Fiat's styling team, my heart would be in my mouth somewhat!

Must be really hard to

Must be really hard to maintain an icon.

I'd love to see a manufacturer just leave it aesthetically, and update it as technology progresses. Surely there comes a point where you just have to say: leave it.

Regardless of the title/main text it's been on sale in te US for some time where's its struggled to get into 3 figures for some months.  They just look to expensive for what you get

There is an atmosphere of

There is an atmosphere of madness pervading the car industry at the moment.  It is as if it wishes to bring about its own demise as quickly as possible.

The once mighty Fiat will shortly become the maker of just two little electric cars in a completely unproven market.