BACK TO ALL NEWS
Currently reading: 2019 Mini Electric: first official pictures
UP NEXT
Fisker goes radical with Pear EV SUV

Mini has released official images of its first series-production electric model, providing a glimpse of the 2019 hatchback a year or so before it reaches roads.

The car, which is described by company executives as marking a pivotal point in the brand's history, because it directly links to the core values for which Mini was created, was recently spotted testing in the Alps.

But today's new images are the first that show the design changes to expect on the production model. It gets a flat grille and four-spoke wheels clearly inspired by the concept that preceded it.

Talking about wheels, Mini head of design Oliver Heilmer said: “at first glance, you recognize them as something that is really different, since the wheel is not symmetric.” He added: “The wheel is almost closed which is much better for aerodynamics.”

Explaining the grille’s design, which echoes many other electric-car grilles in that it is closed, said: “Electric powertrains need air in different places than internal combustion engines. The yellow stripe stands for Mini electric and the grey surface matches the wheels." The grey has also been chosen so it complements any paint colour choice.

Heilmer confirmed the electric model has been completely signed off from a design perspective ahead of its launch next year.

Although no images of the car's body are shown, brand boss Sebastian Mackensen told Autocar earlier this year that the design of the Mini Electric will be toned down from the concept because “Mini doesn’t need to make a big statement saying we want to be cool and electric any more”. Instead, the final production car’s design will mix the updated look of the 2018 Mini models with aerodynamic features of the concept. 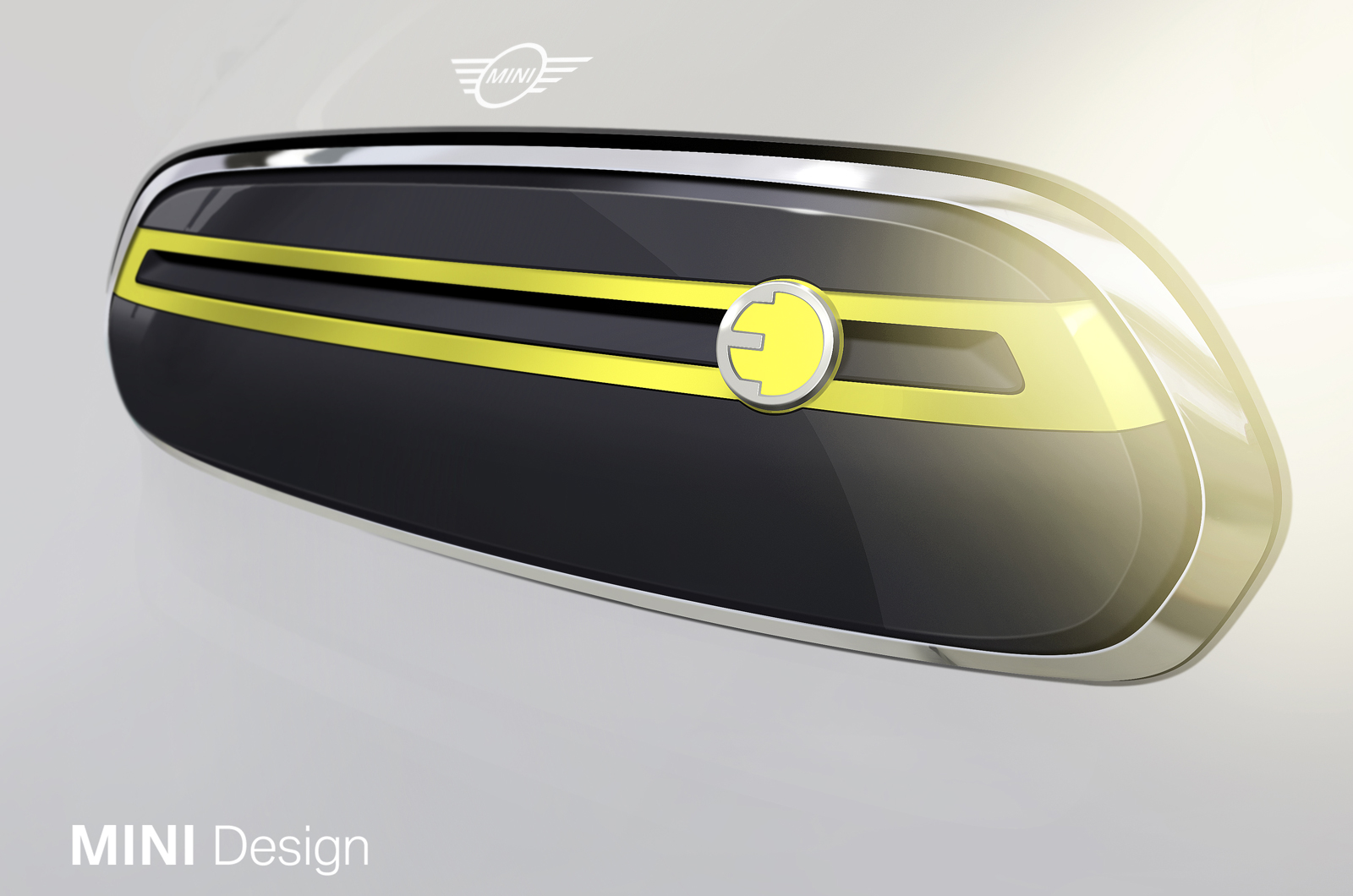 These include vanes that channel air around the body and an air extractor slot behind the front wheel, similar to the one featured on the BMW 8 Series concept. The electric Mini concept also has a more heavily sculpted bodyside and a neat intake with a tiny spoiler in front of the rear wheel.

Mini exterior design boss Christopher Weil referred to this as the “efficiency layer” at the concept’s unveiling last year. He said: “The way you manage airflow is specific for every individual car, but the main aerodynamic principles are the same. It’s very good for the drag coefficient when you have an opening behind the wheels so that the air can flow out, rather than just creating turbulence [inside the wheel wells].” He admitted that the unusual asymmetric wheel design is heavily influenced by 1980s car design.

Mackensen suggested several of these features could remain on the final car, but that “it will be a car that clearly shows it’s part of the latest Mini hatch family”. He described the finished product as a “fusion” that “will definitely be recognisable as being the electric Mini but will not be the concept entirely”. 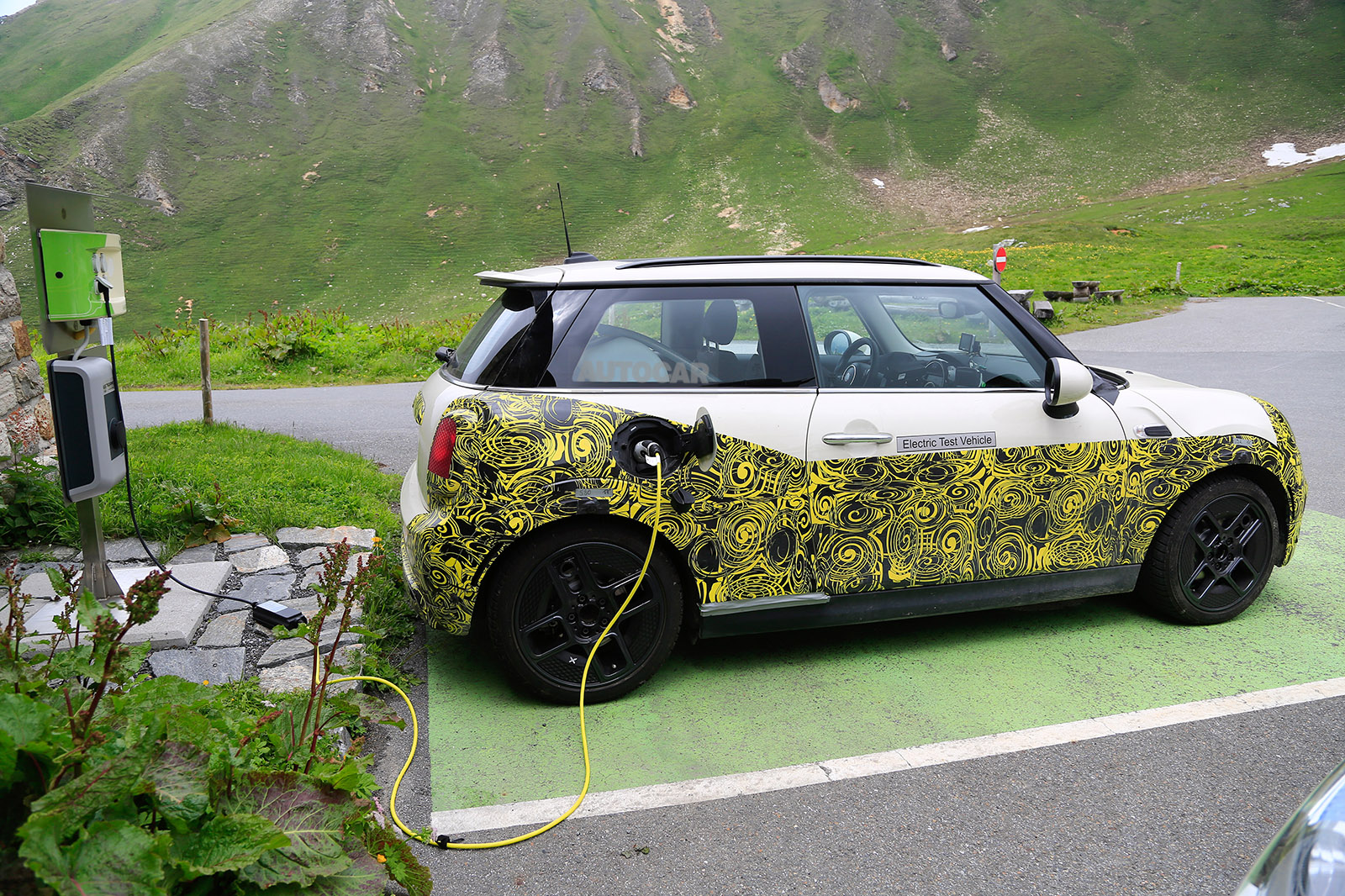 The aero-focused features will remain exclusive for the Mini Electric as well, with Heilmer stating that "it might be in five or six years" before "these differentiators" make it onto standard Minis.

Mackensen said he believes the Electric is the car that Alec Issigonis, who was responsible for the original Mini, would have created had he been alive today. “We always joke and say if Issigonis would invent the Mini today, it would definitely be an electric car,” said Mackensen. “It is the answer to current challenges, as the original Mini was in 1959.”

The car, first previewed by the Electric concept of 2017, was first spotted undergoing cold-weather testing, where the components and range of a development mule based on the pre-facelift Mini is being examined in sub-zero conditions. Its handling was also being assessed in these extremely slippery conditions; Mackensen has confidently predicted that the Electric will actually handle more like the original Mini philosophy had intended due to its lower centre of gravity.

“We always talk about go-kart feeling, and the electric Mini will probably bring that to another level,” he said. “With the torque and the responsiveness, combined with the low centre of weight, it will stick to the ground even more [than the combustion-engined car].” 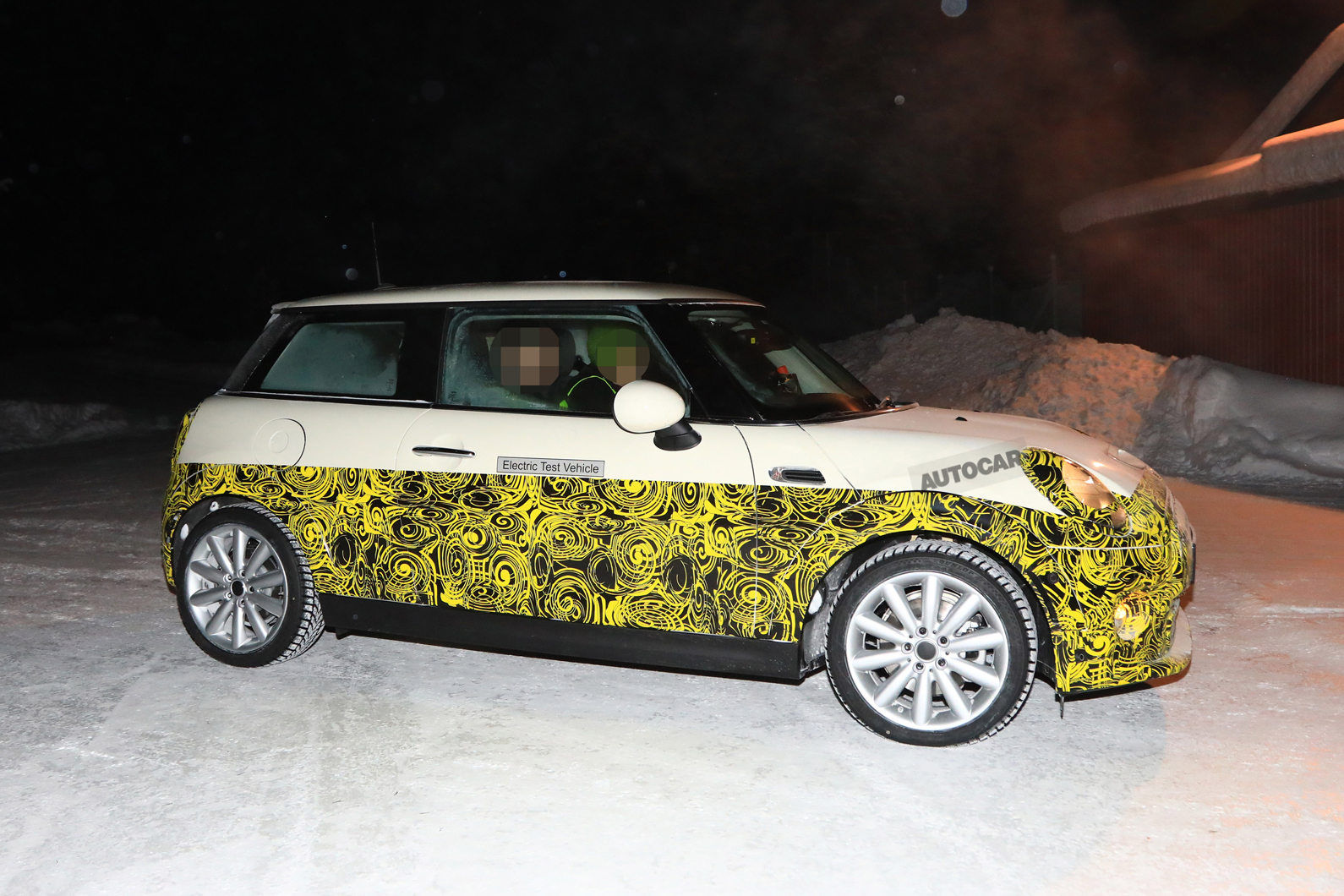 Although the Electric's range hasn't yet been confirmed, the latest BMW i3 of Mini parent BMW offers clues about what’s possible using the group’s electric technology. The i3 uses a synchronous electric motor delivering up to 181bhp and 199lb ft while offering up to 186 miles of range, according to NEDC tests.

Mini is undecided whether other variants of the electric hatchback, which will be based on the three-door body shape, will be launched in the first generation of the Electric. Consistency across the brand’s line-up suggests a Cooper model could follow, but Mackensen said finding the balance between performance and range was the first priority.

Production of the Electric will be handled at the brand’s Oxford plant from 2019, 11 years after the launch of the Mini E, which was limited to 600 examples.

Mini Electric due as fifth 'superhero' model in 2019

I suppose people who want a Mini that's eelctric will like this and that's fine since BMW also make the i3, which is infinitely more interesting. I think we've yet to see a manufacturer really explore what a car can look like when there are virtually no restrictions because of engine and so on.

Head of Siemens CEO did a speach directed at German car makers basically saying it'll cost jobs if they don't get their ars*'* in gear.

It's a MINI and doesn't need a 250 mile range for most people, but being on a modified platform it's at a disadvantage to the LEAF, Zoe from Day 1.

It will be a sales failure because it uses too much electricity.

Once electric cars become more popular, the cost of electricity from a charger will rocket.

The infrastructure has to be paid for by somebody and that somebody will be the user/customer.