BACK TO ALL NEWS
Currently reading: Fiat Chrysler Automobiles to abandon diesel engines by 2022
UP NEXT
High-riding Porsche 911 prototype hints at rally-inspired variant

Fiat Chrysler Automobiles will end production of diesel-powered cars across the product line-ups of the Alfa Romeo, Fiat, Jeep and Maserati brands by 2022.

The Financial Times reports that FCA will make the announcement in June under a mid-term plan which will signpost the company’s targets for the next four years.

FCA, which has 20 diesel passenger models in the UK across its line-up, is abandoning diesel from all of its passenger cars, although the company has yet to comment on whether this would include diesel-only models like the Fullback pick-up truck, or its four vans, three of which are diesel-only.

It’s the latest blow for the black pump, little more than a week after Porsche announced the end of production for its current diesel models.

FCA hasn’t been a stranger to diesel controversy in the past. It was previously accused of using emissions manipulation software on the 500X, as more manufacturers were sucked into the scandal around the world following the Dieselgate scandal precipitated by the Volkswagen Group.

Every European FCA brand besides Abarth has at least one diesel model in its line-up, with every model across Jeep’s range having a diesel variant.

The move is likely to make waves in America - Fiat Chrysler sold 152,218 cars in the USA in January, compared with less than 85,000 in Europe. The move has drawn praise from environmental groups such as Greenpeace, although FCA's first EVs aren't due until 2020 with the Maserati Alfieri, and the first hybrids only arrive on a small number of models - a potentially challenging mix when considering ever more stringent EU emissions laws.

A Fiat-Chrysler spokesman declined to comment on the matter.

Fiat accused of defeat device use on 500X 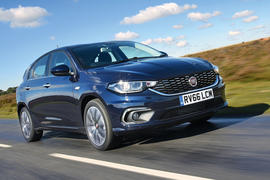 FCA should abandon FIAT petrol engines as well and use Mazda engines instead. The FIAT 124 engine is a good explanation.

Why? The 1.4 turbo in the 124 at least gives a real differentiation between it and the MX5.

FCA should abandon FIAT petrol engines as well and use Mazda engines instead. The FIAT 124 engine is a good explanation.

Why on earth would they want to do that? The Multiair unit in the 124 is a superb little engine.

While VW must bear most of the blame for reduction in demand for diesel engines, the other culprit is the mainstream media and its hysterical and inaccurate reporting of the issue.  Less diesel means more CO2 - arguably more important than the current fashion of focusing on NOx.  Plus it is a problem that will fix itself as old diesels drop out of the fleet and are replaced by Euro 6 diesels which have low CO2 and NOx emissions.

Exactly, seems a silly move, they should move to diesel and petrol hybrids then electric only oner the next 10 - 15 years. I can see why they wouldnt develop any new engines, but dropping the current ones seems silly, all that will happen is their sales will drop and CO2 levels will go up, so its loose, loose all round, all because of a few headlines.

Exactly, seems a silly move, they should move to diesel and petrol hybrids then electric only oner the next 10 - 15 years. I can see why they wouldnt develop any new engines, but dropping the current ones seems silly, all that will happen is their sales will drop and CO2 levels will go up, so its loose, loose all round, all because of a few headlines.

Looking at the timescales I would guess that:

1: Their current diesel range is due a major update or total redesign by 2022.

2: They would have to comit now to engineering development and tooling up future factories now to get a new range of diesels in by 2022. Like costs $ billions.

3: Those new diesels would have to sell strongly for 5-10 years to pay back the investment.

4: If diesels sell strongly into the next decade they will miss out on some sales, if diesels are banned or sales fall off a cliff and they are left with a massive debt and a worthless asset. This is much worse.

5: If diesels are still popular by 2020, they can look at eeking some more life out of their current engines or buy them off someone else as there will almost certianly be an oversupply.

6: They will be much better off making desirable cars and spending their limited money of electric and petrol hybrid technologies.

Hard to believe there's a Panda, Mito, 500 in the diesel list!

Cant see why, theyve had the

Oh yeah and its your "opinion

Oh yeah and its your "opinion" that no one else is allowed to like em.

Oh yeah and its your "opinion" that no one else is allowed to like em.

Who said anything about like or dislike? I just expressed a surprize there was a Diesel MITO etc.

Calm down and go for drive in your Diesel Panda, you're making a fool of yourself.