BACK TO ALL NEWS
Currently reading: New 2019 Audi RS7 Sportback to break 600bhp barrier
UP NEXT
Alfa Romeo aims to double production with new image

Audi is developing its new Audi RS7 Sportback ahead of a 2019 launch, with the flagship five-door coupé due to put out more than 600bhp.

Prototypes have been spotted testing on German roads with styling details in line with other Audi Sport RS models, including enlarged honeycomb air intakes at the front, bigger wheels and the trademark oval-tipped twin exhausts at the rear.

Revealed: We've seen the new RS7 at Frankfurt. Check it out here.

Set to be built alongside the forthcoming RS6 Avant at Audi's Neckarsulm plant in Germany, the RS7 Sportback will feature the latest 4.0-litre twin-turbocharged petrol V8 found in the Porsche Panamera Turbo and Lamborghini Urus SUV. The engines power output is expected to be around 605bhp, which is 53bhp more than the outgoing RS7 and 8bhp more than the run-out RS7 Performance. A torque figure of 590lb ft is also cited by Audi insiders. 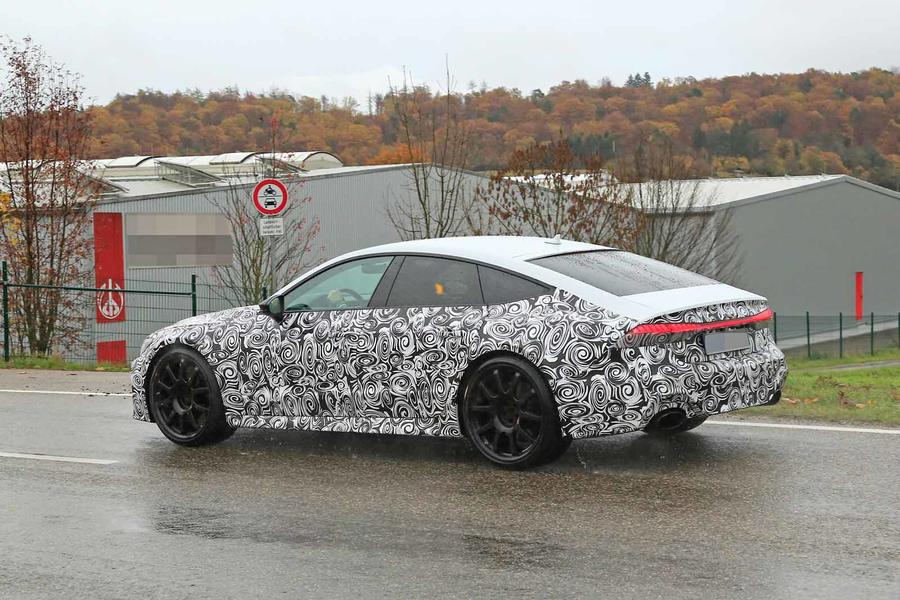 That gives the RS7 the edge in the output race against the 600bhp BMW M5, although the 604bhp Mercedes-AMG E63 S still produces more torque, at 627lb ft.

As before, drive will go through all four wheels via an eight-speed automatic gearbox and Torsen torque-sensing four-wheel drive system. To aid performance and handling further, the Audi A7's second-generation MLB architecture will bring a weight reduction of around 80kg over the outgoing RS7.

The resulting 0-62mph time is set to come down to around the 3.5sec mark, while the derestricted top speed will top 190mph. Cylinder deactivation tech will also ensure incremental improvements in quoted emissions and fuel economy.

Before the full-fat RS7 arrives, an Audi S7 is expected to warm up the A7 range in mid-2019. It will trade in the old V8 for a twin-turbocharged 2.9-litre V6, shared with the RS4 Avant, delivering around 450bhp. The engine is significantly lighter than the eight-cylinder unit, which should aid agility, while it should also be more efficient.

dragster, with few if any mitigating factors

dragster, with few if any mitigating factors

Times have changed, but you are still stuck in the past.

Is there a duller story out there?

And how could it possibly only do 190 mph de-restricted?

Judging by the size of those Wheels and the overall shape, the impression you get is?...this is a heavy Car, I’d have thought that Audi would be leading the way with lighter stronger components and Bodywork, but, alas, this is going to be another Tank with, and this isn’t just my opinion, numb steering....

Judging by the size of those Wheels and the overall shape, the impression you get is?...this is a heavy Car, I’d have thought that Audi would be leading the way with lighter stronger components and Bodywork, but, alas, this is going to be another Tank with, and this isn’t just my opinion, numb steering....

You shouldn't worry too much about any of this cars driving characteristics, or indeed the size/weight of it...you can't afford it and you will never own it.