BACK TO ALL NEWS
Currently reading: Cupra previews interior of first EV ahead of Frankfurt reveal
UP NEXT
Maserati reveals hardcore Trofeo Ghibli and Quattroporte saloons

Cupra previews interior of first EV ahead of Frankfurt reveal

Cupra will reveal its first fully electric vehicle in concept form at this year’s Frankfurt motor show, and has previewed its interior design in a new image.

The company says the cabin will combine "materials and technology to deliver a driving environment like no other vehicle", with angular lines and carbonfibre-aping trim continuing the model's sporty exterior design theme.

Cupra's new EV, which it says will combine elements of a sports coupé and an SUV, will feature a sports-style steering wheel with a prominent pointed centre. Wheel-mounted ignition and driving mode controls, as well as a G-meter and sharpened door mirror design, hint at the model's performance ambitions.

The Seat sub-brand, which is focused on premium performance cars, showed its first standalone car, the Formentor SUV-coupé, earlier this year. It will follow that up with the electric concept car, which will preview its first production EV.

Cupra previously released a single preview image of the concept's exterior, saying the car will unite “the silhouette of a four-door crossover with the presence of an SUV and the sleekness of a sports coupé”. It follows a teaser video, which gave glimpses of the headlight design. 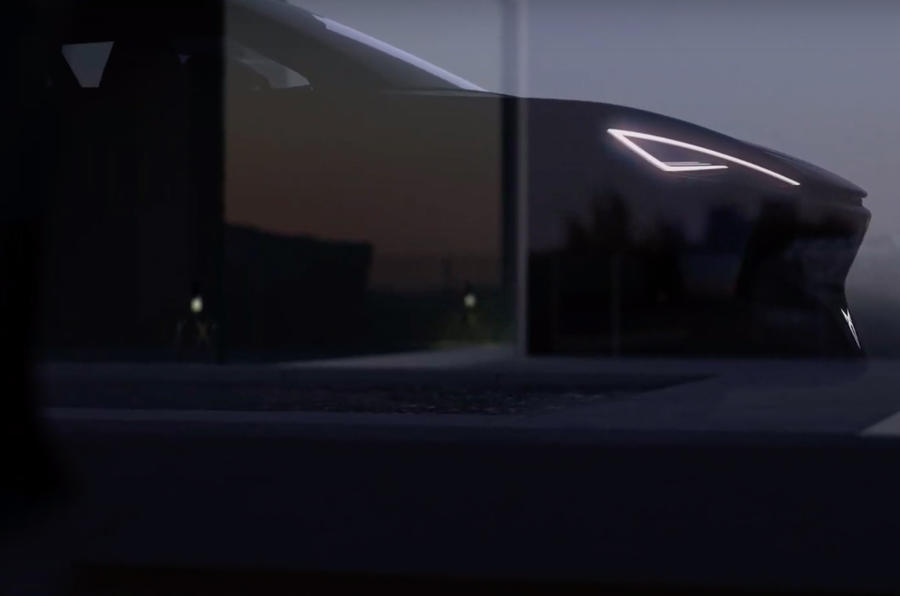 Although Cupra has not confirmed details of the new concept, it will be based on the Volkswagen Group’s MEB electric platform, which will be used for parent firm Seat’s el-Born EV. It is likely to be a more extreme version of that car.

That would match how the Formentor, which will be offered with a plug-in hybrid powertrain, is a heavily reworked coupé version of the Ateca SUV.

When Seat turned Cupra into a standalone brand last year, bosses said it would act as a “technological flagship”, including in electrified powertrains. Cupra describes the new concept as “a vision of the future” of the brand.

The EV concept has been termed a “high-performance vehicle”, suggesting it could get one of the most powerful motor options available for the new MEB platform – likely to feature a motor on each axle, offering four-wheel drive.

Cupra takes its name from Seat’s long-running line of performance models, although the brand has a wider focus on attracting higher-end customers who would not usually consider a Seat. That's why the firm has so far focused on SUVs, starting with the reworked Cupra Ateca and the Formentor.

Seat is aiming for Cupra to offer seven models by 2020 – a mixture of standalone machines and high-performance versions of Seat models, including the current Cupra Leon.

Some of your posts have been pointed out previously...you are unable to differentiate between cheap and VFM and in this one alone, you have really gone to town with mixing up metaphors...sort yourself out.

Seat were known for doing cheap EE versions of VW’s previous gen cars, they sold a lot too, now they’re seen as a stand alone makers producing some as good or better than VW, this vehicle looks SUV to me and this is where the markets at selling us persuading us we should all be driving one, what I’m afraid of is is this car being a bit pricy for a Seat,now, what’s wrong with that opinion..?

Some of your posts have been pointed out previously...you are unable to differentiate between cheap and VFM and in this one alone, you have really gone to town with mixing up metaphors...sort yourself out.

Whilst I agree SEAT has always been value for money and I've always thought better vfm than Skoda which is often cheaper but either less well equipped or a bit more basic inside, this we noticed when buying our Mii, however I don't think SEAT has ever had a slice of the premium cake as like VW they are not a premium brand.

But this is cupra branded which like DS is trying to be a premium brand so pricing will likely be higher.

Whilst there isn't much to

Whilst there isn't much to see I do like the LED strip tail light incorporating the cupra badge, looks impressive to me as does the overall profile shape which you can just about make out.

Has an extremely hardcore

Has an extremely hardcore look with all those scarce surfaces and bare (fake) carbon fibre. Quite a cool idea for a premium car, but that'll never make it into the final car. It'll all be covered up with some nice plastic.

I wonder how many concepts have been spoiled by safety regulations.