BACK TO ALL NEWS
Currently reading: Mercedes-Benz G-Class interior revealed ahead of January launch
UP NEXT
Mercedes CEO: Maybach S-Class to take brand to "the next level"

Mercedes-Benz has revealed the interior of its new G-Class off-roader, which has undergone the most significant reinvention of its four-decade lifespan to provide greater comfort, technology and usable space for occupants while not abandoning its utilitarian origins.

Full details of the new G-Class - which has been four years in development at Mercedes’ standalone G facility in Graz, Austria, and is codenamed ‘W464’ – will be fully unveiled at the Detroit motor show in mid-January, but the familiar boxy shape of the current vehicle will be retained.

However, the German manufacturer has afforded an early look at the five-seater’s interior, where some of the most significant revisions have been made. As well as incorporating much of the technology and underlying electronic architecture from the latest E-Class, Mercedes has retained many of the G-Class’s iconic design features. The overhauled G-Class will be wider than the current model, and an increased wheelbase and improved packaging of major components have liberated a considerable amount of additional space inside. 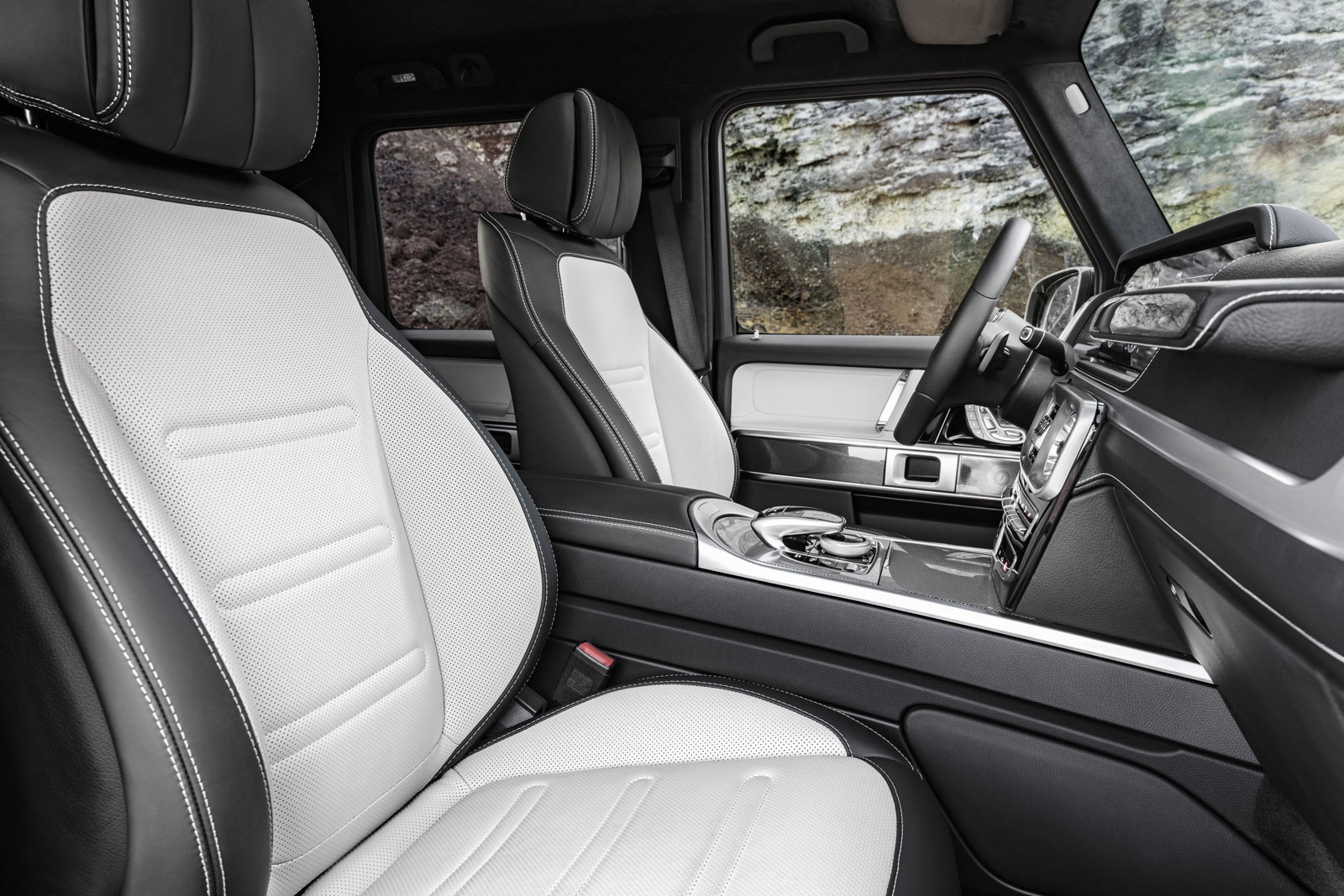 Rear passenger space – an area that was criticised in the current G-Class – is said to have increased by 150mm, with approximately 40mm of that being freed up by a longer wheelbase. The driver and front passenger benefit from an additional 38mm compared with the existing model. Shoulder and elbow room are up by 38mm and 68mm respectively in the front and by 27mm and 56mm respectively for rear occupants.

Although the new G-Class retains its predecessor’s upright windscreen and square-jawed proportions, the seating position is slightly more car-like in the new model. “In the outgoing car, it is more like you sit on the car, but now you sit in it,” said Oliver Metzger, G-Class design engineering chief.

Very few parts have been carried over from the outgoing G-Class. Among those that do remain are the nozzle of the headlight washer, the cover for the spare wheel – still mounted on the side-hinged rear door – and the door handles.

The influence of Mercedes’ saloons can be seen on the dashboard and centre console, most notably on the multi-function steering wheel, which features touch-sensitive controls for the infotainment system, an electric handbrake and the gear selector stalk mounted on the steering column, as opposed to the more traditional gearshift in the centre console. 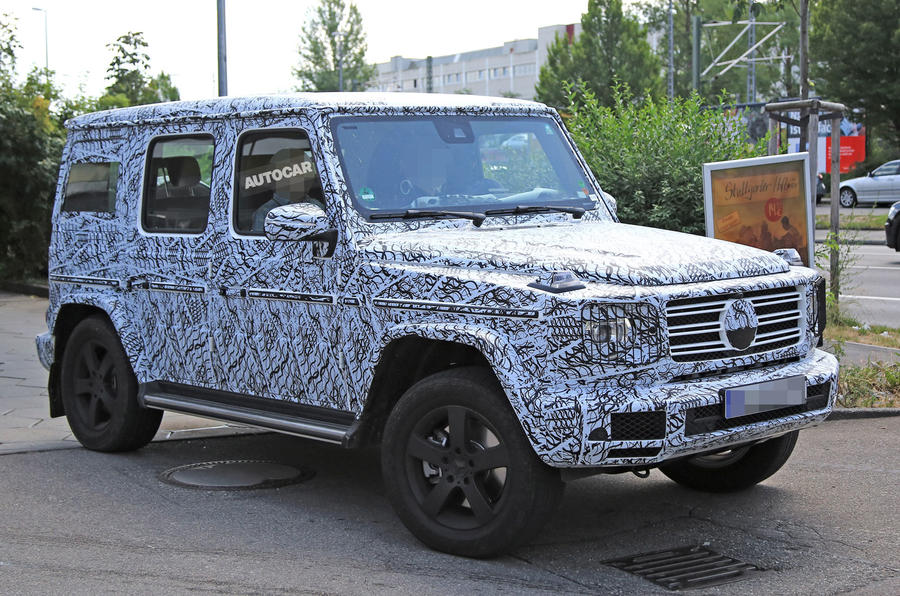 It brings the G-Class in line with other Mercedes models equipped with automatic transmissions and opens up space on the centre console for the touchpad and rotary infotainment controller, as well as additional stowage areas. An analogue instrument panel comes as standard, but a ‘virtual’ display is available as an option.

Design themes from the car’s exterior are mirrored inside, said Metzger: “The shape of the air vent is the same as the round headlight sitting in the front grille and the shape of the audio speaker is very similar to the indicator on the front bumper.”

The rear seats can be tilted to nine different angles, meaning they can be left upright to optimise stowage space in the boot or reclined for greater rear occupant comfort over long journeys. The rear bench also folds flat to increase the size of the luggage compartment. The current G-Class’s luggage capacity of 699 litres with the rear bench up is likely to be surpassed, although Mercedes is keeping the exact figure under wraps until the official reveal next month.

Although the new G-Class will retain its forebears’ off-road ability – it has undergone extensive testing on the Schöckl, the gruelling mountain close to the Graz factory – it will also be more luxurious and offer greater potential for personalisation through optional equipment packages and an AMG Line trim level.

Following its Detroit unveiling, the new G-Class is expected to go on sale in Britain next summer at a price slightly above today’s entry level of £92,070. The 4x4 enjoyed its most successful year yet in 2016, when almost 20,000 were sold globally. 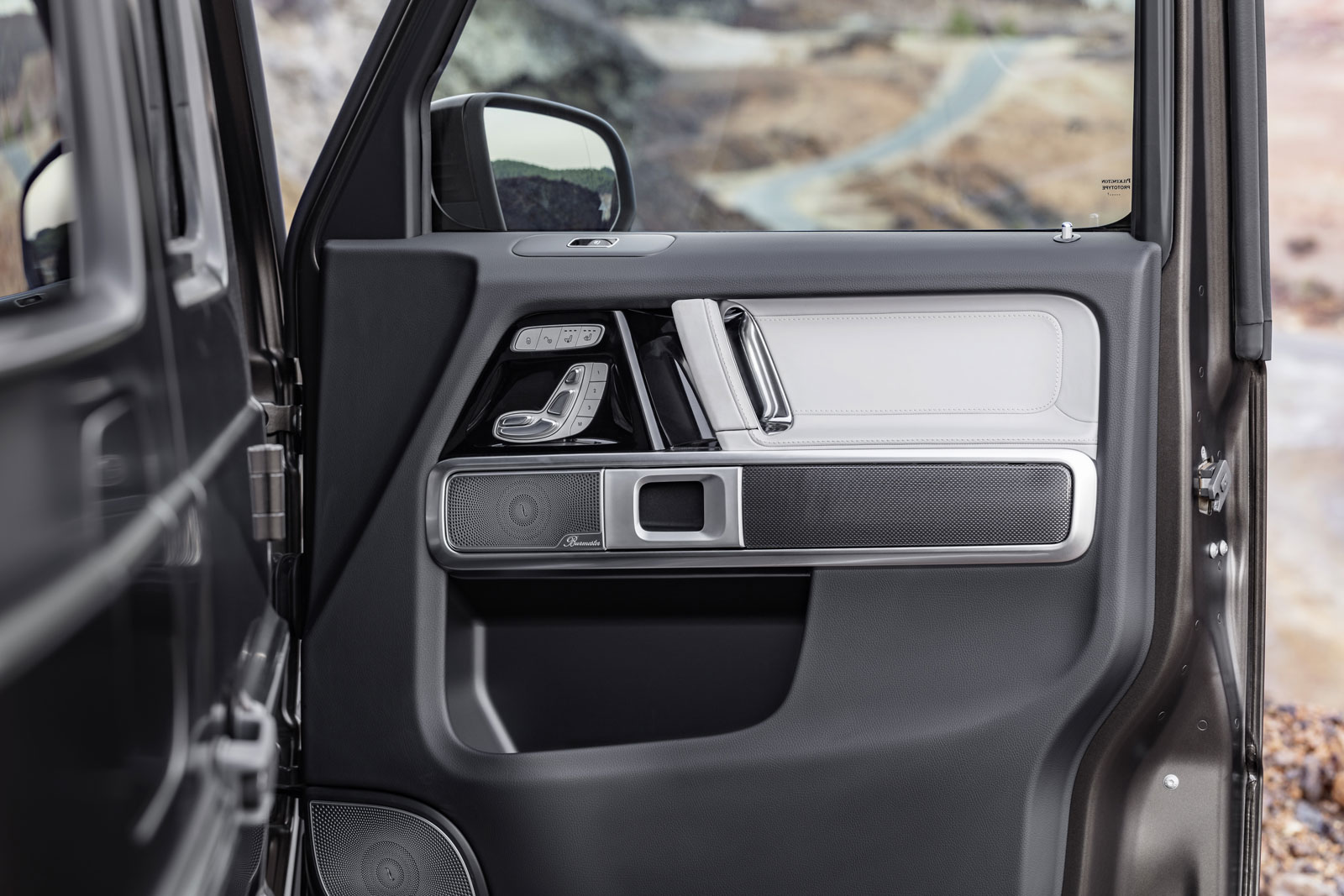 Why the Mercedes G-Class outlived the Land Rover Defender

How difficult was it to combine iconic design features within a modern interior?

“It was a tough challenge, but also a fun one. There were not too many trade-offs, where we had to leave out one thing to get the other in. Keeping the iconic features from the current G-Class was the top priority, hence things like the positioning of the three differential lock buttons [on the dashboard]. Older generations of the G-Class had the buttons exactly in this position. And then also the passenger grab handle on the dashboard has been redesigned – it is not only a design feature, it is really necessary when you are off-roading.”

How do you go about redesigning a handle?

“It was not a case of copy and paste from the old G-Class. First of all, we had to bring a little bit more to the dashboard than on the old car because of new passenger safety requirements. There was a lot of engineering going on to ensure we could actually keep the handle because it is so iconic for our G-Class. Also behind the dashboard everything is new, so we had to put all the fitment points in different places.”

How much of an advantage were the larger interior dimensions?

“We changed the whole ergonomic layout of the car. The old car was limited in terms of how far you could push the front seat backwards. I think almost everybody will find a seating position in which they are comfortable and which is also good for long-distance drives. With the old car, it was almost impossible to access the rear seats. It was very important for us to have enough space in the new G-Class’s body-in-white to have easy entry and egress.”

The logic and charm of the G

12 December 2017
The logic and charm of the G is quite beyond the comprehension of Land Rover.

Just open and close a door and you understand this car instantly.

stopped being funny 10 years ago.

stopped being funny 10 years ago.

Has a tough image

Which owners seem to like. Rugged etc. If they go too posh, it will over time lose the toughness vibe.

Check out the new disco and velar for details. Mmmm, yummy premium soft touch premiumness upmarkety. Nice green wellies to go with it at the summer festival, it's so earthy. I was at the country club the other day and thank heavens I was in the velar/g wagon/Range Rover (delete as applicable), there was snow in the fields and I saw some mud on the road. I think maybe a pheasant in the distance too. Blasted through that, and made short work of the nicely laid drive right up to my premium earth pod for my detox. Back to London on Sunday, can't miss the little ones violin recital, the curbs in Dulwich have to be seen to be believed.

Pretty though for celeb types. Sells to a particular group. Actually, sells well. Or does it? See discount article.

Hmm, I am really out of touch and have a problem. I'll have a lie down now.

While it's great that Mercedes have found a way to keep the iconic body of it's classic G Class, for all it's sumptuous interior and extra space, what about the crashworthiness? That dash isn't very deep and those doors still look very thin, so if there are few parts carried over they might as well have produced a safer, all new body as well. A 1979 body structure can never be as safe as the latest 2018 tech versions surely. An NCAP test would be very interesting to see, then maybe Landrover will be proven right in their approach to an updated Defender. Even BMW had to bite the bullet in the end with the classic Mini.

...exterior as we can make out, it does not not seem that it matches the revealed interior, IMHO! If one were not TOLD that these interior pictures, belong to the lightly camouflaged vehicle in the exterior photos, I believe they would hard pressed to see the connection one to the other. And with the G-class sitting at the top of Mercedes-Benz SUV food chain, why does it share its interior with the E-class and not the S-Class? Would the Ranger Rover look to compete against this new G-Class with the interior appointment level of the Jaguar XF?