Volkswagen has developed a robot that can charge electric cars autonomously - effectively allowing any parking space to become a charging point.

The mobile charging system is comprised of two units: a robot and an energy storage device.

The robot is summoned by drivers via a smartphone app or through a connected car system and tows the storage device with it to a vehicle. The robot is then capable of opening a charging port and connecting a plug. It can then go and charge other vehicles, returning to collect the energy storage device once the charging process is completed.

Each ‘battery wagon’ contains 25kWh of power and is capable of DC fast-charging at up to 50kW. The robot is fitted with a range of scanners and sensors to ensure it can move freely around the car park. 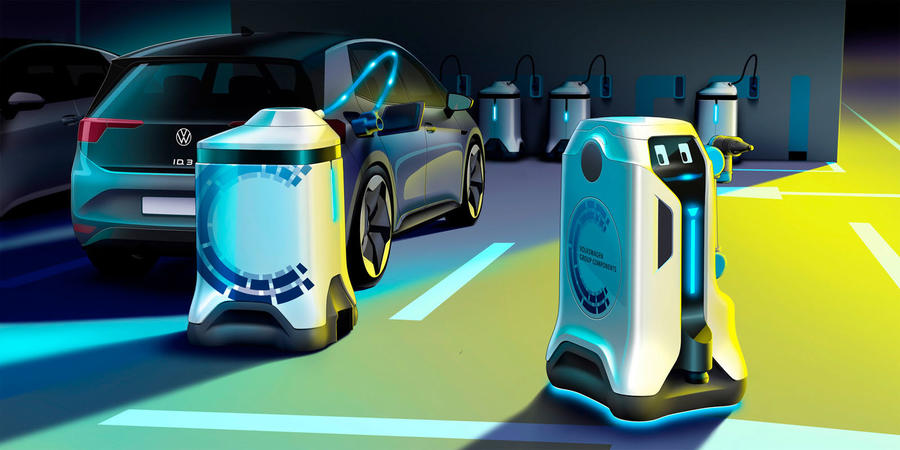 Mark Möller, the head of the Volkswagen Group Components division, said the system “will spark a revolution” because it can “bring the charging infrastructure to the car and not the other way around.”

The system is designed for use in a range of car parks, with Möller claiming it has “enormous economic potential” by reducing the need for fixed charging points to be installed. It would also end the problem of charging bays being blocked by charged or non-electric cars.

The system is currently “a visionary prototype”, but Volkswagen claims it could be “made into reality quite quickly”. It added that is has not set a date for a market launch yet.

Volkswagen is working on a range of solutions for electric charges. It is one of the firms behind the Ionity 350kW charging network and has previously shown a prototype of a portable charging station.

Maybe the BMW?, ok, all cars would have to change to the BMW system, but it would mean, if embedded in the space and every space was so equipped, then it's a neater solution.

Why not have sprung /

Why not have sprung / retractable wires dangling from the ceiling or poles which can then be pulled towards any one of a number of spaces within a given radius for charging. Must a a cheaper option than robots.
MrYoung 27 December 2019

So it's about convience to the end user and getting them to pay more.And it will cost more, because they'll have to install charging points anyway (for the robots and batteries), and the user will have to pay additional robots full of sensors that drags around a battery that isn't big enough to fully charge a car and is far also far less effiecient than a fixed charging point.And no doubt the robot itself will need charging too.

I don't think environmental impact has been considered in this presentation.This will require a lot more materials for batteries and circuitry than if we just stuck with fixed charging points.Charging a car via a fixed charging point will be alot more effiecient too as there wont be any losses by charging the robots and their dinky batteries.

Yeah, sure, it's a nice idea and convient for the end user, but I think it's a waste of materials and electrical energy.