BACK TO ALL NEWS
Currently reading: Rover reinvents the Mini - Throwback Thursday
UP NEXT
2023 Pagani C10 to be revealed on 12 September

Eagle-eyed Mini enthusiast Neil Burgess recently noted that the Mini Vision Next 100 concept, which was unveiled to hint at the company’s future direction, bears a passing resemblance to a vehicle from its recent past: the ACV30 concept car.

Anniversary Concept Vehicle 30 was sprung on an unsuspecting world to mark the 30th anniversary of Mini’s victory on the Monte Carlo Rally, with Rover using the 1997 running of the classic event to reveal the car.

The look of the ACV30, which was badged as a Mini Cooper S, came from one of the abandoned styling proposals for the new Mini, which was then still four years from launch.

The ACV30 showed that the hallmark design elements of the classic Mini, such as the hexagonal radiator grille and large circular headlights, could be carried over into a 21st-century concept. However, the bulbous wheel arches and growth in size alienated as many Mini enthusiasts as they excited. Nevertheless, some elements of the design – the work of Adrian van Hooydonk and Frank Stephenson – did make their way on to the first BMW Mini.

Most notably, the ACV30 gave away the new hatchback boot format for the forthcoming Mini and featured a floating roof design and dramatic wraparound glazing.

“The ACV30 is designed to encapsulate the spirit of Mini past in a contemporary style, with detailing representative of future design thinking,” said Rover at the time.

It also had some distinctive features, such as competition seats and harnesses, rollcage struts and a large, round central instrumentation screen. 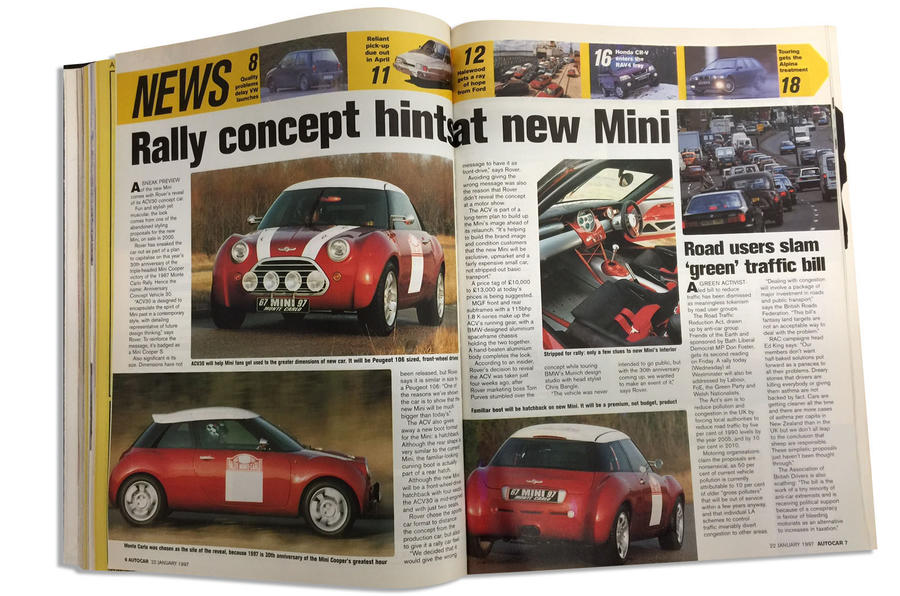 It was already known that the next Mini would be a larger front-drive car with four seats, but the ACV30 used front and rear subframes from the MG F, with a mid-mounted 115bhp 1.8 K-series engine and a BMW-designed aluminium spaceframe chassis holding the two together. A hand-beaten, lightweight aluminium body and two-seat layout completed the motorsport feel, complete with the red-with-white-roof livery that adorned the Monte Carlo winner in 1967.

Rover chose the sports car format to distance the concept from the production car, but also to give it a rally car feel. “We decided that it would give the wrong message to have it as frontwheel drive,” the company said.

The car was part of a long-term plan to build up the Mini’s image ahead of its relaunch in the early 21st century. “It’s helping to build the brand image and condition customers that the new Mini will be exclusive, upmarket and a fairly expensive small car, not stripped-out, basic transport,” explained Rover.

A company insider told Autocar at the time that Rover’s decision to reveal the ACV30 was taken just four weeks prior to the 1997 Monte Carlo Rally, after Rover marketing boss Tom Purves stumbled over the concept while touring BMW’s Munich design studio with head stylist Chris Bangle.

“The vehicle was never intended to go public, but with the 30th anniversary of the Monte Carlo Rally victory coming up, we wanted to make a real event of it,” said Rover.

BMW is still keen on the ACV30, wheeling it out as recently as the Ville d’Este concours at Lake Como in May.

Even if the ACV30 didn’t gain company approval to become the shape of BMW’s first Mini, it did start the ongoing process of pushing perceptions of what a Mini could be. Indeed, the manufacturer went on to make two-seat production models in the shape of the Coupé and Roadster.

I can't say I like it, or liked it, but I think it was a fantastic evolution concept over the original Mini design.

Having spent a portion of my Motor Trade career working with MINI I'm not sure that the criticism they receive is completely fair. Sure, the less said about the Countryman the better, but as far as the Hatch goes, I feel as if is a perfect example of a small 'premium' car on the market.

I always had mixed feelings about this car. At the front it harked back to the bug-eyed Sprite that was the Mini's contemporary and a bit odd on a small saloon. However, it was cheeky and offered some hope that a new Mini wouldn't be too much of a copy of the original. Sadly, nearly 20 years later, all we have are Minis with a severe case of middle-aged spread, like many of its owners!
Richard H 14 July 2016

I would have bought one!