BACK TO ALL NEWS
Currently reading: Car racing on the Isle of Man - Throwback Thursday
UP NEXT
Driving the legends of the secret Mercedes archive

Car racing on the Isle of Man - Throwback Thursday

Will the RAC TT ever return to its birthplace, the Isle of Man? In 1965, they hoped so
Share
Open gallery
Close
Share story

The recent heroics performed by Mark Higgins in smashing the Isle of Man TT circuit lap record for fourwheeled vehicles evoked memories of the course’s origin as the venue for the RAC Tourist Trophy car race in 1905.

In that year the TT comprised four laps of a rough 52-mile circuit around the island, and the winner averaged 33.9mph. If that seems modest in light of Higgins’s 128.7mph lap, bear in mind that the race was for full fourseat touring cars, with each having to average at least 23 miles per gallon.

The final car TT was held on the Isle of Man in 1922, and on the last three occasions a 37-mile course, recognisable as the one used by motorcycles today, was adopted. The TT then lived a nomadic life, moving from Ards to Donington Park and Dundrod, where it remained until a serious accident forced a rethink on the safety of road courses, shifting instead to purpose-built tracks such as Goodwood and Oulton Park.

In 1965, following a visit to the Isle of Man, former Formula 1 driver Tony Brooks wrote in Autocar that the time was ripe for the course to be reconsidered as a venue for the RAC TT.

“A classic event must be held on a classic circuit, one that has characteristics peculiarly its own and provides a unique and rigorous test of both man and machine,” he wrote.

“This is not a criticism of Oulton Park, but the TT merits a circuit which is quite different, one that could rival the fascinating Targa Florio, the last of the European events with the flavour of original town-to-town motor racing.

“The Isle of Man course is such a circuit, and what more natural than for the TT to return to its birthplace?”

Brooks believed that improvements to the course over the years had made it possible for cars to race on it.

“Most of the course has a road surface superior to all but the very recently surfaced circuits,” he continued. “Where this is not the case, the road is just irregular enough to show which cars really do hold the road.

“The width of the course is sufficient for cars to overtake in safety, although it would be essential for competitors to be sent off at, say, one-minute intervals, if only to give spectators something to watch on all parts of the circuit.

The six-time grand prix winner was adamant that the course “would be a strong contender for the title of the finest ‘driver circuit’ in the world” but was also well aware of the challenges of hosting a high-profile event such as the RAC TT.

“Spectator protection that may be adequate for skidding motorcycles is inadequate for cars, and controlling spectators on a circuit of such a length is not easy,” he wrote. “Another difficulty would be marshalling the course. Many more marshals than for motorcycle racing would be necessary.

“No one could deny that putting the TT back on the Isle of Man would be hard work, but the premier motor racing country should have at least one event a year that rivals in stature the classic races of our European competitors.”

As tantalising as Brooks’s idea was, it never reached fruition; these days the Tourist Trophy is awarded to the winner of the World Endurance Championship race at Silverstone. It leaves the TT course largely out of the reach of performance cars – unless Higgins and Subaru pay another visit. 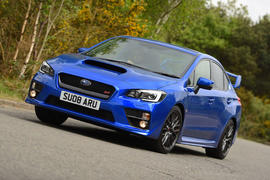